Where Have The Trout Gone

Since the beginning of September there had been a marked change in my fishing. For some reason the trout have been very thin on the ground compared to earlier in the season. Grayling have been present since before their season started and on certain beats their presence has increased significantly more recently; one day when fishing with Tom we had just over thirty fish between us and grayling accounted for a good three quarters of the total. It's not just me that has experienced this, Tom and Steve have both found that trout have been conspicuously absent in the beats they have fished.

One area that has been bucking the trend is the coarse fishery beats lower down the river. Trout aren't especially abundant although they have been making a bigger proportion of numbers. I spent a short afternoon after work in the middle of October after Tom had reported a good number of quality fish.

Arriving at the river I was greeted by superb conditions, recent rain had revitalised the river, giving it a slight tinge and looking like it was later in the year - more winter like. Most of the weed had disappeared leaving a clear bottom and with the increased flow it really looked promising.

Having parked at the top end of the fishery I walked downstream to where I wanted to start. On the way down I kept an eye on the river trying to spot fish as I walked past, and although the clarity wasn't perfect, I was able to spot a good fish holding station over a bright patch of gravel in a shallow pacey run. I made a mental note of its location and continued on my way.

Arriving at the bottom of a relatively long run, I eased into the river and waded across to the far side standing in knee deep water some twenty yards downstream of where I would eventually start fishing. Setting up my eight foot four weight I tackled up fishing the duo (klink&dink) with a copper-bead pheasant tail nymph suspended below my usual Adams Klinkhamer. This set up allowed me to cover both options as I have found that the fish will take both flies, perhaps not always equally, but it is an effective method when used in the right circumstance.

I began working toward the run I wanted to fish, the klink dibbed lots as small minnows and grayling attempted to take both fly. I did manage to hook a small grayling on the PTN, it's great to see a healthy number of small grayling; the population appears to be climbing again after a slump in numbers.

I worked up the run and in all honesty I struggled to catch the numbers of fish this part of the river normally yealds. I missed a couple of rises to the klink and a couple more fish came off before I could land them. I was left feeling pretty frustrated although I caught some fish, a trout and three grayling in total, but far fewer than I would normally expect. 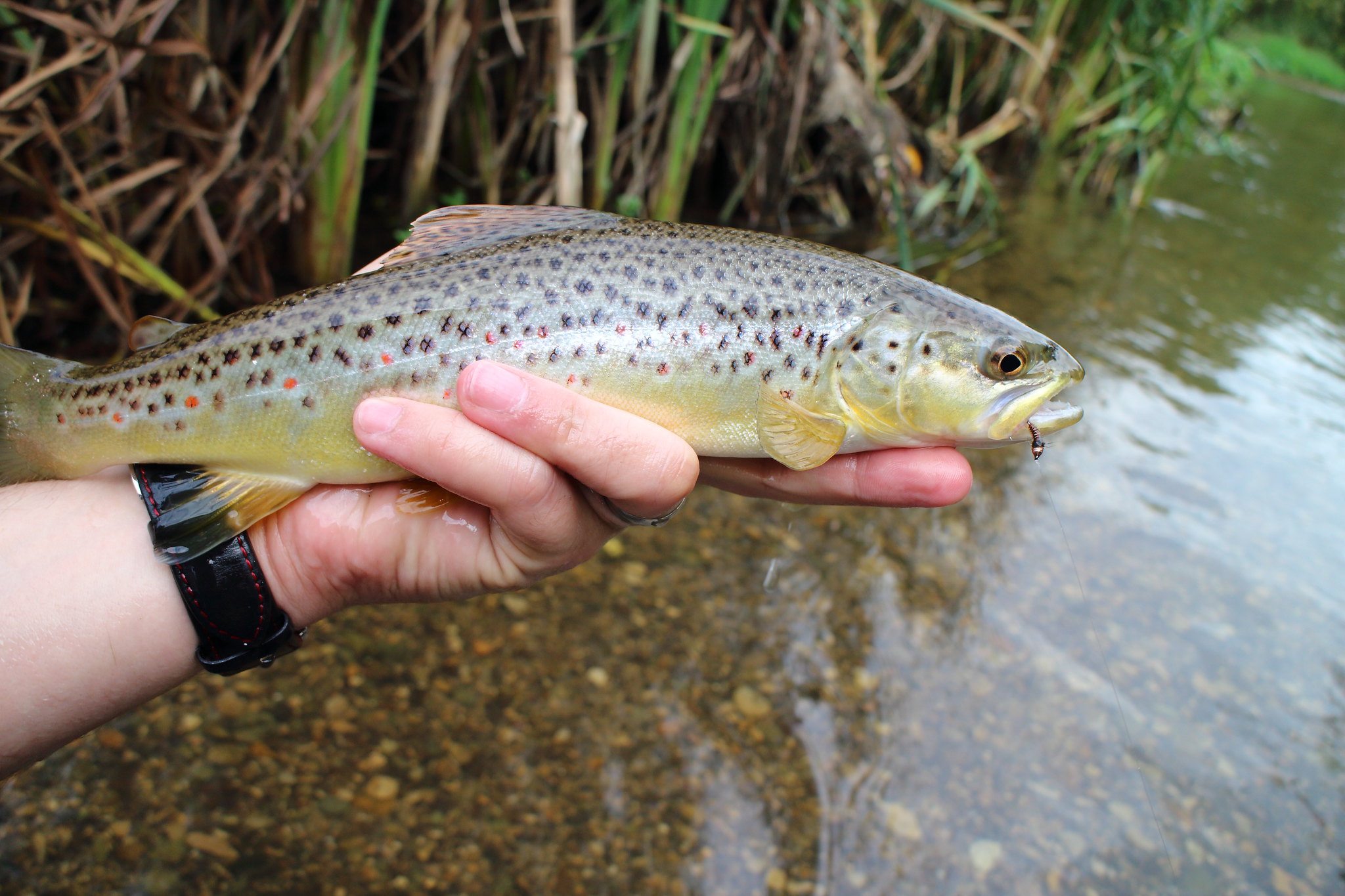 Moving upstream I stopped at a short stretch of fast water which is essentially a ford for off-road and farm vehicles. I left after a short while having caught a trout from the top and a grayling on the PTN. I was starting to get somewhere and I can never complain when the dreaded blank is in the distant past. Walking further upstream I bypassed a lot of empty water devoid of fish before reaching the area I had previously spotted the good fish on the way down. 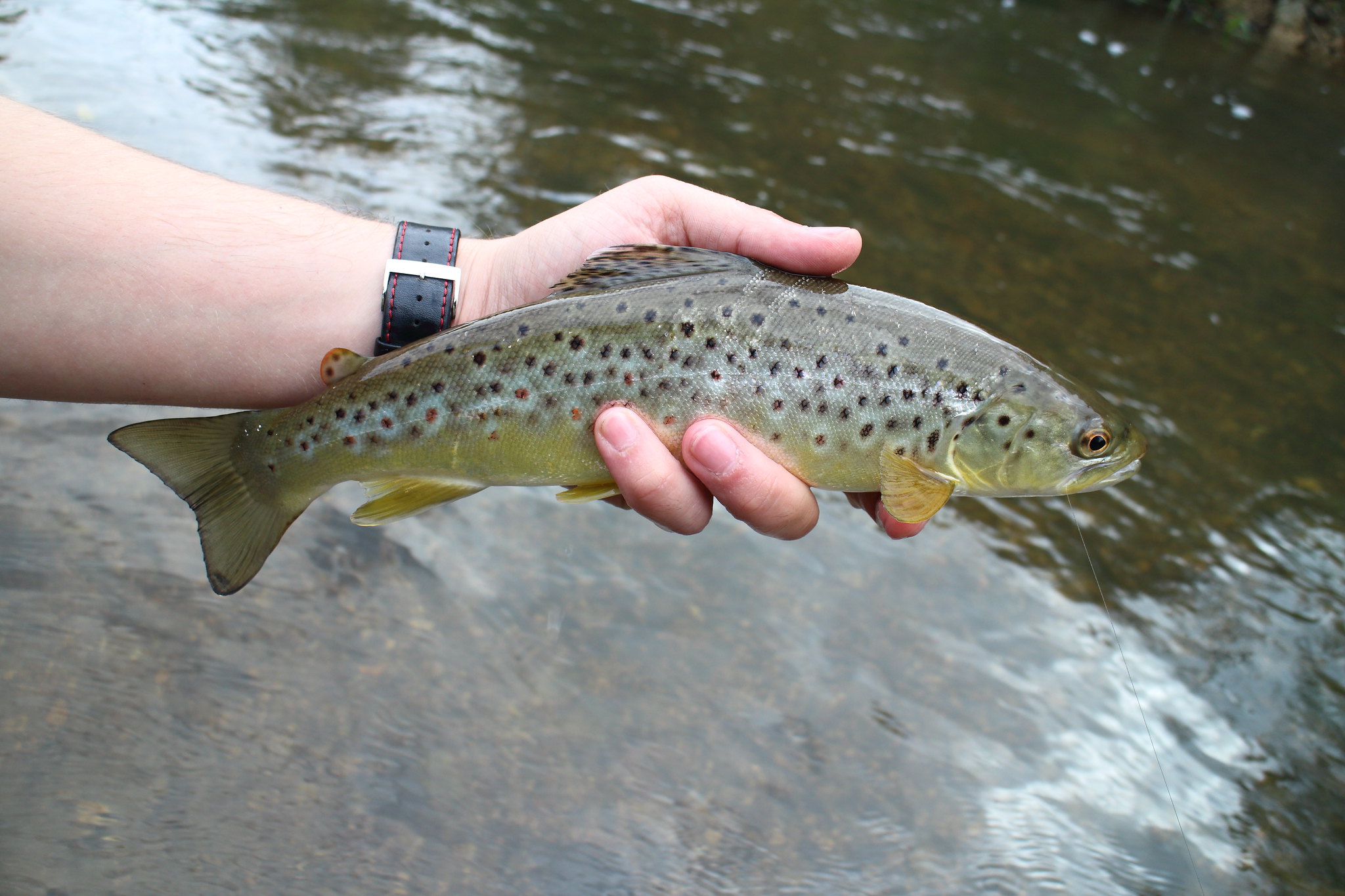 I climbed down the bank probably forty yards below where I thought the fish was and spent fifteen minutes working upstream without a touch. Being aware I had reached the point where I thought the trout was, the klink shot under within seconds after landing and a firm lift saw me attached to something substantial. Very quickly I knew the fish was good, having it cartwheel in front of me repeatedly only confirmed this and it tore off downstream in several long runs, cartwheeling on its way. Thankfully the firm even bottom helped as I tried my best to follow quickly in waist deep water, the fish took me back downstream to at least where I started if not further. I was relieved when I safely secured the fish in the net. 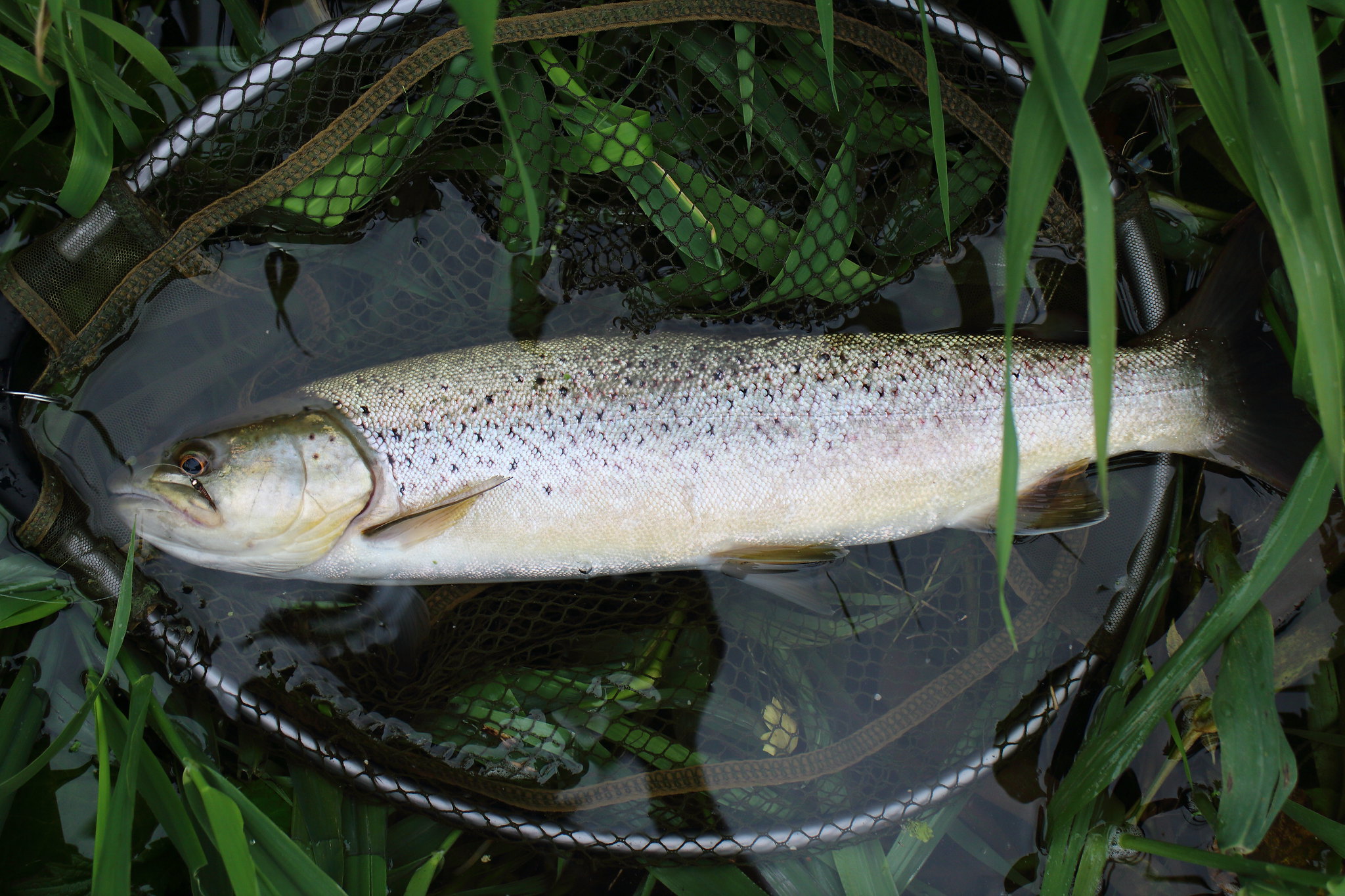 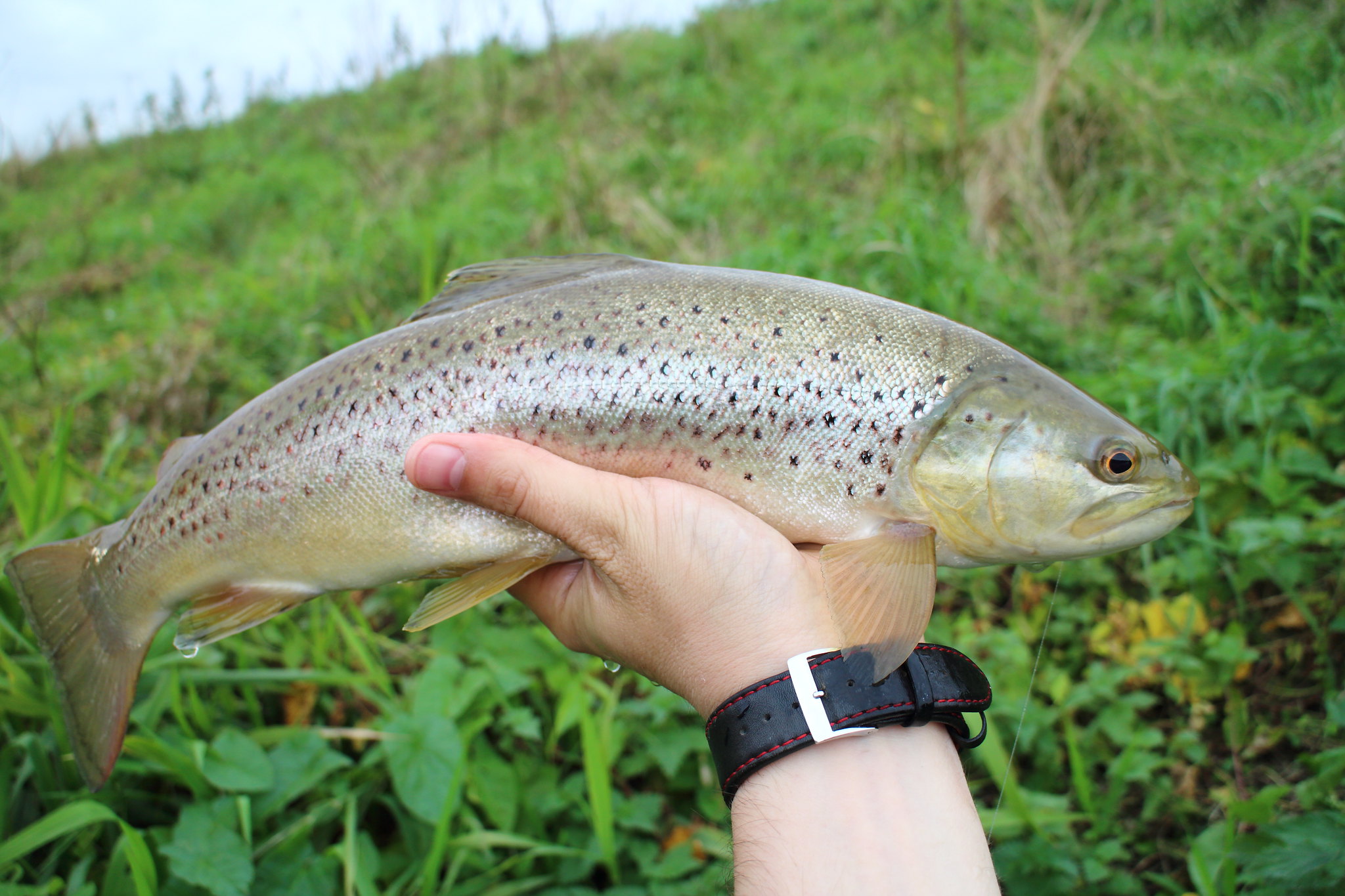 Allowing the fish to recover in the net as I got the camera switched on and ready, a few pictures where taken and a quick measure before I released it. Another 17" trout this season. it was a different fish to the one I caught on the Utah Killer Bug that was captured on film. I could have happily finished there but there was still more water to fish and it wasn't home time yet. 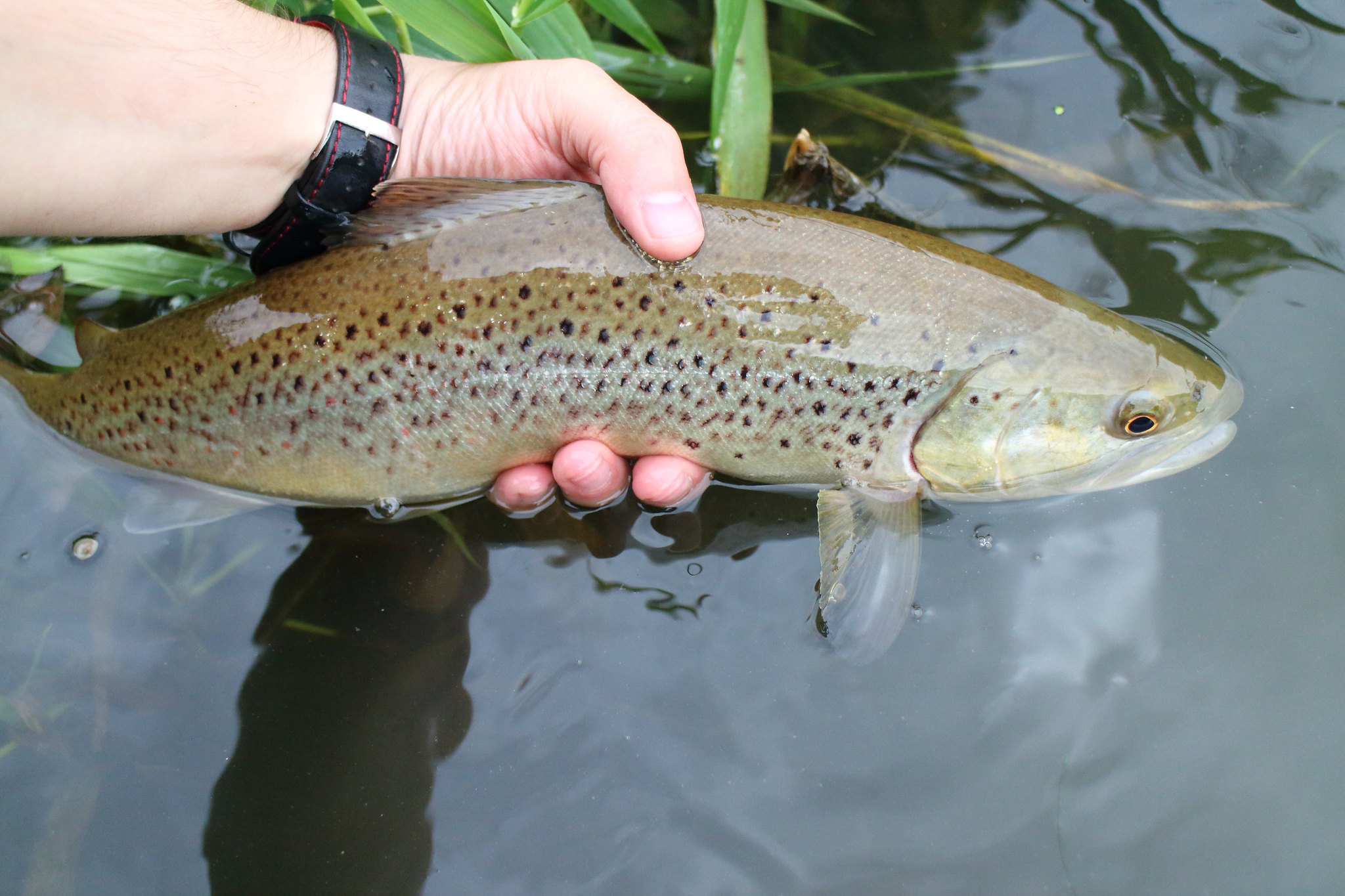 A very brief walk upstream again, I slipped into the river just below a bend, above the bend was the large gravel patch that held a number of very large trout at the beginning of the season. On the way down I had spotted a few fish on the gravel bar as well as a couple of rises slightly downstream from there.

Still using the same set up and flies I worked up towards the bend catching a trout before reaching it. Round the bend and up to the gravel patch I caught a further four trout up to 14", I was really pleased with how many trout I had caught, especially with the relative lack of truttas recently and from a coarse section of the river. I finished the afternoon by having a quick go in the weirpool below a ford a couple of grayling and chub ending my session with variety, a truly great bit of sport. 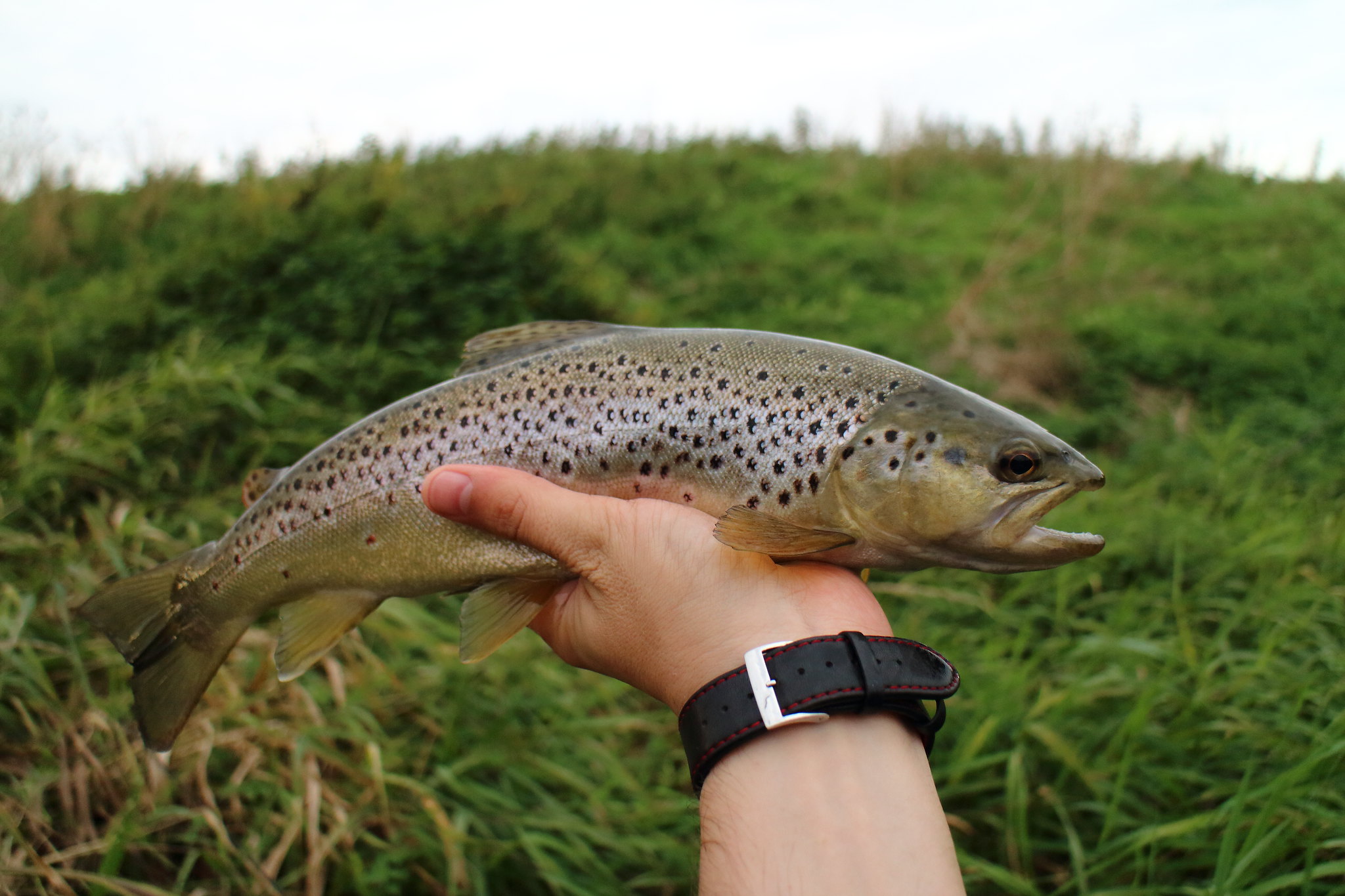