It's that time of year again, no mans land, the coarse season has ended and the start of the trout season is two weeks away in my part of the country. I ended the coarse season last Sunday having a final crack at the grayling and I certainly wasn't alone, there were many reports of people making the most of the fine weather and fined down rivers.

The winter season has been chaotic, each week brought a new storm or two from the Atlantic and certain parts of the country were left devastated by severe and prolonged flooding. I guess it was fortunate that I was otherwise preoccupied for three months and although I managed the occasional trip none were on my club rivers, which have been a perpetual chocolate milkshake all winter, only the river levels varied.

Back to last Sunday, the 13th. Steve and I journeyed up north to Sheffield to fish the River Don, this was our first trip back there since the end of September and the river conditions were in stark contrast to last year. We were greeted by a full but clear river - if you discount the dark peaty colour of course - this did make wading precarious, in fact there were times when I genuinely thought I was going to end up swimming; this was the first time I felt panicky and unsure and made me question why I didn't put in the studs that were provided with a pair of new wading boots I bought. A lesson learned for next time.

A short walk down took us to just past the point where we started before. Setting up at the tail of a tantalising pool that lay at the end of a long run that flowed against a wall, Steve chose to set up a klink and dink as he only had his 8' 4# Hardy Zenith, I set up the Lexa with a Hends Camou French leader, this allowed us to cover most options. For the first time in a very long time three flies graced my leader; something that was mentioned to me a while ago had stuck in my head, this combined with the fact I have never fished with spiders led me to tie on a Pearly Butt Bloa on the top dropper. Initially I tied a squirmy wormy style fly with a 3mm tungsten bead and a white bead-head PTN on the middle dropper, I chose these because of the colour of the water and in fairness they showed up really well - even at depth - however, the squirmy came off quite quickly, but only because a slight flaw with they way I had tied them meant the bead slid down to the bend. This was replaced with a pink bead biot nymph and the fly selection didn't change after that.

Just as we were finishing setting up a coarse angler set up at the top of the pool, we don't think he saw us and as he had settled and started fishing in rather quick fashion we clambered up the back and walked upstream past him. I started by fishing a deep hole without success and I recalled that I didn't catch anything there last time either. Walking a little further upstream we noted that the river had drastically changed, a S-bend had been replaced with a straight section, no doubt by some substantial flooding throughout the winter.

Passing the rod to Steve as I stripped off a couple of layers - a precarious attempt to cross the river had warmed me up - he started at the bottom of a long run; it was this area where Steve had filmed me landing a 15" trout. It didn't take long for him to catch our intended quarry, a small grayling that took the middle dropper and meant he wouldn't be blanking today. I didn't feel under any pressure just yet and told him to carry on, I was still faffing on the bank.

As Steve continued upstream he concentrated on the deeper water against the far bank, this left quite a bit of water on the inside and with Steve's approval I started to search the shallower, slower section of river. Keeping a low profile by crouching I maintained a short lead of a couple of yards fanning casts across the nearside half of the river. After around ten minutes of relatively slow progress the klink sunk out of view, lifting into the fish I was met with a substantial amount of resistance, a large shape twisted and turned in the shallower water, this immediately led me to believe I had hooked a grayling. Very quickly I knew I was wrong, the fish powered off across the river into the main flow, this really tested the 0.15mm tippet and it didn't take long for it to point itself downstream taking me with it. Thankfully it stopped in a small back eddy, I stood and watched as it tried several times to rub the fly off of the end of its nose. I'll have to admit, the trout was in charge, I couldn't get its head up and every time I tried to persist it to my way of thinking it would just surge off somewhere else. Eventually the fish began to tire, standing in a strong flow with an uneven bottom made things difficult for me, I ended up unclipping the lanyard to my net and tossing it to Steve who was downstream of the trout. At the second attempt of trying to lift the trouts head up Steve scooped my hard earned prize, in the bottom of the net lay a truly buttered beauty with the most intense red spots I'd ever seen.

A good few minutes rest in the bottom of the net allowed the fish enough time to recover. Steve had some lightweight scales and we quickly weighed the fish whilst still in the net, this gave us a figure of 2lb 12oz, the net weighed 10oz after the trout was released. A few quick snaps and the trout steadied itself as it was released into the flow. First fish of the day, 2lb 2oz and 17" long, but no one had told this fish it was five days early.

Continuing upstream fishing the remainder of the run, our drifts were not interrupted. The next pool up was wider still, this allowed us to fish side by side dissecting half of the river each. We used our own set-ups and very quickly I caught a grayling, we then proceeded to have a fantastic fifteen minutes of catching; together we caught ten fish, a mixture of trout and grayling and all fell to nymphs. What did stand out was that we could only catch when fishing a small area ahead of us and only the bottom third, nothing in the edges or the top end of the pool. Twice Steve and I simultaneously caught and played fish together which gave us some amusement. We left the pool feeling jubilant and hopeful this was a sign of things to come, but alas it turned out to be a false start and we carried on the day fishing and making our way upstream. 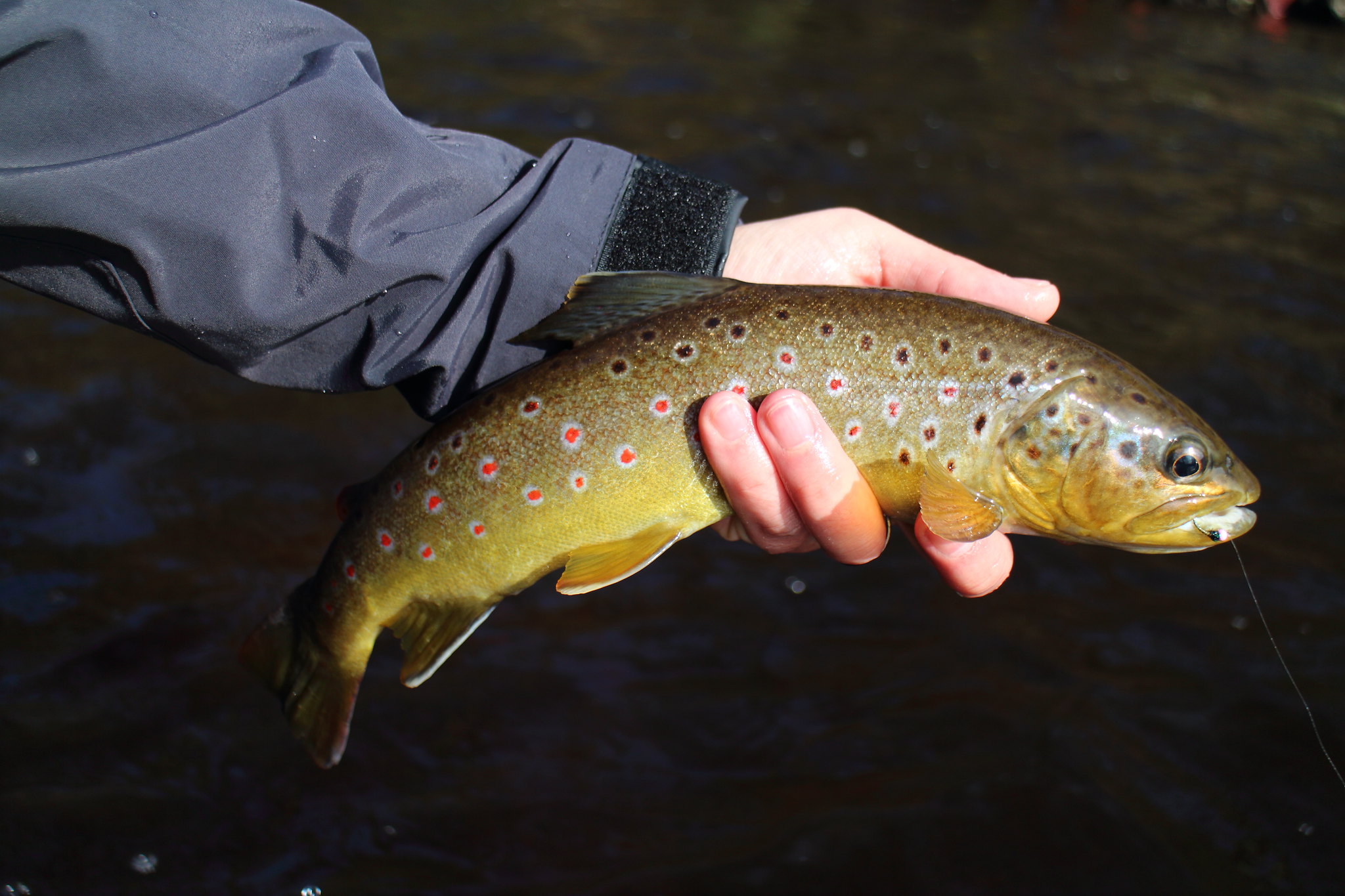 We weren't alone on the river and it was no surprise, the weather was glorious if slightly fresh and much to our surprise the trio we had to keep leap-frogging were also fly fishing, however we observed they didn't deviate much from a downstream and across approach and I couldn't say whether they had any success.

The highlights of the day were two grayling that I fooled on a Pearly Butt Bloa and a Barbour Paraloop Dun. The take that registered on the indicator when the spider was taken was so animated and aggressive, I have never seen an indicator move so much before. The grayling that took the Barbour Dun is the first fish I have landed on a dry fly this year, it's not that I'm a purist but I do love surface action and it was a welcome change from dredging the depths with tungsten. We finished with over twenty fish between us, the ratio leaning towards me and there was a good mix of species with neither one dominating. Something we noticed with regards to which species took which fly, was that most of the trout were caught on pink bead-head nymphs with the grayling mostly taking the white bead-head nymphs. What was also interesting is that my pink bead nymph was on the point and would have been fishing much deeper than Steve's which would have fished quite high in the water owing to the method he was fishing. This does replicate similar results when I fished with Tom in September on the same river, very interesting indeed.

All that remains is a short wait for the trout season to start in East Anglia, bring it on!