I work with some great people - Lee, one of my colleagues covered my morning shift for me on Friday last week allowing me to fish all day. I was due to fish the smaller club river with Steve, which would have been his first trip to this river. Due to unforeseen circumstances Steve couldn't make it and this gave me the chance to spend the day on the river I fished the end of May.

I spent such a short amount of time there and was left captivated by the river, I couldn't wait to go back. As I had the whole day, I left a little later, missing the rush-hour traffic which gave me a much more pleasant drive. Arriving at the river it was de-ja-vue, conditions were very similar although the river looked a little lower, despite being spring fed it suffers during dry spells.

I crept into the river and crossed to the far bank; I find setting up whilst standing relatively still allows the river to settle around you and it doesn't take long for feeding fish to reveal themselves. As before I set up my self built six foot 2/3#, I can't get enough of this rod, I love it, and I love using the Waterworks ULA Purist with it.

I could see quite a few fish rising ahead of me, some were sipping, others launching full-scale attacks on late mayflies hatching off. The surface film was covered in fluff from seeds being released upstream, among the debris I could see the occasional aphid and suspected they were providing the main feast. As much as I love fishing aphid patterns I feared it would be a struggle to see such a small fly with all the rubbish on the surface. To make things easier for me and also because it is such an effective pattern I tied on a size twelve Deer Hair Emerger; this fly has probably caught the biggest majority of fish for me so far this season - it is deadly. 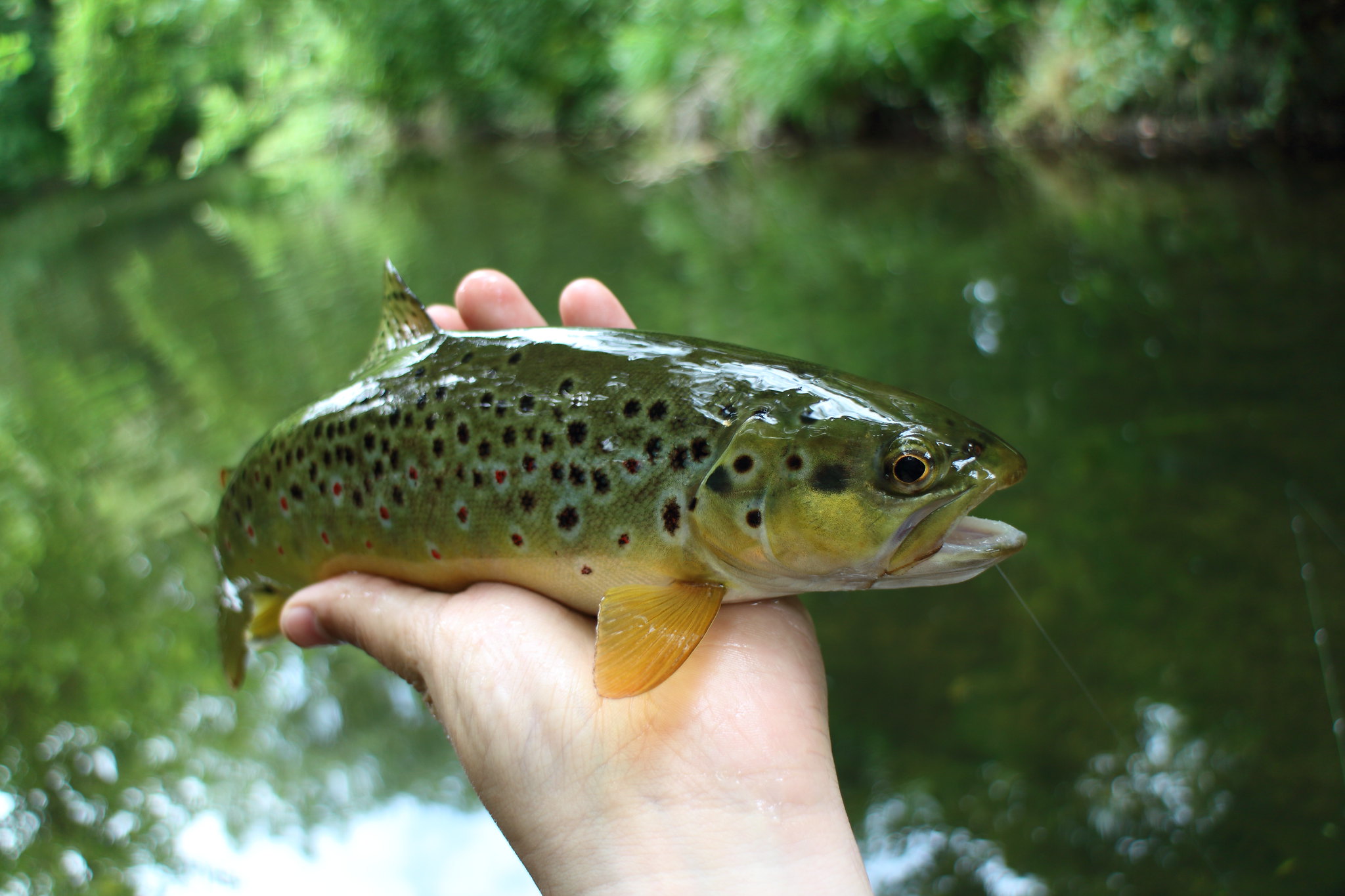 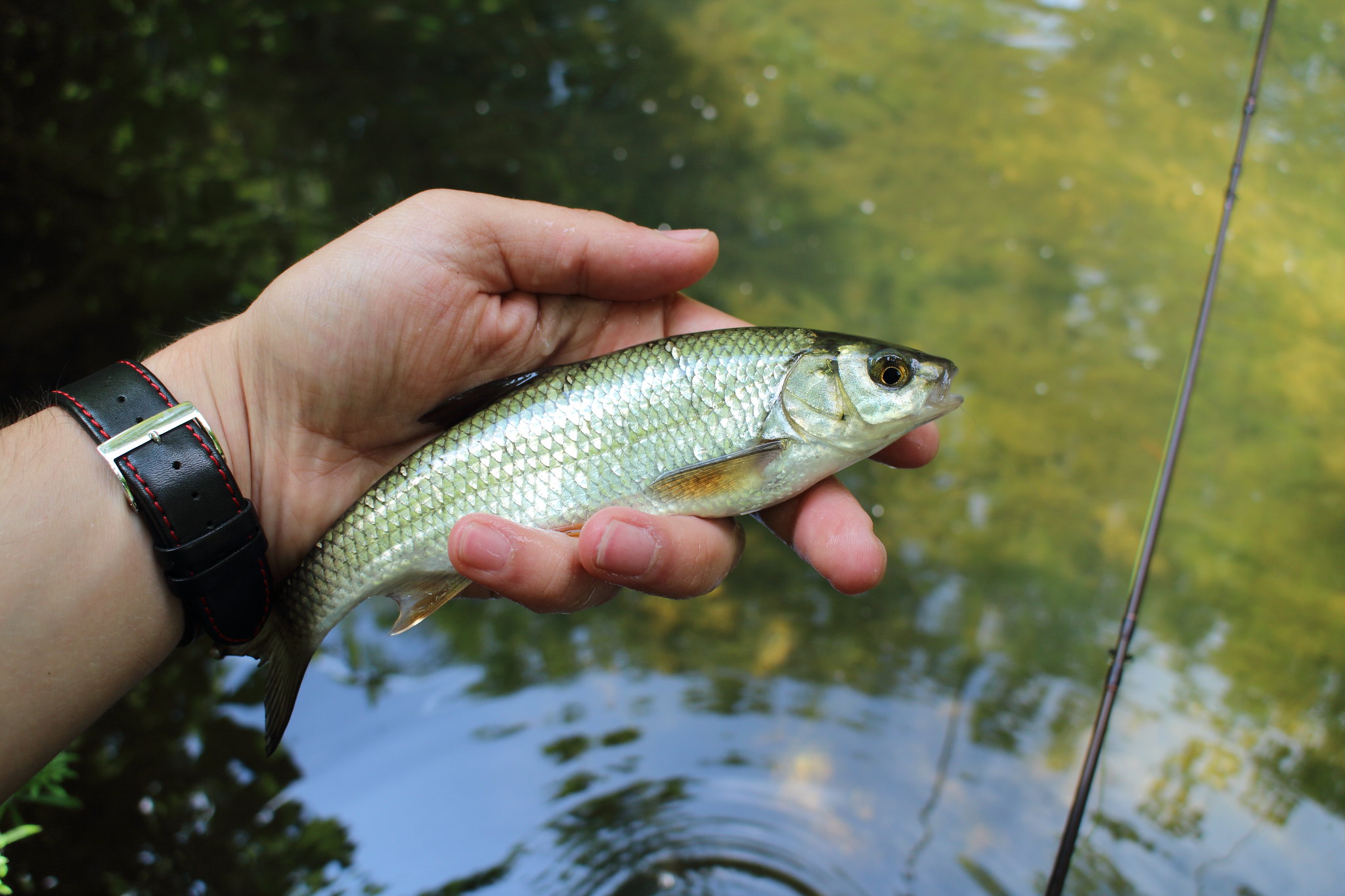 I slowly made my way up the river casting at either seen fish. or those revealing themselves with frequent rises. First fish was a plump little trout of around eight inches - I always relax more once that first fish is out of the way, no-one likes a blank. A small dace followed before I came across a larger trout that was feeding, the DHE ticked all the right boxes for this fish and a great scrap ensued. In such a confined river I was lead a merry dance as the fish tore all over the river mostly trying to get into the edges where trailing vegetation reached the water. 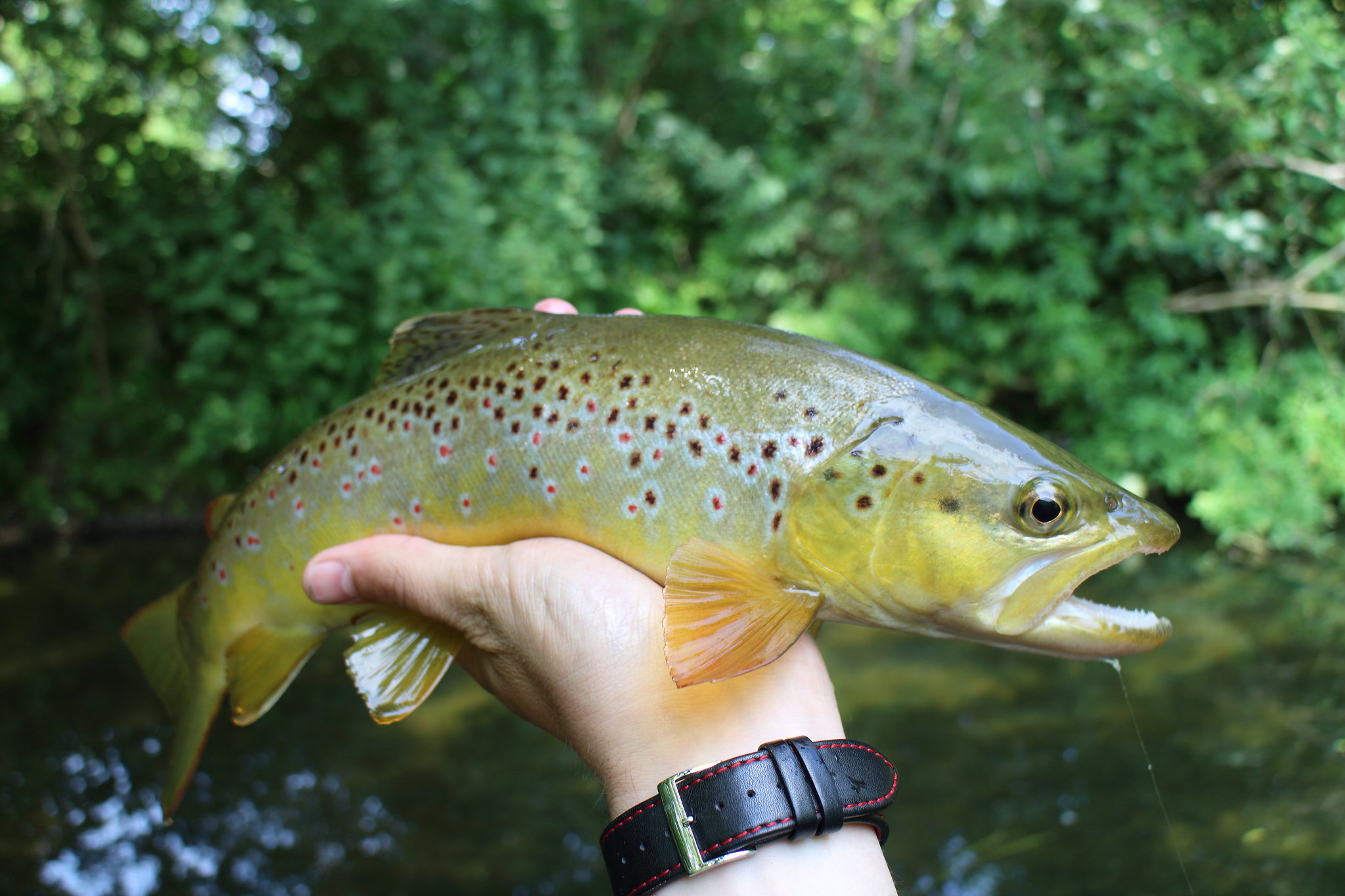 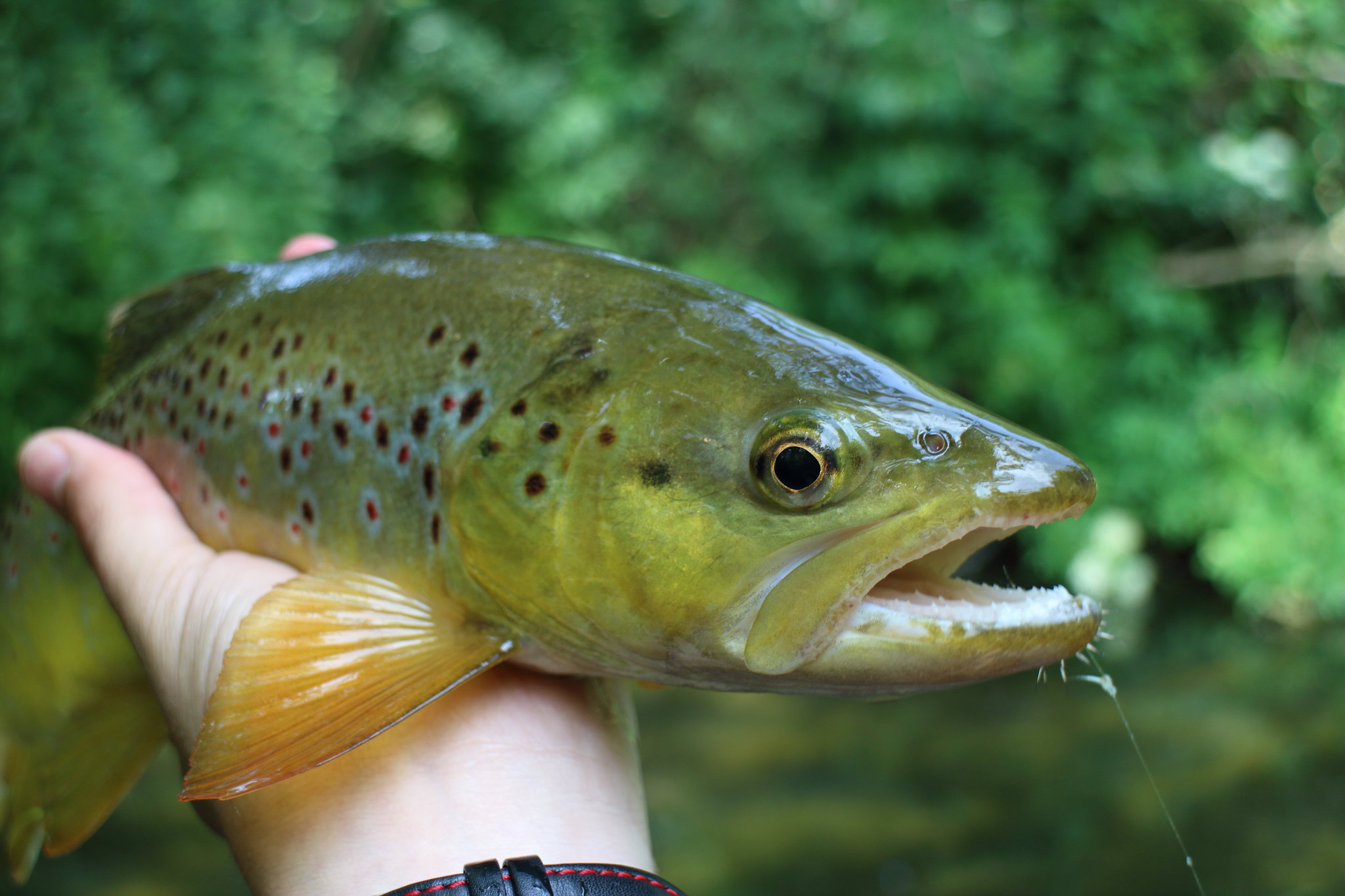 At twelve inches long, the trout was in great condition and clearly full of energy, as a result I had to move upstream a little and allow the river to settle down from all the commotion. Ahead of me was a deep pool on a bend and I failed to catch a single fish here last time, I had learned my error and approached with much more caution. I had caught and released around four or five trout by the time I reached the head of the pool around the corner. 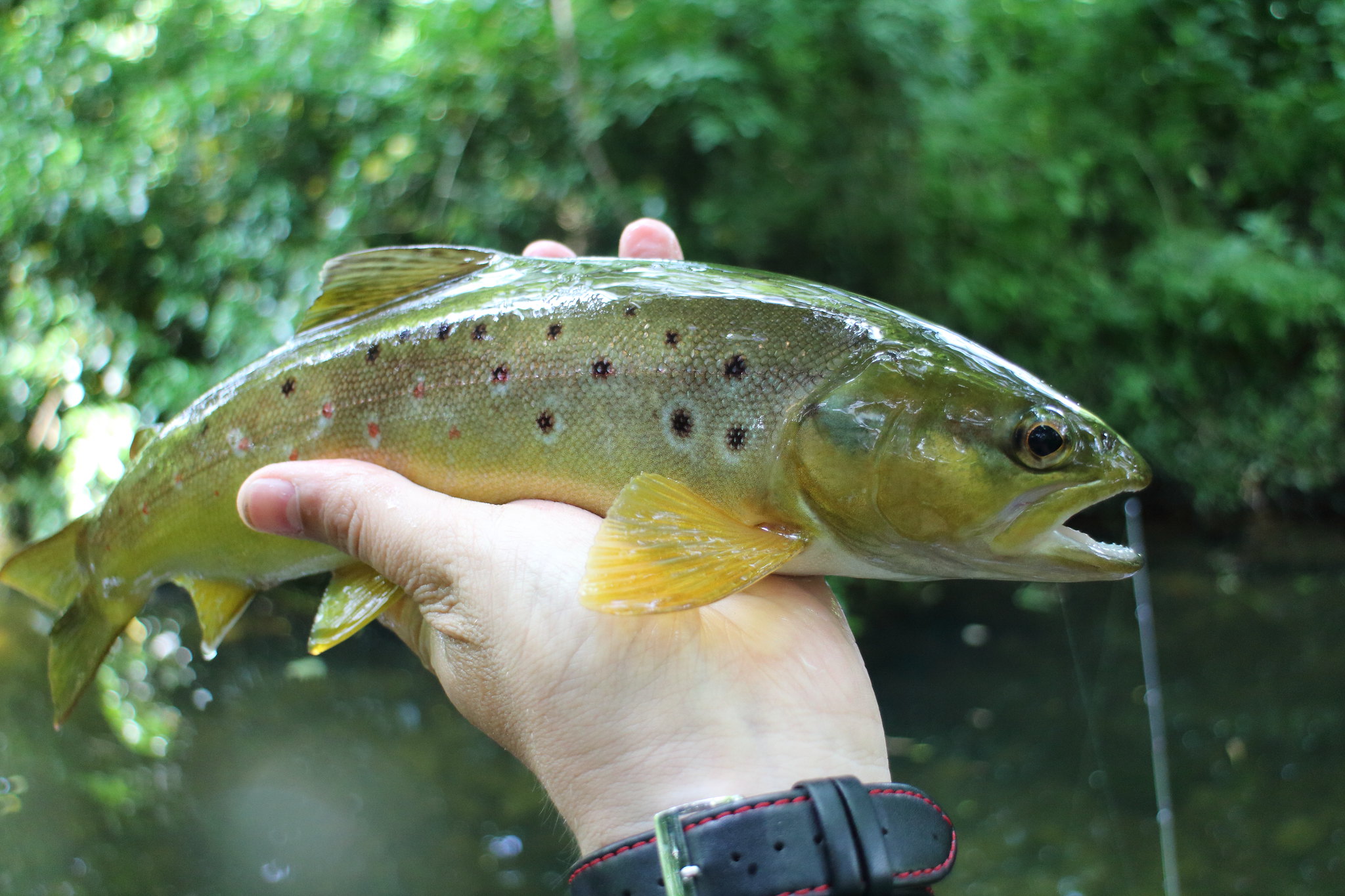 I missed a good fish that was tucked only inches away from the bank sat in the smallest of depressions. I had watched it rise several times and as I walked past it was obvious why it had taken station there; a foam line consisting of a single file of bubbles providing a steady stream of morsels drifting down the current.

I saw a trout I recognised from my last visit, scales shimmering like gold flakes across its back makes it very distinctive, I couldn't tempt it this time. Missing a couple of really small trout, I found a small group of chub hanging around a slack part of the river, catching one sent the others in to a frenzy as they charged around scaring everything else. I spent some more time resting the river as I tried to squeeze past the frightened fish and stood still waiting for things to calm back down. 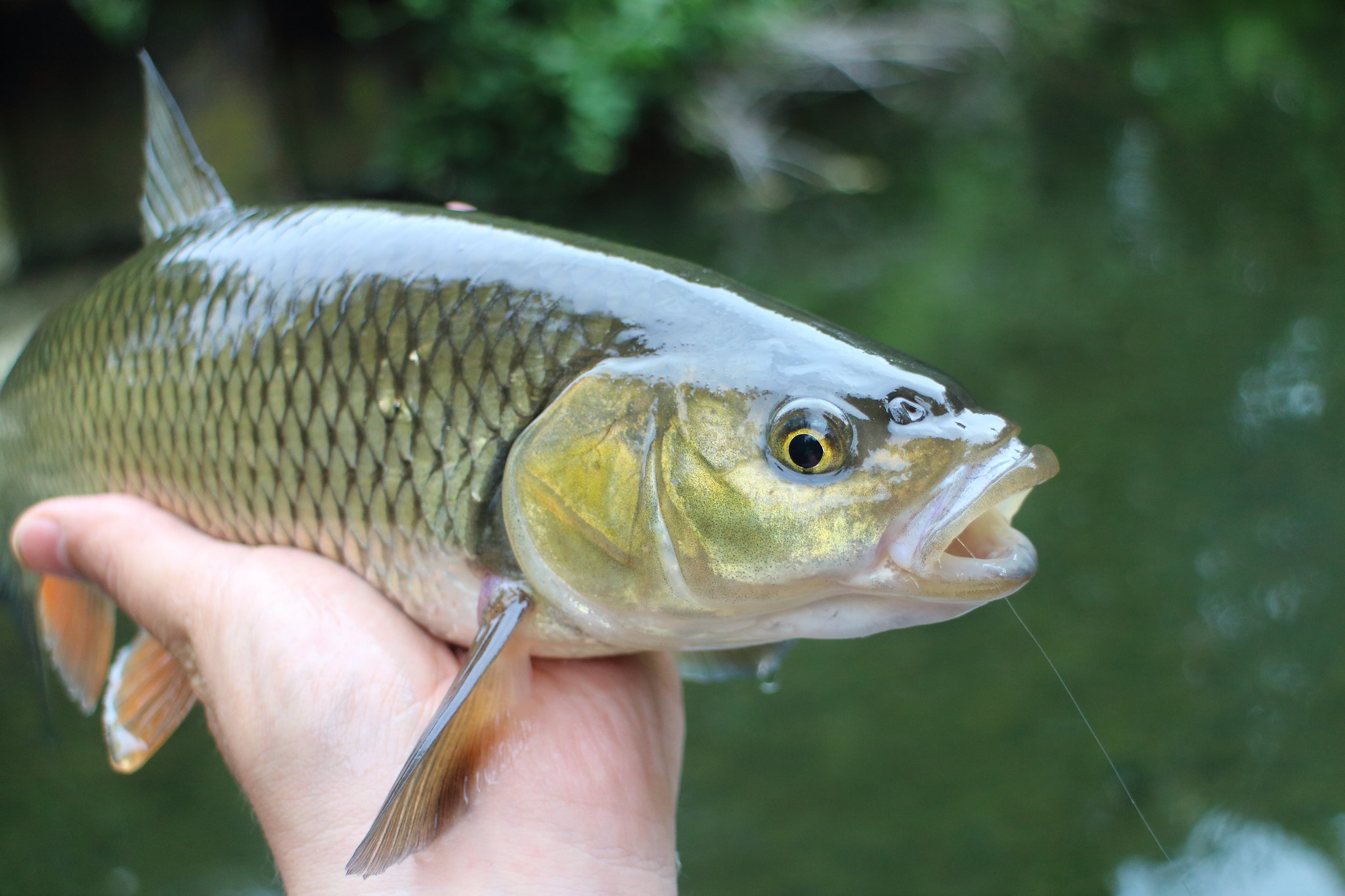 Like a small doorway, an opening in front of me was surrounded by a horrifying tangle of brambles and branches, an exact cast was needed otherwise you will certainly be fetching stuck flies. A small trout could be seen against the light bottom, hanging mid-water occasionally tilting up to take items from the surface. First cast failed to tempt it, second cast went wayward into the vegetation, thankfully it didn't remain there allowing me to seduce the small fish, however, it didn't stay on.

The river above flows over a shallow gravel bar hitting the bank and flowing hard alongside it, the bottom worn down to clay by the flow and back-lighting all the fish that lay above it - great for fish spotting. I spooked a good-sized trout and watched as it shot past me - at least it went downstream.

Another trout of similar size was stationed in a small depression near to the bank, the current flowing over its head bringing food. I watched as it darted out from its lie to intercept food. My cast landed short, not that it mattered, the trout turned on its tail and took the fly as it faced downstream. Shooting up over the gravel it used the velocity of the fast current to propel it back downstream with ferocity, heading for a tangle of sunken roots and trailing weed. Taking a few minutes I finally drew the fish over the net. Too slippery to take a picture the fish made twelve inches - they fight far harder than they ought to for their size.

As I retied my tippet and a new fly, I could hear Joe calling my name, he had seen my car and came down looking for me. I told him of my success and failures and he was surprised to hear that I had been fishing for four hours, such was the slow speed of my travel. He offered to take me and show me some of the water held by the club he is a member of - the club is generous allowing a member to rod share with a guest. Joining the river above a small weir, we waded up-river, there were a few fish ahead of where we entered the river, mostly dace, but there were one or two trout dotted about. I missed a couple of dace and trout - very poor angling on my part.

We found a large trout lying close to the near-side bank, despite several well placed casts the fish drifted away and hid under some weed. We trampled along a very overgrown bank, the river here was more a slow flowing lowland river, although it remained crystal clear. As we walked upstream the rivers pace quickened and the ribbon weed replaced with ranunculas. We changed our path from the bank to the river. As we walked the river we came across a small group of large fish, a shame we had already spooked them. 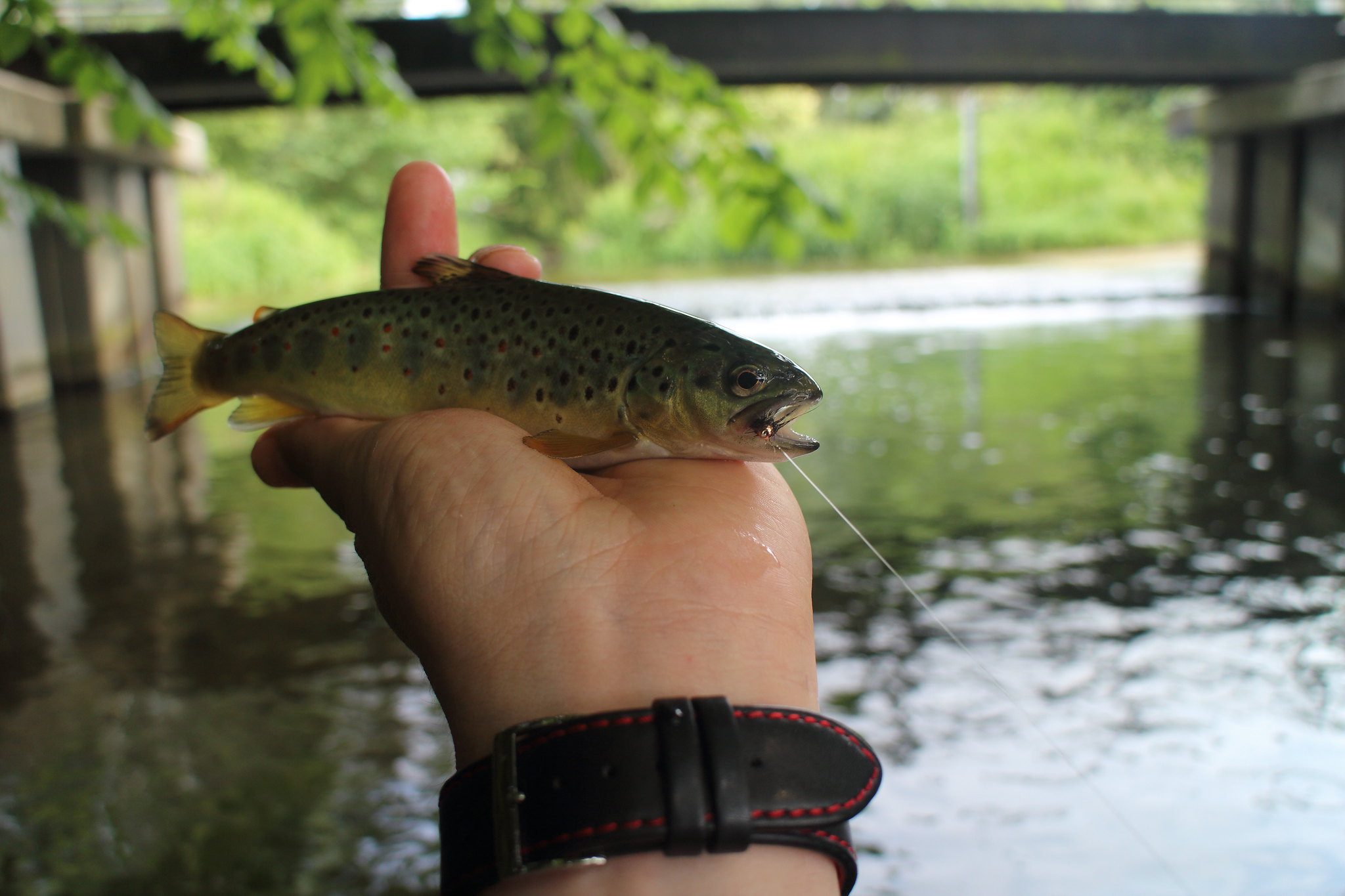 It wasn't until we reached a weir below a ford that I caught a fish, two in fact - one small, the other larger; we finished there and followed a road back to where we started. Joe dropped me off by my car as he had run out of time and had to head off. I returned to the river where I had left and crept back into the water.

Above the gravel bar a large tree over hangs the rivers surface, tickling the film with the tips of its leaves. A trout was rising underneath, not an impossible cast but tricky enough. Several attempts were needed before the fish took the DHE. Lifting firmly, the fish immediately and savagely accelerated down. the Purist singing sweetly and line was stripped off at speed. Unfortunately the fish was too powerful and I too slow, the tippet snapping like the proverbial cotton.

I spooked a couple more fish as I passed through the trailing branches, ahead was a lovely riffle, last time I fished I spooked fish from the whole length. I was determined not too fail this time, a trout of around ten inches launched itself at the fly moments after it landed, a brief fight let left me feeling pleased as I really wanted to catch a fish from this run. By the time I had reached the end of the short twenty yard section I had caught three fish in total.

The next pool up only produced one fish, it had spooked all the others which was a shame as I managed quite a few last time. This fish had an interesting black mark near its tail, an old wound that had healed with a darker pigment. 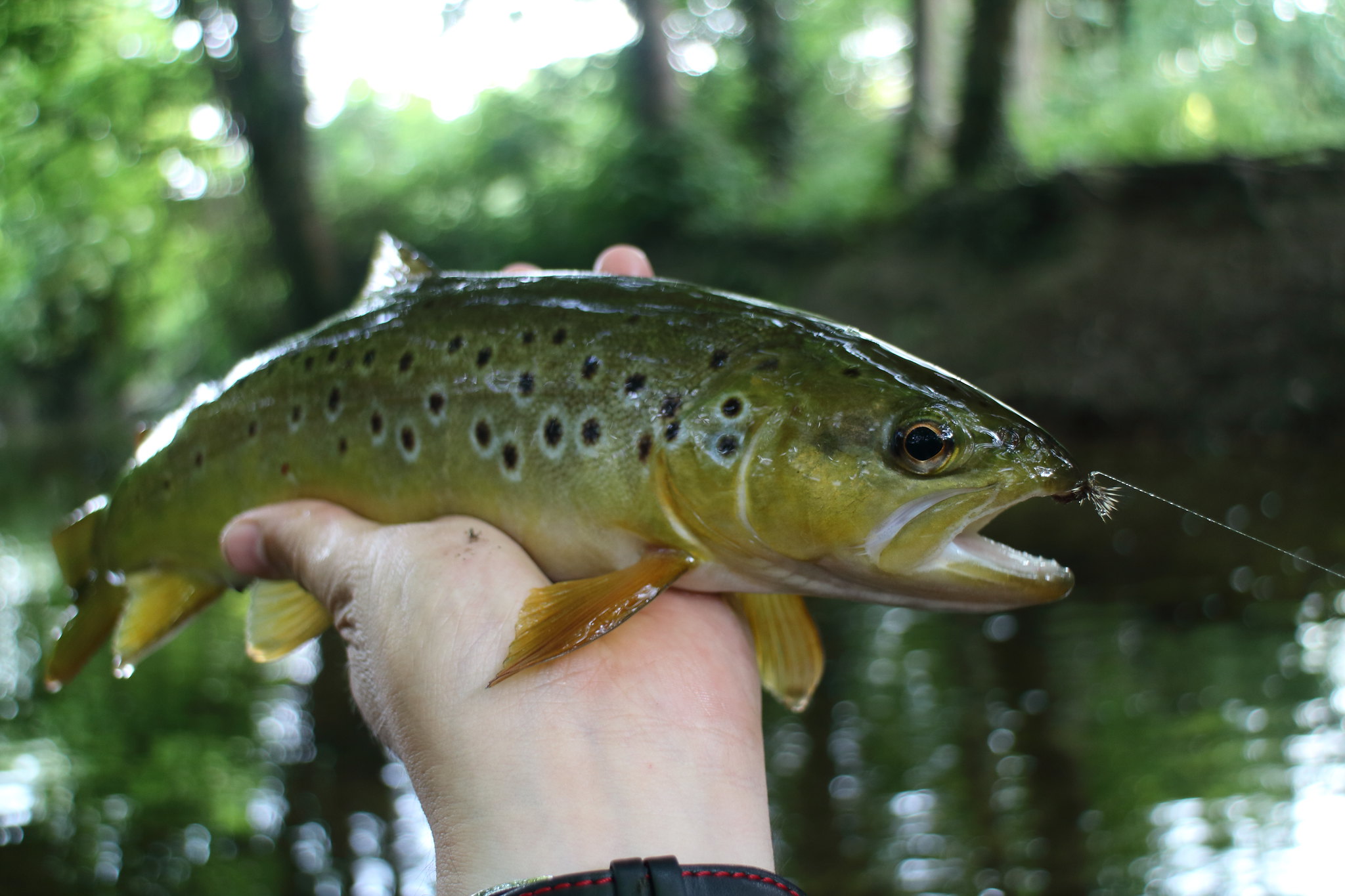 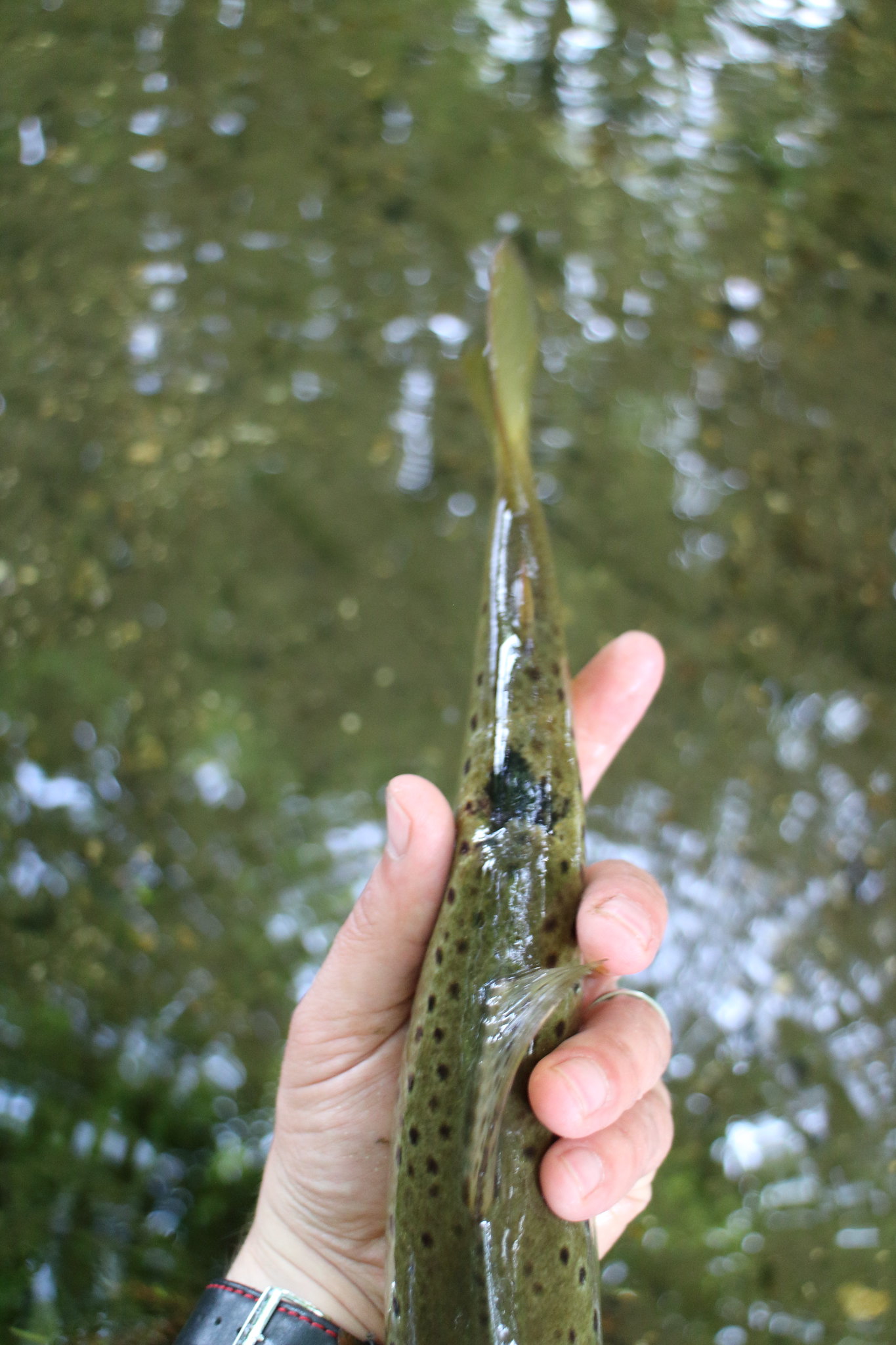 I had now reached where the river runs at the bottom of several gardens, the river is really attractive along this stretch, the river is slightly wider and shallower as a result, ranunculas carpets the clean gravel, swaying in the current. There were a lot of fish in this area - chub, dace and the occasional trout - most were holding next to the reeds on the near bank; they provide a decent overhang and the fish generally swam under for protection.

I caught a number of dace with the odd trout and chub mixed in, one notable trout that needed some effort in tempting, fell to a size 22 (old sizing) klinkhamer. As I reached the top of this part the river flowed under a tunnel of trees. A good swarm of caddis were zooming up and down the river, I could catch them easily enough, but getting them from the net to my container proved problematic, although I succeeded in the end and secured two specimens in my film canister. I later identified them as Athripsodes cinereus Brown Silverhorn after taking some photographs. 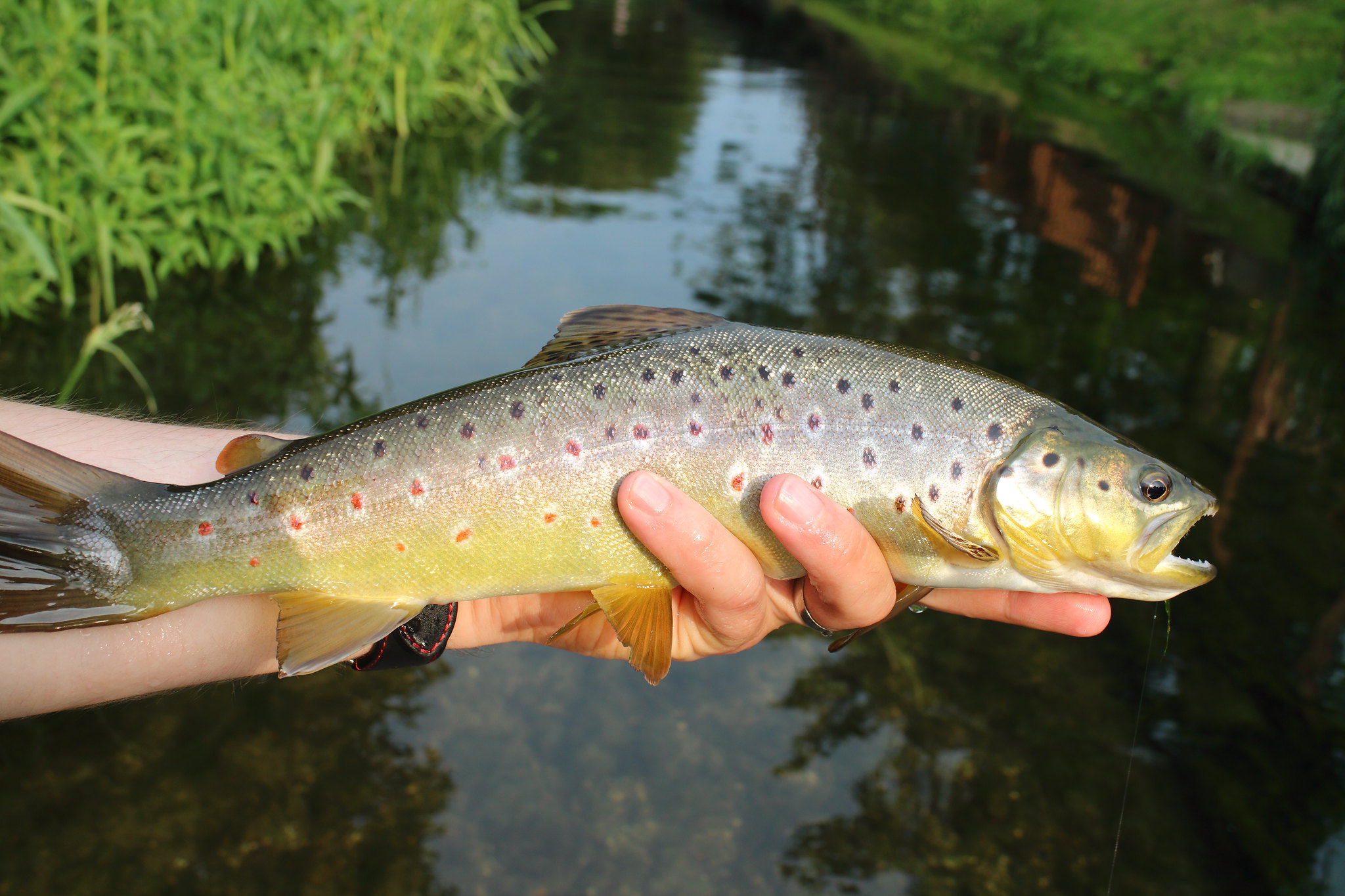 I changed over to a Balloon caddis and caught two more trout from under the trees. By this point it was time to leave, it had been a long and extraordinary day, I caught upwards of thirty fish, mostly trout with a good number of dace and a few chub.

Days like this are good for you, because although I do like to pursue larger than average fish, sometimes you need to catch a net full, just to recharge the desire.