Last Of The Mohicans

A very delayed post for some reason - I think I just forgot to write it.

A lunchtime finish on the 3rd saw me head off to use a guest ticket I had won in a raffle, for a club whose waiting list I am on. To cut a long story short I wasted a couple of hours looking at various bits of water; I struggled to find anywhere worth fishing as a lot of the river was over grown both inside and out of the water. Access was restricted on one of the sections I looked at due to a barbed wire fence that created a buffer patch - great for the river, but not so good for the wader-wearing angler who incidentally was fishing a river with a no wading rule!

I conceded defeat and headed to the smaller club river that has been so kind to me recently; I had permission to fish late so it didn't bother me that I didn't get there until late afternoon. I made my way to the bottom of the long glide where I had fished last week with Tom. I knew there were fish here and the number of mayfly spinners in the air and flitting along the rivers surface gave me hope of good sport.

The afternoon was bright with a little wind, there wasn't any surface activity while I set up, despite the spinners laying eggs and a reasonable number of duns hatching, but I was hopeful that the Mohican would do it's thing and bring the fish up. I fished up the glide without so much as a swirl or missed take, it wasn't looking good. Even the pool at the top failed to produce anything, and the pool above that too failed. I was starting to get desperate.


By this point I was standing just below the horse's lair, not really wanting to deliberately recapture a fish I desperately felt the need to hook, let alone land a fish. The ever reliable JP Pupa tied with a standard copper coloured bead with a Scruffy Dubbing caddis green body produced a fish first cast. You simple can't beat visually watching a fish take your fly and after a brief and unconvincing scrap a plump 15" fish lay in the net, not the horse I was expecting but it saved me from the dreaded blank. Checking with previous pictures this fish was indeed a repeat capture, caught earlier in the season in the main pool below the horse's lair. 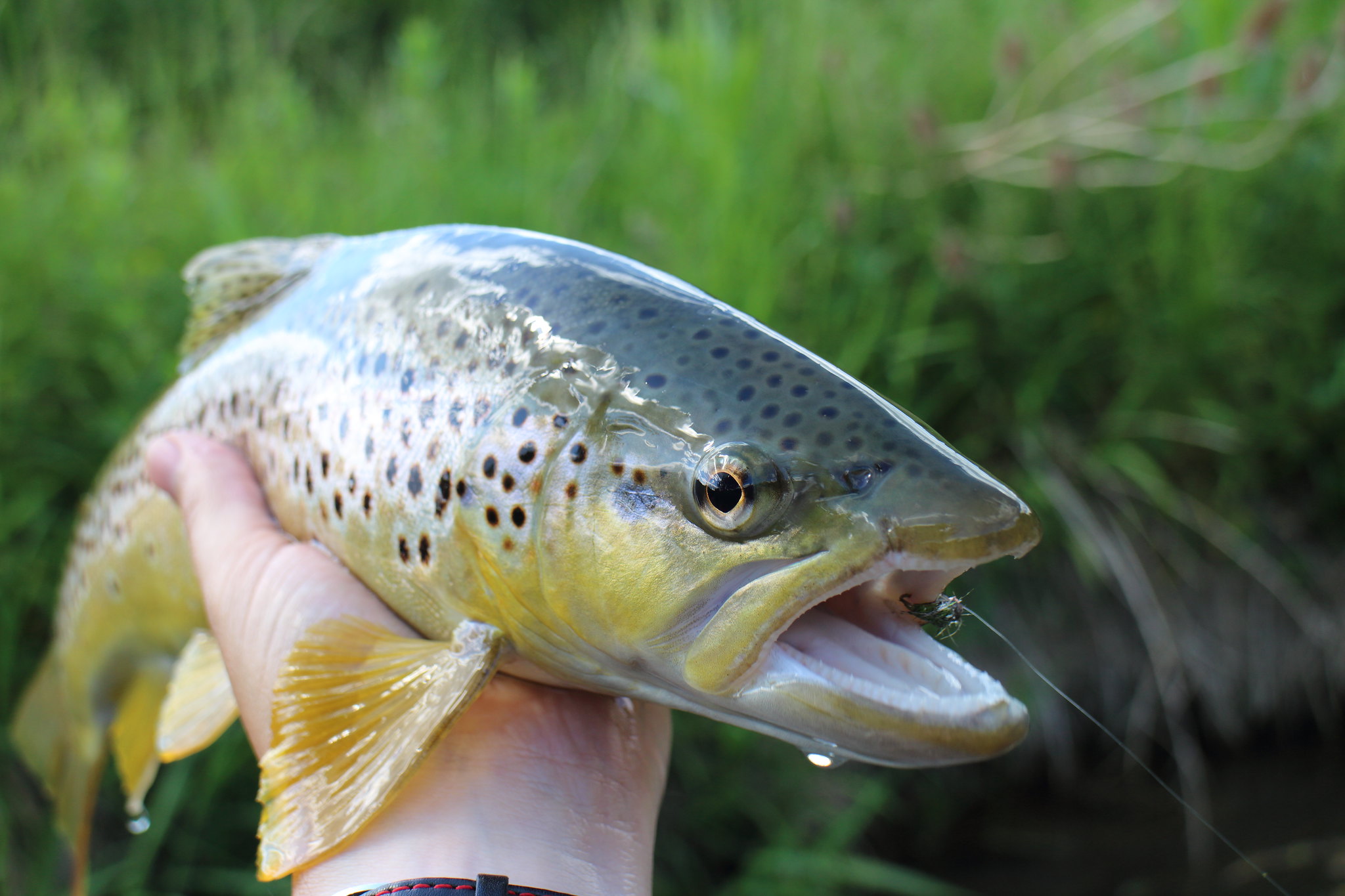 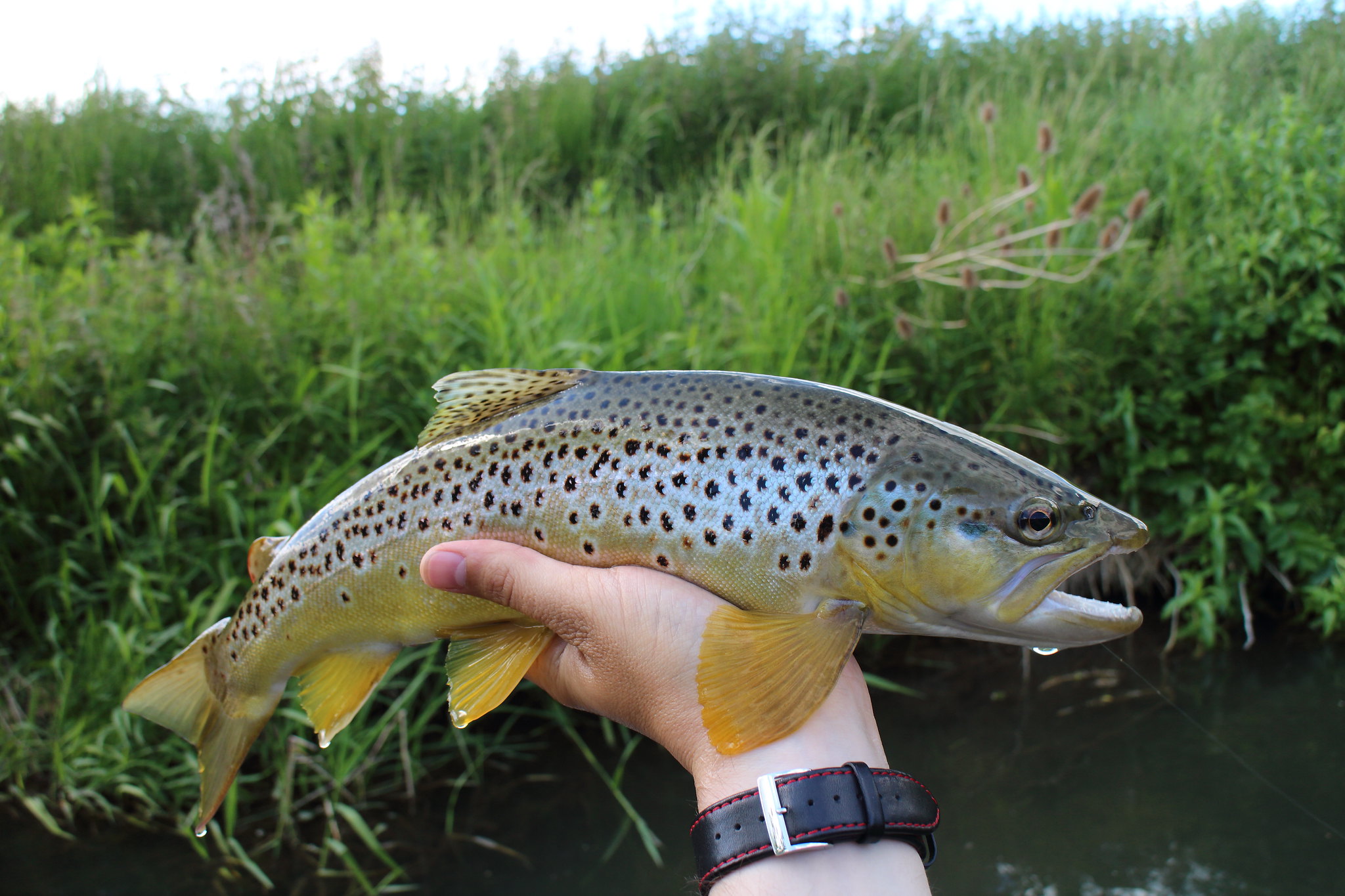 Moving up the river I continued in vain having retied the Mohican back on. This section had yealded several good fish but gave me nothing that afternoon. Making my way upstream, I couldn't help wonder if anything was swimming in its current, I still hadn't seen a rise yet. A little further up a rise gave me encouragement, after a couple more rises I knew there was a fish I could target. A sprightly 12" fish rewarded me for my perseverance. 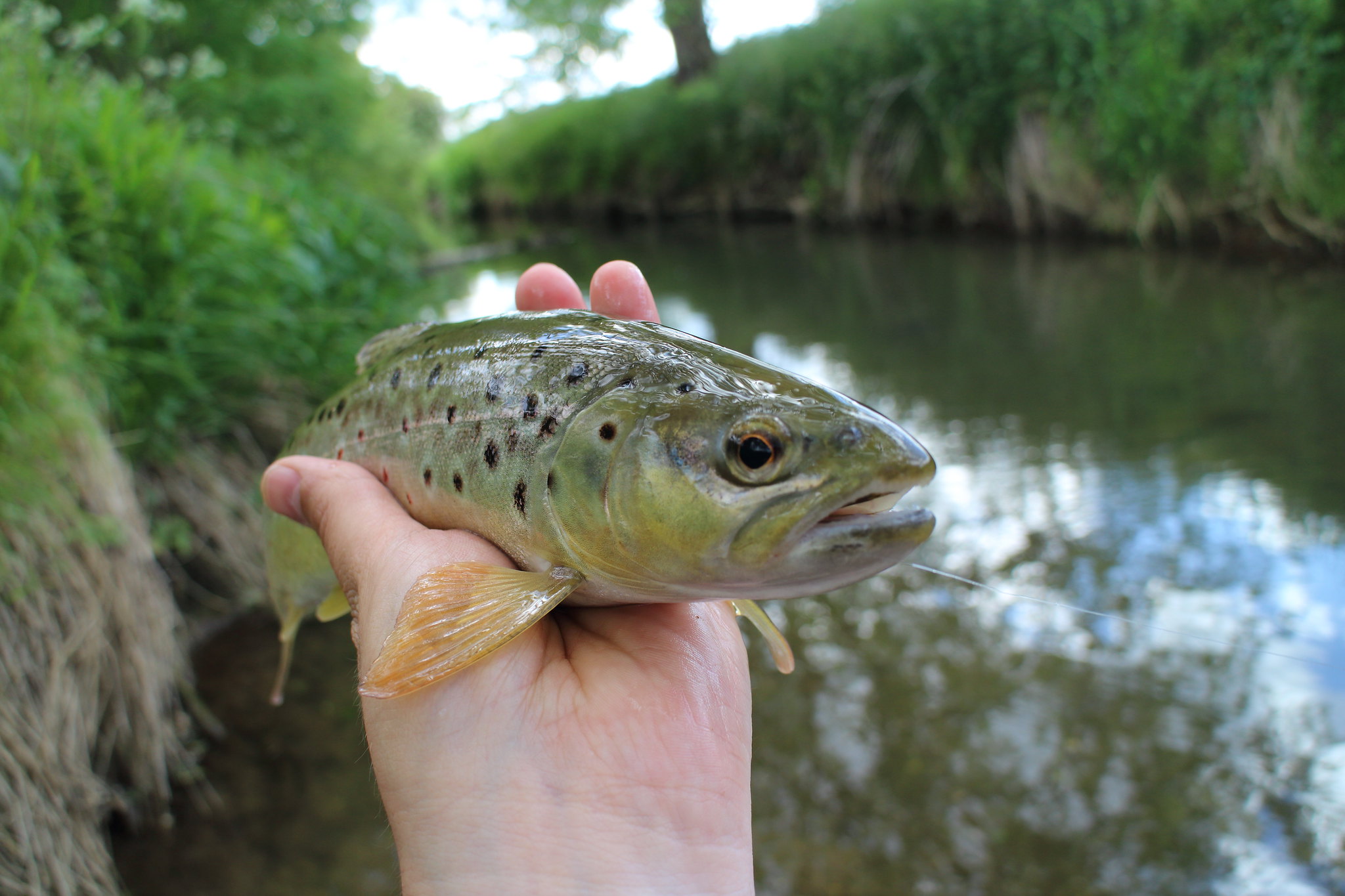 Leaving the river and walking a short distance, skipping what I consider fairly unproductive water I slipped into the river at the bottom end of another long glide. I don't know what made me but I stood in the edge of the river and waited for a few minutes. It wasn't long before a very large fish exposed itself. Rising close to the bank it moved with purpose taking spinners and duns without fuss, I watched, barely further than six meters downstream. Moments like this make you appreciate how essential a quite approach getting to and entering the river, I really was that close to it.

A few casts proved to be too short, anxious to not spook the fish I gave it a rest while watching. Lengthening more line it took a couple more casts before the fly landed where I wanted. A confident rise was met with a firm lift and the fish was on. Boring deep into the undercut on my near-side the fish tore up and down, doubling over my little six footer. I saw the trout more than once, it was colossal. I remained calm and met its every move with a counter move, side-strain was my allie. However, as with all big trout, this one knew what it was doing, finding a small but thick branch in the undercut it had successfully caught my line around it. I was still in contact and remained confident, this may have been my downfall.

Tightening down to the fish, I made a fatal error. Initially it was the furled leader that was entangled around the branch, the result of my shortening my line meant the tippet was now in contact with it, the furled leader ultimately being stronger than the mono. All this was happening inches away from me, I could see the trout trying to get away - then it happened. I watched without it registering as the trout shot off, a few seconds later the realisation hit, it was gone. As I snapped and pulled the branch out before throwing it into the bank I vowed we would meet again, I was confident of it.

Surprisingly there was little dejection flowing through me, it was just one of those things - some you win, others you lose. Tying on another fly I fished out the run missing a take, the deep pool failed to provide any comfort.

Once again I left the river and walked a short distance before rejoining it a little further upstream. A small trout jumped after a fly but I couldn't get it to take and prospecting up the run and around the corner left me wanting. At the head of a small pool a fish sipped flies with such regularity I wondered if there were more than one. Tying on one of the foam-winged spinners that had given me so much frustration only the week before, I wondered if it was a good idea - I vowed I would simply lift harder, in case the wings were masking the point and preventing the hook from penetrating.

Several well positioned casts failed to lure the trout as it took flies around the spinner. I was beginning to have doubts whether it was mayfly spinners it was taking; I spent some more time observing. There were the very occasional olive spinner drifting down the current, but their numbers were dwarf by the larger mayflies. I persevered and eventually my persistence was rewarded, a much more powerful lift than I would normally firmly attached the fish to my hook - and it held. I was led a merry dance by this fish - the trout in this river love their undercuts - but the little six foot rod performed beautifully. 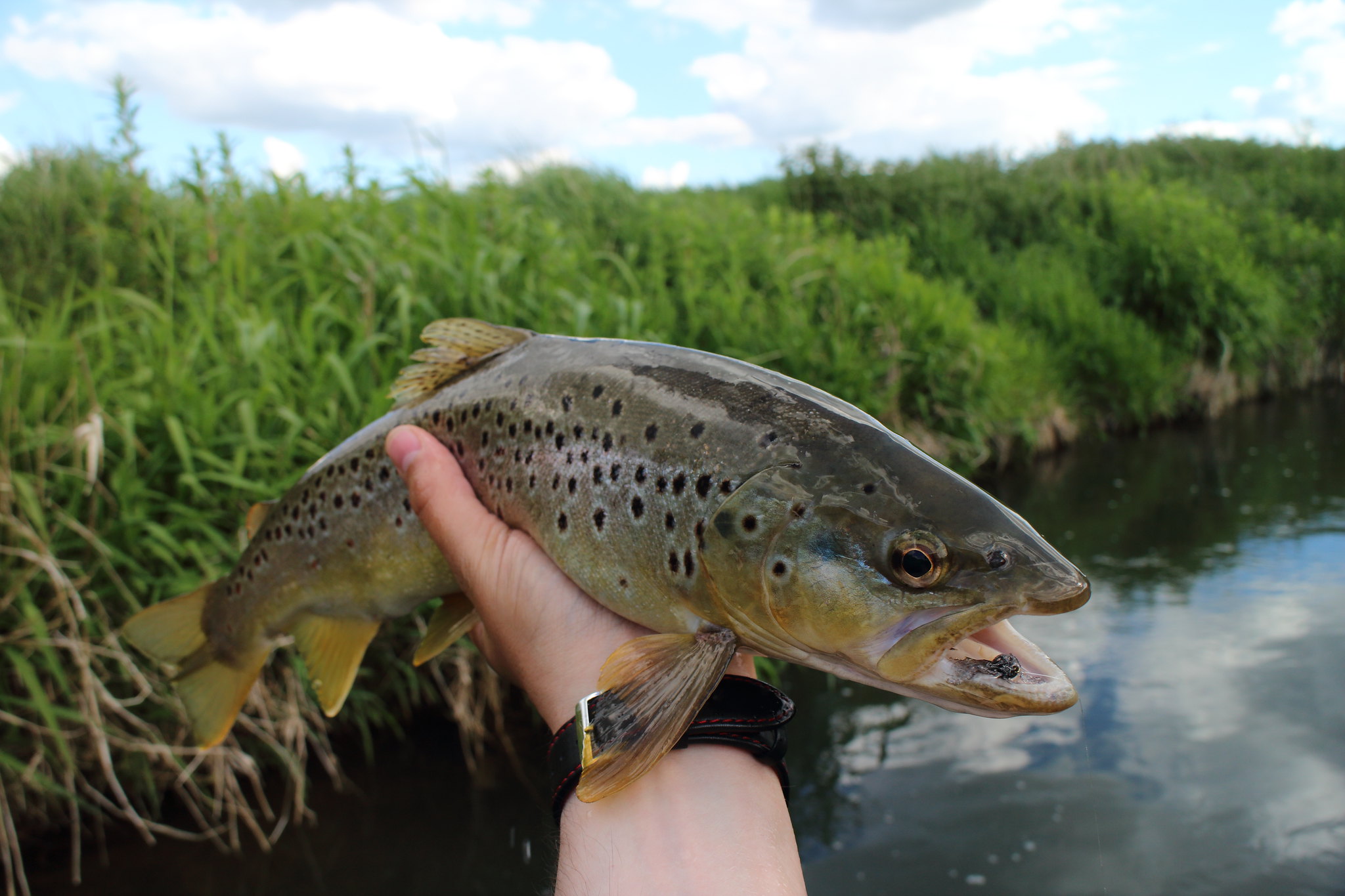 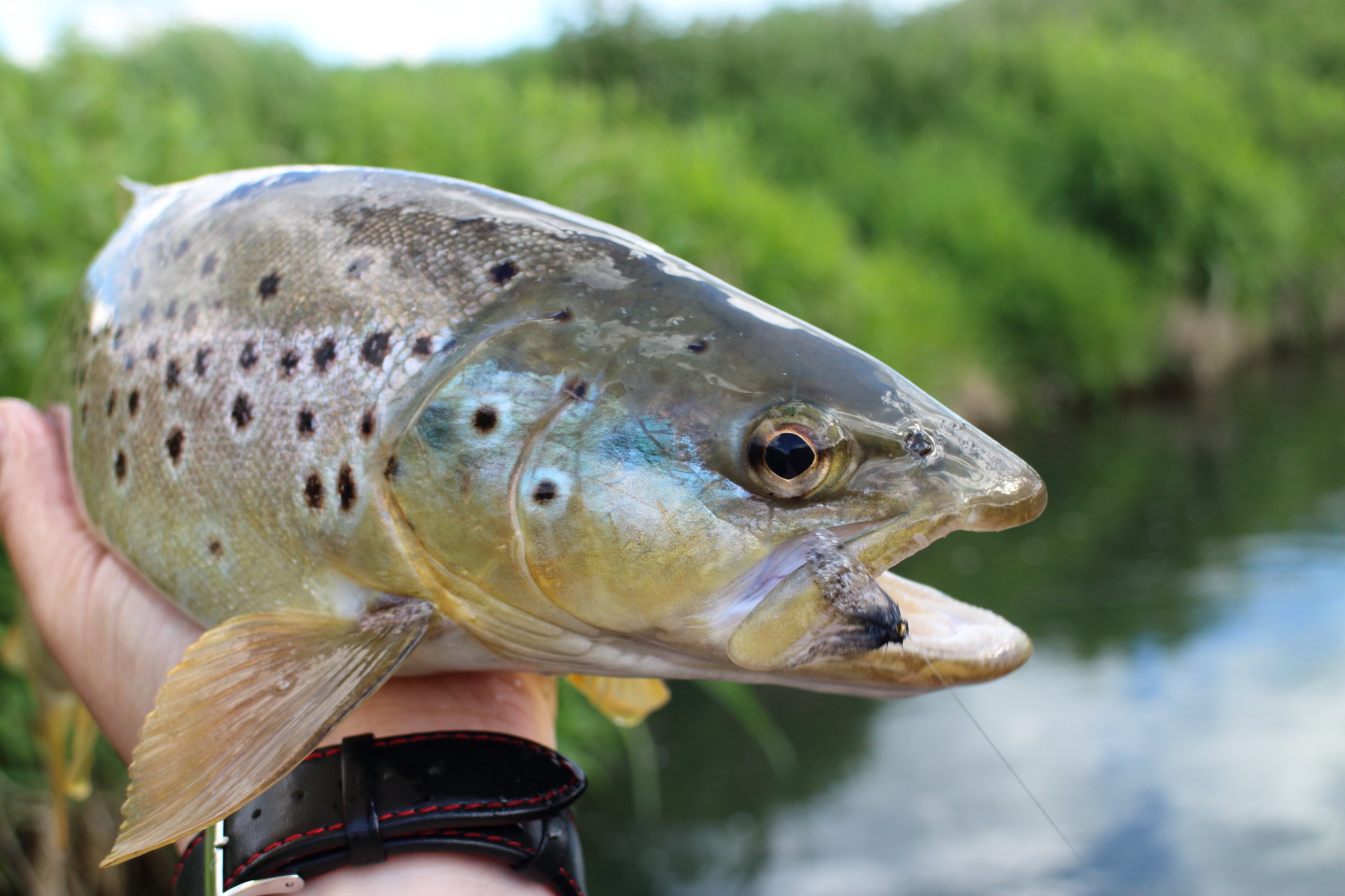 Expecting the fish to be the 16"er I had caught before from this pool, I was pleasantly surprised at the size of the fish that lay in the net. It measured 18" but was a long lean fish, by the end of the summer I'm sure it will be reaching three. However this trout was nothing compared to the one I lost earlier, I reckon that one was easily over 20" and looked fuller in the body, possibly a near four pounder! I'm not sure how I will catch it, the mayfly now over my job will be much harder, but I am focused and relishing the challenge. Bring it on!

Fishing a little further on without success I quickly cut my losses and headed home. Despite losing that monster you can't go home after catching such a splendid fish and my biggest so far.
Posted by Ben Lupton at 12:09