I was on holiday last week, a free pass on Tuesday gave me opportunity to meet up with Steve. The morning greeted us with persistent rain, however our plans were already made so with a little hesitation I made the hours drive to our club river. We planned to have a brief fling on the urban stretch before deciding which beat to go and fish. Steve arrived before me, the opening update from him made for grim listening, the outflow beneath the white bridge was spewing out a substantial amount of brown, yucky, urban fluid; this ruined the river immediately downstream but despite this I knew the river could well be clearer downstream as I have found out in the past.

Jumping back into our cars we took a short drive to convenient parking spot downstream, driving over a bridge we peered below to see a reasonably clear river, the murk hadn't made it down yet. Deciding to have a go two beats down, we parked up at the next parking area and began to tackle up, this was an area neither of us had really fished before and although we anticipated worsening conditions we were upbeat about exploring a new stretch. Walking downstream we scanned likely runs, pools and areas we expected to hold fish, as we continued walking along the river we decided to head to the bottom end of the beat, that would allow us to view the whole length, probably more for future reference. A weir marks the end of this beat, a short double-back along the path we had just walked took us to the end of a short run. I sat on the edge of the bank with my feet in the water and finished setting up, Steve set up behind me. 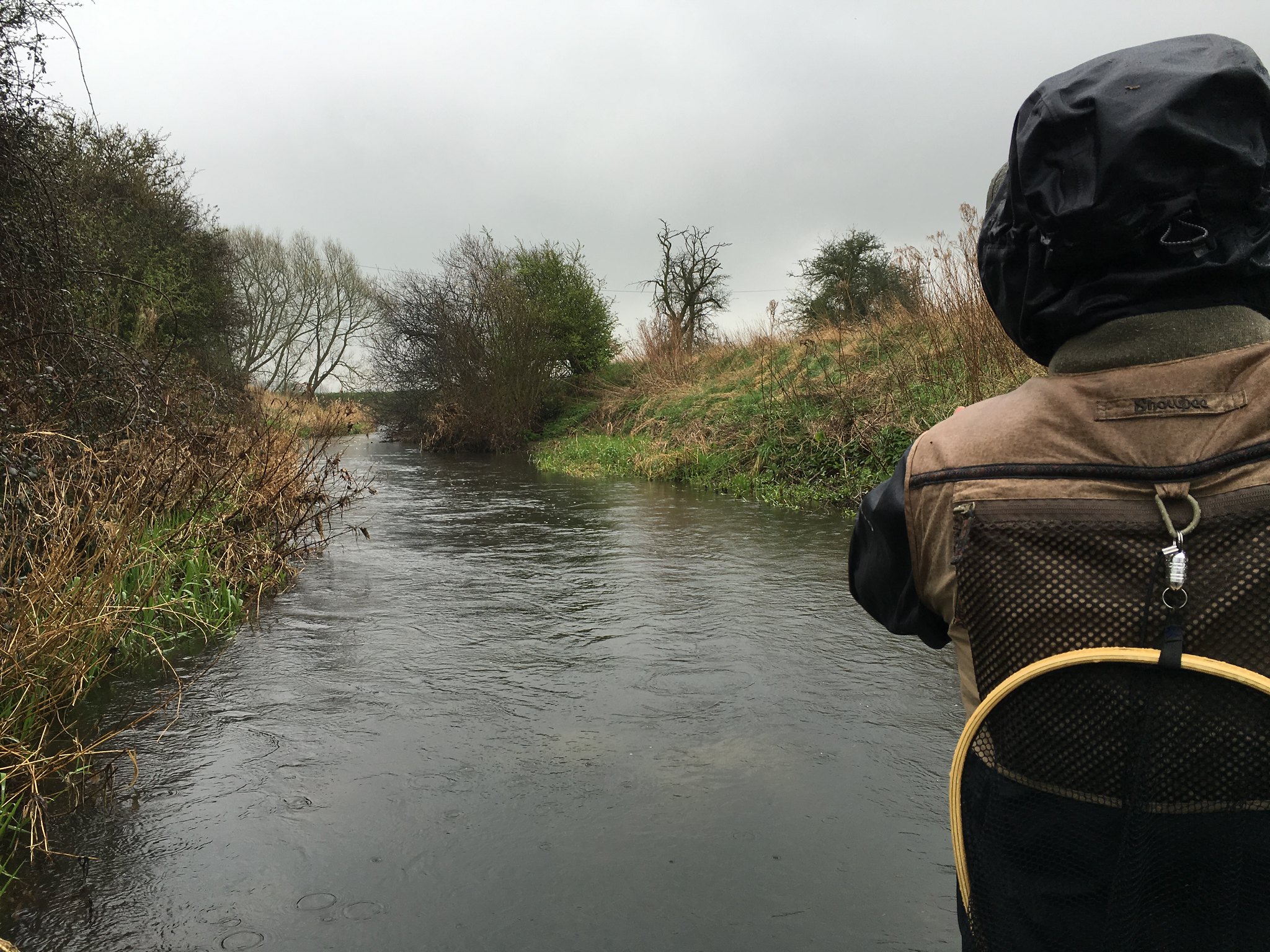 It was still raining, because of this I wanted to try a different method, well not method as such more a different set-up. Something that had caught my attention was the New Zealand indicator kit, I'm not adverse to the classical upstream nymphing and in the past it was a go to method for me, but lets be honest klink and dink has become the mainstay for many of us, myself included and I will happily admit to being lazy and frequently choosing the perceived easy option and I do have to force myself to fish other styles. So getting back to the New Zealand indicator kit, I bought the mixed selection of wool and opted to put together my own kit, I find the thought of spending thirteen pounds on what is essentially a baiting needle and silicone tubing a little excessive, especially when I had bits at home already, it was only some silicone tubing that I needed to buy.

Ultimately there wasn't really any deviation in how I would normally set-up other than the addition of a small indicator on my tippet, I still used a furled leader - they rarely get taken off. I tied on two flies, a pearly butt bloa on the dropper with a copper-bead pheasant tail nymph, the indicator can be moved depending on depth and I had mine around two feet above the dropper.

As I had spent time quietly tackling up I felt the run would have settled from any disturbances we may have caused, slipping in gently I slowly waded over to the far side. The river held a fair depth, which only heaped on the anticipation, I was sure this run would contain a few fish. Peeling line off the reel, the first cast sent the flies around ten yards upriver. It only took a dozen or so casts before the indicator disappeared, in fact I didn't see it disappear, it was the noise Steve made that caused to me to look back and notice it was no longer there, a firm lift and fish number one was attached. It fought well in the strong flow, giving the impression of a much larger fish, my day was opened with a well conditioned trout of about eight inches. 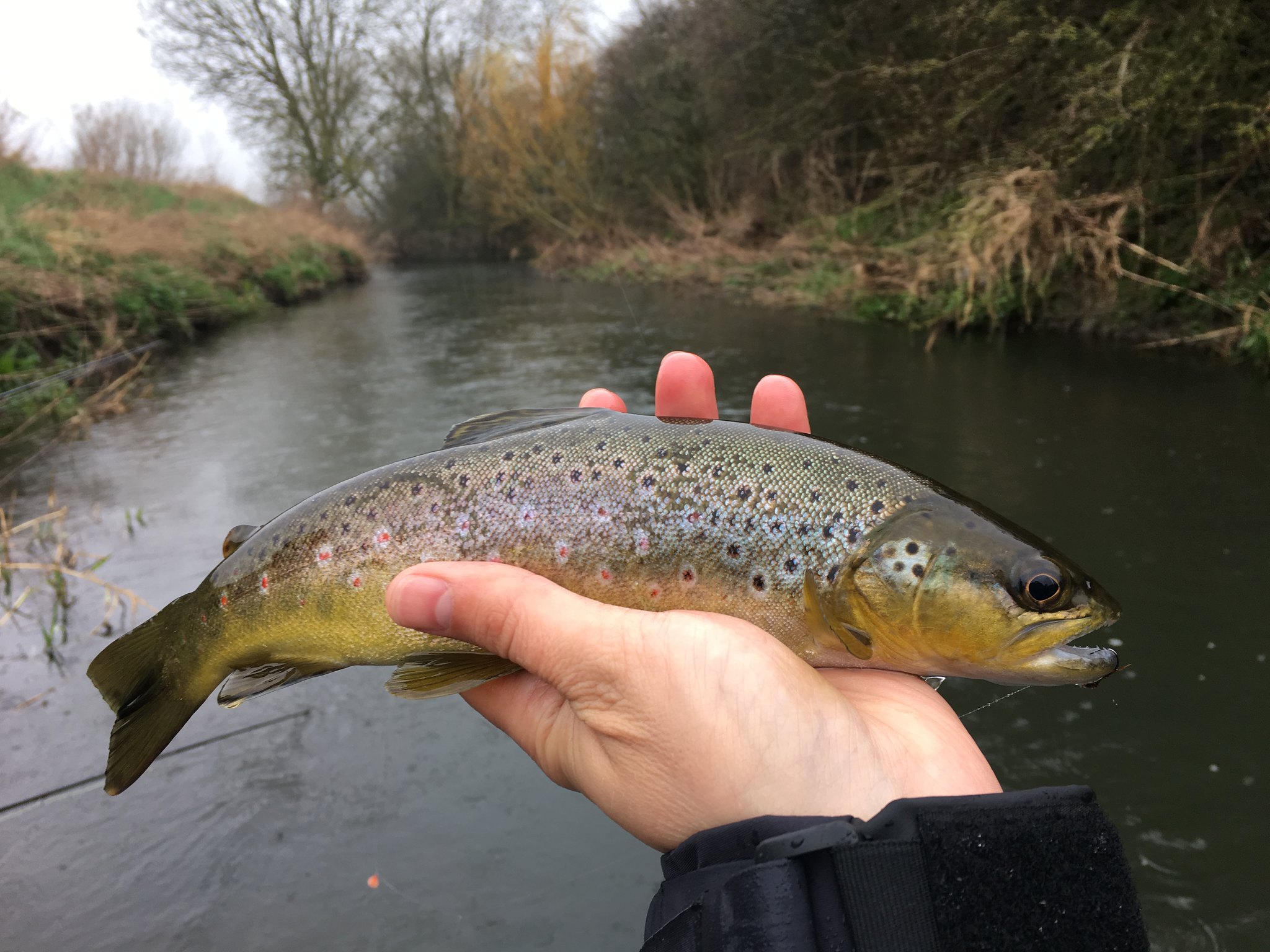 Buoyed by this early success Steve took his turn and begun making progress up the run, it didn't take long before his klink sunk from view as he hooked a trout about the same size, this one was an acrobat repeatedly jumping, I actually netted it just after it landed, a lucky catch! Swapping again - it usually wouldn't happen this quickly - I carried on, a little while longer the indicator again performed perfectly as I hooked a bigger fish. Although not as lively as Steve's fish this one jumped a couple of times as well as shooting downstream past us trying in vain to gain sanctuary in the vegetation at the side of the river. A better fish of around ten inches had us dreaming of a superb day ahead; Steve finished the run without another touch which surprised us both. 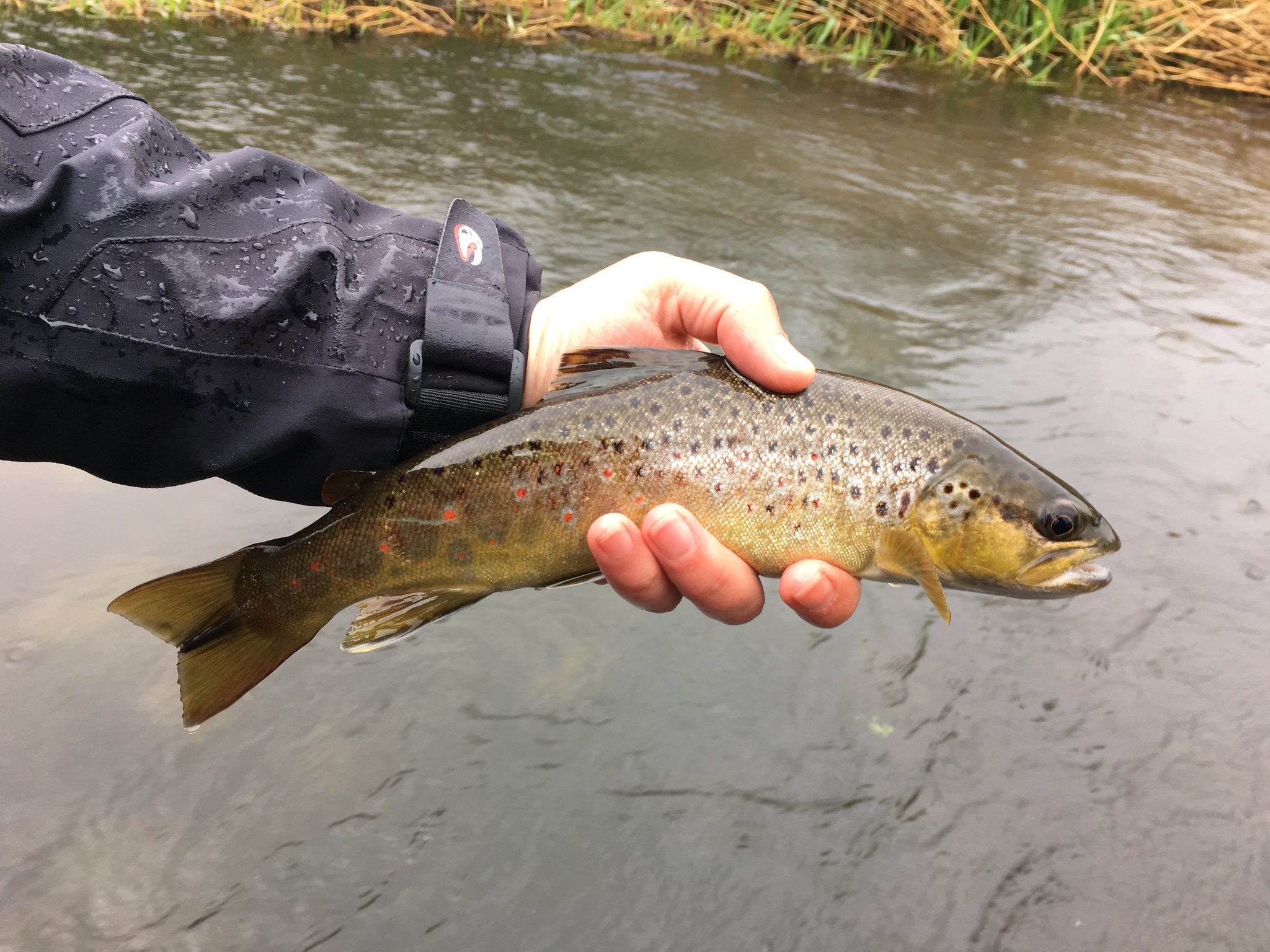 The next run was seperated from the previous by a sizable overhanging jungle, casting over our wrong shoulders was in order but a smaller bush slightly up the opposite bank meant casting was trickier than it ought to be. Steve was still trying to catch his second fish and the jungle proved too bothersome and we had to scoot past it and recommence above. I decided to do some light trimming as Steve fished up the run, I keep a small fold-able saw in my chest pack for times like these and set about opening the channel up a little more while still preserving the essence of the overhang.

While clearing out a raft of floating rubbish I was met by something quite gruesome, a dead duck was caught up among the branches, it had been submerged for a while by the looks of it. Now this was no ordinary duck, it was a drake mandarin, despite the macabre nature of the find I wasn't going to waste an opportunity; the flank feathers on a mandarin and the closely related carolina wood duck are valuable and useful. I set about plucking both sides, the feathers were still in good condition and I had a plastic bag in my chest-pack which provided me with something to put them in until I could clean them later.

Steve had fished up the next run while I had been busy, unfortunately without success and also during this time the water had coloured significantly with lots of debris coming down in the flow. Steve tried another area a little further up but things were not improving, he persisted and insisted fishing to the top of the pool. With no more success we discussed our options. I put forward to go back upstream and have a look at the upper beats, suggesting that maybe all the murk was only coming from the town and upstream above it the water may be in better condition.

A brief drive via McDonalds took us to the bridge where we started our season. As expected the river was in top condition, clear as it was on opening day. I was still one fish up on Steve so he started on the section directly above the road bridge, it took a little while before Steve struck gold and caught a small trout on his dink. My go took a little longer, I lost my flies to a sunken branch in the margins though I could see where they were because the indicator was waving around in the flow. A rising fish caused me to pluck out a Barbour Paraloop Dun from my fly box, a size fourteen dark version to imitate the large dark olives that were hatching off. The fish I saw rise wasn't fooled by my attempts as we waded past its position, another fish rose on the inside, close to the bank, a lightning cast before the rings had subsided brought the trout immediately back up as it instantly took the BPD; there's no better feeling for me than fooling a rising fish. 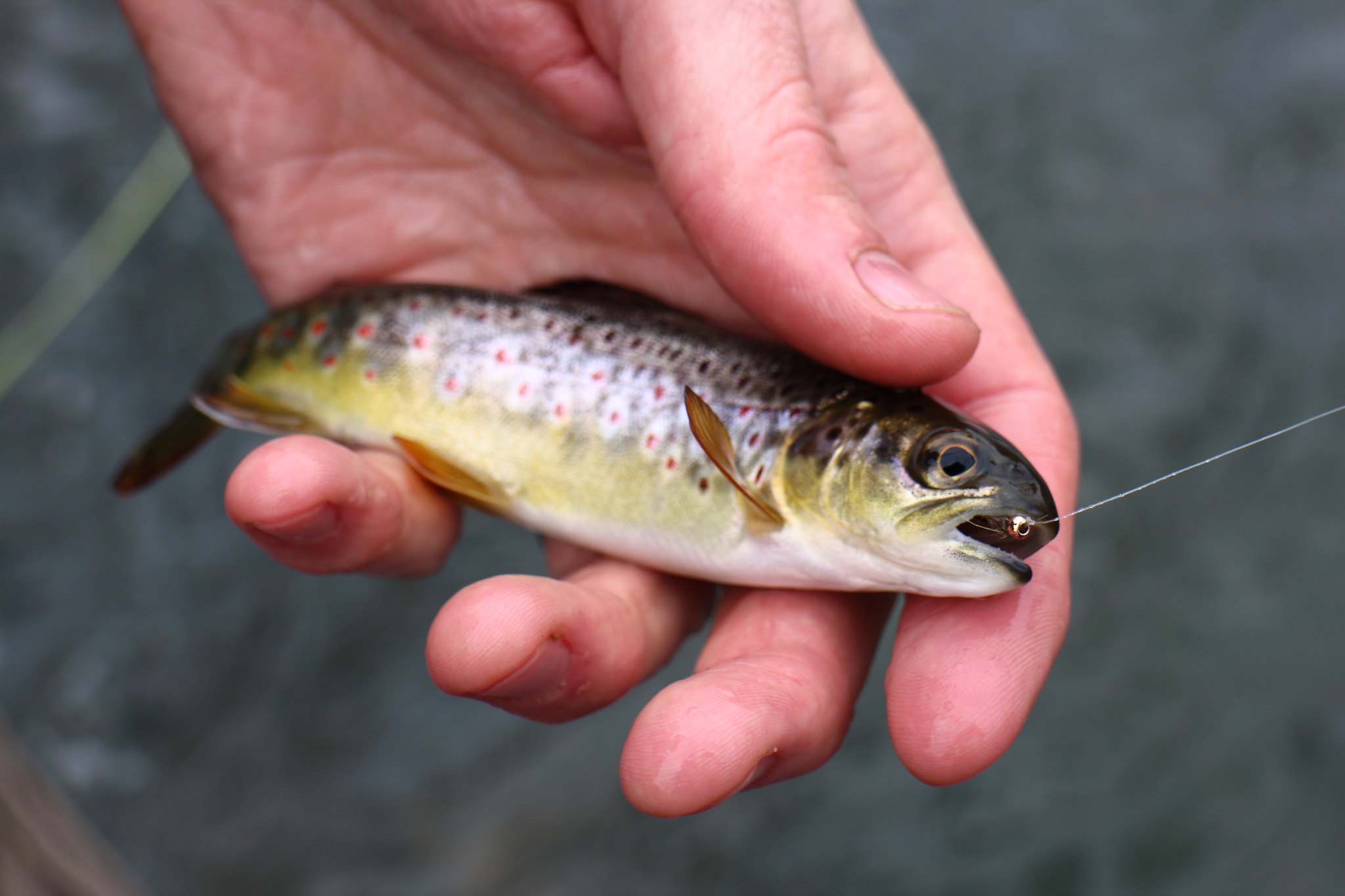 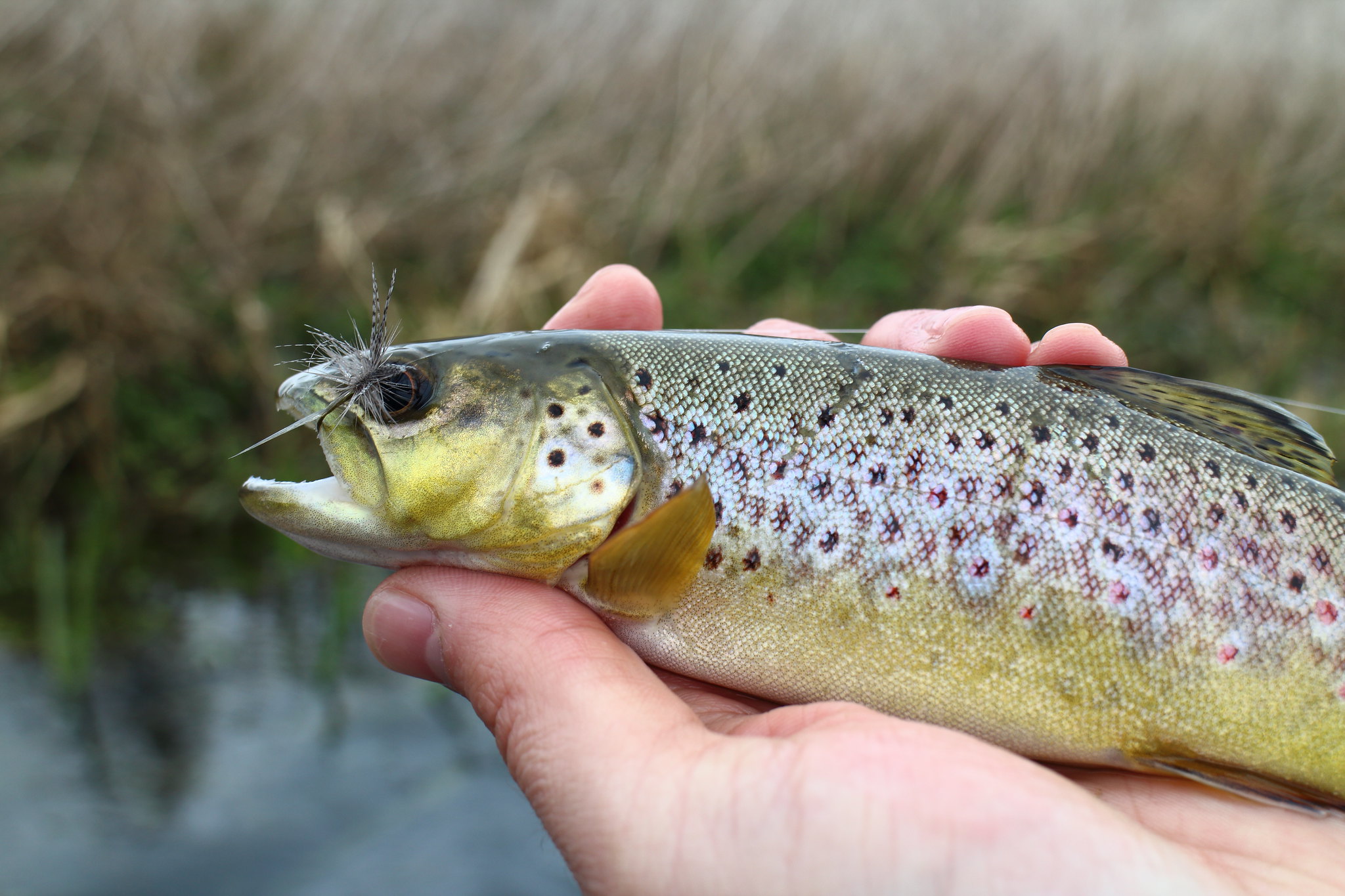 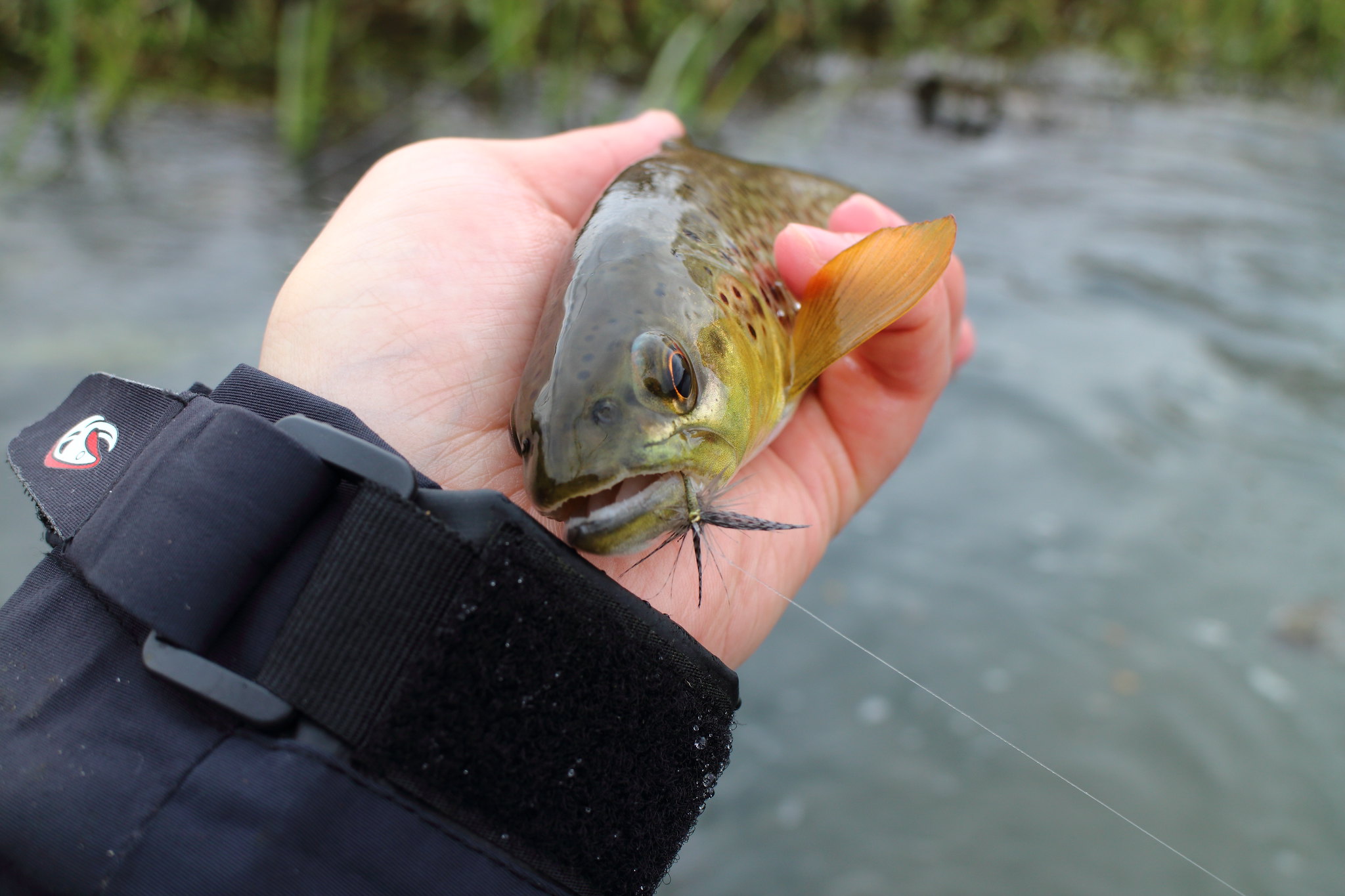 We carried on. Steve remarked how much better he had done on opening as we failed to extract anymore from what is normally a productive stretch. At the top a tributary flows into the river, spring fed, the little brook flows clear all year round and contains a lot of smallish trout, Steve diverted up there and hooked and then lost a fish in the first pool, I carried on up the main river which oddly has less water flowing through it than the brook. Working my way through a series of small pools the river here is tight and constricted, my rod really was two foot too long as I struggled not to get caught up in overhanging branches and debris hanging in the margins. Occasionally the odd cast would work and land on the water, at the tail of a short pool I landed a small trout, near the head of the pool a couple of fish were rising and after snagging up again and ruining my tippet I opted to tie on a BPD. Unfortunately I only succeeded in putting the fish down and a final hang up on vegetation told me to call it time. 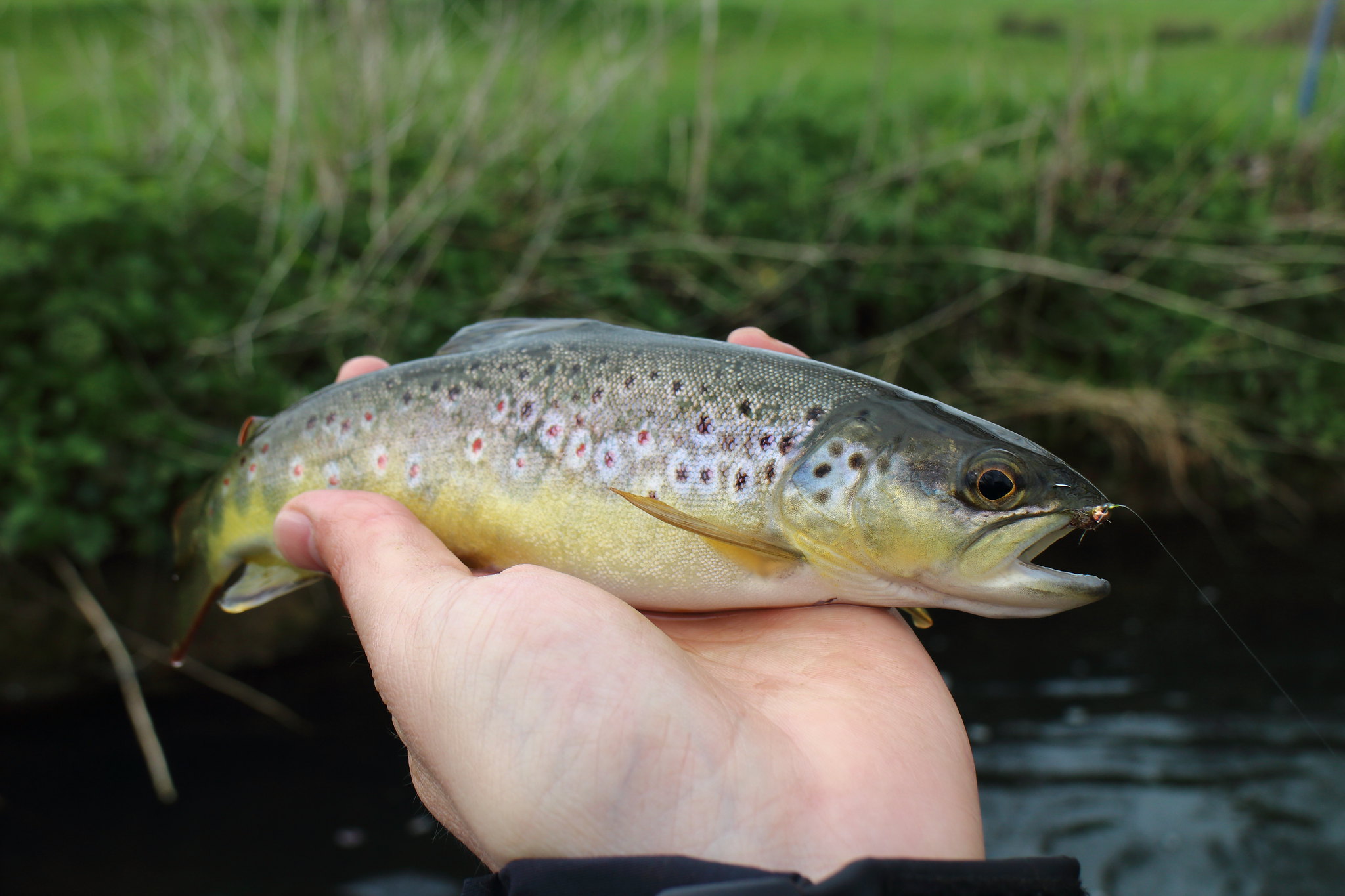 I met up with Steve who had made steady progress up the brook, he had caught two more trout which put us on evens, by this time we both needed to leave and headed back to the cars. I feel I need to conquer beat, the plan is to go back with the six foot rod and not let this stretch get the better of me.
Posted by Ben Lupton at 21:47