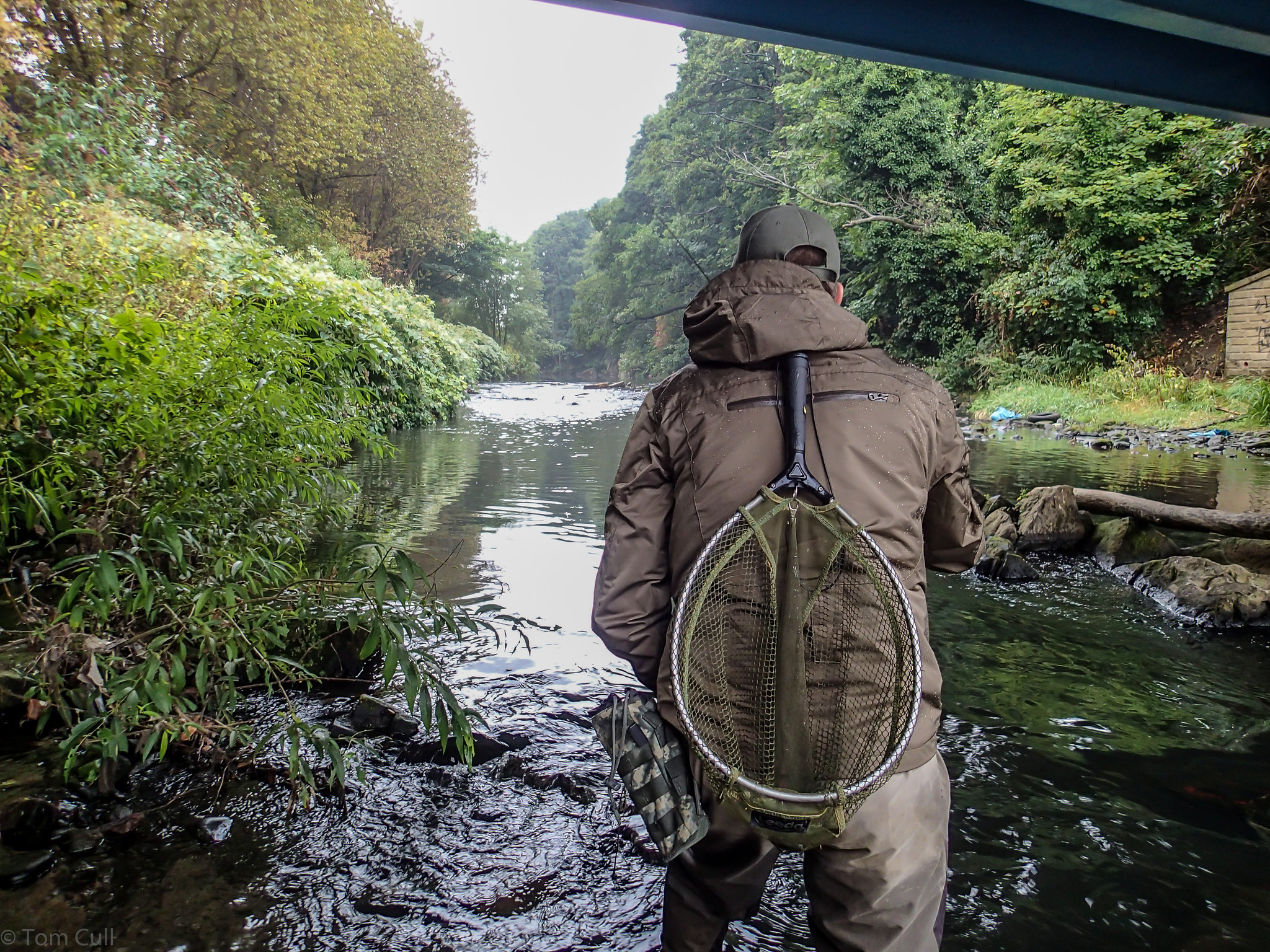 It's been hectic recently. My second child, a boy, was born a fortnight ago so priorities have shifted somewhat along with my time being taken up in fatherly duties and of course that's how it should be. However, I'm sure I'm not alone in getting itches when I don't escape for a short length of time - such is the draw that flowing water holds over me.

I was fortunate enough to have been able to take part in a friendly match in memory of Gary Hyde who sadly passed away last year. Although I had only spoken to Gary a couple of times, his posts on the flyfishingforums were always ones I wanted to read, generous with his knowledge and always friendly.

The match had been arranged by Danny and was well attended by many from the northern region; myself and Tom represented the south. The match was held in Sheffield on various parts of the River Don. Sections of the river were split in to beats, thankfully there were no fights over the stretches, Tom and I teamed up and headed to the beat that conveniently was closest to where we had all met up - no worries about finding parking. 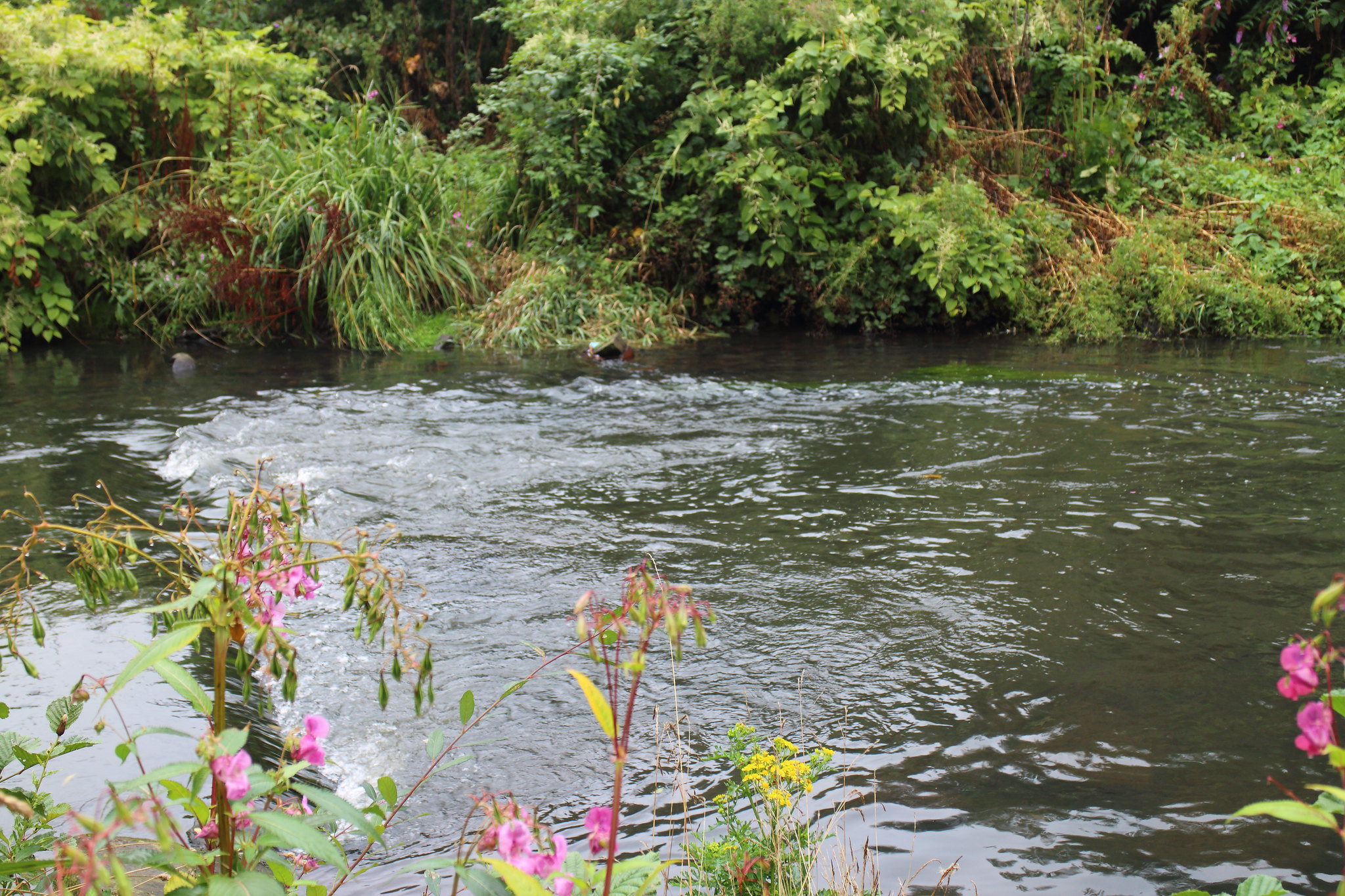 After a short five minute walk we arrived at the river, damn did it look good. Peering through the undergrowth, we spied a fish rising on the edge of a seam, in the middle of a lively run. Trampling our way through balsam and bramble progress was slow but we eventually worked a little way downstream; conveniently we found ourselves and the bottom end of another tantalising pool. As Tom had already set up he had first dibs while I quietly tackled up on the side-line, we both chose to fish a french leader although later on Tom changed over to the duo and single dry; we used each others rod depending on what tactic would suit the particular piece of water we had in front of us.

It only took a couple of minutes and half a dozen casts before Tom landed the first fish of the day, a grayling, from there on we took turns catching a fish each and passing the rod over - not the most efficient way to catch and yes although it was a competition of sorts, we were happy to be there. We both believe fishing like that is really fishing with someone, rather than both fishing near one another but not actually fishing with each other.


Our pace was slow as we worked upstream and I'm sure we could have covered a lot more river by the end of the day, but there wasn't really any rush and it was great just to be fishing somewhere different - I have only fished the River Don twice, both were winter trips, the last being a short three hour session curtailed by persistent rain and rising water. 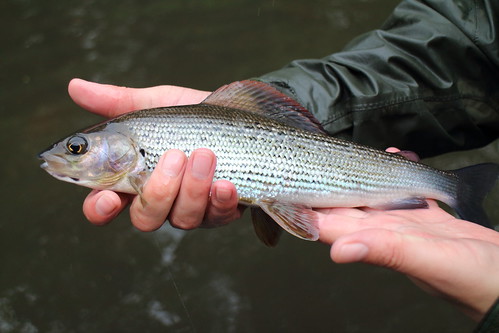 Overall we fished a tad over half a mile of river concentrating on the faster sections working our way through some superb pools. The thing that amazed us was the sense that you weren't fishing in the middle of a large city, the river was tree-lined for the most part and apart from the occasional building butting up against the river bank it was easy to forget where you were.


Most of the fish fell to small tungsten bead-head nymphs, normally I tend to only use copper beads of various sizes, this time I stepped out of my comfort zone. A white bead pheasant tail nymph as tied by Matt Eastham who drew inspiration from Gary and a biot bodied nymph with a pink bead were the stand-out flies of the day; it will be interesting to see if flies with brighter beads would work on my own club rivers which run much clearer. What we found interesting was most of the trout we caught fell to the pink bead nymph whereas the white bead nymph picked up the grayling, although I suspect this was more to do with the flies placement on the leader than the colours of the beads. 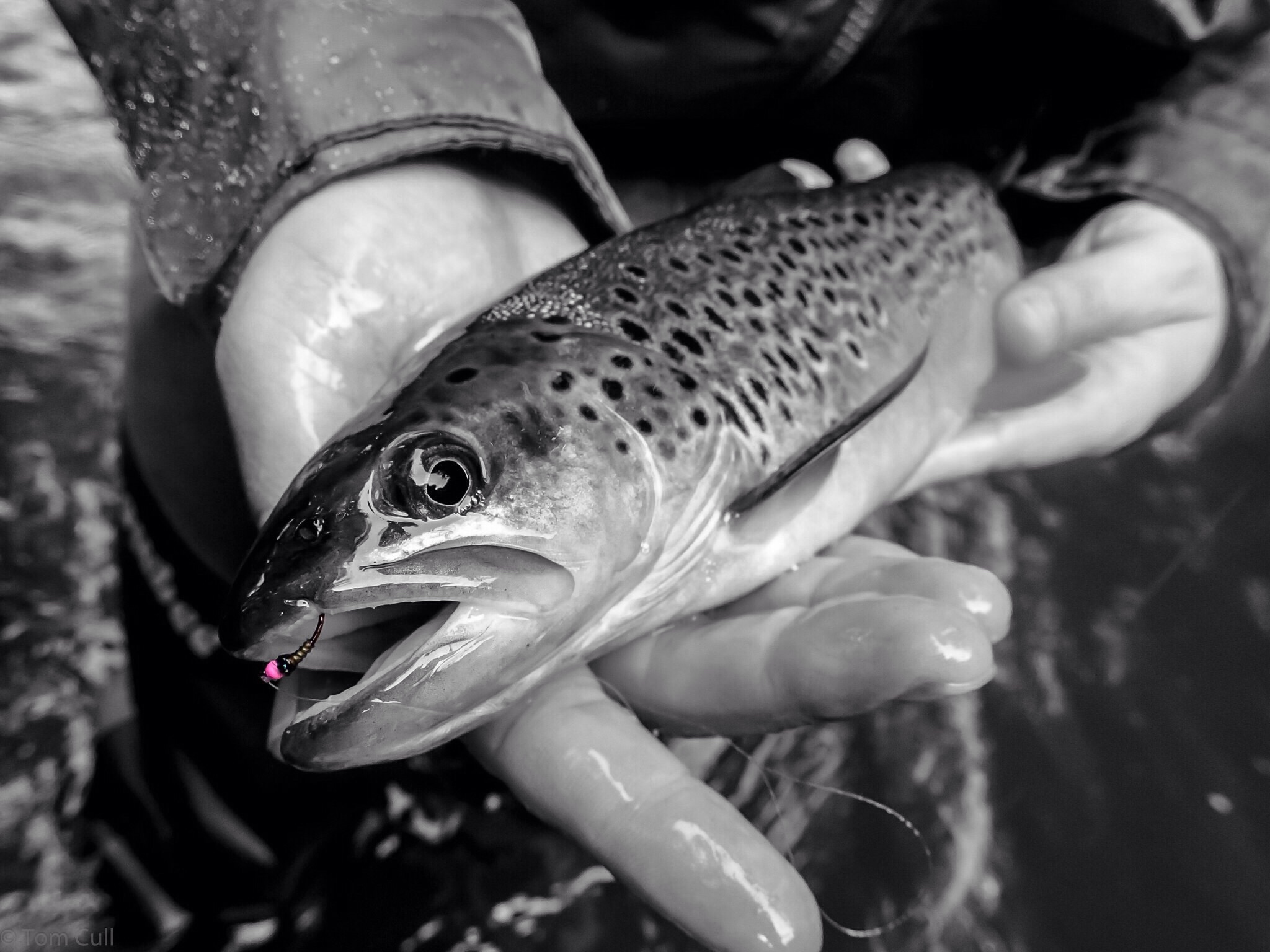 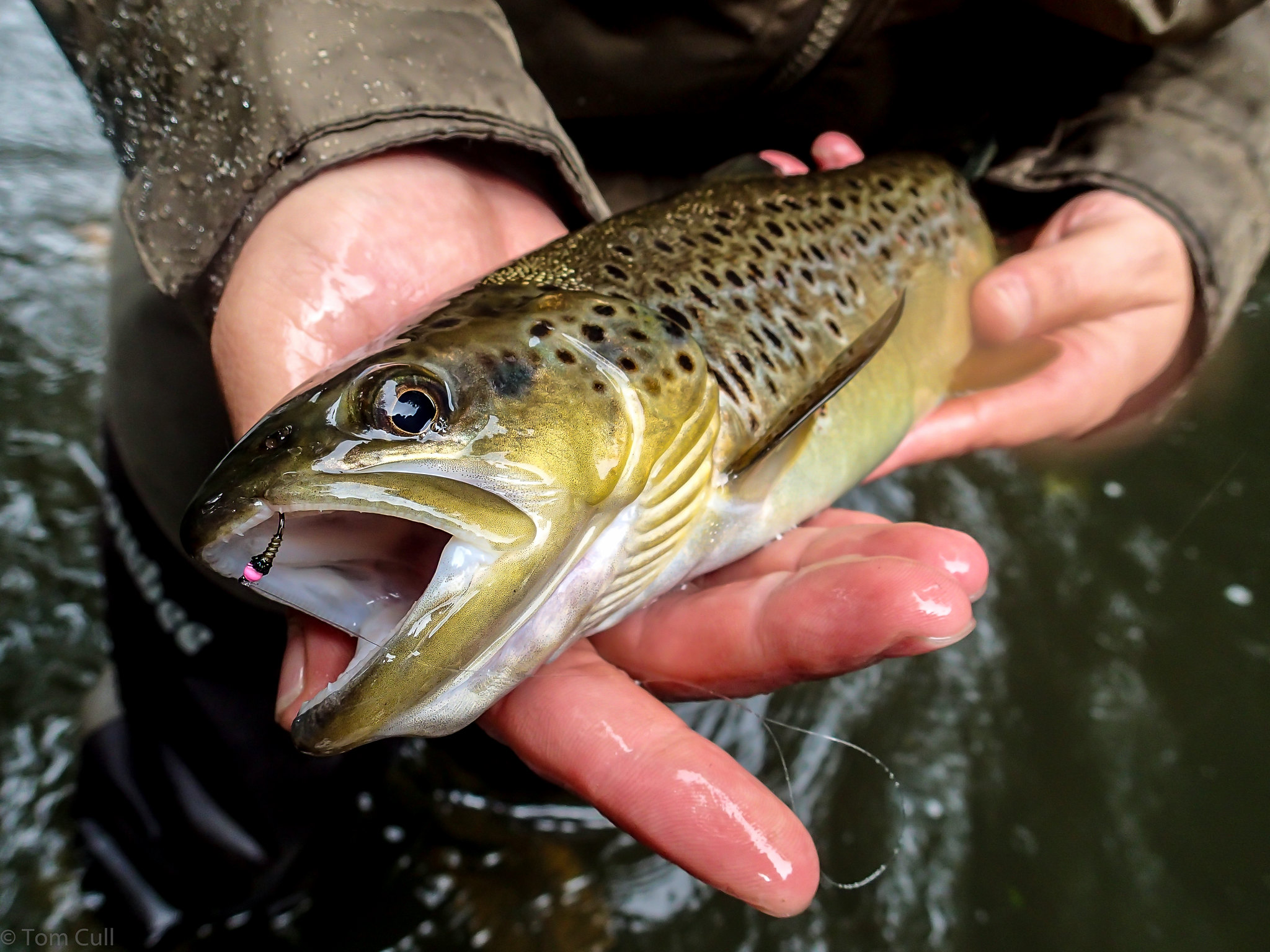 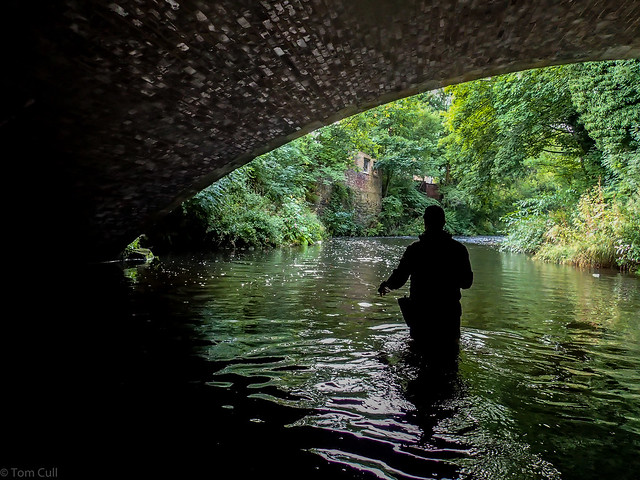 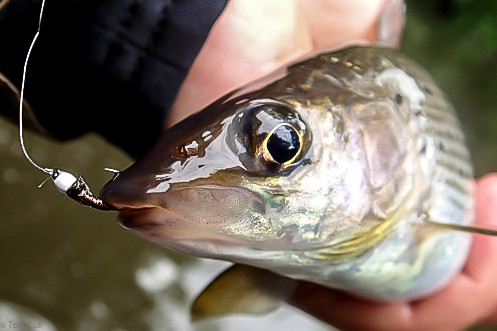 Despite it raining most of the morning we encountered rising fish, although we couldn't really see anything hatching off there were plenty of chironomid shucks floating past; later on the we fished a small hatch of second brood large dark olives - smaller than the spring hatch - but perfectly imitated by a size 16 Barbour paradun, the fish taking the midges were occasionally fooled by a size 24 (old size) black klinkhamer, we generally found the fish taking the midges particularly difficult to deceive. 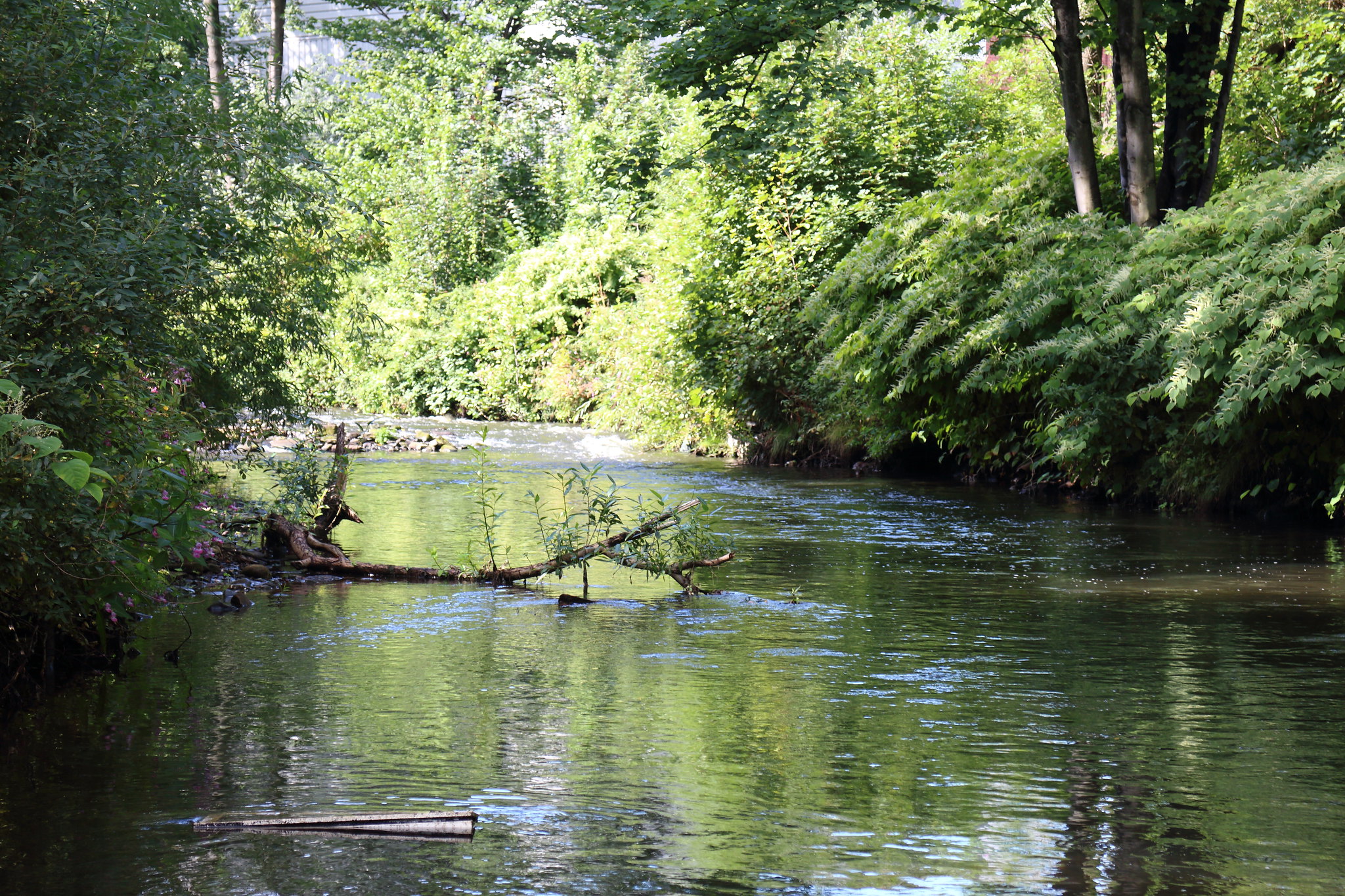 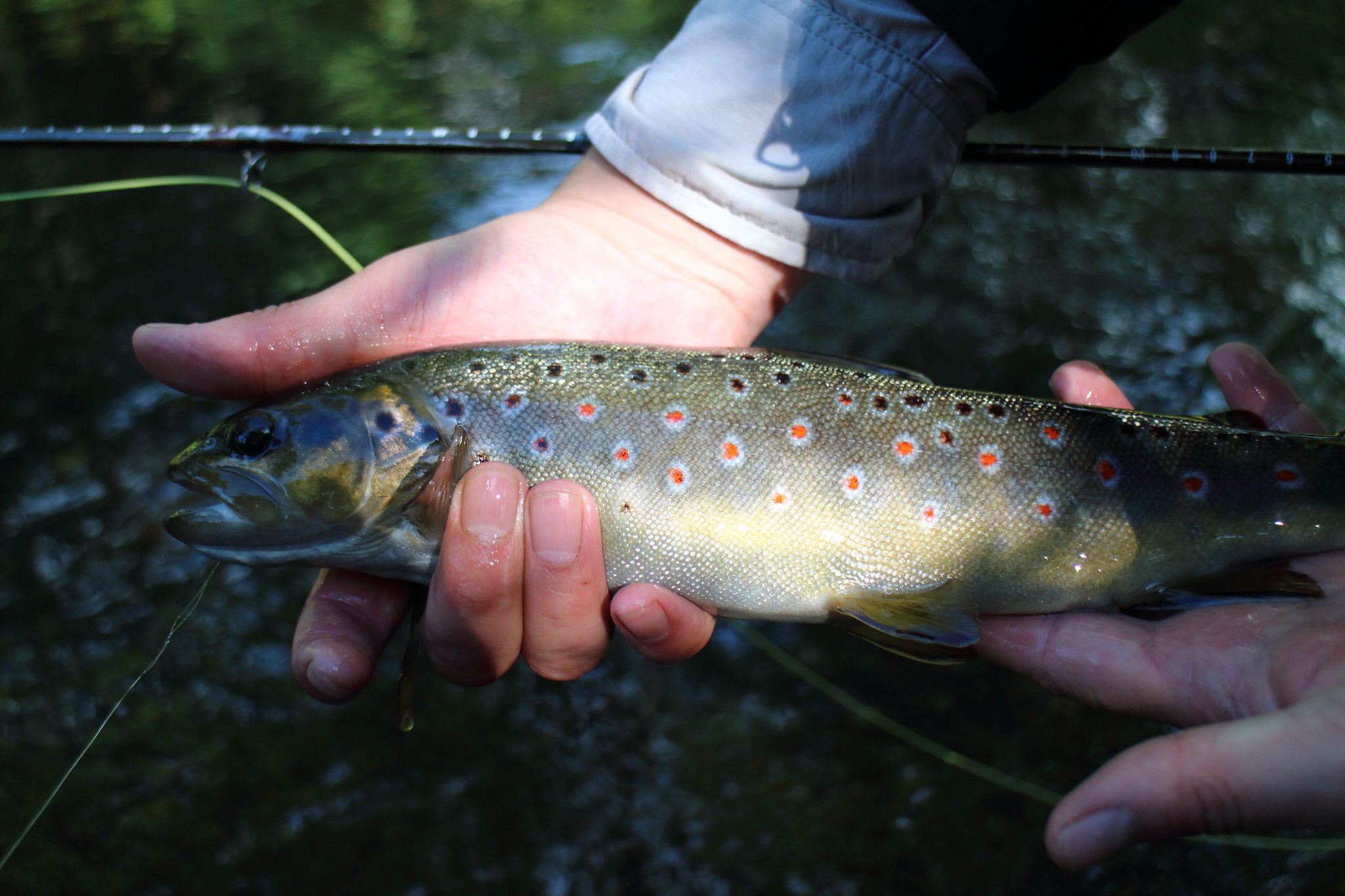 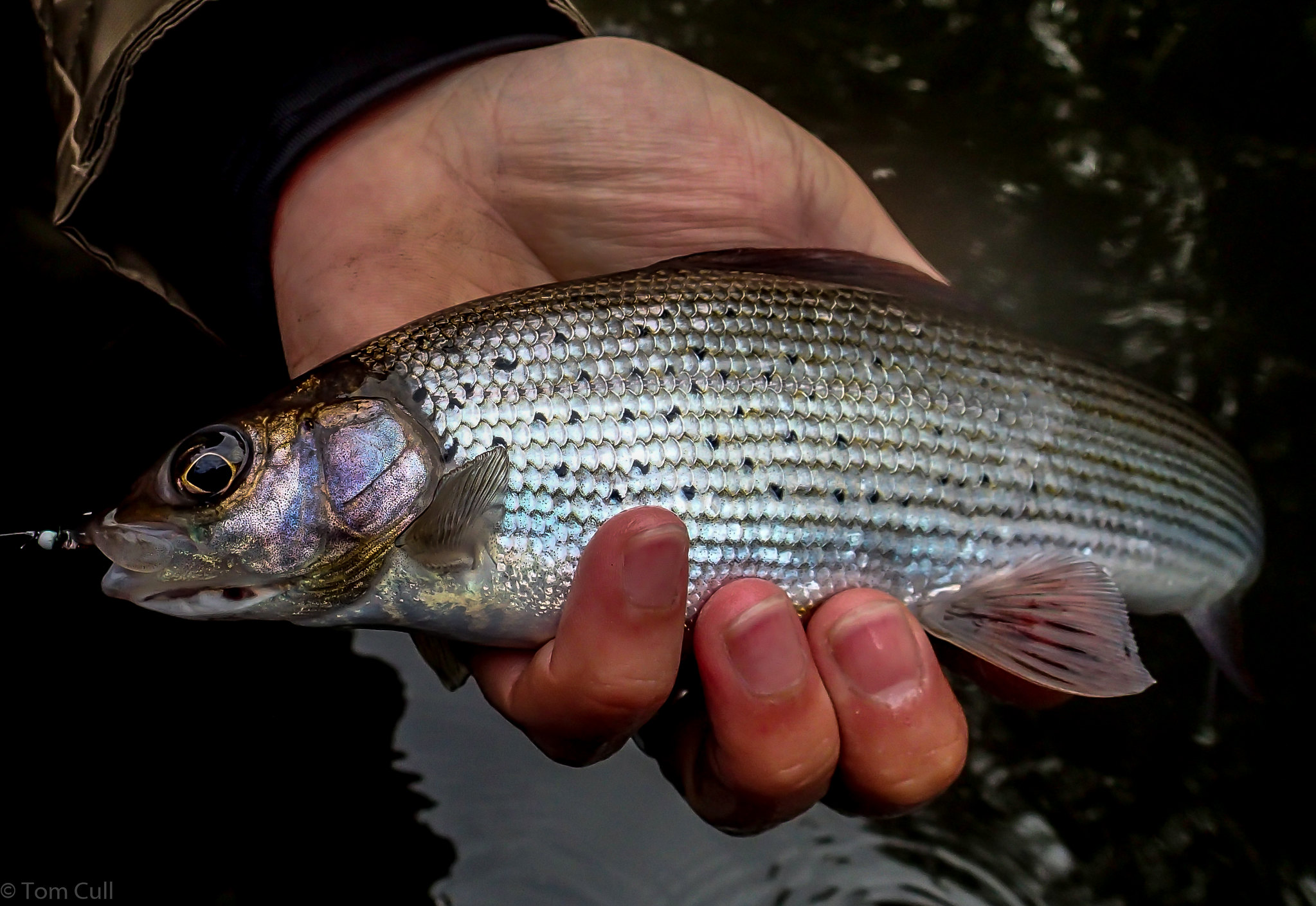 We finished with seventeen fish each, the ratio was probably two-thirds grayling; Tom caught the biggest fish, a trout of 15", unfortunately the fish didn't want its picture taken and I only managed to get a snap of it right before it fell out of his hands.

As an aside it was the first time I used a new wading jacket that I received as a birthday present. Extremely well priced, a snippet at £39.99 delivered from Caimore vie eBay and it performed exceptionally well. Despite the continued rain I didn't get wet except for when I failed to put the hood up. If you want performance at a reasonable cost then I seriously recommend you have a look at this jacket. 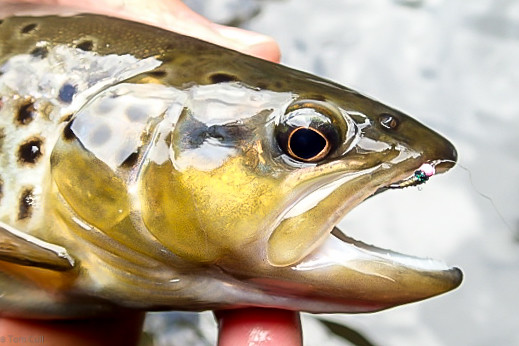 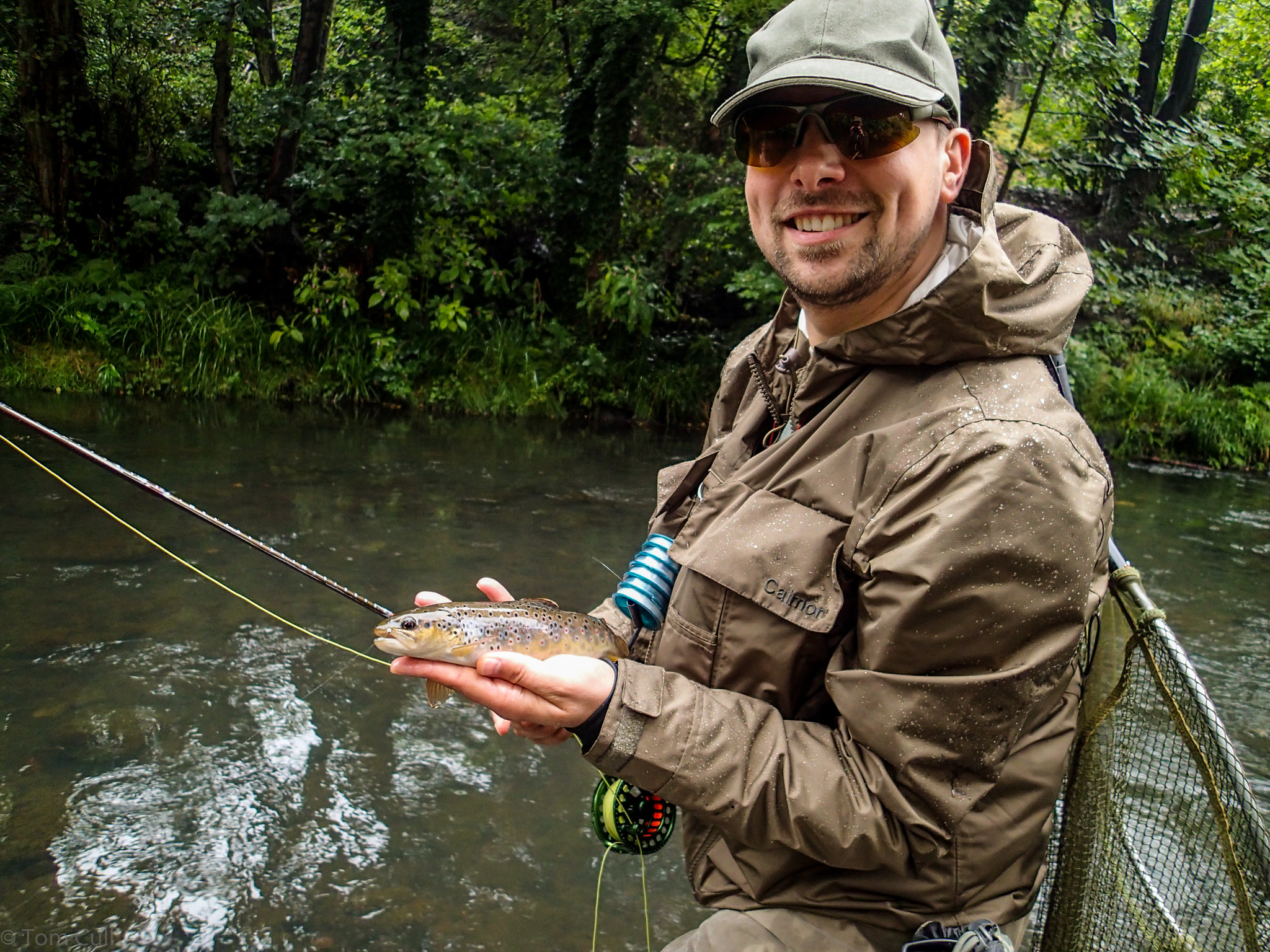 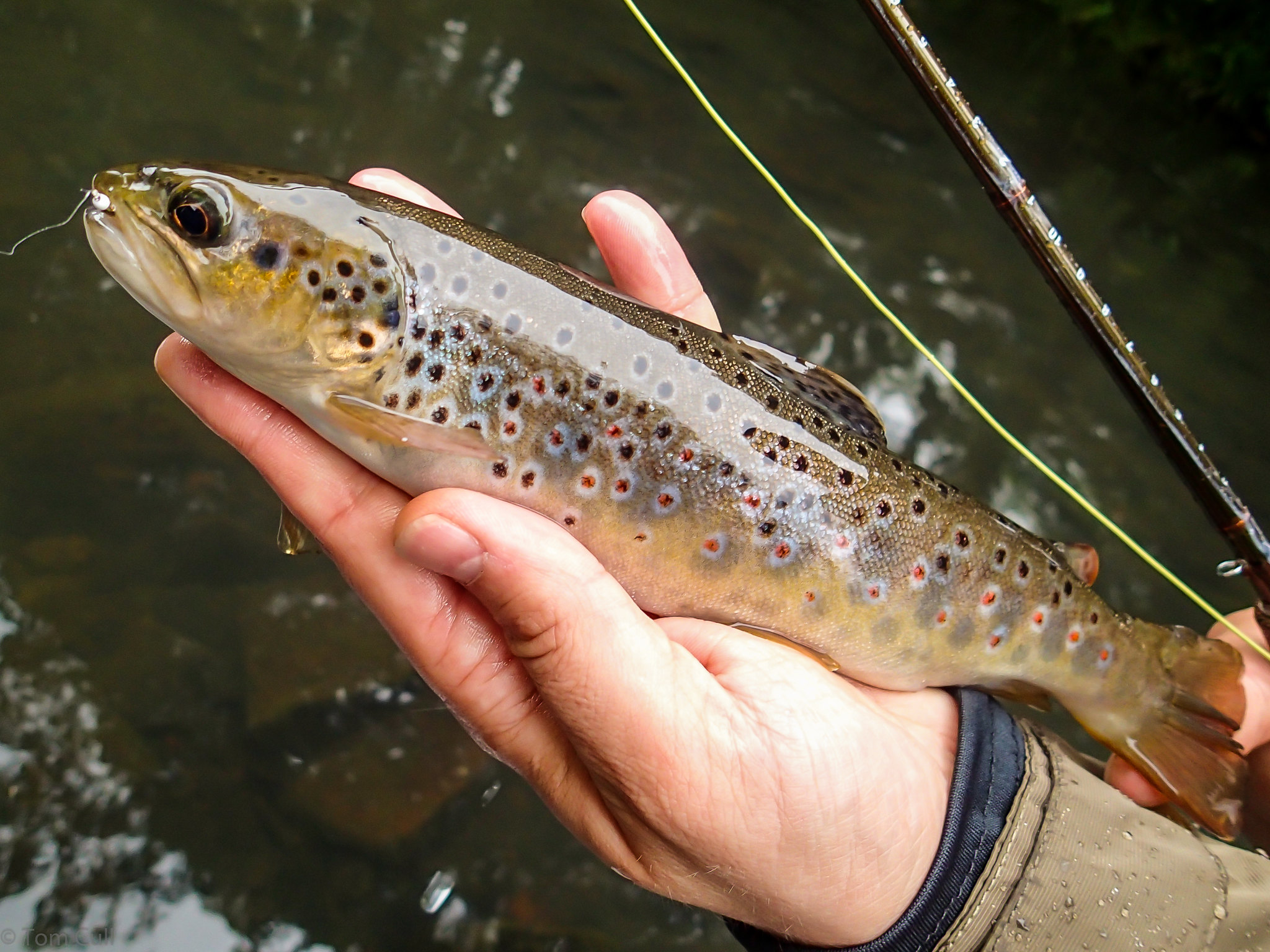