Oh the pain having to leave a river mid-hatch! 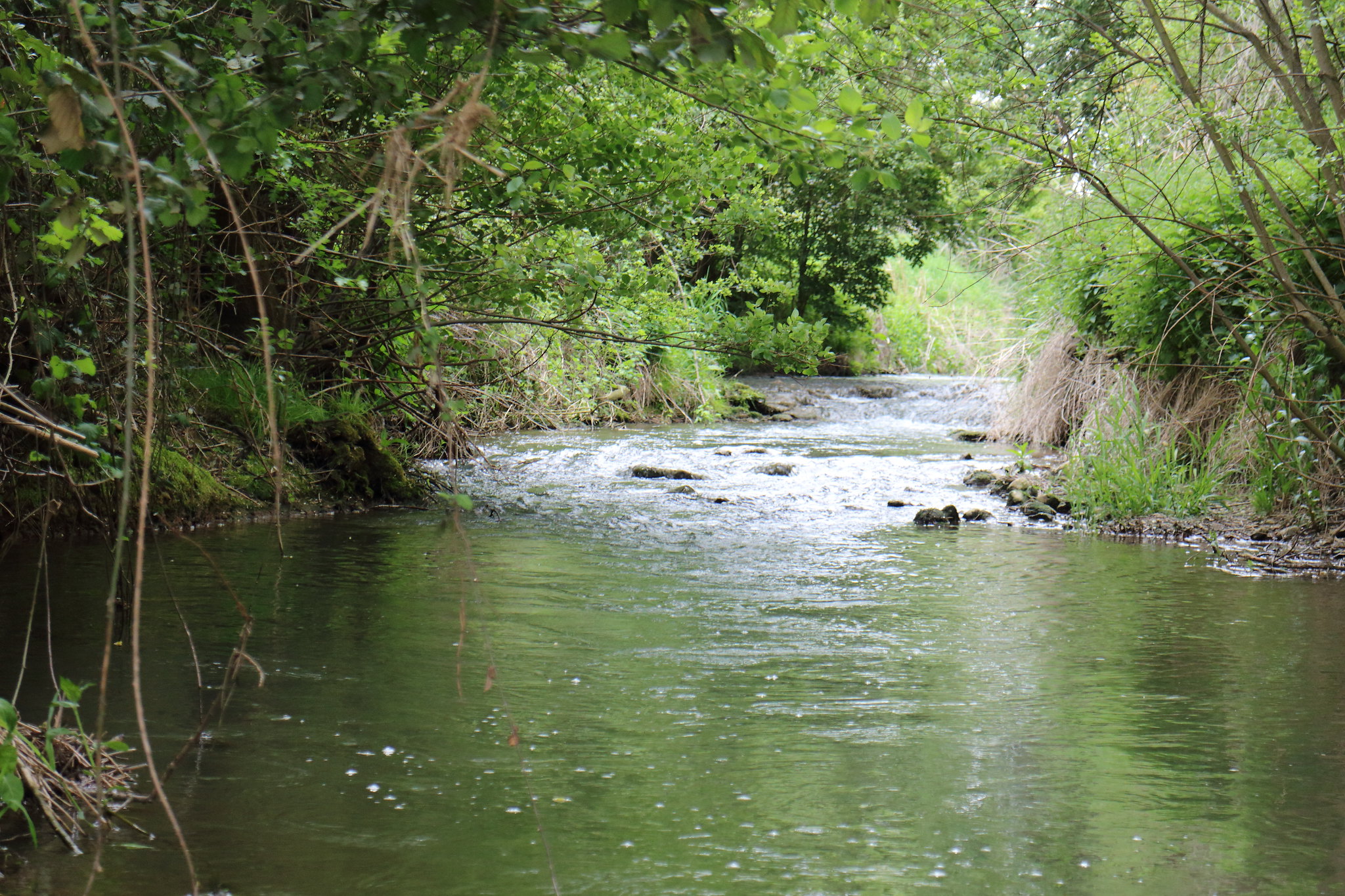 I took a trip to a different river today, it is a much smaller river that forms part of another river catchment to the main river the club has fishing on. I fished the river once last year and didn't fare too well only catching one fish. The main reason for my choice today was a stiff easterly wind, this meant an upstream wind, which should provide a more comfortable day. On arrival I found a slight tinge to the water, I hoped this would make conditions favourable. I chose to use my 6' 2# because of the close confines in parts of the river, teamed with a Waterworks Purist1 and Barrio Smallstream, this was the first time I had used this outfit together.

I started almost at the bottom of the beat just above its confluence with the main river. The river at this end is reminiscent of a freestone river, there are lots of pools and riffles despite this being a spring-fed river. As it was cold I opted to fish the duo, nothing was moving so I figured I'd cover the top with an Adams Klinkhåmer and the bottom with a JP Pupa. The pool I started on looks so tantalising, yet twice in a row it has failed to produce a single fish. It wasn't until further up that I finally caught a fish, a sprightly little six incher to the JP Pupa. 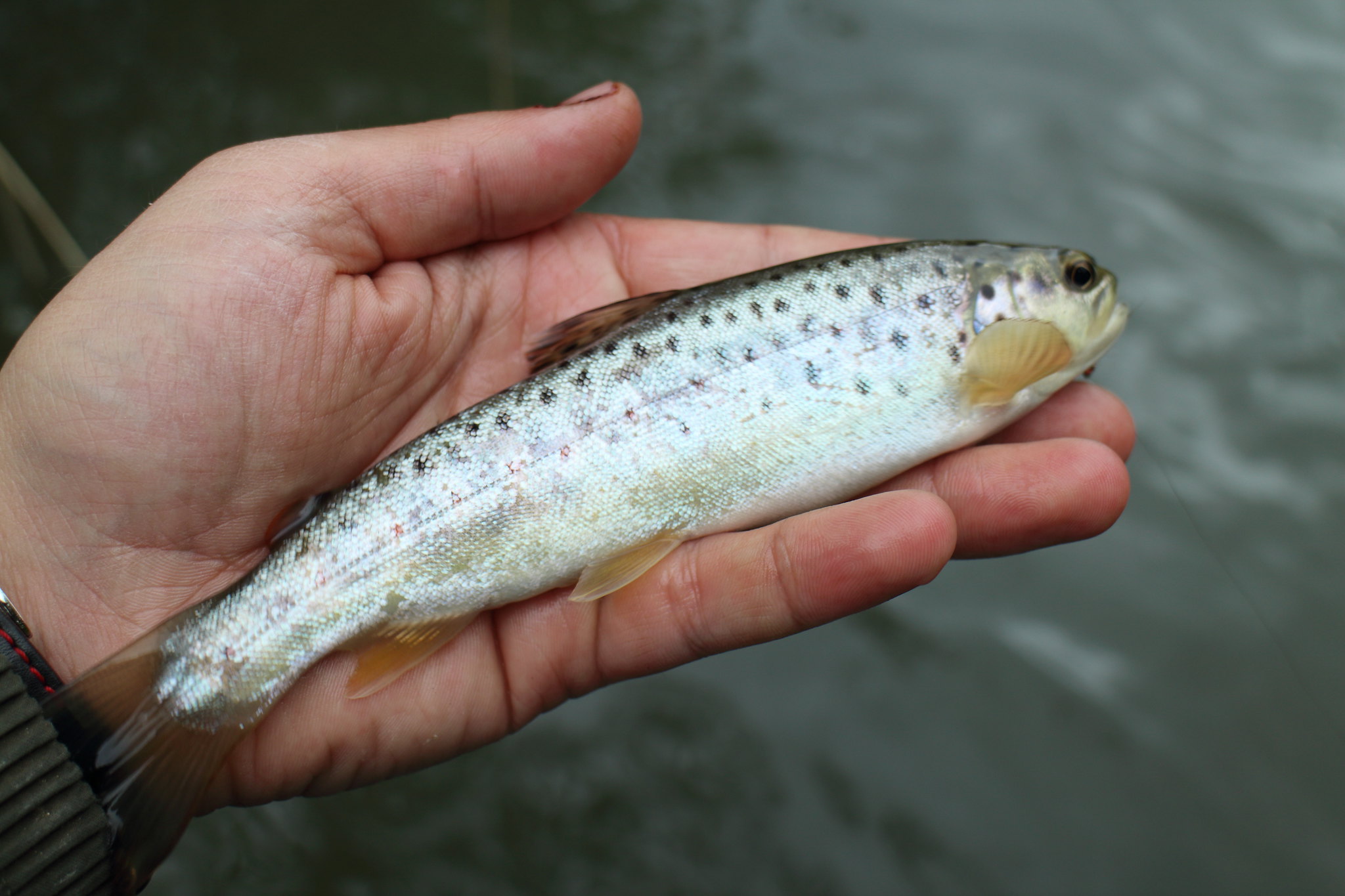 Next pool up produced two more fish, a slightly bigger trout again to the JP Pupa and a plump twelve inch fish that engulfed the klinkhåmer like is was its last meal. Just up from the main pool the current sweeps to the right hand bank and cuts a small deep hole under the bank before it flows into the pool proper. A deft cast placed the flies into the fast water, the current took the flies along the edge of over-hanging vegetation. As the flies drifted down, the line stabbed forward and it tightened violently snapping instantly. This was 0.15mm tippet - that has never happened - I have landed 6lb fish on 0.129mm tippet, but the 0.15mm tippet snapped like cotton. I wasn't disappointed, but I left the pool in awe at the power of that unseen fish. 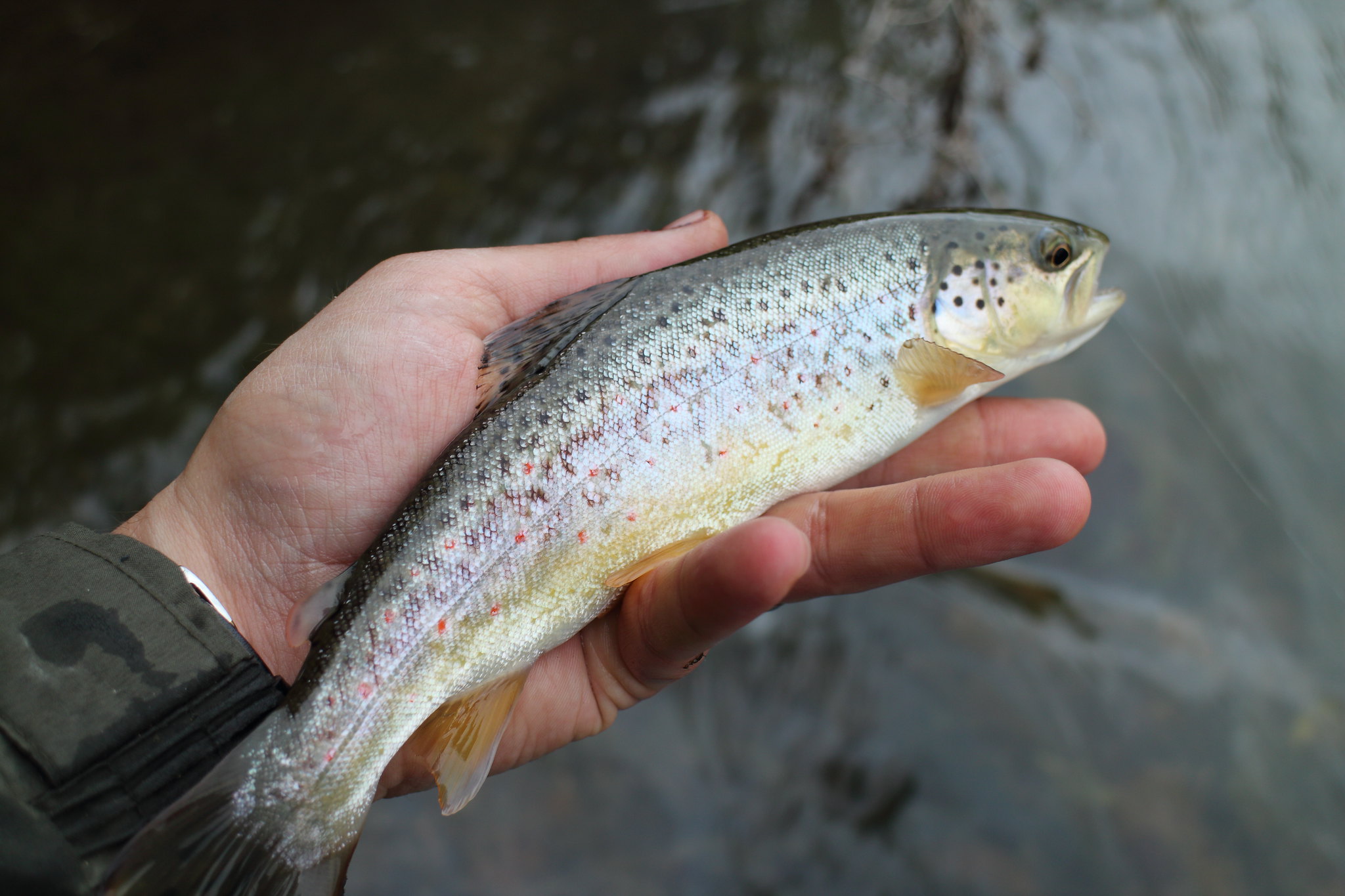 Continuing up the river the next fish took the JP Pupa and led me a merry dance for over five minutes; the rod coped brilliantly, hooped over but with plenty of grunt in the butt. At 16 1/2", this trout was the biggest of the day and it gave a great account of itself, I was truly made. 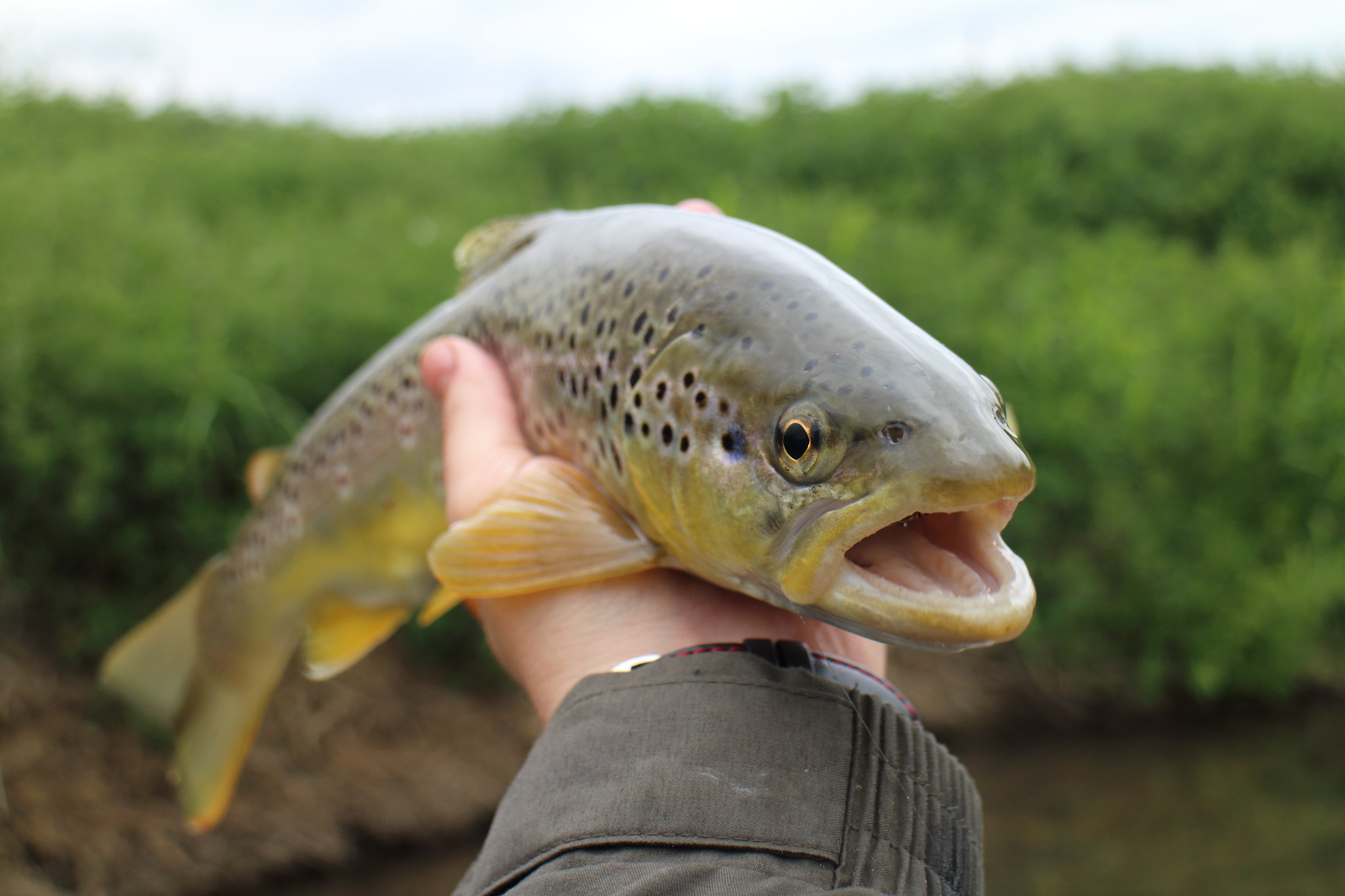 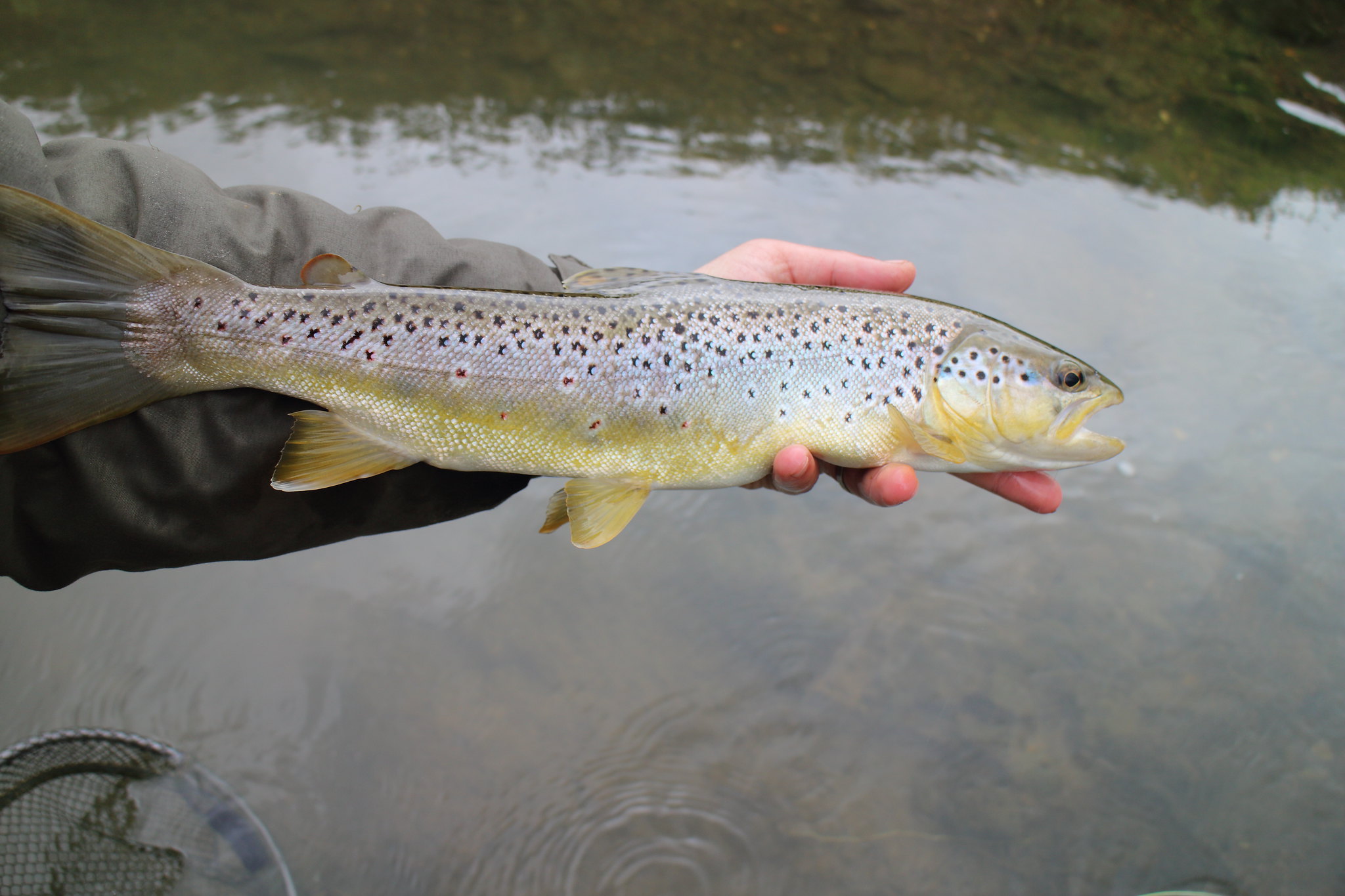 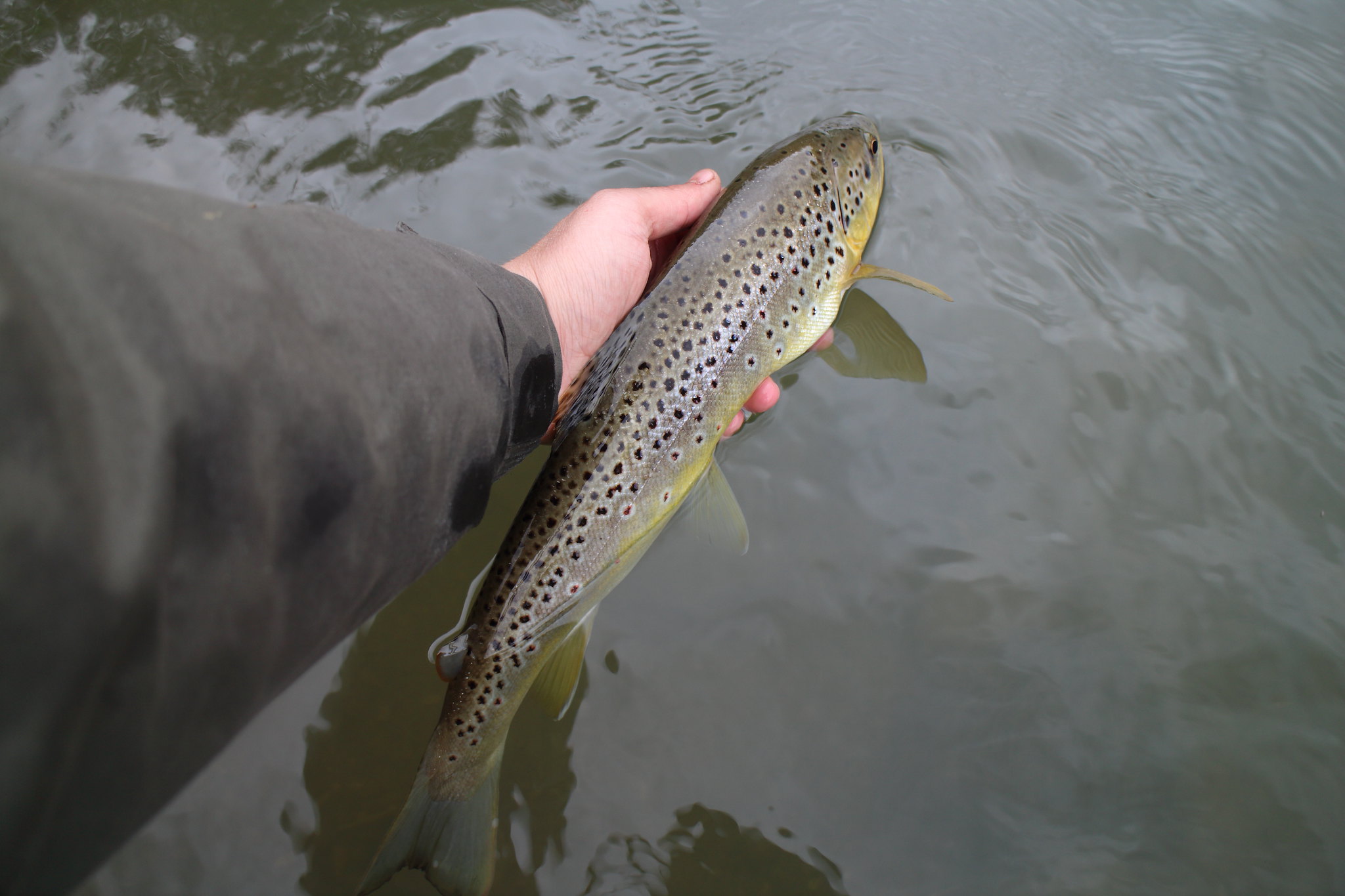 Above where I caught the the 16" fish, the current flowed against the left hand bank, a drift close to bank proved perfect as the klinkhåmer disappeared in a vicious swirl. Another great fish at 15" wasn't much smaller than the last. These fish fight dirty though, they make the most of any over-hanging vegetation, undercuts and generally anything they can try and snag you up on. The day really was becoming great. 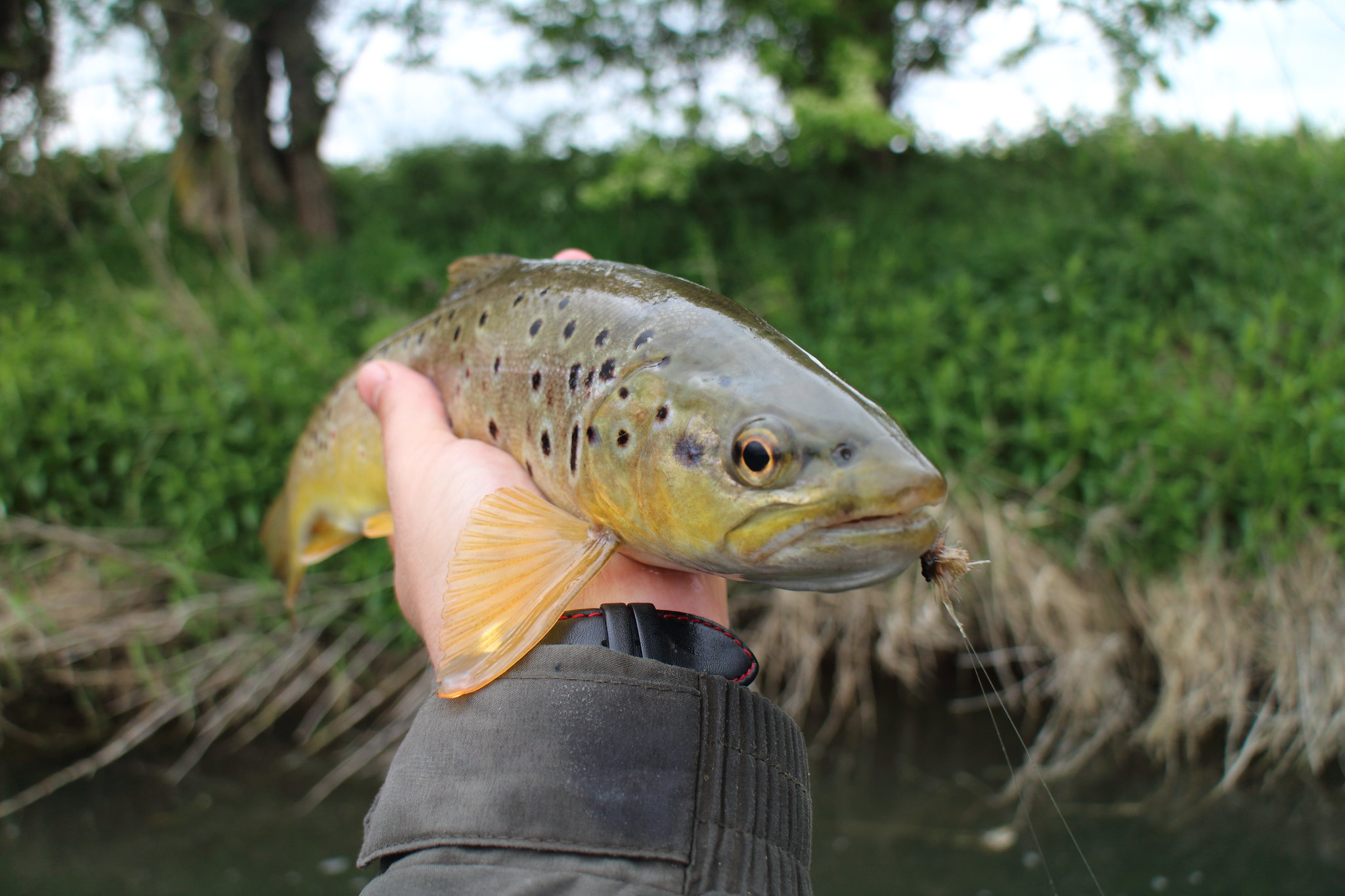 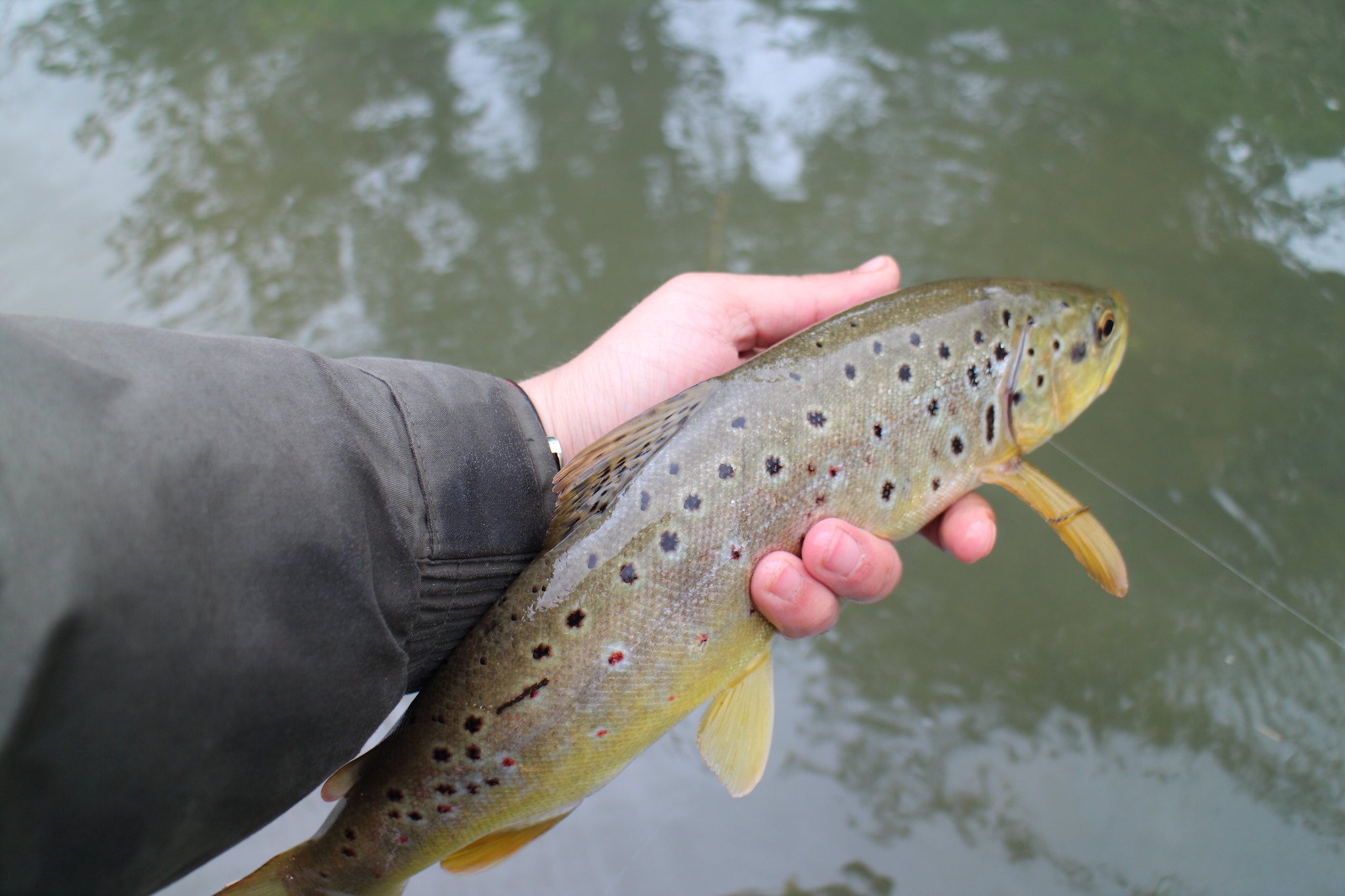 I continued up the river without much success, there were very few flies hatching and even fewer fish rising.

Arriving at a really deep pool, it was just the sort of place that might yeald a truly monster trout to a streamer, As it happens I caught two fish from the pool, a smaller fish that came off just as I was about to land it and a trout measuring 13" that took the klinkhåmer at the head of the pool.

As the day progressed more duns began hatching off, I even saw a mayfly dun hatch that was promptly nailed by something small in the edge of the river.

A little further up I came a across a full-blown hatch and lots of rising fish. The duns were small, a size 18 Barbour Paradun imitated them perfectly and I caught several more fish as well as loosing a few. It was great to be able to target individual rising fish; of course more fish were put down than caught, the upstream wind that helped with casting the light line now straightened things too much and drag became a major problem, inventive casting was employed and many wiggles added. I forgot to take any pictures of the fish, they were all between 7-10", but I did manage a couple of scenic shots. 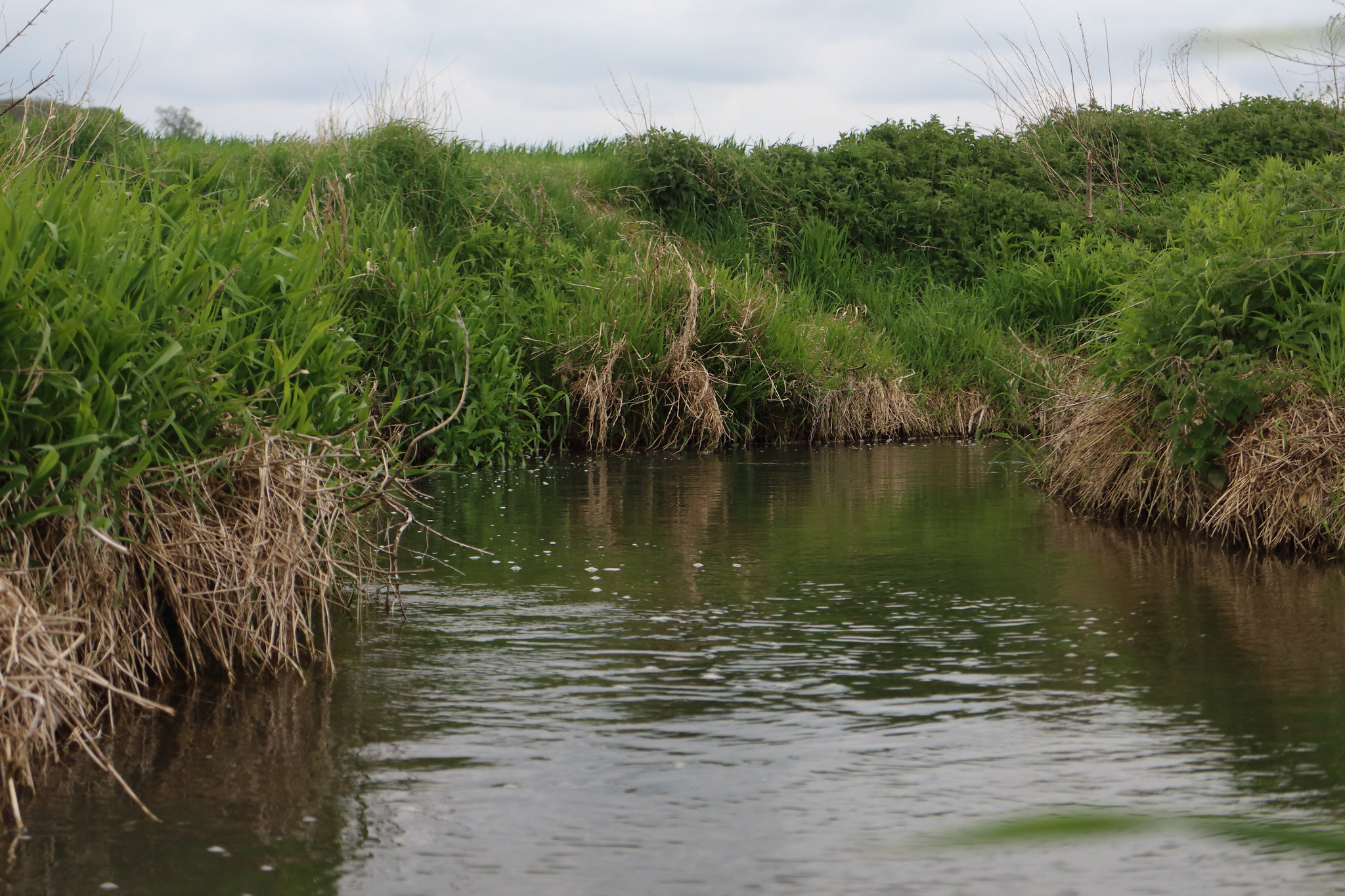 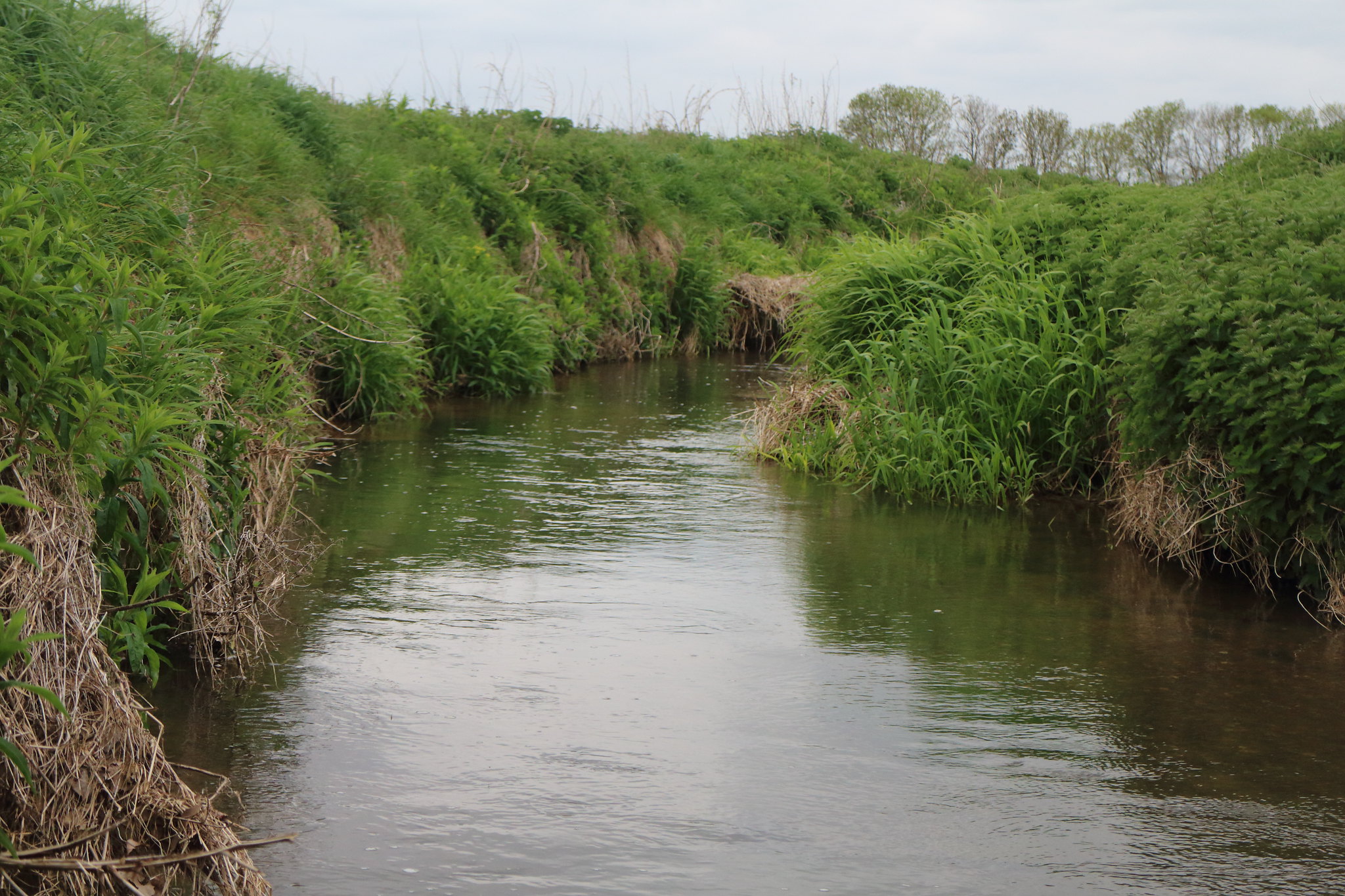 I was having a ball, but time was running out, my daughter needed picking up at half four and I was about forty-five minutes away. It was hard pulling myself away, flies were still hatching, fish were still rising - there's always next time; I really like this river.
Posted by Ben Lupton at 22:41