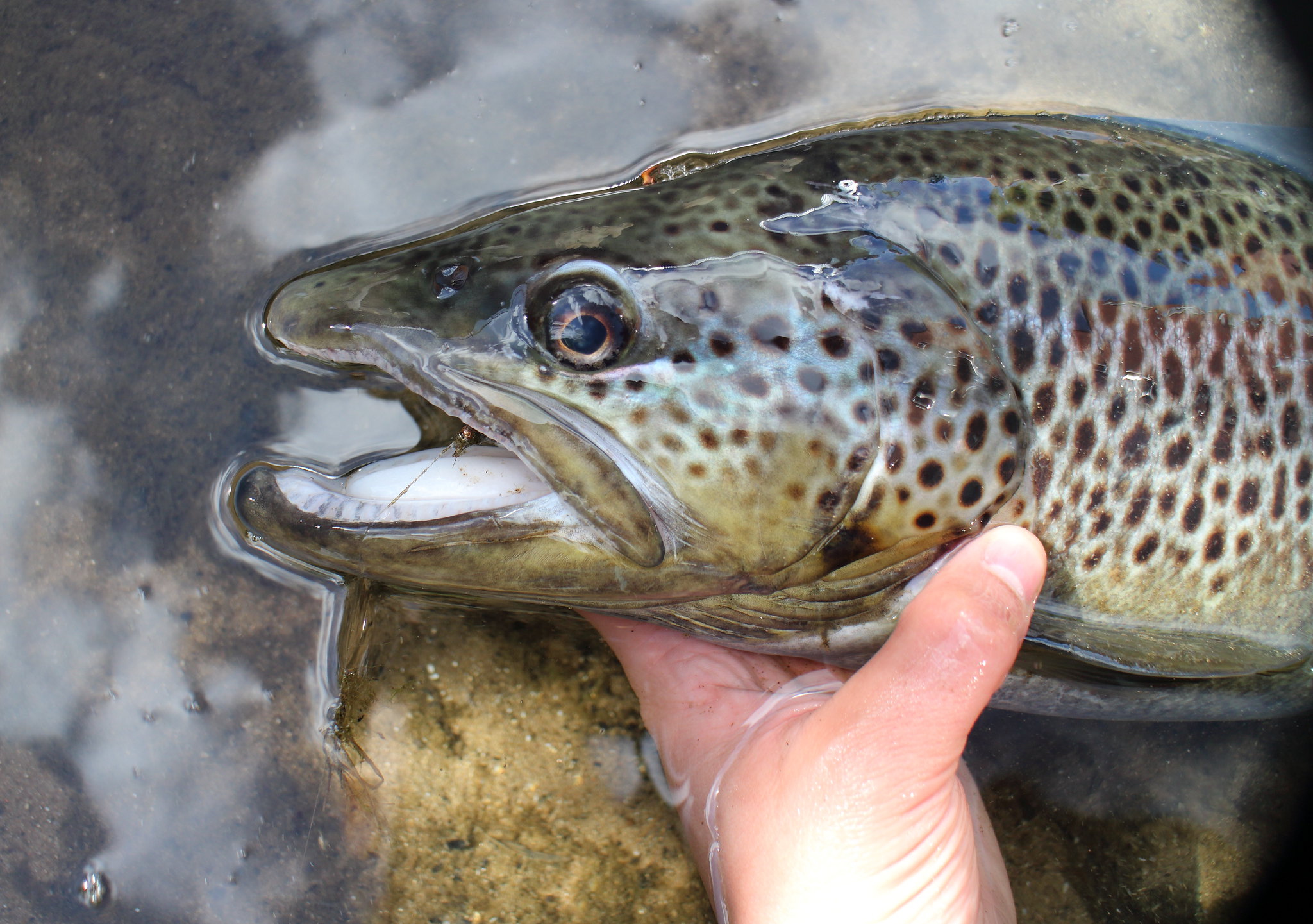 An uncertain forecast this week meant I cancelled plans to fish the Derbyshire Wye with Mike; as it turns out the weather was reasonable and I had the chance to fish all day today. An early start saw me drop my daughter off at the childminders at quarter to seven, then an hours drive to the river. On my way I couldn't decide where to fish, I had unfinished business on a couple of beats but settled on checking out the urban stretch.

I haven't seen my nemesis since September, even on the occasional visit during the winter for grayling and coarse fish, I still didn't see it. Today was no different, I fear the fish has been removed leaving me only with the memory of hooking and loosing it and the exasperation of pulling a fly out of its mouth, but I can only hope I am wrong.

The last time I visited the urban stretch I took Steve for a tour, I told of a large fish that I'm certain went for Steve's fly even though we were sure it was spooked. Today I found that same fish, very dark from the top it was tucked under the concrete edging upstream of a bridge. Now most people would agree that a trout laying motionless on the bottom isn't a fish that will likely take your fly. 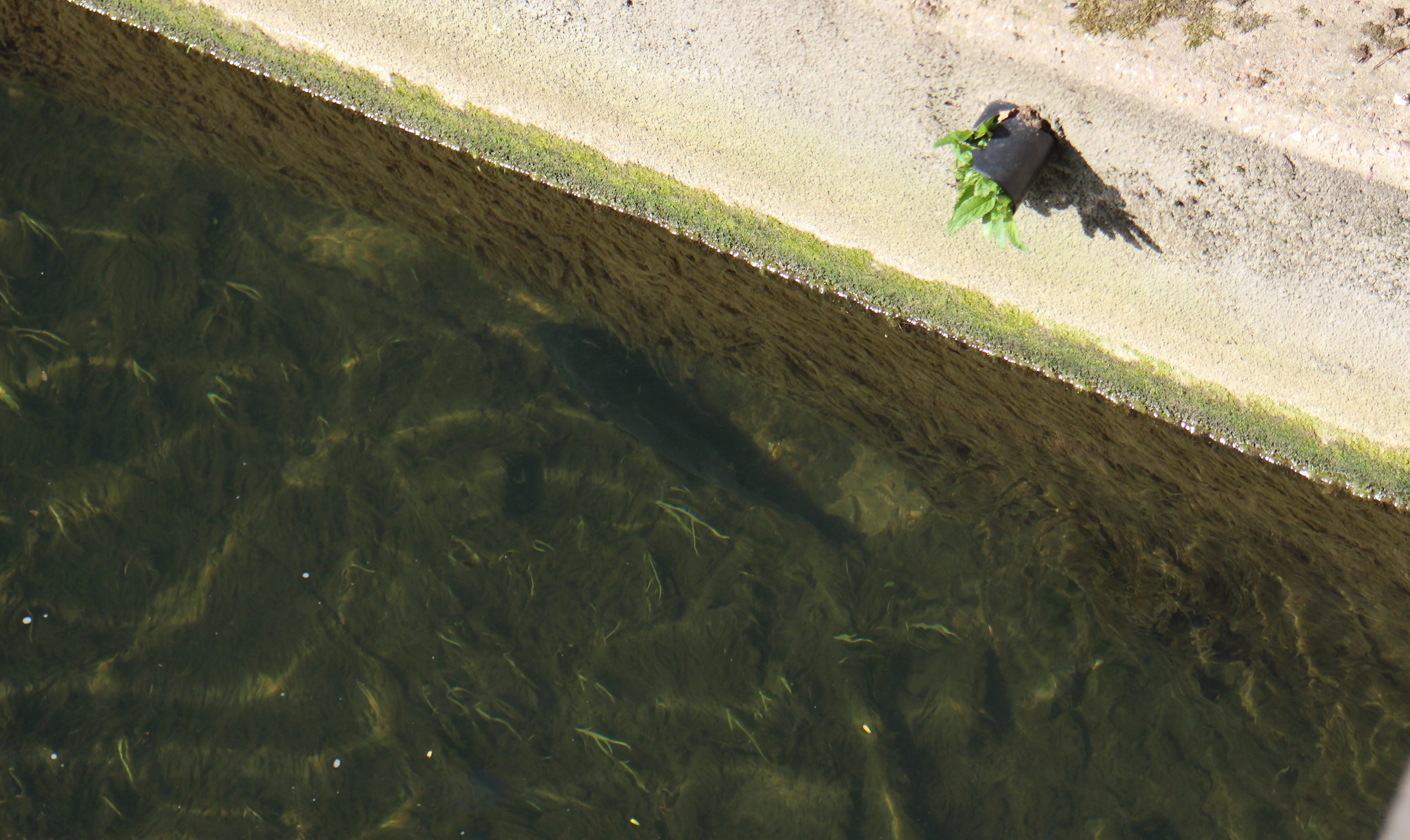 A waiting game needed to be played, I had time, it was early and the rest of the day lay ahead. Sitting on the grassy bank below the bread I took my time setting up. A Hends Canou leader was already attached to the reel which was convenient as a fly line landing on the water tends to put the fish down immediately. The river here is slow, the surface smooth, I needed a fly that ticked all the suggestive boxes and didn't sink like a stone. Andrew Ellis of Scruffy Dubbing fame had sent me some cream rabbit dubbing to go with the caddis green dubbing I already had. I use these two specific colours for JP pupa, cream being my all time favourite. A size 12 cream bodied with a 2,8mm copper coloured brass bead providing a minimal amount of weight.

I saw a couple of fish milling about in front of me, knowing that my target was well upstream I supposed it wouldn't hurt to open my account trying to catch one of these. It took a few casts - mostly because I had to get used to the french leader again - but eventually I saw a trout take my fly as it drifted down in the current. A feisty fight from a trout that turned out to be bigger than first appeared started things nicely. A quick Glen Pointon style head shot and the fish shot off downstream. 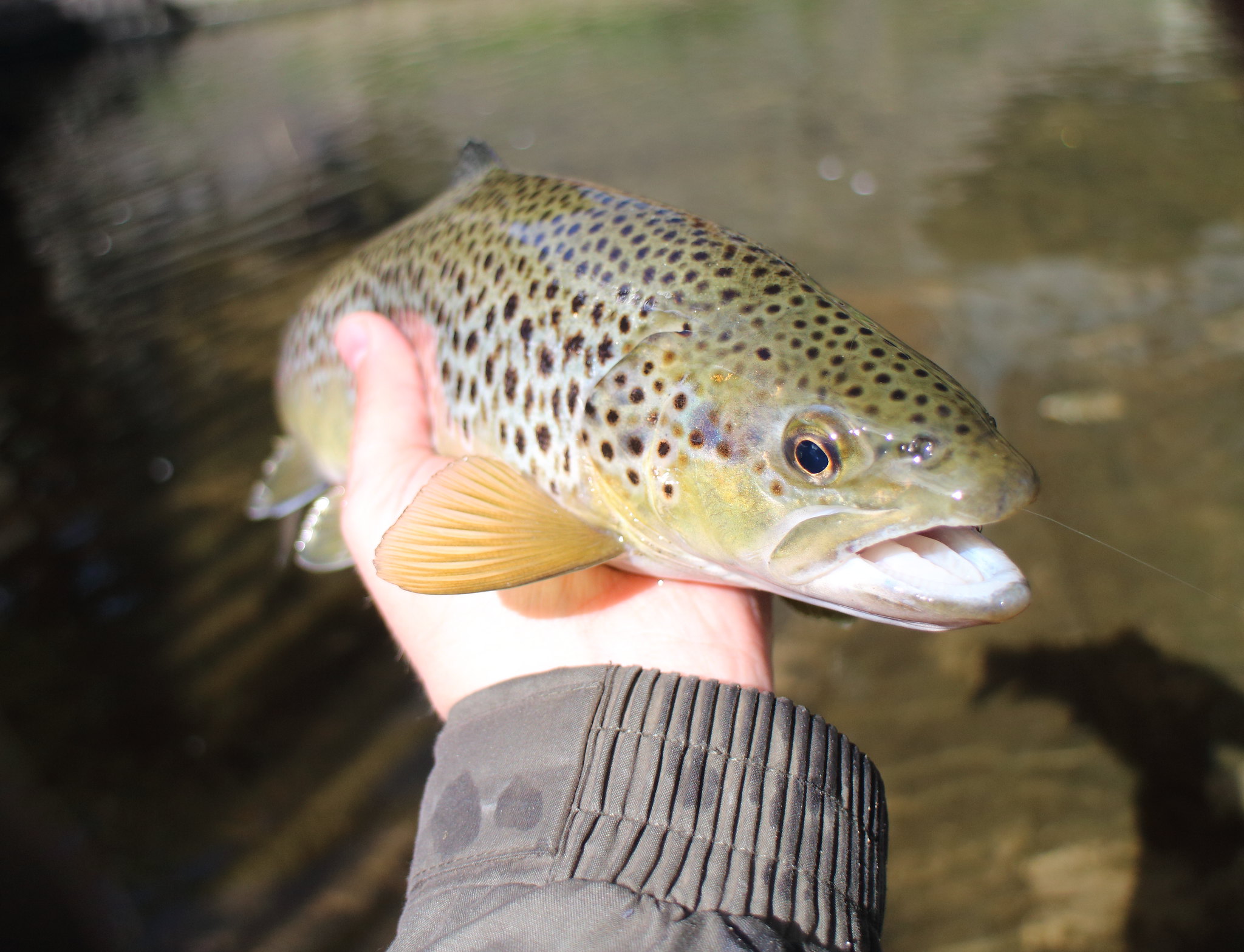 I entered the water and slowly stalked my way under the bridge. Reaching the other end I could see the dark shape of the large trout in the same position I had found it in. As I was pulling line off and preparing to cast and unseen fish darted upstream from below me. It headed straight to where the larger trout lay, both fish the swam downstream back under the bridge, my head fell as I was left despondent; I had blown it before I had even had the chance.

Still hopeful I crept back downstream and to my surprise the large fish had taken up station two thirds across the river, barely fifteen feet away the fish seemed either unaware or unconcerned by my presence. I stood just down from parallel with it and threw a couple of ambitious casts towards the fish. One cast that landed just to the side saw the fish drift across to intercept the fly, last minute the fly dragged across the river putting it off but it moved to the fly - my confidence soared. Another couple of casts and the fly landed inch perfect, as the fly traveled down the flow, a blink of white brought an immediate reaction as I lifted in to the fish.

The fight was long and almost one-sided, there were no bonefish like runs, just pure dogged power. My Daiwa Lexa was bent doubled as every lunge and head shake was absorbed; the three weight was a bit under-gunned but coped nevertheless. I had a chap with his young daughter watching from above, as the fight wore on he agreed to take some pictures if I landed the trout.

After what seemed like an age I squeezed the trout into my pitiful scoop net - I really must get a bigger net. It was colossal, certainly bigger than anything I'd caught before. I handed my camera over  and explained how it worked as the fish rested in the net. The photos were quickly taken and I set up to weigh, I tend to take my scales with me when I fish this stretch. Some reference pictures were taken against the rod so I could work out its length. After another rest I weighed the trout; the scales said 6lb 1oz, my biggest wild brown trout to date. 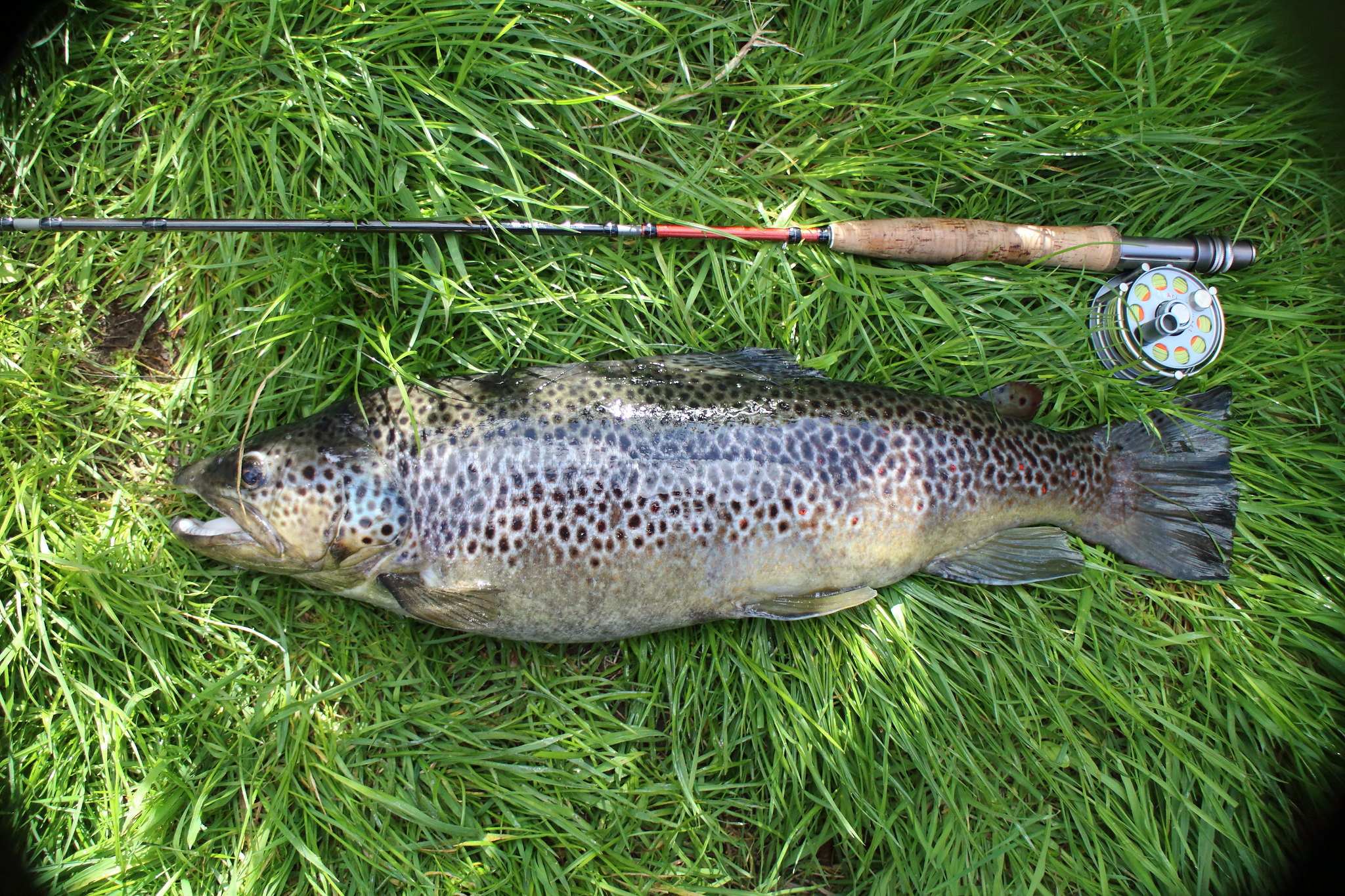 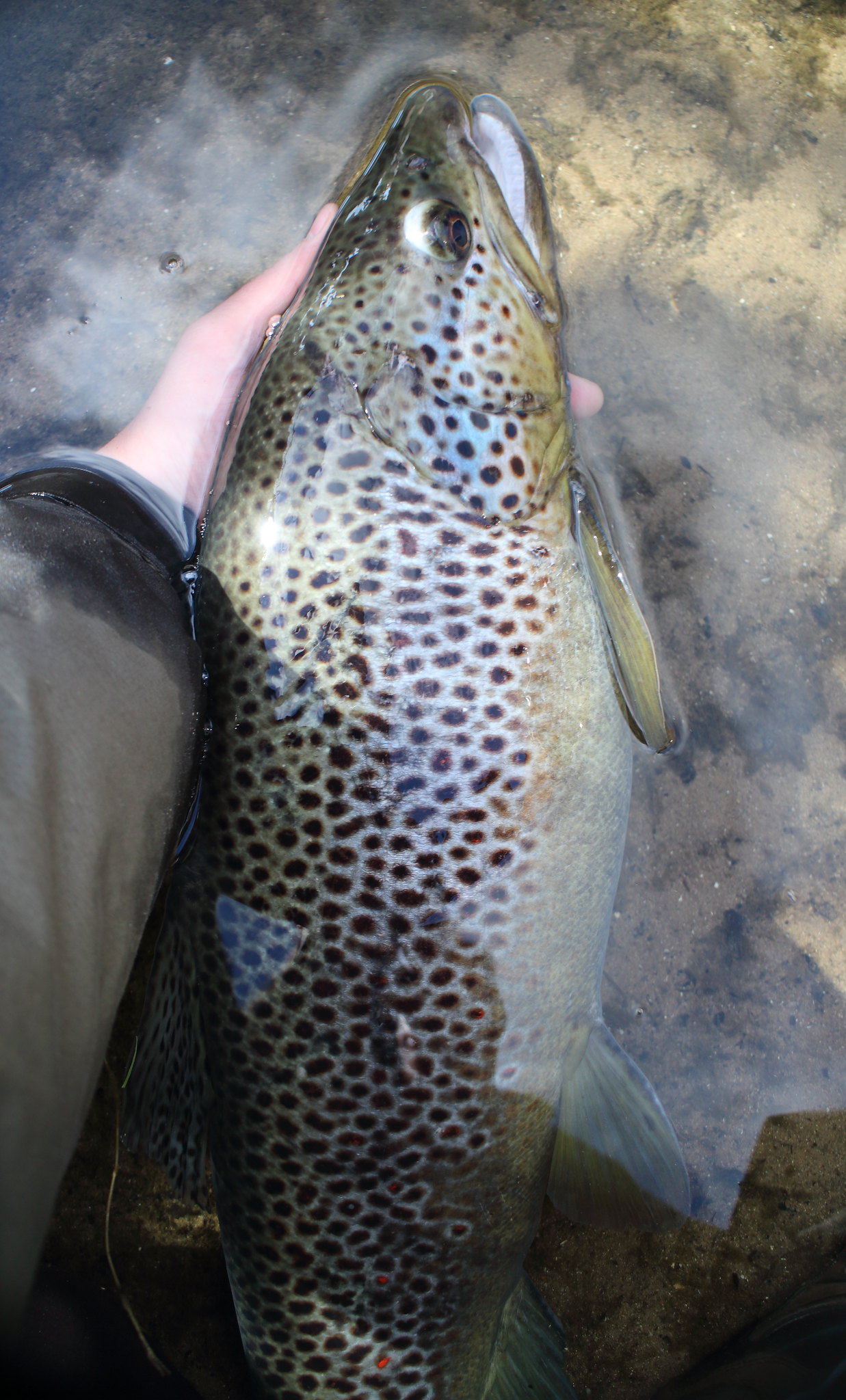 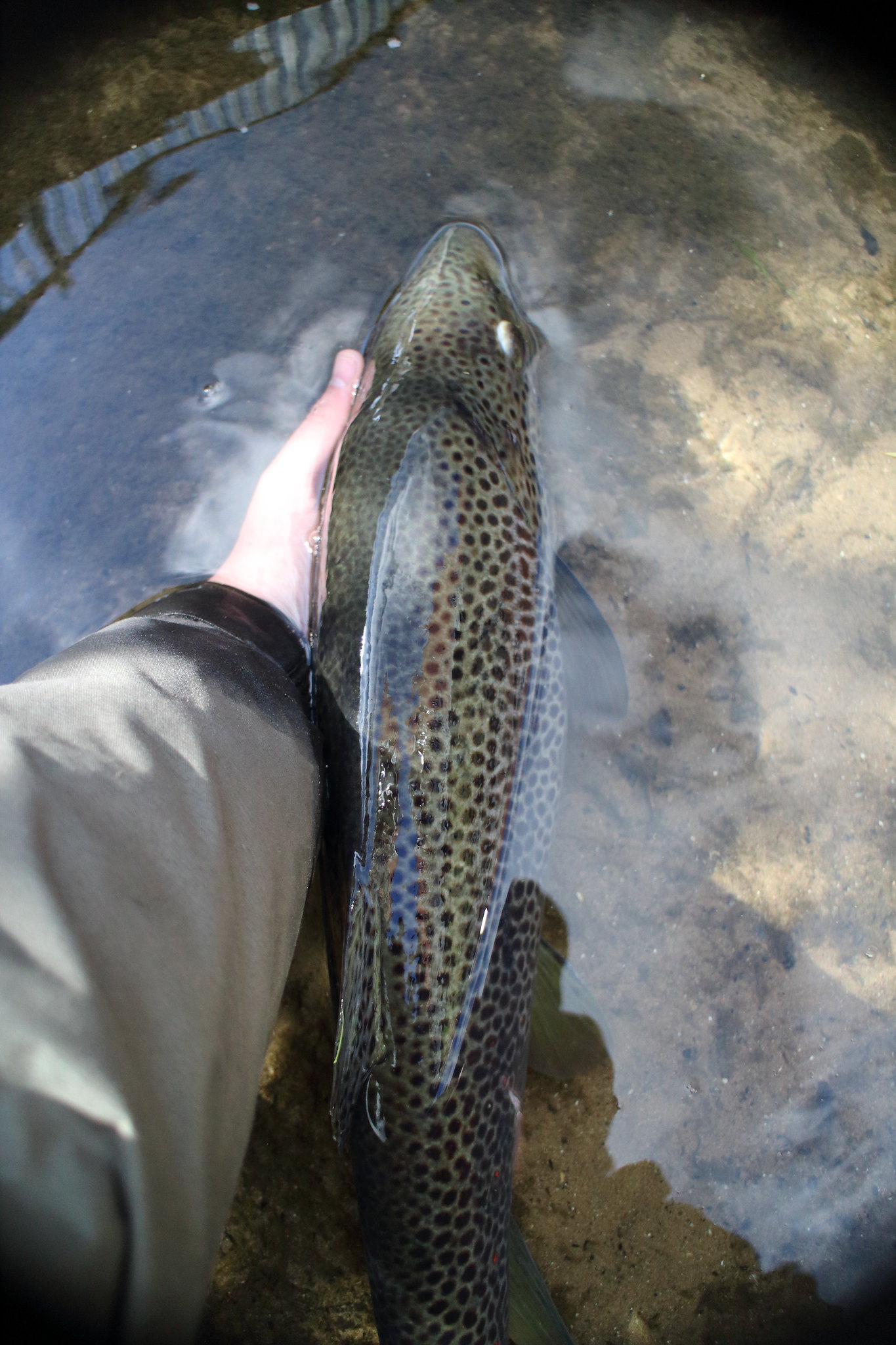 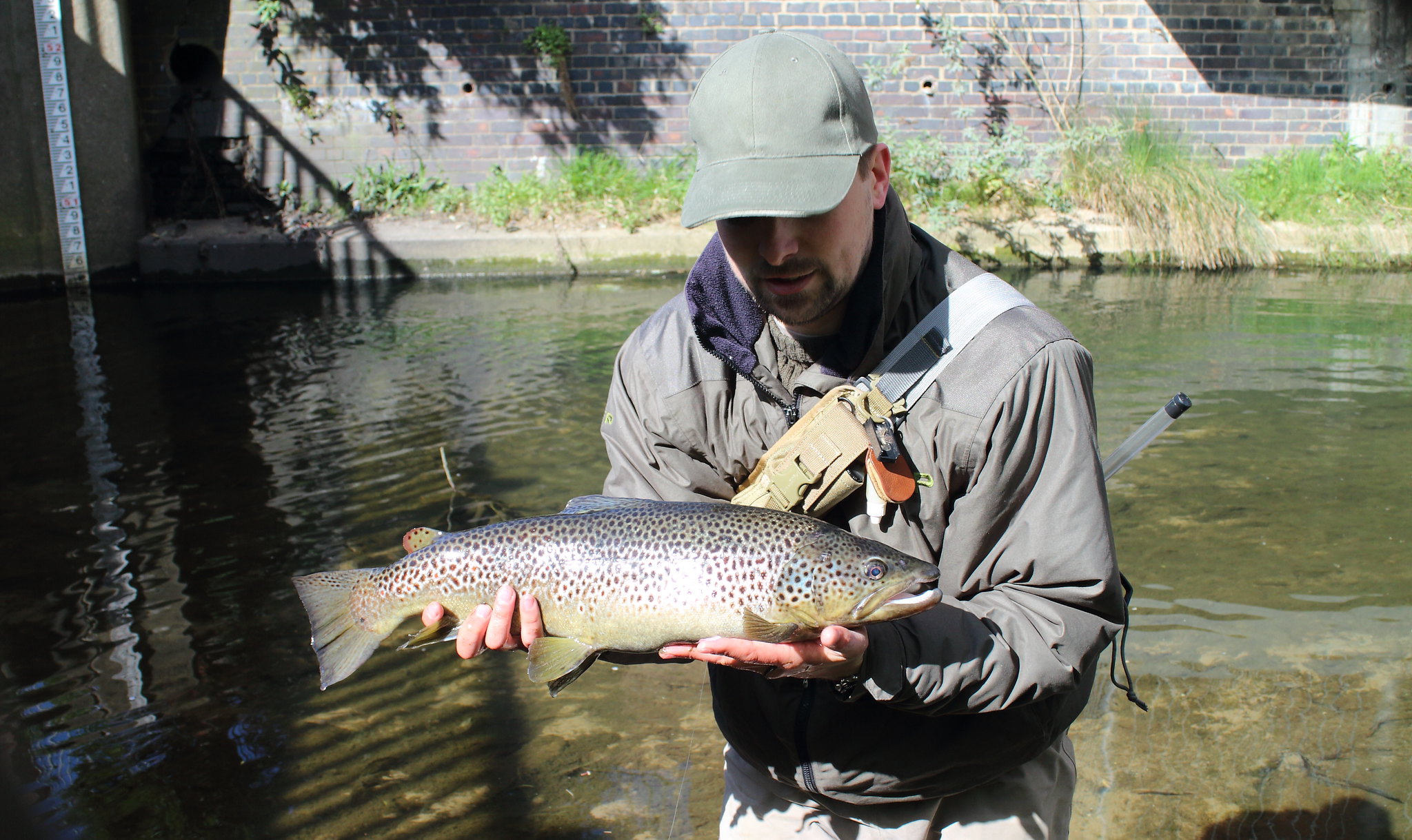 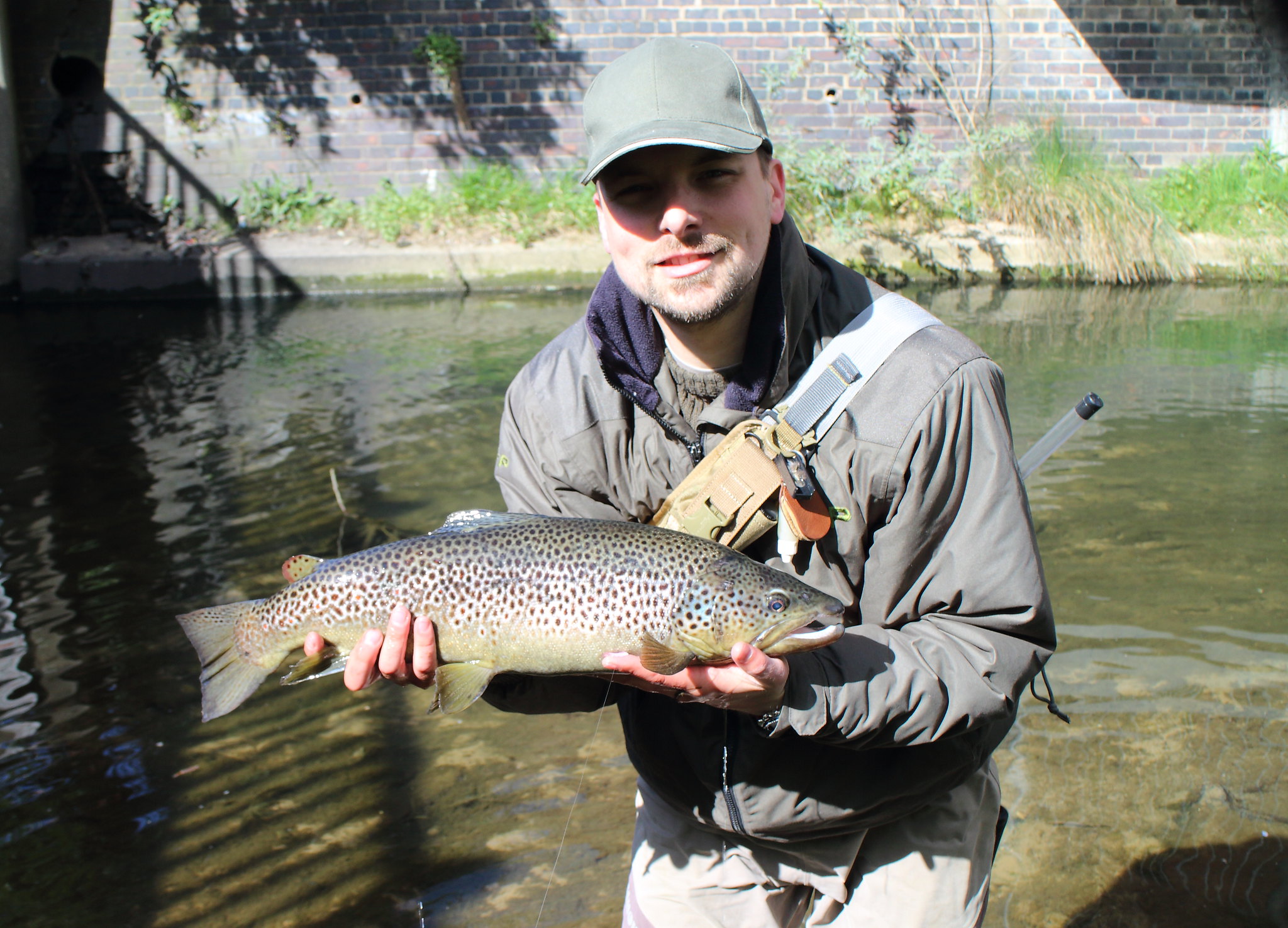 My day was made already and it was only half ten, I had more than exceeded expectations, Not really knowing what to do with myself; I could have happily gone home satisfied. Of course I didn't, there was no way I'd waste the full days fishing, I set off to fish a club beat.......

As it turns out this fish and I have already met, after checking some pictures I caught this fish last year on the 6th August, it weighed 5lb 6oz, proof that good handling, and of course releasing, works.