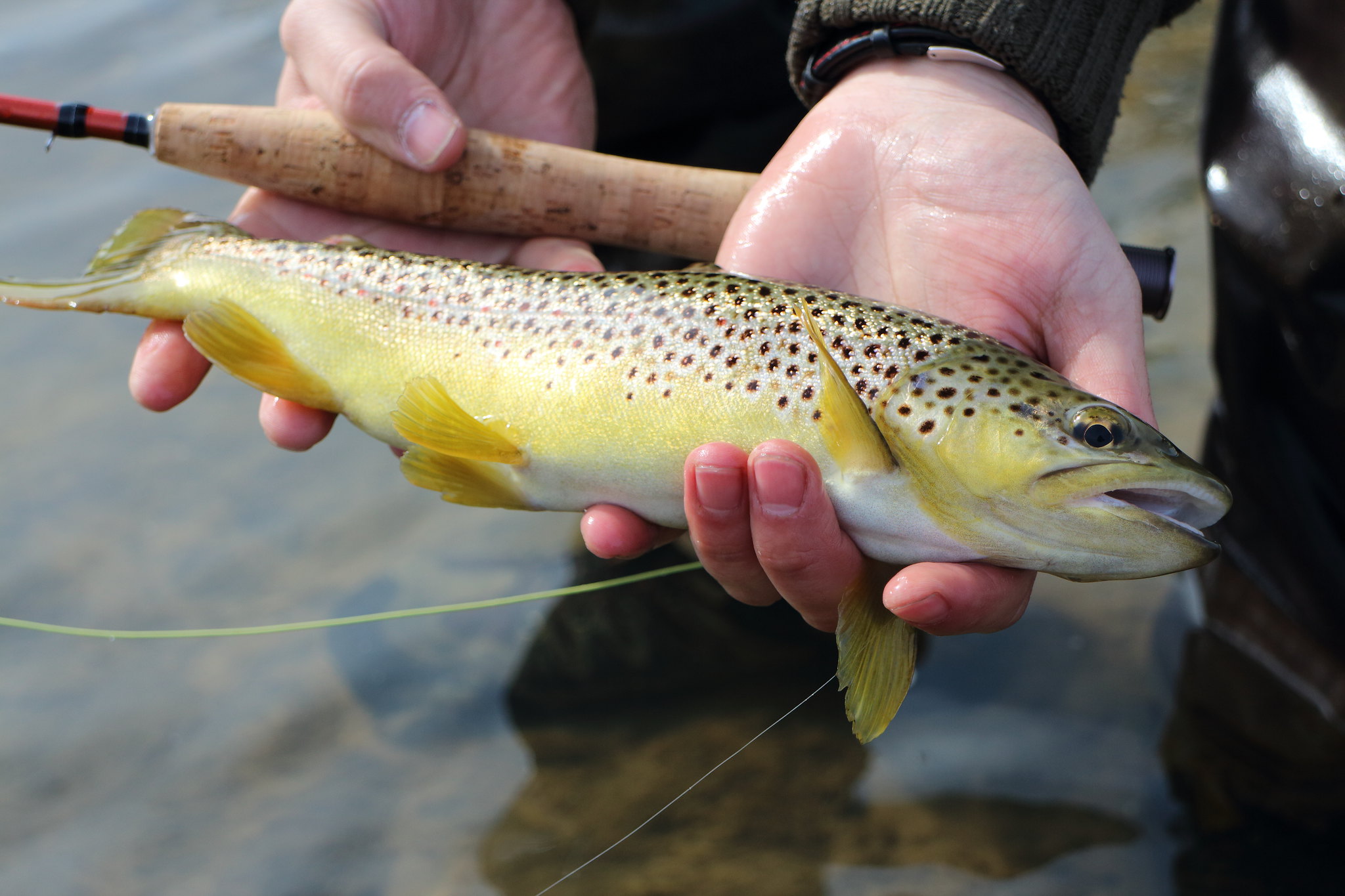 The season has started. A lunchtime finish saw me head to my club water when I left work. I opted for a beat closer, but we're only talking a matter of a few miles really. This beat is the upper reaches but still a few miles down from the upper limits of the river.

On arrival, I was greeted to a clear river, flowing strongly. Rain over the last two days had risen the water levels a little and I was grateful the river was fish-able. I met up with a fellow club member Steve and spent a few hours fishing in pleasant conditions; in fact I only wore a t-shirt and jumper - no coat needed.

We set up at the top of the beat where the cars are parked and walked to the very bottom, through the farm whose land we fish on. I fished this beat last year but never walked to the end, no idea why, I don't think I can blame it on laziness as it's not much further from where I used to start.

We patiently watched for a while to see if anything was moving. We saw no rises or any flies hatching; with more enthusiasm and anticipation than expectation, we both tied on single dries; I chose a Cul-de-Canon whilst Steve selected a beast of a CDC winged olive, I understood the logic of offering a meaty mouthful. 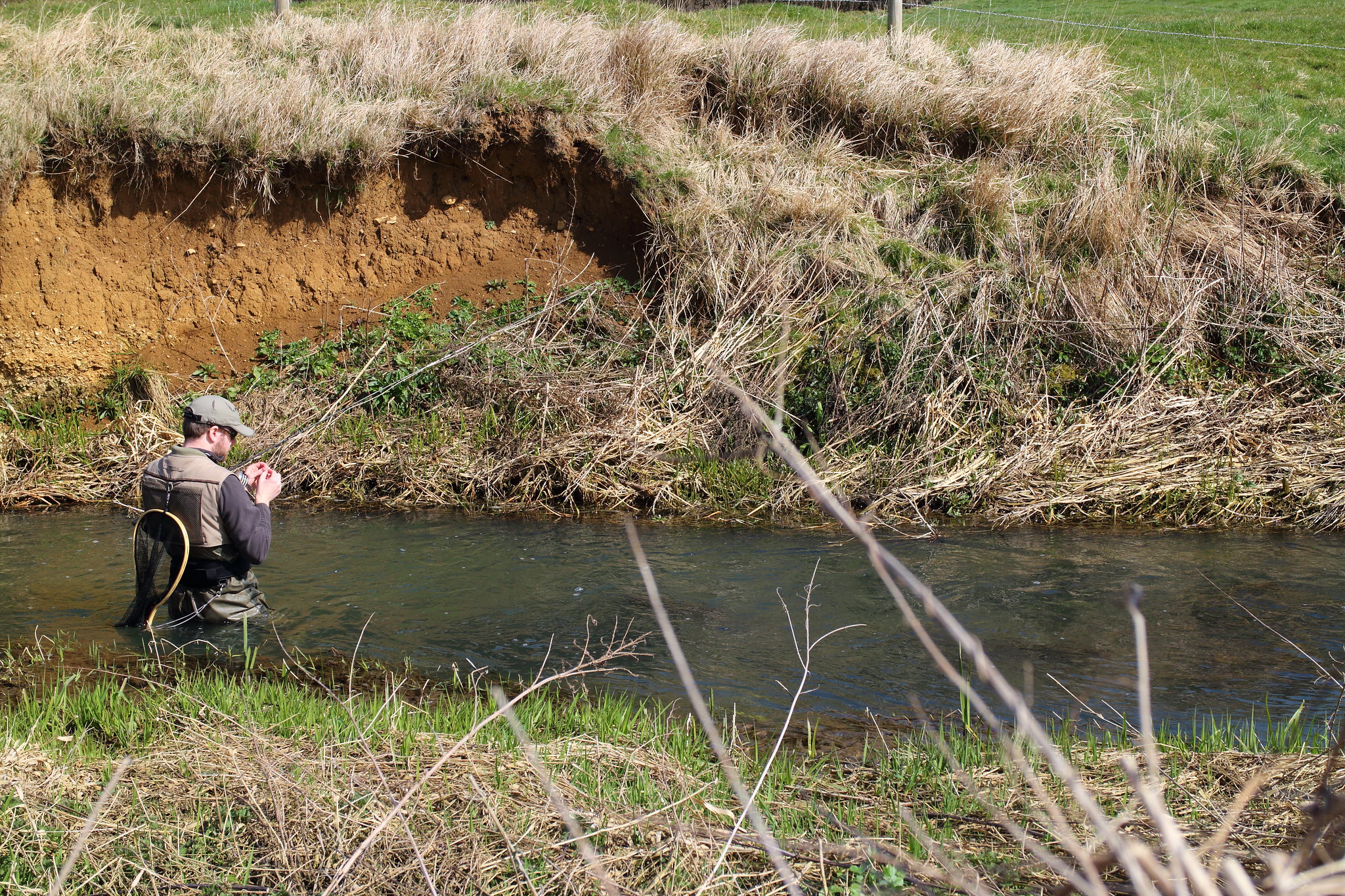 I fished the first pool with no luck and Steve fished the second having the same result. The next pool looked equally as unpromising, but just round the bend we found a fish rising. I saw a lot of midge shucks floating down the current and this combined with the gentle rises led me to believe the fish was taking emerging midges. Did I have a pattern to imitate that, of course not, I decided a Matt's Gnat should be suitable because if left untreated, the snowshoe rabbit fibres should keep the fly low in the surface film. Despite my best stalking skills, my haphazard casting eventually put the fish down - I'll use the excuse that it was my first time out with a new rod and line. 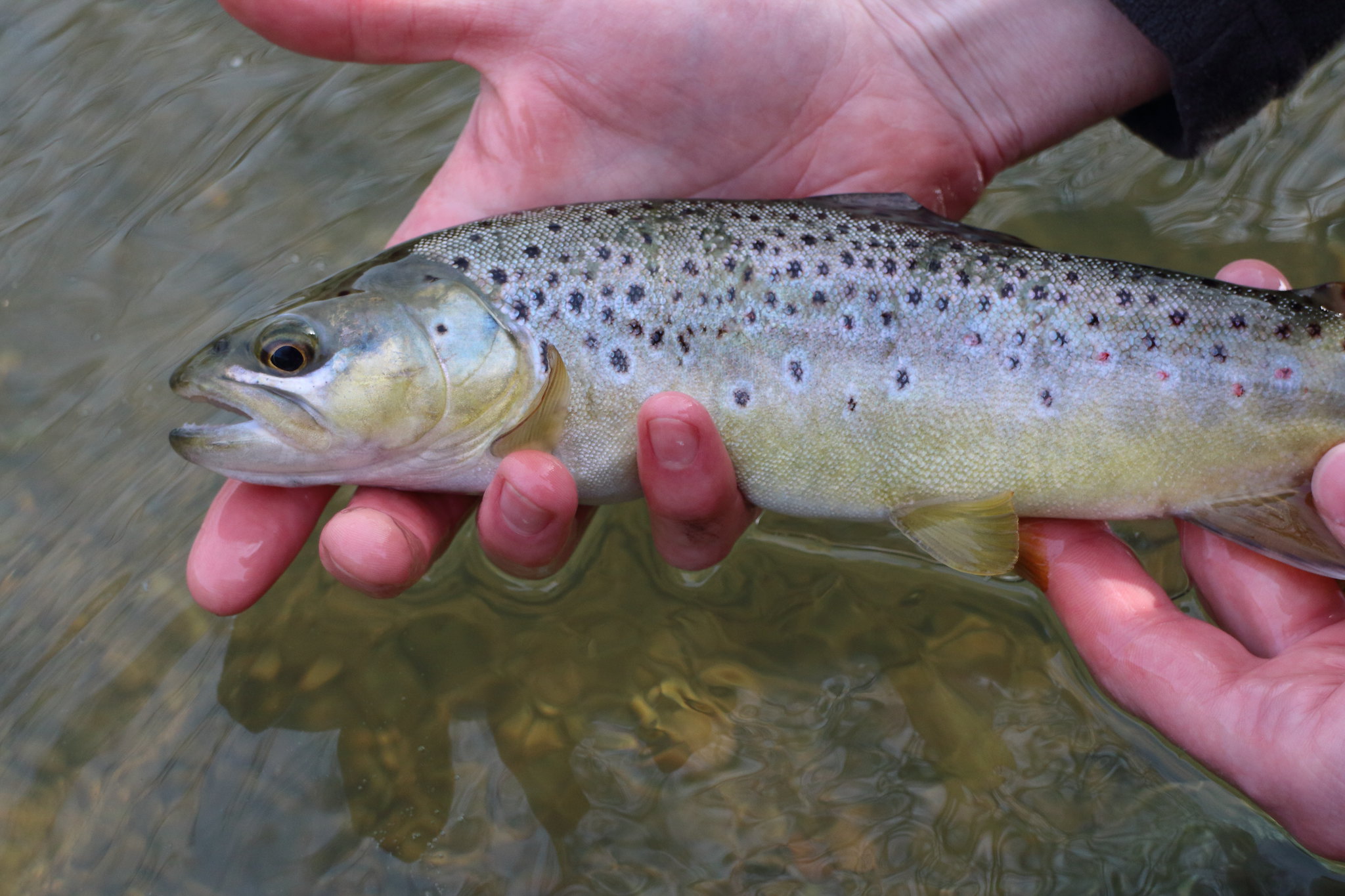 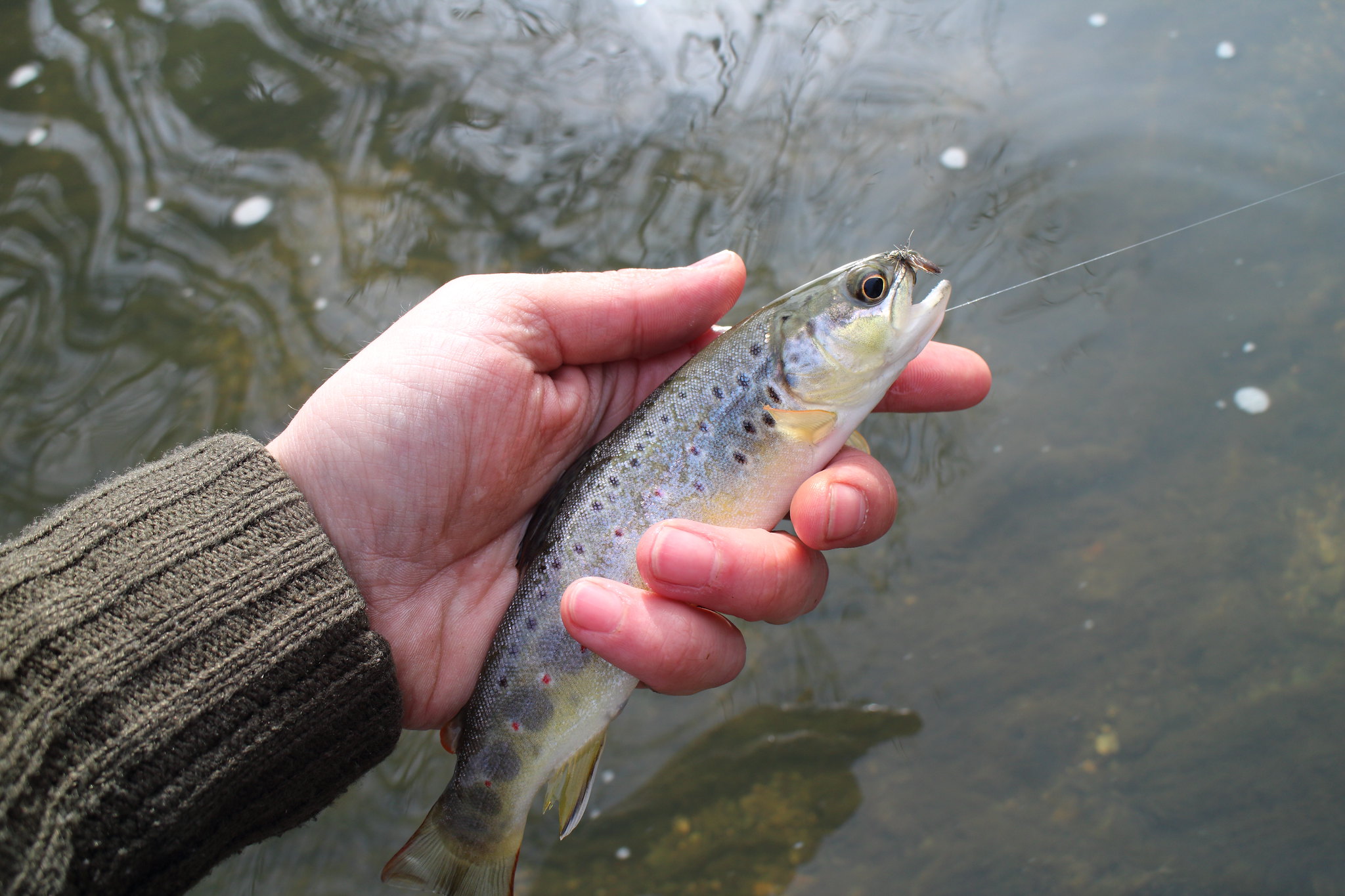 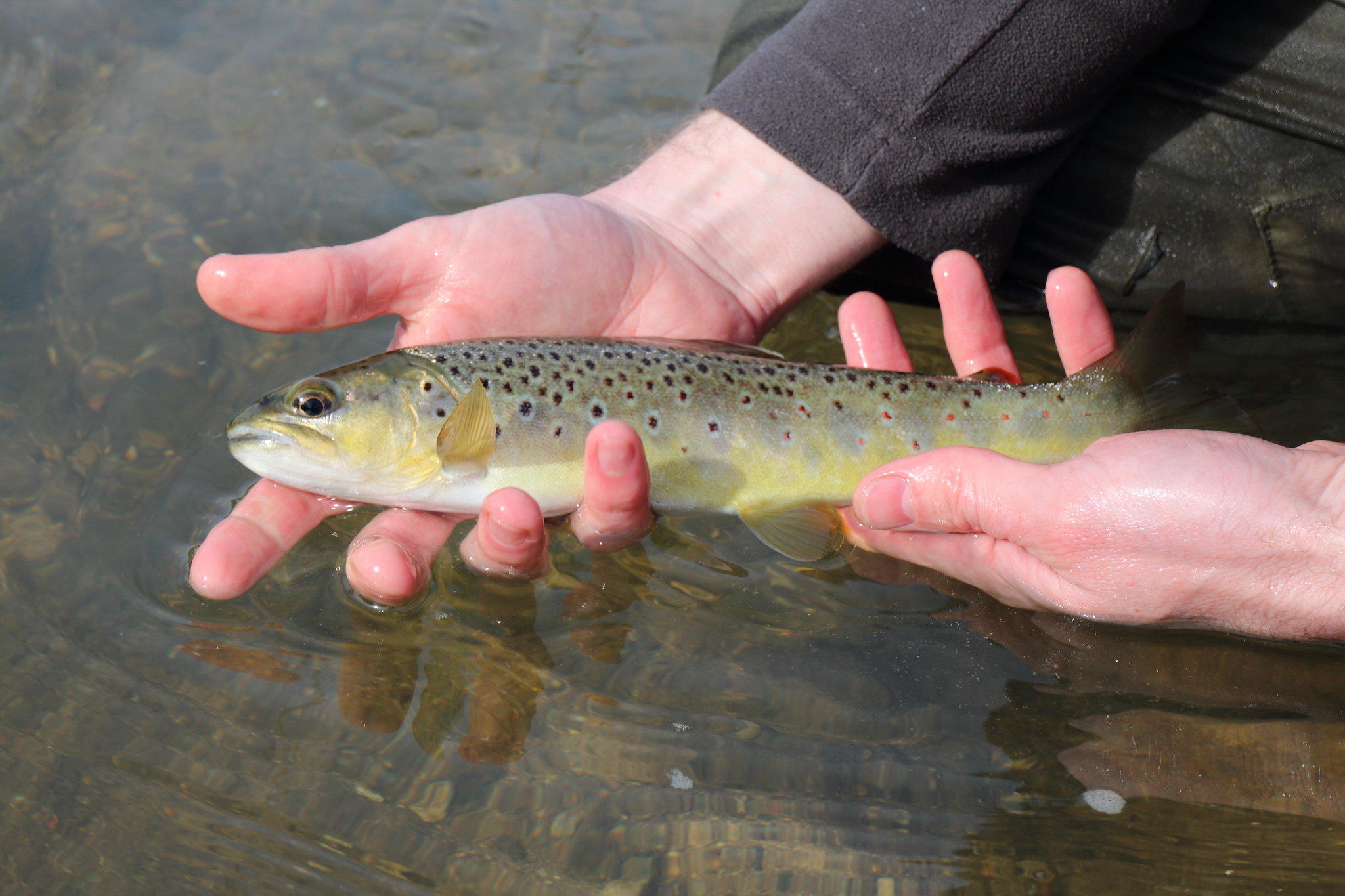 Steve fished the next section upstream and our lack of success continued, even the two trout we found rising couldn't be tempted. I decided to wonder further up seeing what I could spot. I disturbed a large trout lying close to the bank under a blackthorn thicket; I would say the fish looked a good pound and a half.

After we both walked the bank for a bit we came across a cattle crossing. This area is wide, shallow with a very smooth surface. A number of rising fish could be seen including what we believed to be a very large trout upstream at the next bend - we saw this fish rise a few times and were in no doubt of its size. We assumed the fish were rising to midges still, I had tied the Cul-de-Canon back on and Steve fished with a small light tan Klinkhamer, mostly in the hope that they weren't being fussy. Both Steve and I caught a fish from here, mine a plump 12" and Steve's a modest 8. I pricked another fish and made my way round the bend. 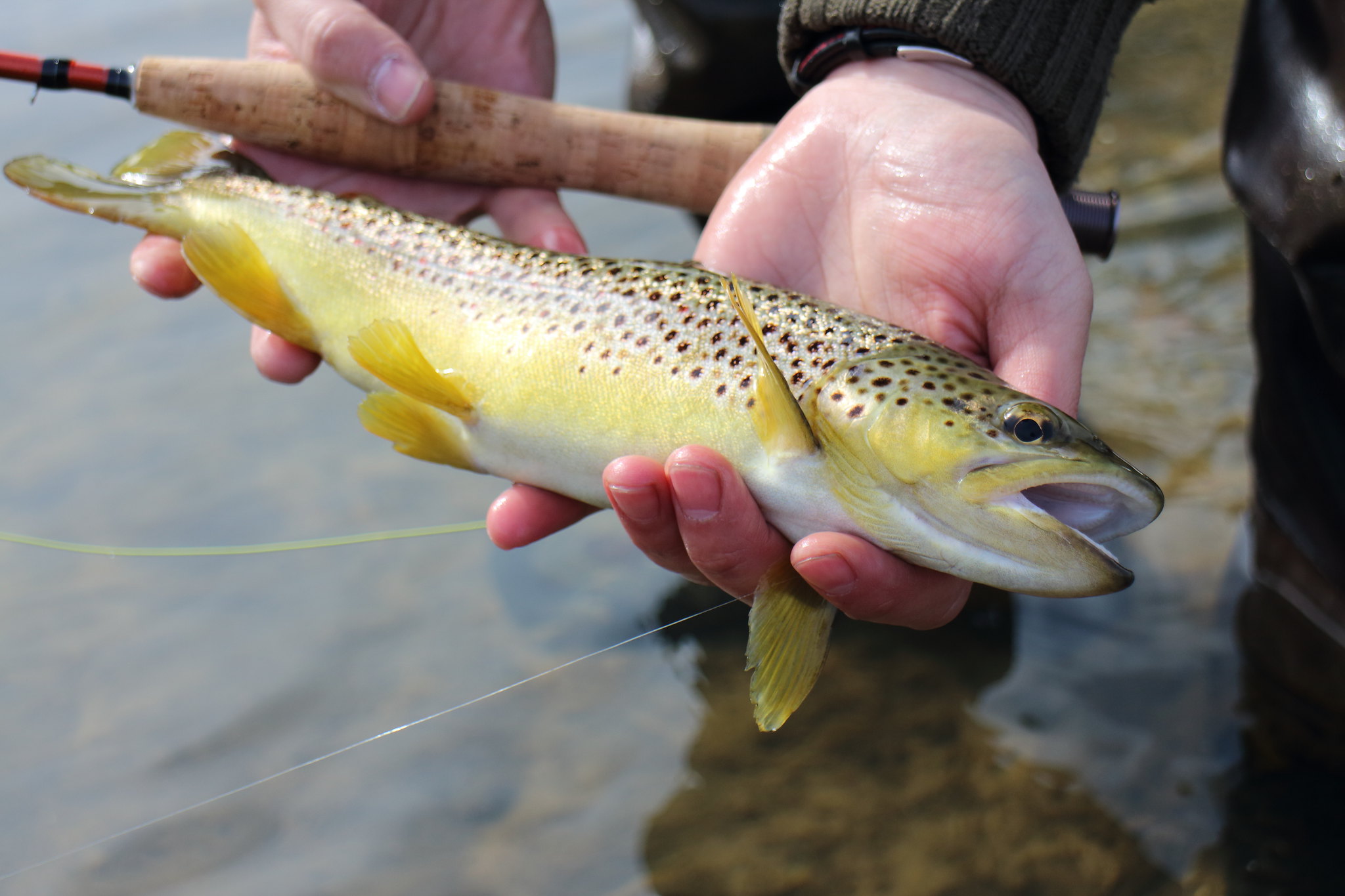 More fish were found rising as we worked round the bend. The large fish wasn't seen but its position was noted for next time.I landed another two trout and lost one while Steve caught another. By then the rises had stopped and I had ran out of time. We walked back along the river discussing various parts and contemplating how we would tackle each part. I thoroughly enjoyed the afternoon, and was very happy to have caught some fish. 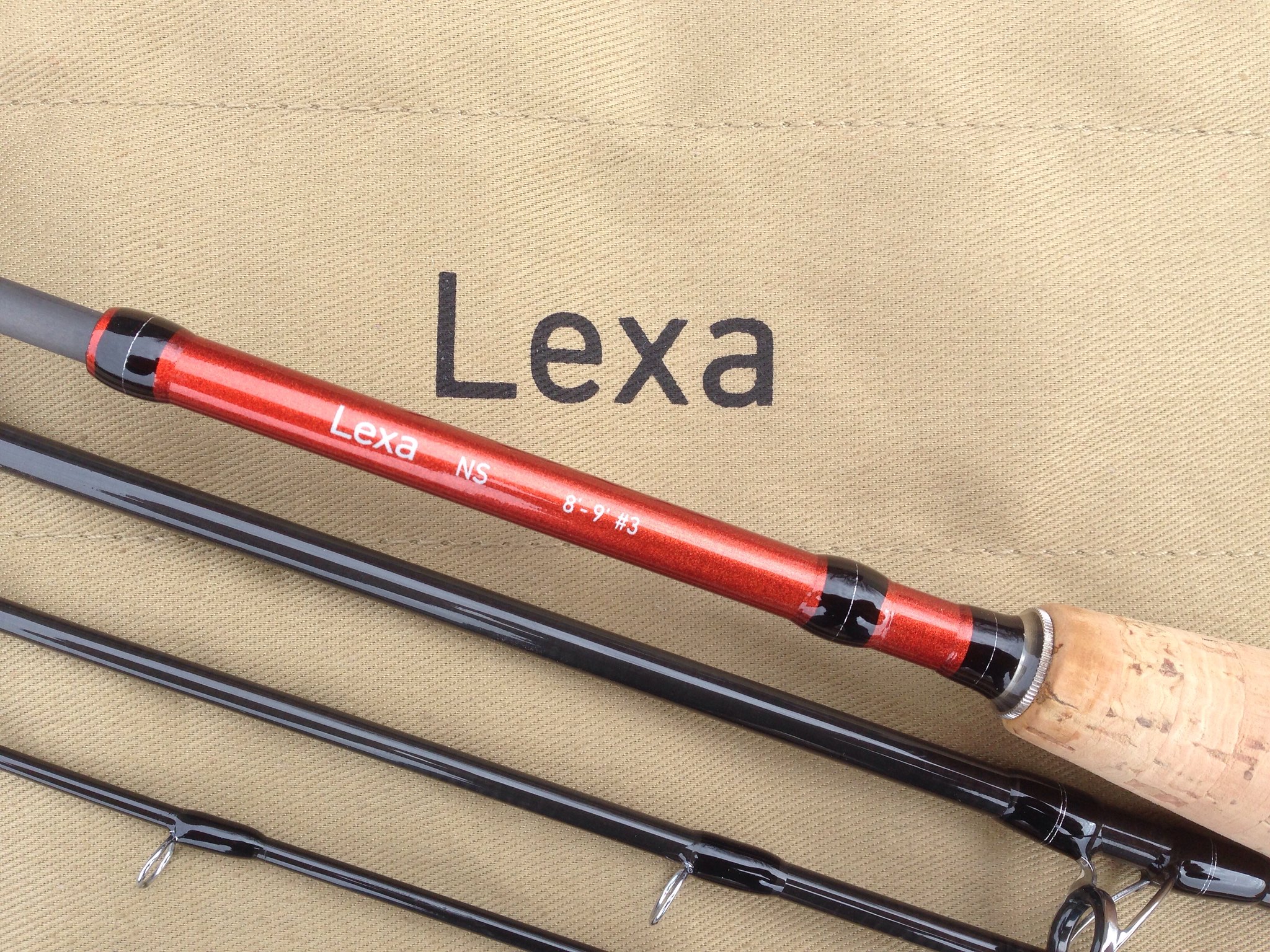 Those of you that follow the inpursuitofspotties Facebook page will know that I bought a new rod for this season. Having um'd and ahh'd for several months I finally plucked the courage to buy a Daiwa Lexa nymph special. I bought the 8-9' 3# version as I mostly fish with an eight foot rod. I liked the versatility offered by the removable one foot section. As stated in the FF&FT review of the 9-10' version, this rod certainly appears to have been designed differently, in that this is a rod you can make shorter without affecting it, rather than adding sections to make it longer and ultimately ruining the action. I purchased a Barrio GT90 3# to match with the rod and I found it effortless to cast, the tip recovery is quick, the line turned over smoothly and loops were as tight or open as I wanted. I did only fish this at 8' but having cast it at both lengths the action is the same. I am so seriously impressed with this rod I will most certainly buy the longer version and move on my Orvis Western3to help fund it. This is the first Barrio line I have bought and needless to say it won't be the last, a superb casting line.
Posted by Ben Lupton at 22:02