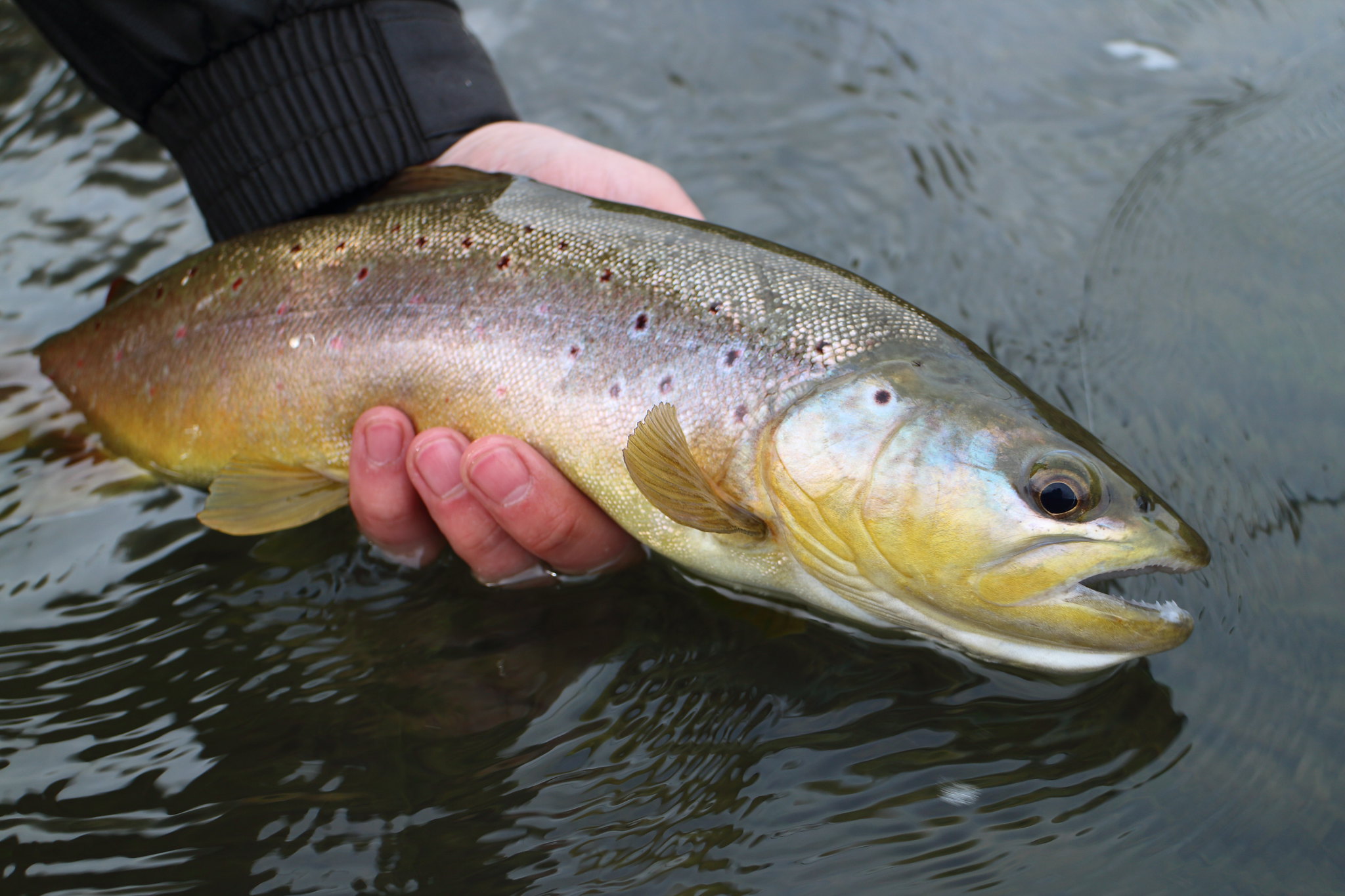 Much later than we anticipated, we made our way to the cars and without changing drove straight down to bottom beat. A brief walk saw us arrive at the extreme end of the club waters. I had never seen this part of the fishery and only visited this area during the winter, completing necessary maintenance work as part of the clubs months work parties.

We sat just sightly back from the waters edge as we set our rods up. Steve had decided to try and christen his completely handmade cane rod although he set himself a tall challenge in insisting it was on a dry-fly. Again Steve was a gentleman and gave me first shot. The pool I fished was on a bend and starting well down the pool working up the run fishing a duo again but with a Dhe instead of the obligatory klink.

Reaching the head of the pool I saw a fish rise in the main current against the far bank. I tried several times without success and quickly decided a change was needed. Sat on the bank and scanning my fly box for a likely choice I spotted a fish porpoise downstream of my position. I had only minutes before walked past, I was surprised plus it gave me a chance to rest the fish at the head of the pool and a challenge as I had to drift the fly downstream; something I don't do often and in all honesty I wasn't confident in doing.

The fish rose again as I tied on a size 14 Cul-de-Canon. It took a couple of casts before the fly drifted perfectly in line and I watched the trout rise slowly to the surface and fully expecting a refusal, but to my surprise the trout took the fly confidently and a firm lift attached the trout to my line.

Slow reactions on my part allowed it to shoot downstream further and into the over-hanging vegetation, still attached I gain a little put ultimately pulled too hard and broke off at the knot with the fly. I actually felt devastated, it wasn't a big fish, a pounder at least, but this fish really left me feeling at loss because if its escape.

We fished on without success and genuinely feared we might blank; of course we hadn't blanked but the fish we caught earlier couldn't be entered on our club catch returns.

It was Steve's turn to be left with a memory. Round the corner from a promising, although unrewarding run, was a set of two interconnected deep pools. Still anxious of blanking we felt sure a fish could be caught from this area. Some great drifts saw the LT klink drift untouched until one such drift caused the fly to drag quite fiercely, at this point a huge mouth surfaced causing an enormous splash and engulfed the fly. The violence of the rise took Steve by surprise, at the fish was snapped off on the strike. We remained in place, frozen with shock and disbelief at what we had just witnessed. With more than a little dubiety we waited and changed the fly, because the fish reacted so aggressively to the dragging klink I gave Steve one of my G&H sedges; to see if something with a little more meat to it as well as being able to withstand any skating if necessary.

We waited around ten minutes before Steve tried to arouse the fish again, unsurprisingly it didn't show again, That blank seemed ever closer.

It was my turn to fish the next pool. I was set up with a single nymph with an indicator, the pool was turbulent, a JP pupa with a 3mm tungsten bead was the only thing suitable. Within half a dozen casts a violent take as soon as the fly hit the water, the reel screamed as what was clearly a good fish tore off upstream. I shouted to Steve who was upstream and he joined me to do the photography honors. 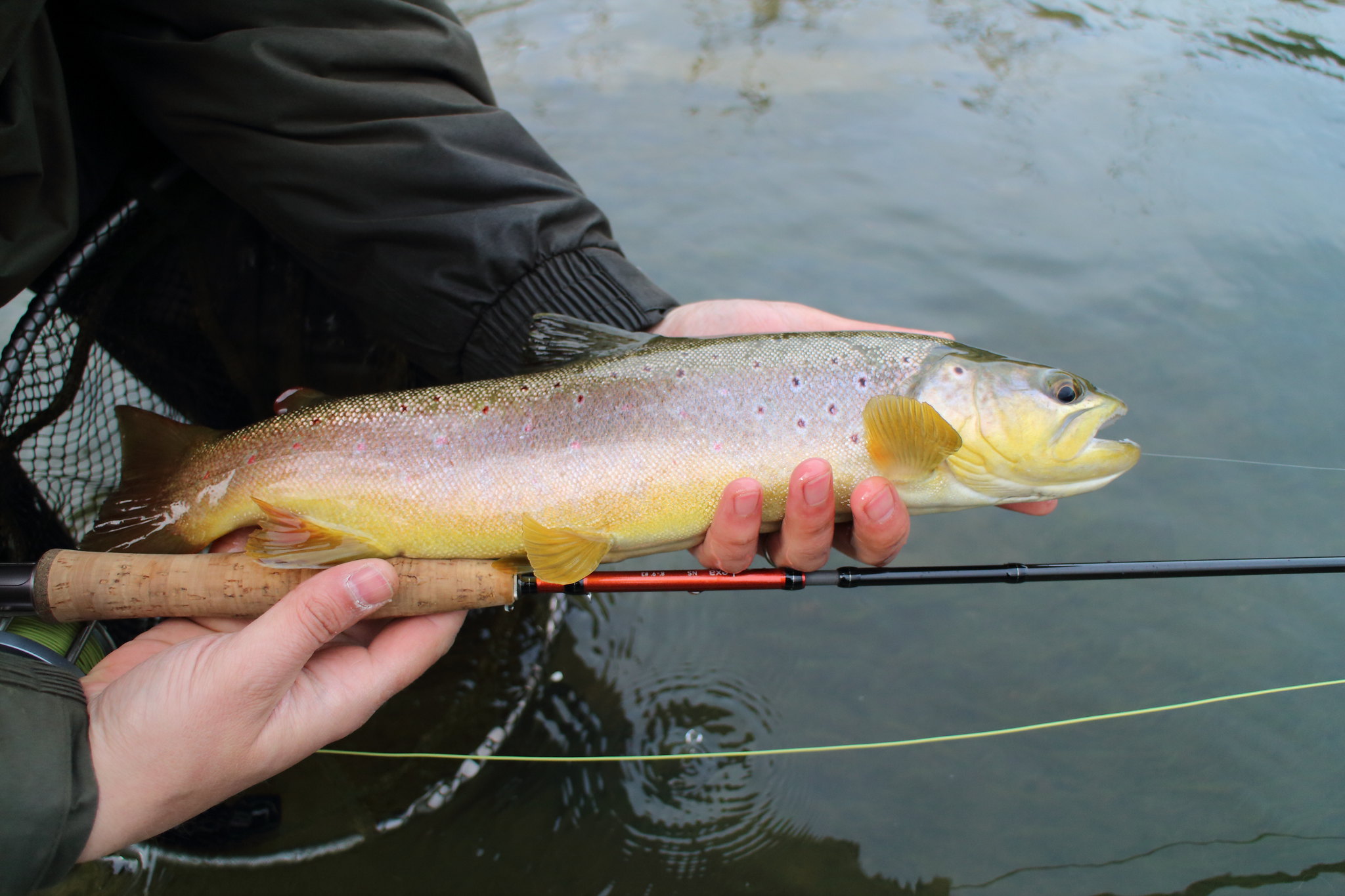 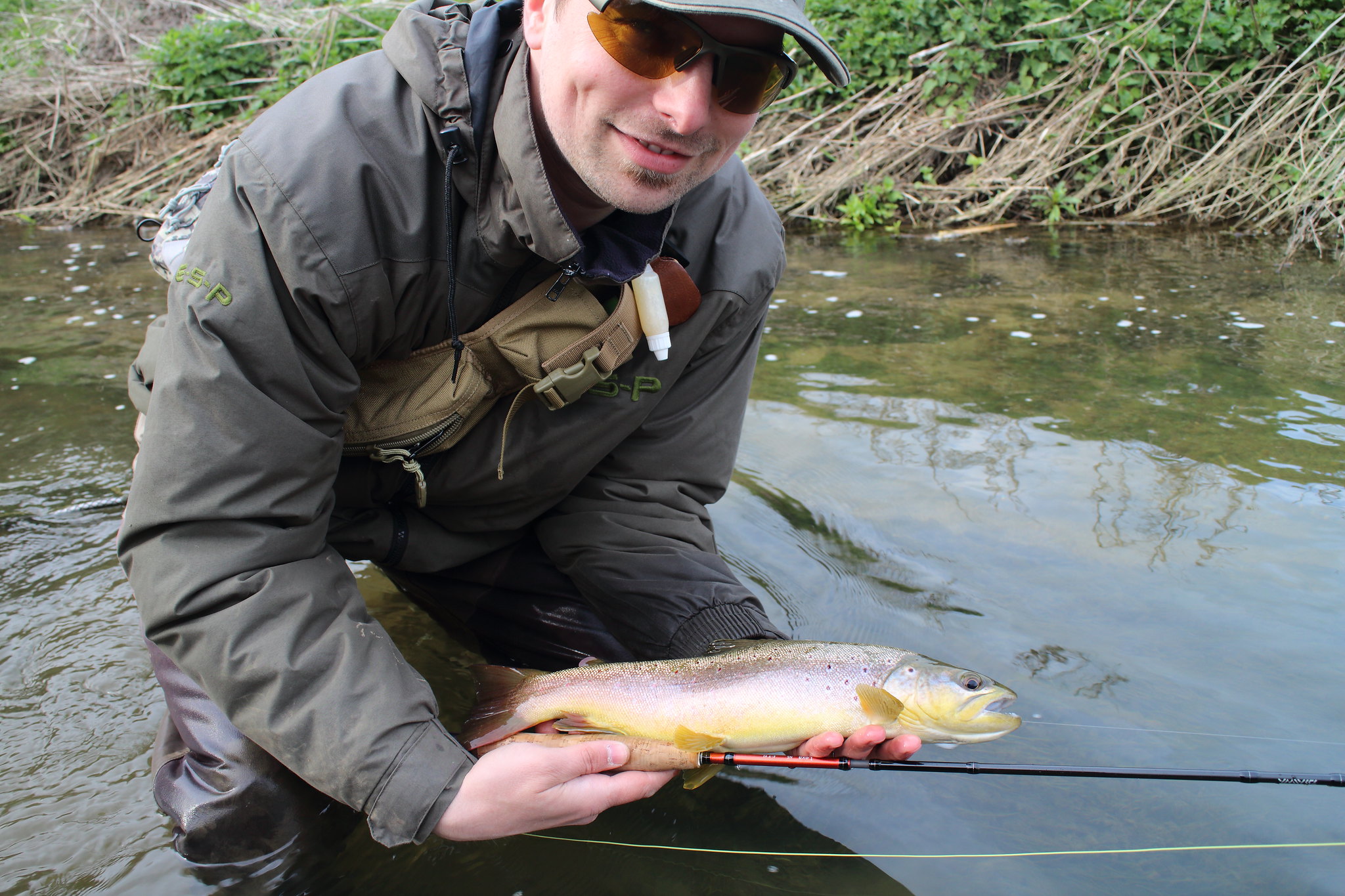 An oddly coloured trout with an orange hue the fish measured 16" although it was hollow bellied, we didn't weigh it but a still a great fish.

As my blank had been broken I gave Steve the rod to finish the run as there was plenty of water still to fish. Thankfully he quickly caught and we knew we could relax now we had fish to enter on our catch returns. A pretty little 7" trout was quickly released and now we could concentrate on christening Steve's bamboo.


Steve fished a number of pools without success and although we both knew he could easily catch on a nymph I admired Steve's spirit and resolve to insist the first had to be on a dry. It was getting late, much later than I expected to be out, walking along the bank we identified the likely looking areas for next time. I even managed to catch another small trout with an exploratory cast from a high bank into a fast run against the near bank, as I went to lift the fish out it gave itself a long release so saving me job of clambering down the bank to release it back into the river.

All in all a great day, but those two fish - my modest one and Steve's monster - will not be forgotten in a hurry.
Posted by Ben Lupton at 19:00