Sparse, but a hatch nevertheless.


Tom had his induction today, Easter at the beginning of the month knocked things out by a week. I arranged to meet with him so we could fish once he had his membership book.

It was frigid, a T-shirt, long-sleeved top, thick jumper and coat were the order of the day; thermal leggings and a neck snood finished the dressing. A cold and gusty wind blew from the north, thankfully this meant it was upstream so I could use the Lexa without difficulty. A brief fish with two nymphs fished upstream while Tom was inducted into club yealded zilch, not a great start. When Tom joined me we walked upstream from where I fished and we commented on the work that the EA had undertaken during the winter. I reminisced past glories and showed Tom where I had fished last year and how I fared. 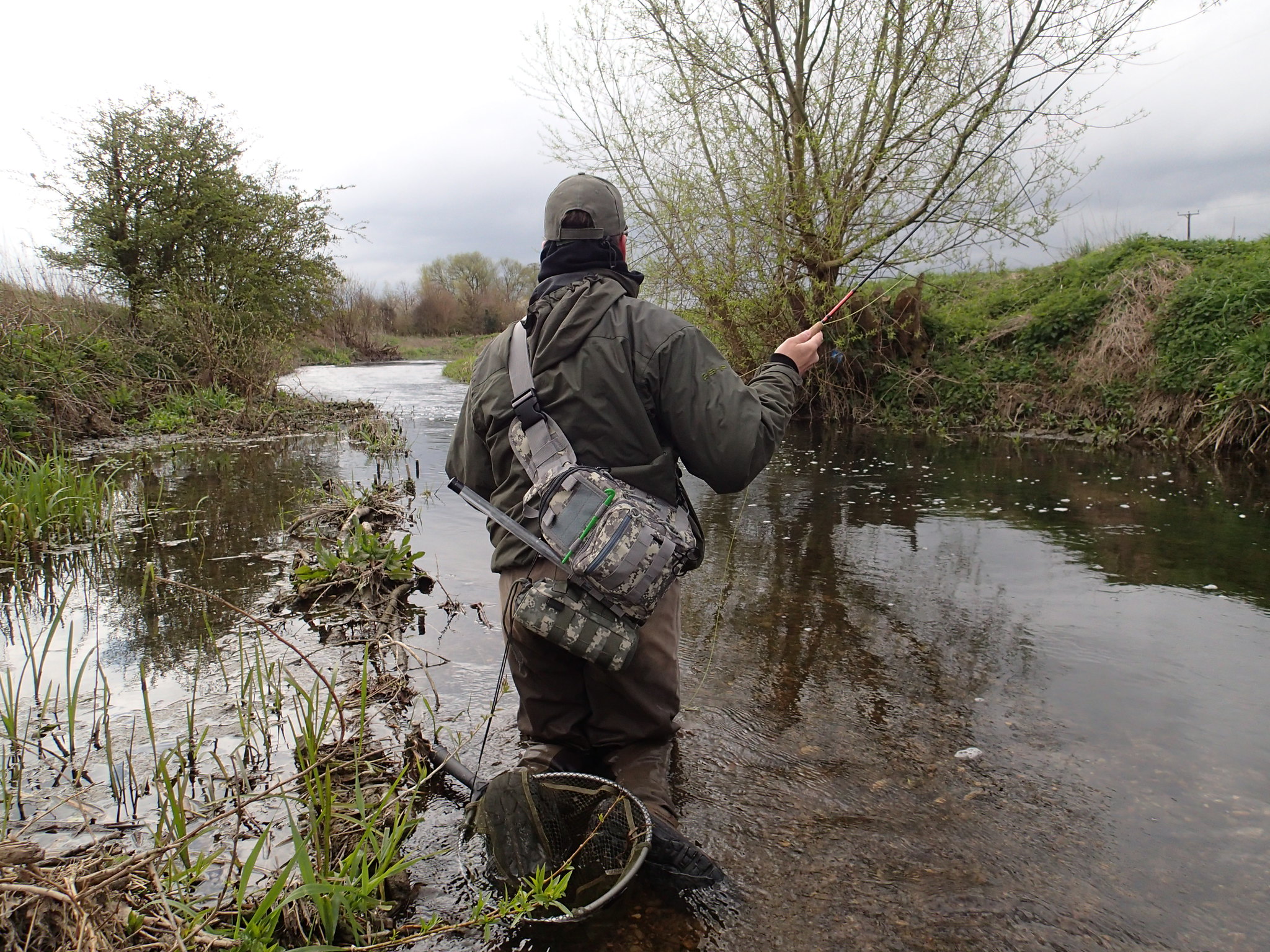 Arriving at a pool I wanted to start on I explained the vagaries of this part and pointed out the likely areas. Tom had already set up to fish a klink and dink and started to cover the pool, it wasn't long before he caught a fish, a tiny grayling that neither of us knew had taken the fly. That gusty wind was problematic, forcing the line and fly across the river, adjusting where the cast was made alleviated that issue but the odd cast was still blown off course. A fish rose and took the klink, much to the surprise of both of us, as it took moments after the fly had landed, brief tussle and a plump little brownie was in hand. My turn saw me hook, play and then lose a trout, typical of course. We fished on further up into the next pool without reward. 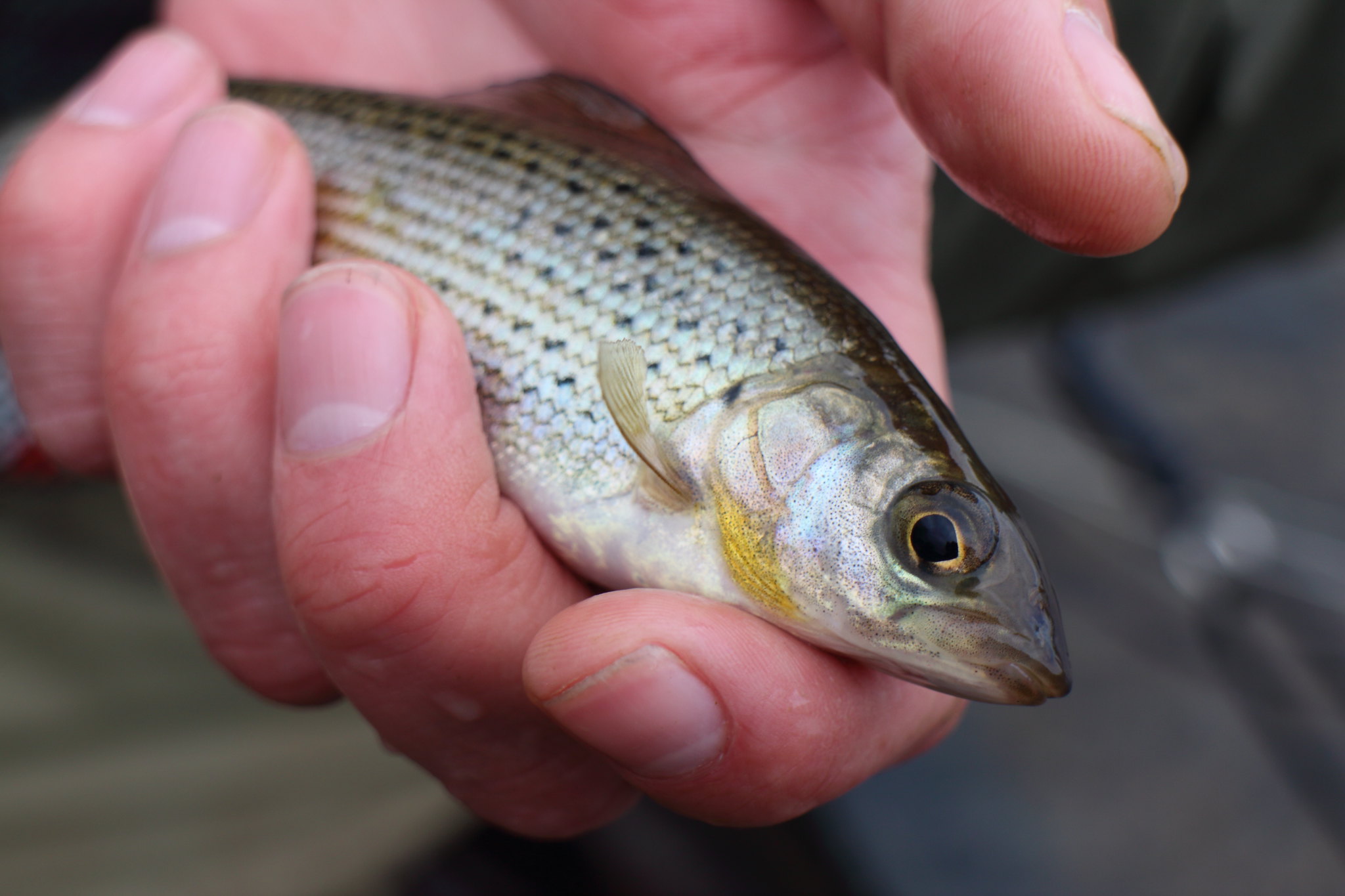 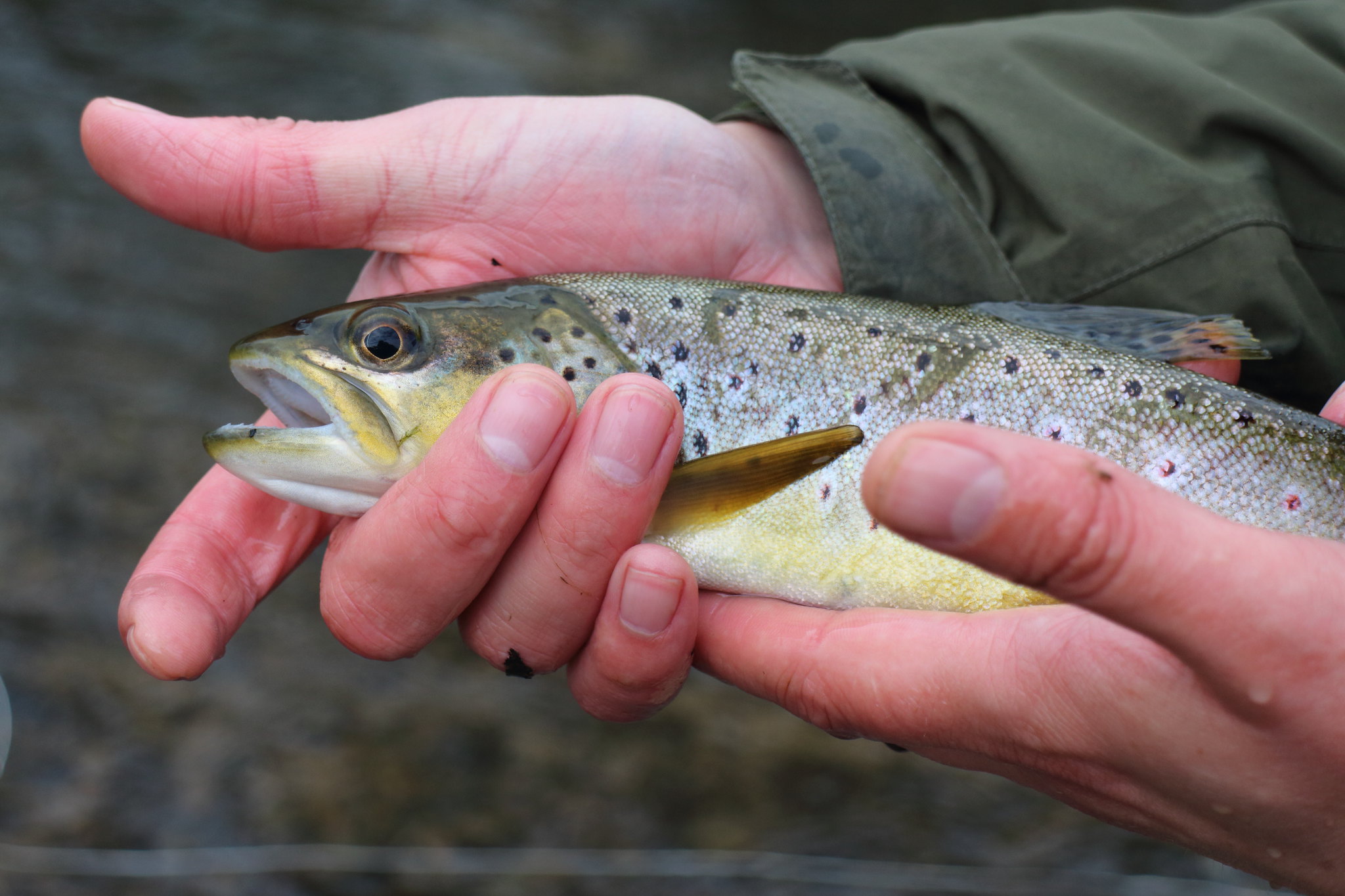 The lack of success continued for some time, we covered a lot of water and some great looking areas without so much as a pluck, jab or the disappearance of the klink. If nothing else it allowed us to gain an impression of the beat and note areas to concentrate on next time. Although we didn't catch anything we did see the occasional fish scurry past, a mixture of trout and grayling but they simply weren't feeding.

As the day wore on the sun started to break through providing welcome warmth and with it the odd olive appeared. We came to splendid run where the river narrowed, a firm gravel bottom interspersed with patches of ranunculas. This was the first run where we saw numbers of olives hatching and fish rising frequently enough to warrant targeting specific fish. I tied on a Barbour paradun and more than once did we mistake it for a real fly drifting down when we lost sight of it. Again the wind was a nuisance, those dead stands of cow parsley which are ever-present along river banks, continually snagged the tippet and fly. This did result in putting down some of the fish ahead of us although I missed two rises and landed two grayling by the time I reached the top of the run. 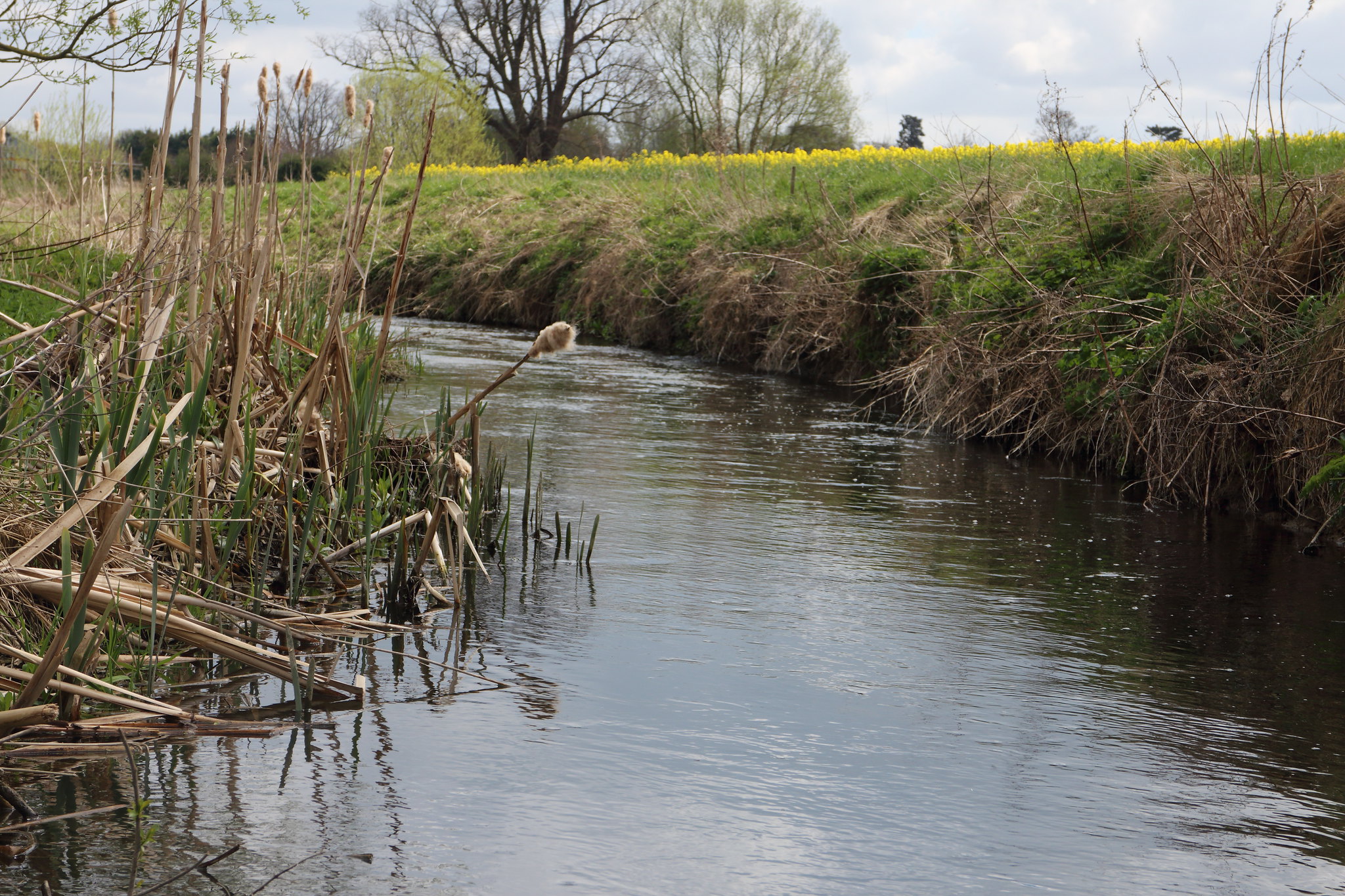 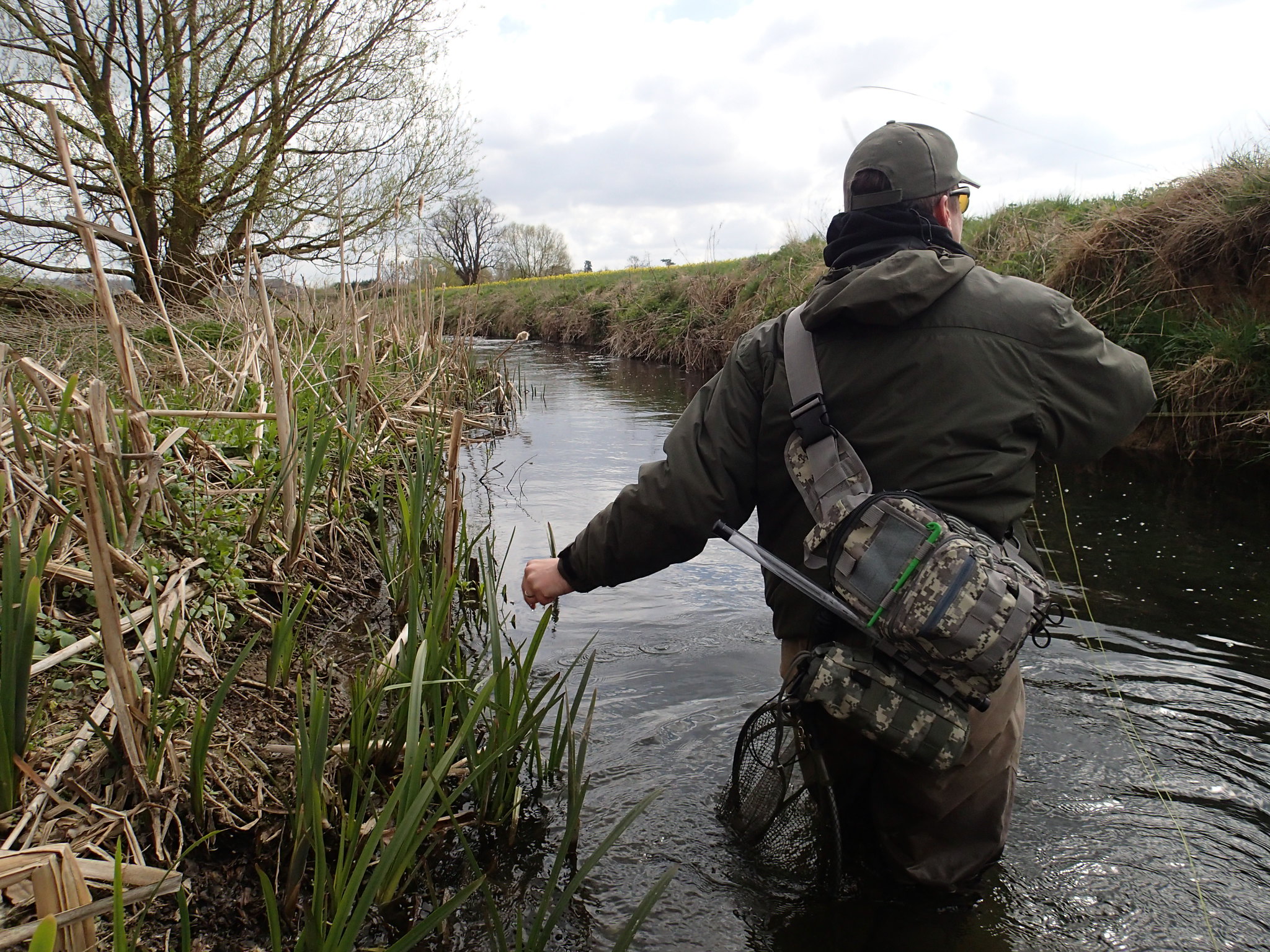 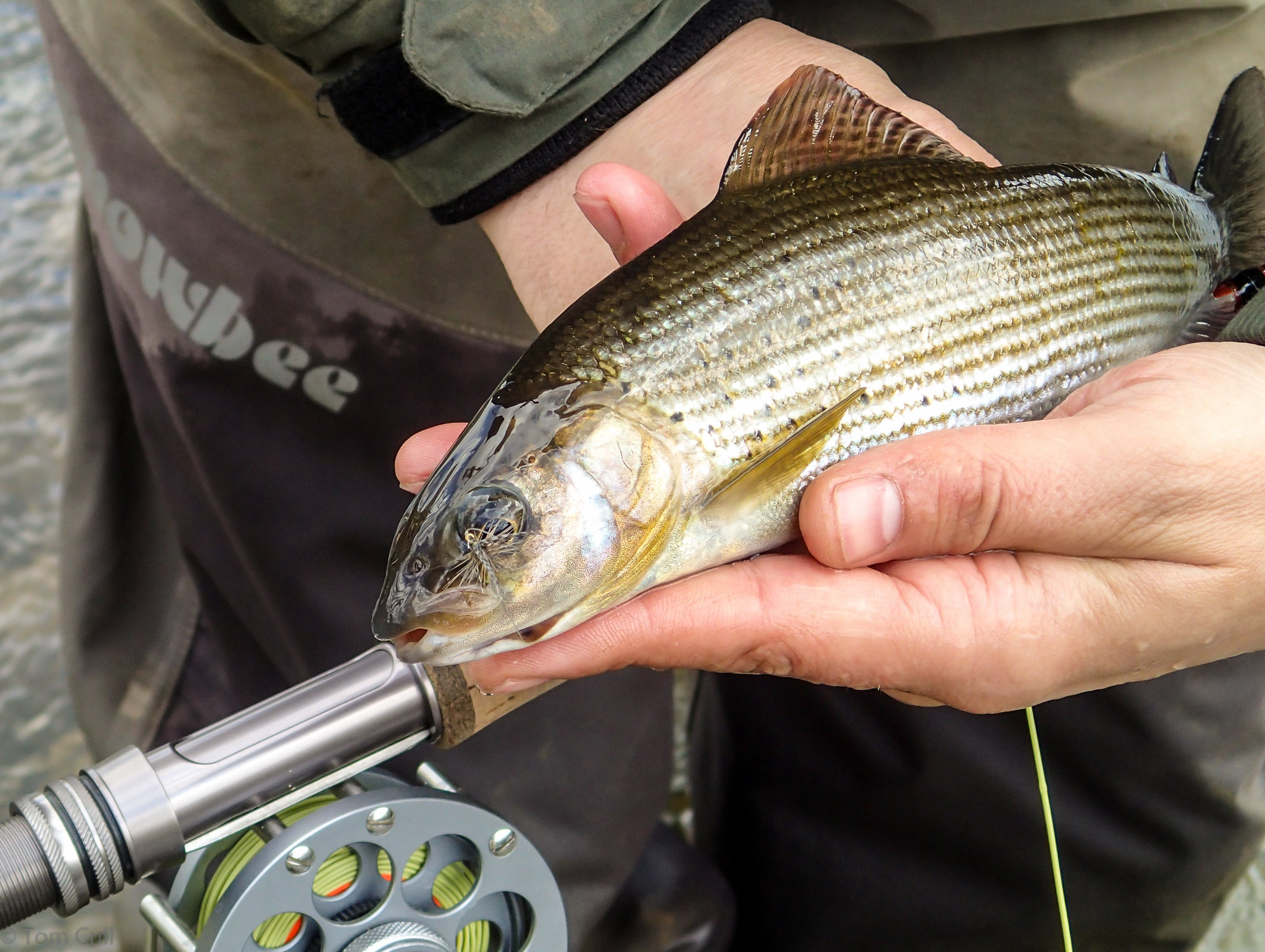 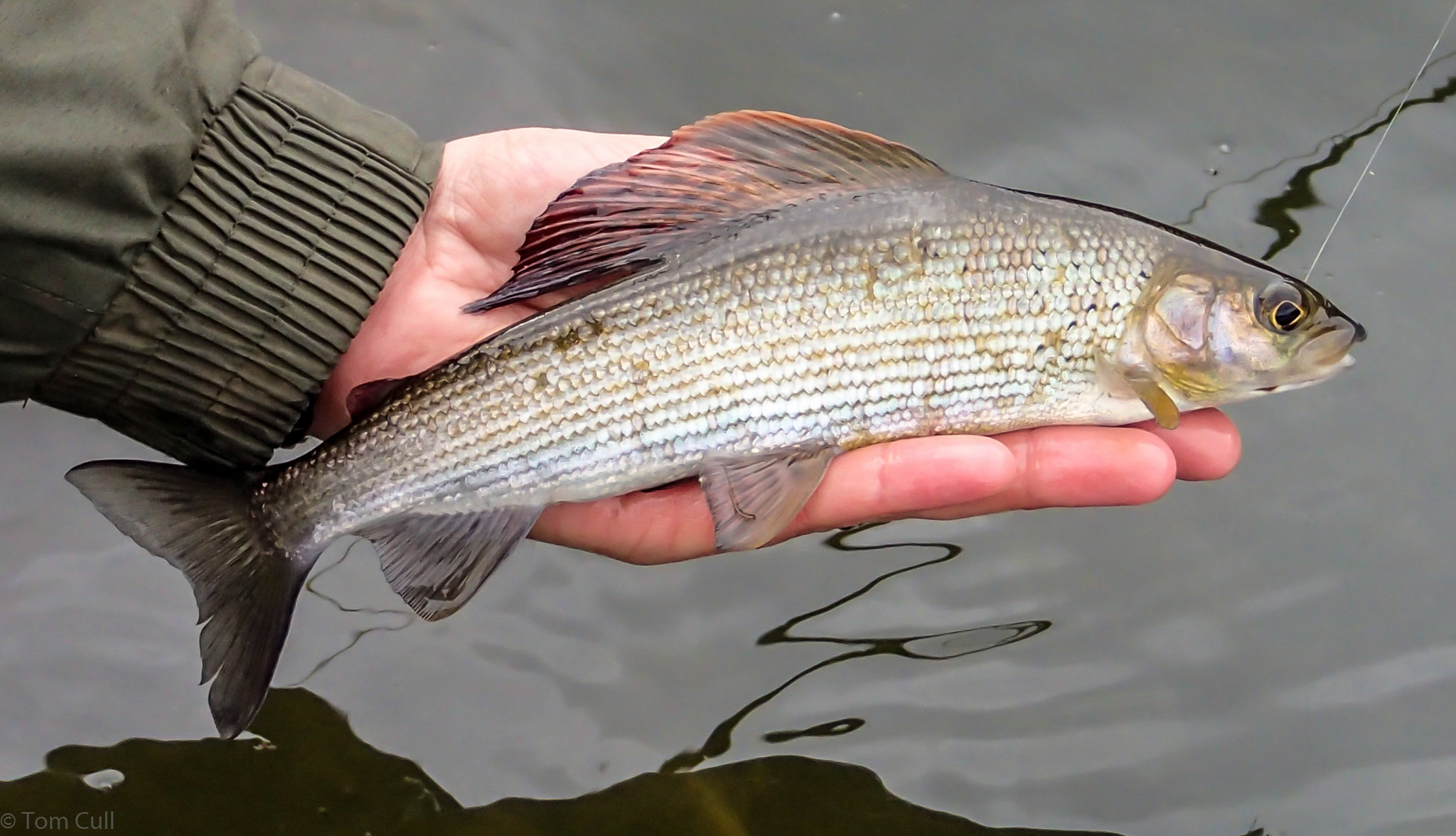 Around the next corner we found a larger pool with a good depth, the smooth surface regularly distorted with rises across its length and into the riffle above. Tom fished this pool as I had fished the most of the last and with lots of resting managed two grayling, I failed to tempt any of the fish rising at the head of the pool. I had lost a couple of flies and tied on a Phd as I had run out of Barbour paraduns, both flies share the same great profile but having differing materials for the body. 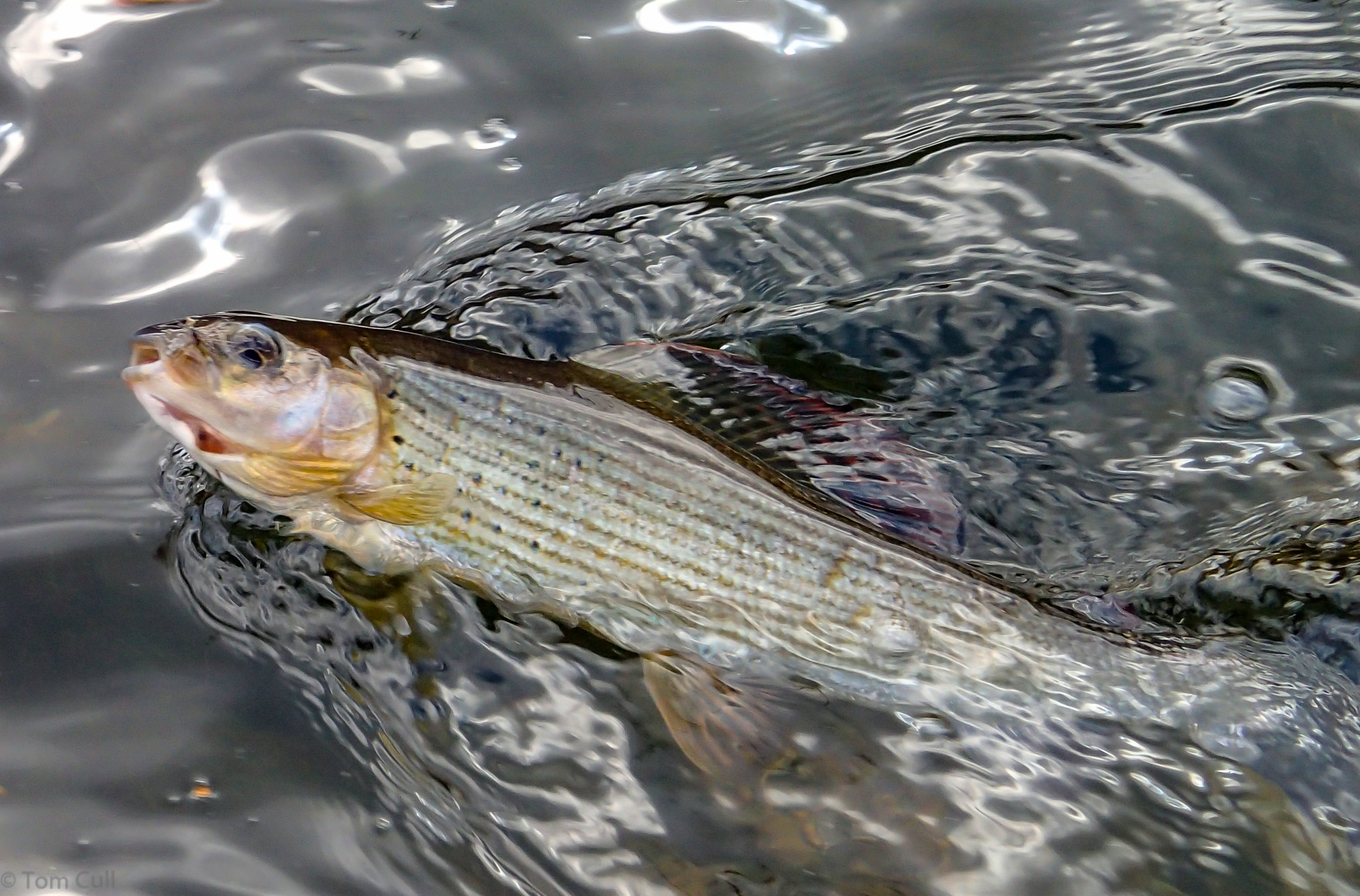 As it was still my turn we continued walking up and fishing the popply water above and into the next pool. Arriving at the next pool a fish quickly gave its position away with a confident rise, I covered it with a couple of drifts and the fly disappeared. Lifting the rod firmly the fish tore off upstream taking line off the reel before dashing back down leaving me struggling to keep tension. The fish ran into some branches and again swam back upstream leaving my fly line caught under a sunken branch. Tom helpfully lifted the offending branch allowing me to untangle the line, because I had concentrated on freeing the line I was unaware the trout had dived into some more branches ahead of me, this fish knew all the tricks. The 0.127mm tippet held and I eventually brought the fish down to the net, the Phd I changed to lodged firmly in its scissors. A well mended fish of around 14", it was a similar colouration to the large fish from Friday afternoon. 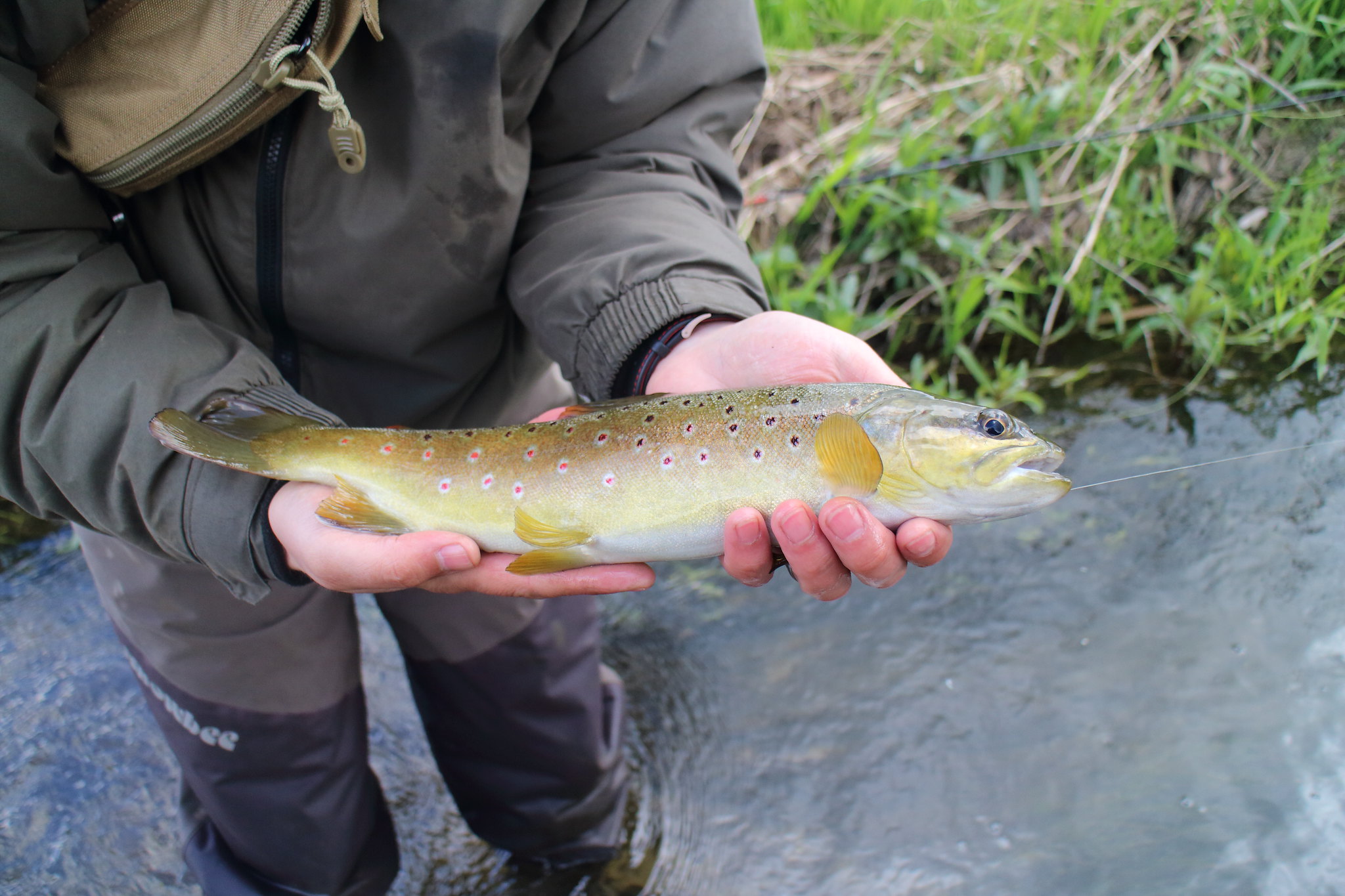 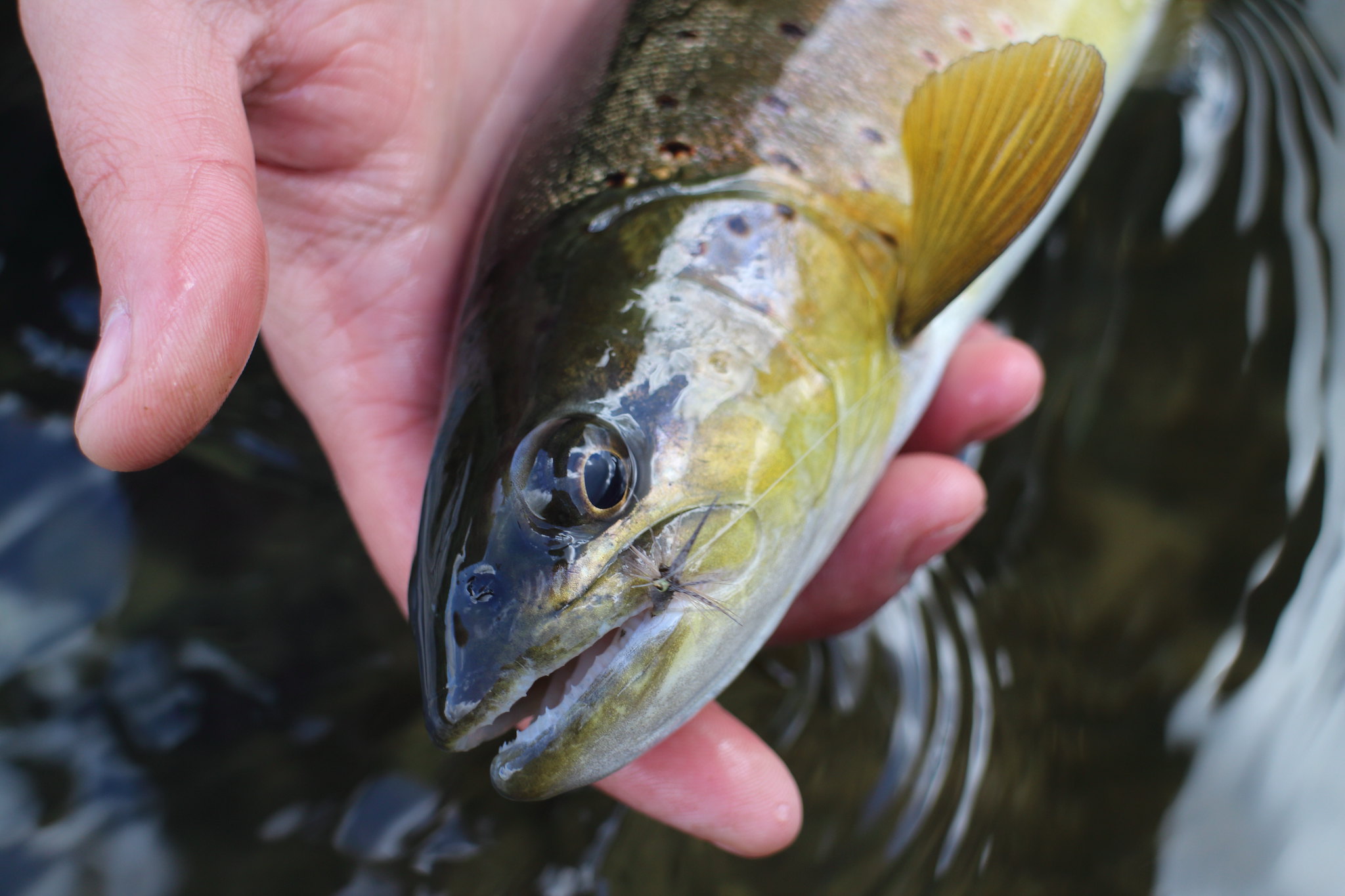 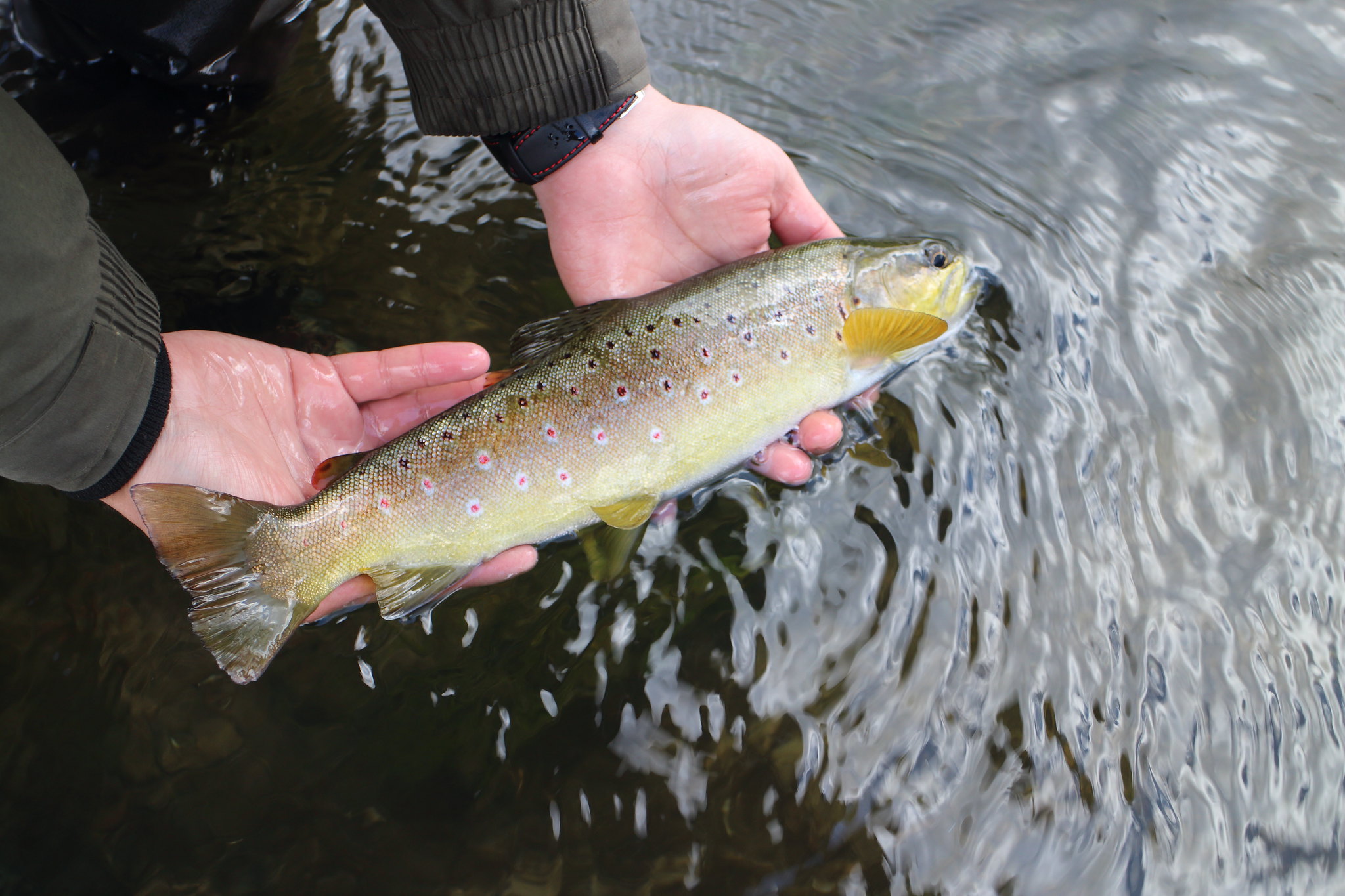 Above we found another run that looked promising and Tom winkled out a trout on a BPD. Walking further up the beat to see what the rest of the river looked liked, we didn't fish as I needed to head back. The river looked even better with some really enticing pools and runs with a lot of fish, we saw many trout and grayling with one trout easily going a pound and a half. I was left with a great impression of this beat and I will certainly be heading back soon. 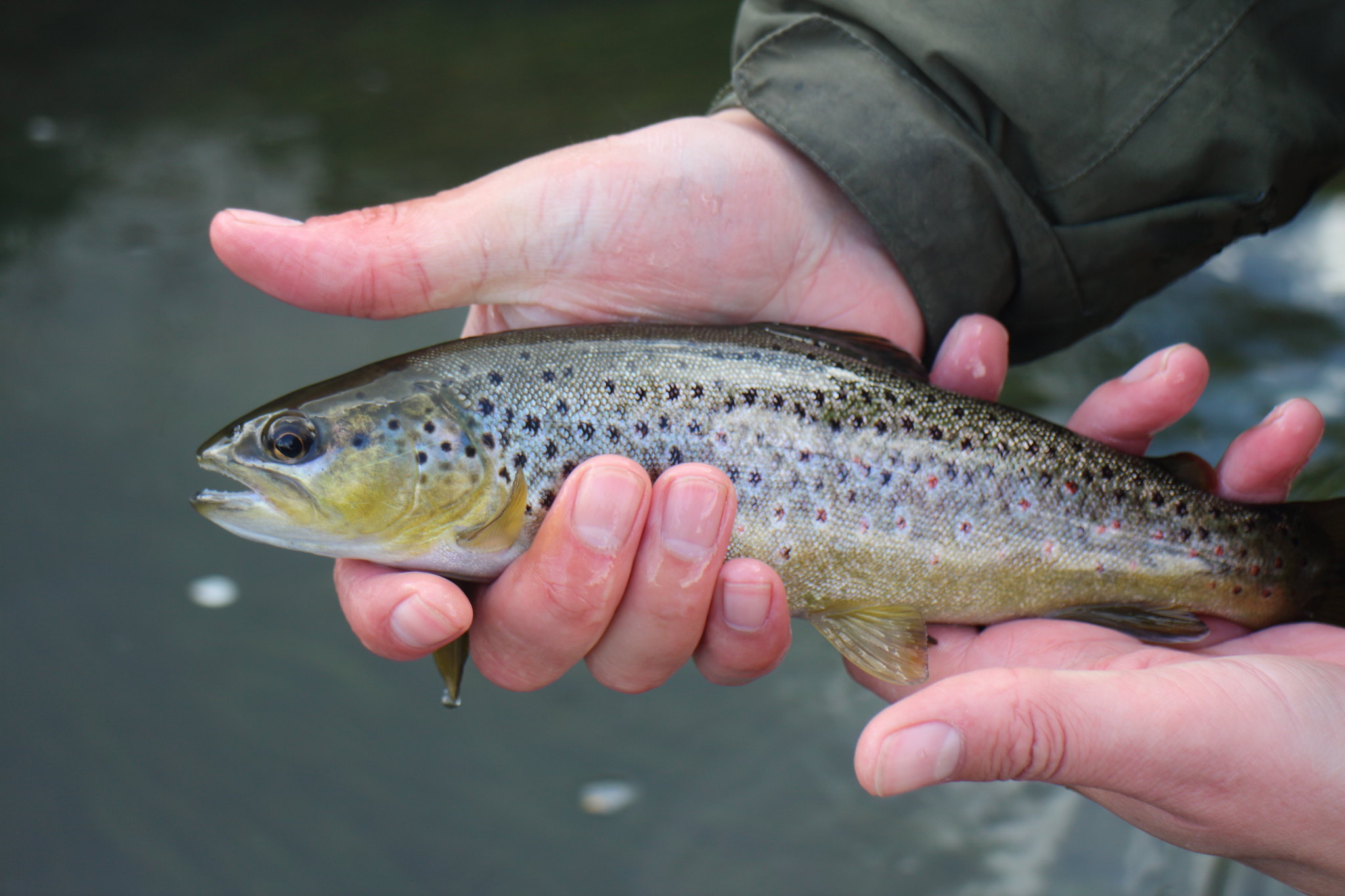 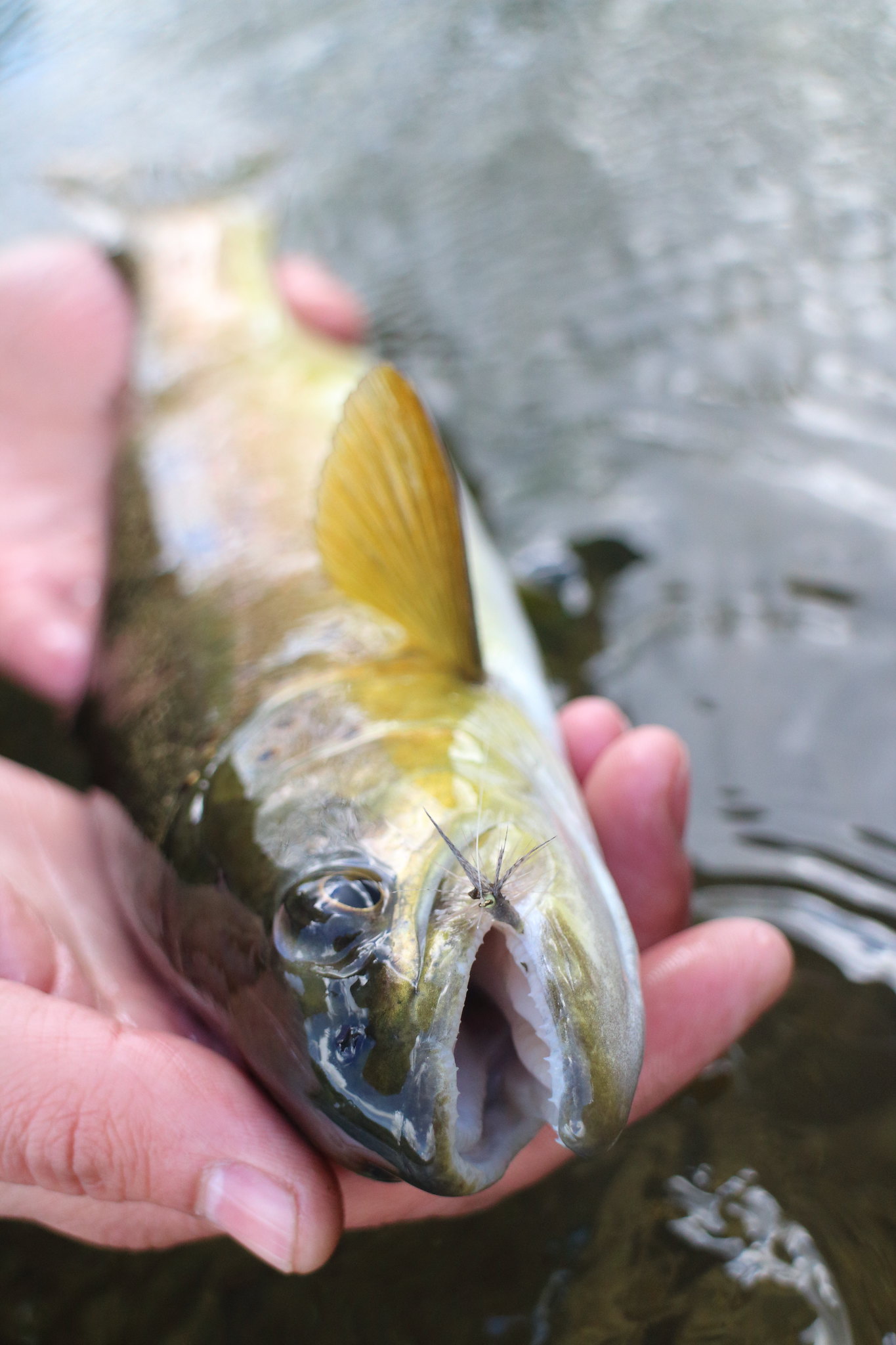