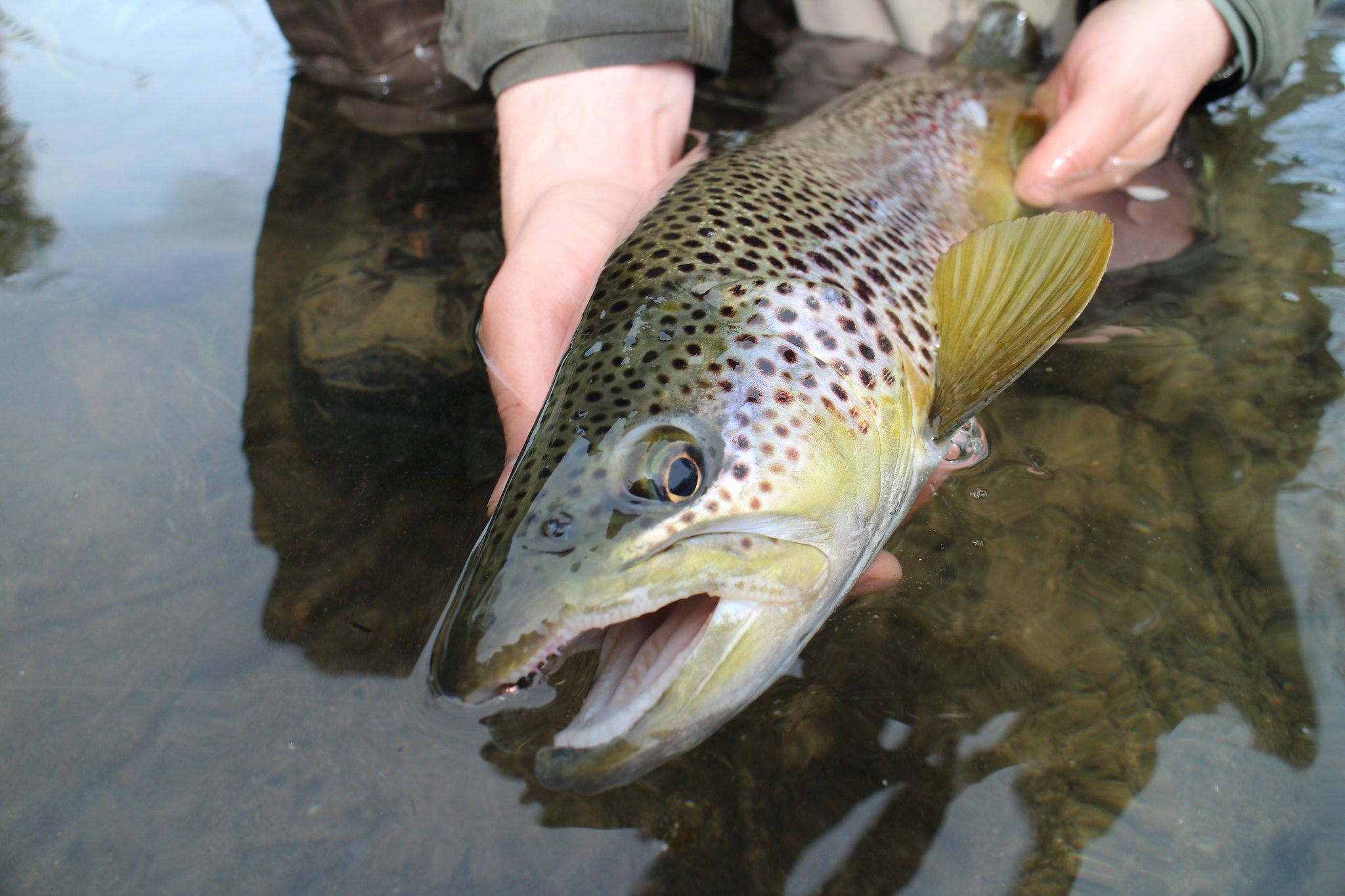 ...is the one that leaves its mark on your memory.

A long day yesterday. I met up with Steve and Richard Barrett of Small Stream Brown Trout fame at just after nine. I wanted to show Steve the urban stretch I fish and afterwards we planned to fish a beat at the very bottom of our club waters. We had a long natter about all things fishing, compared rods, exchanged thoughts on the direction of our club and the management of the river.

The three of us walked down to what is considered the bottom of the urban section, on the way down we spotted trout, chub and other coarse fish although Richard and I remarked on the reduced numbers of fish altogether. Steve and I set up next to a weir, Richard spectated and offered to take pictures. 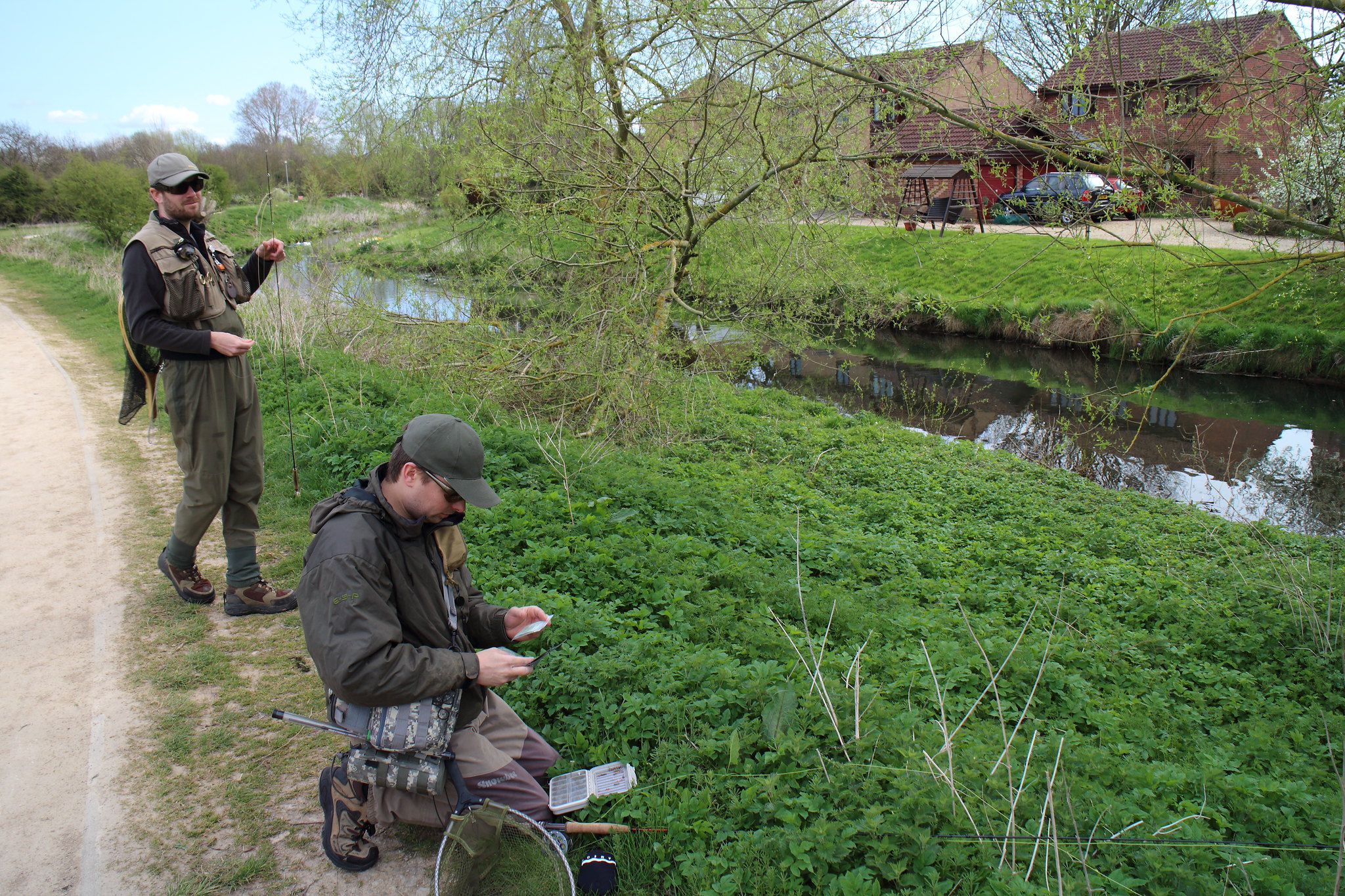 I set up a duo with an Adams klinkhamer and JP pupa tied New Zeland style with the dropper tied on the bend of the klink; Steve set up a single dry-fly tying on a CDC olive. 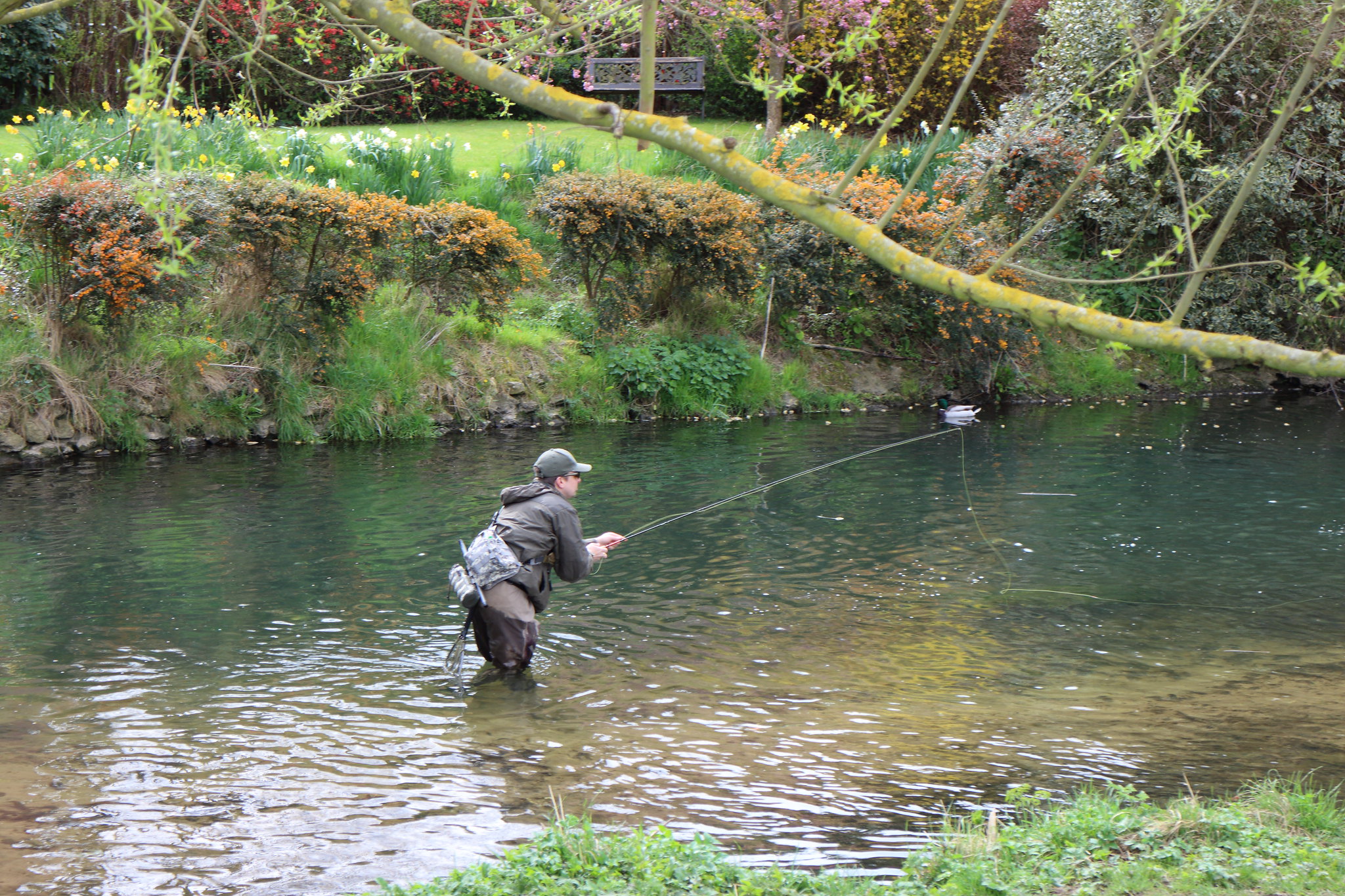 Steve offered the first go to me. Wading into the water at the tail of the weir I concentrated on the faster current and it wasn't long before the klink dipped under. As I played the trout, another larger one, chased the sunken klink as it was dragged around below the waters surface. 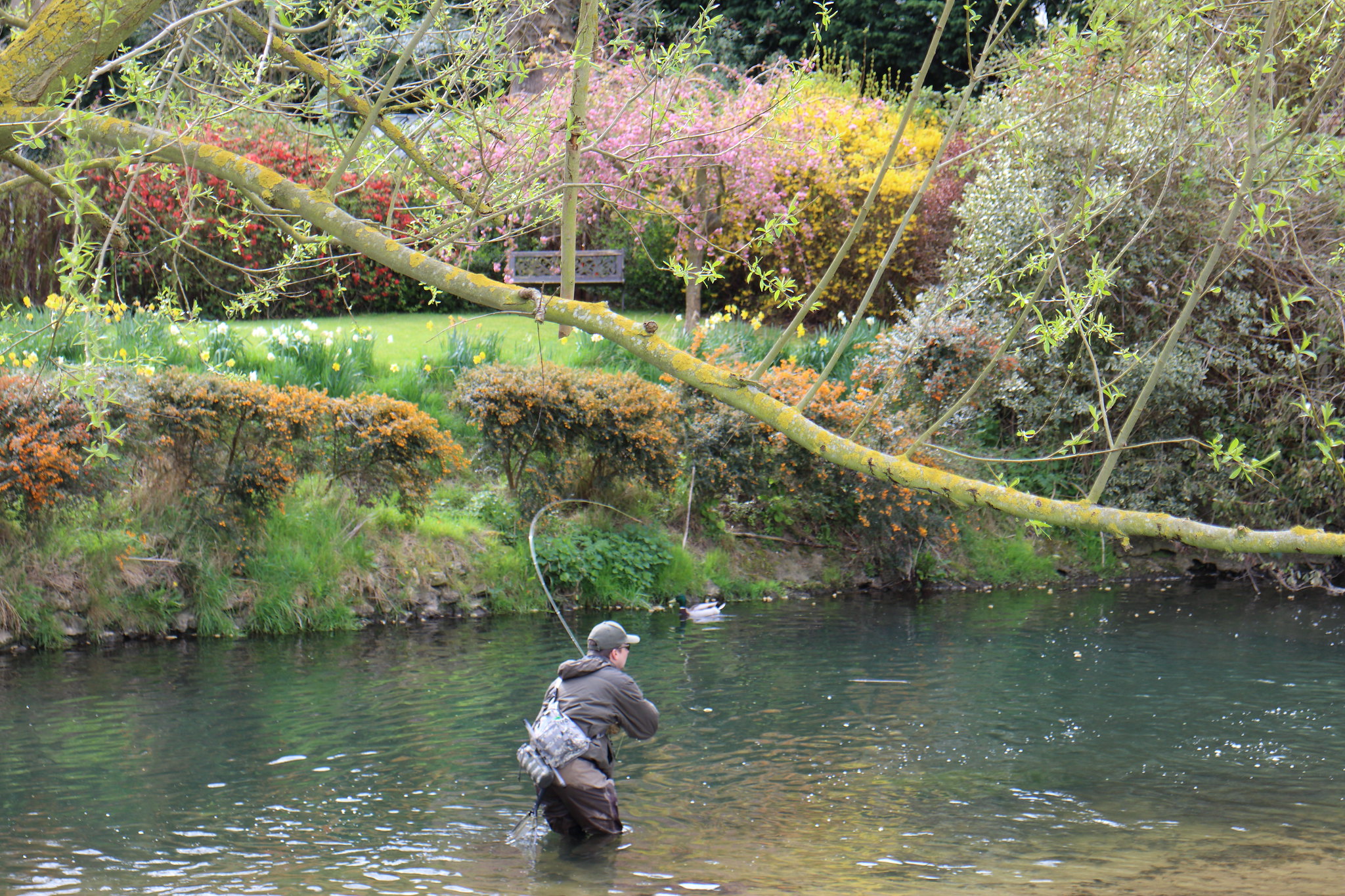 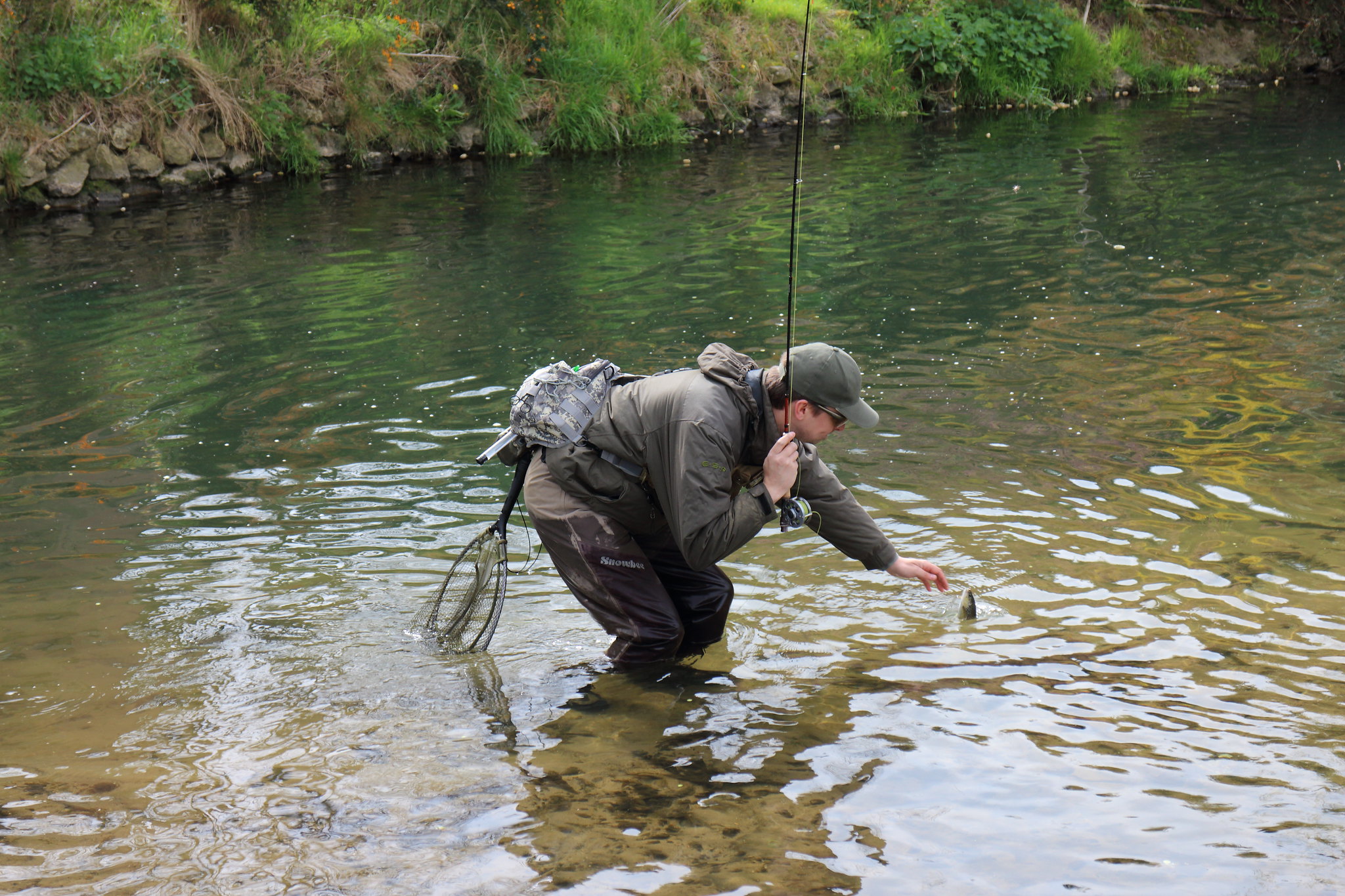 I handed over my rod to Steve and he picked up where I left off. It wasn't long before the rod hooped in to a trout, it looked like the one had chased the sunken klink as it seemed the same size. 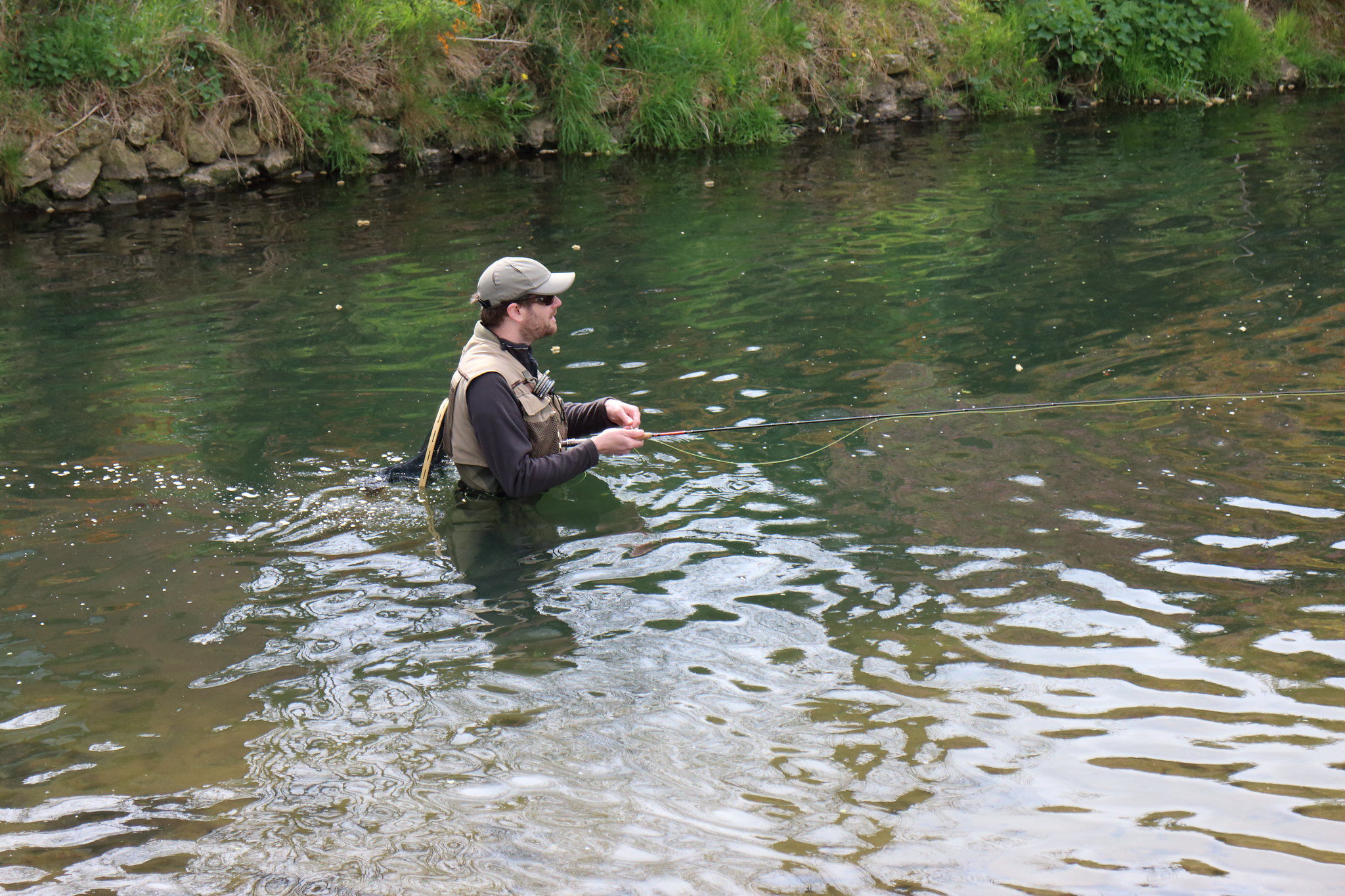 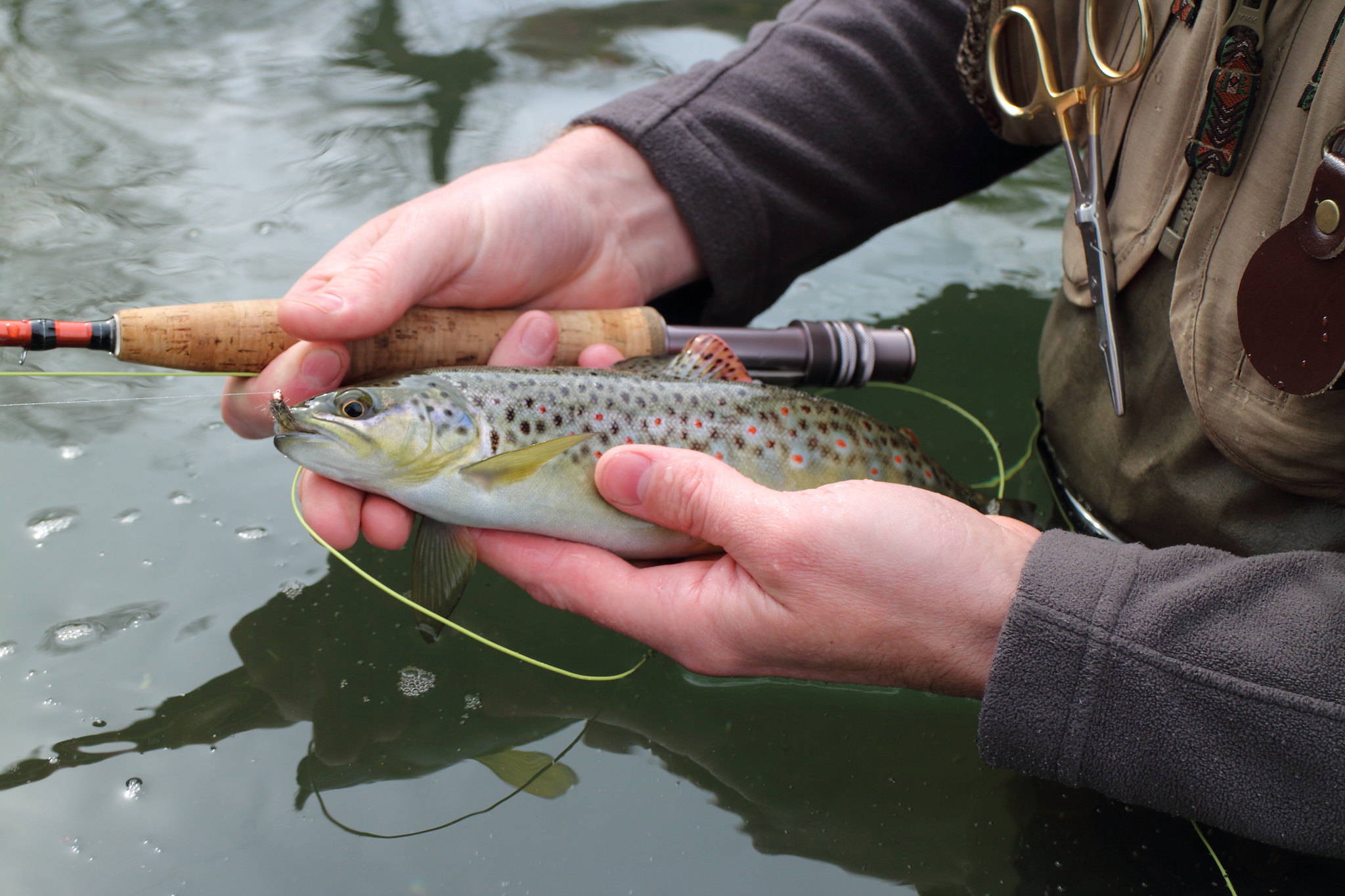 Richard parted company with us as we finished fishing the weir. I managed to hook and lose another fish before we moved on.

We found a couple of trout further upstream close to a big shoal of mixed silver fish. Steve used a killer bug and tried to tempt them although he managed to hook a chub that beat everything to the fly.,a plump fish over a pound. We continued walking back upstream spotting fish on the way but they mostly turned out to be chub and dace.

The weir that yealded the 3lb'er last June was our next stop. We quickly fished through the pool, Steve landed another chub - I sneaked a picture as Steve gently released it - and we managed a trout a piece and I bumped a couple as I all too frequently seem to do this season. 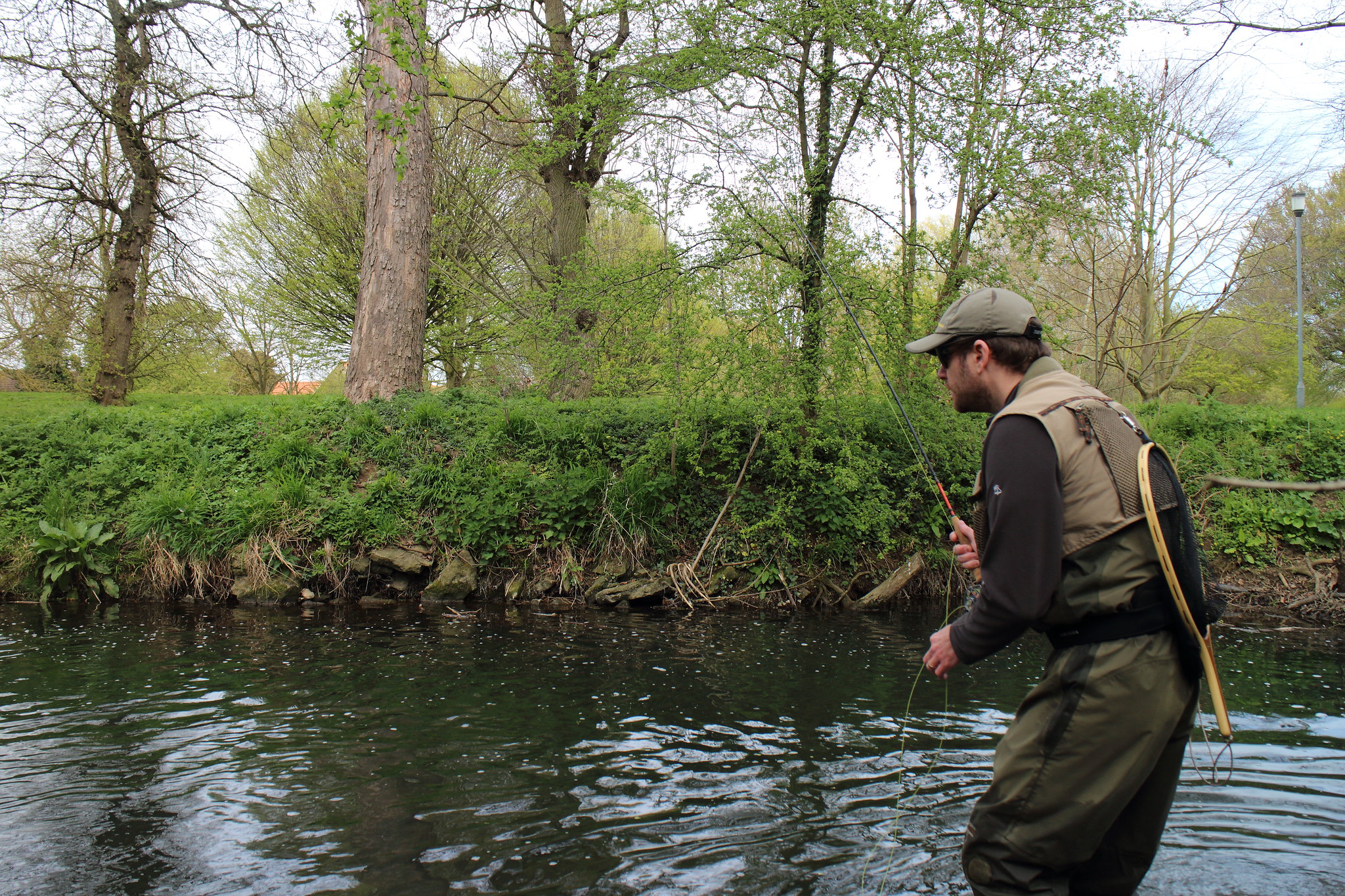 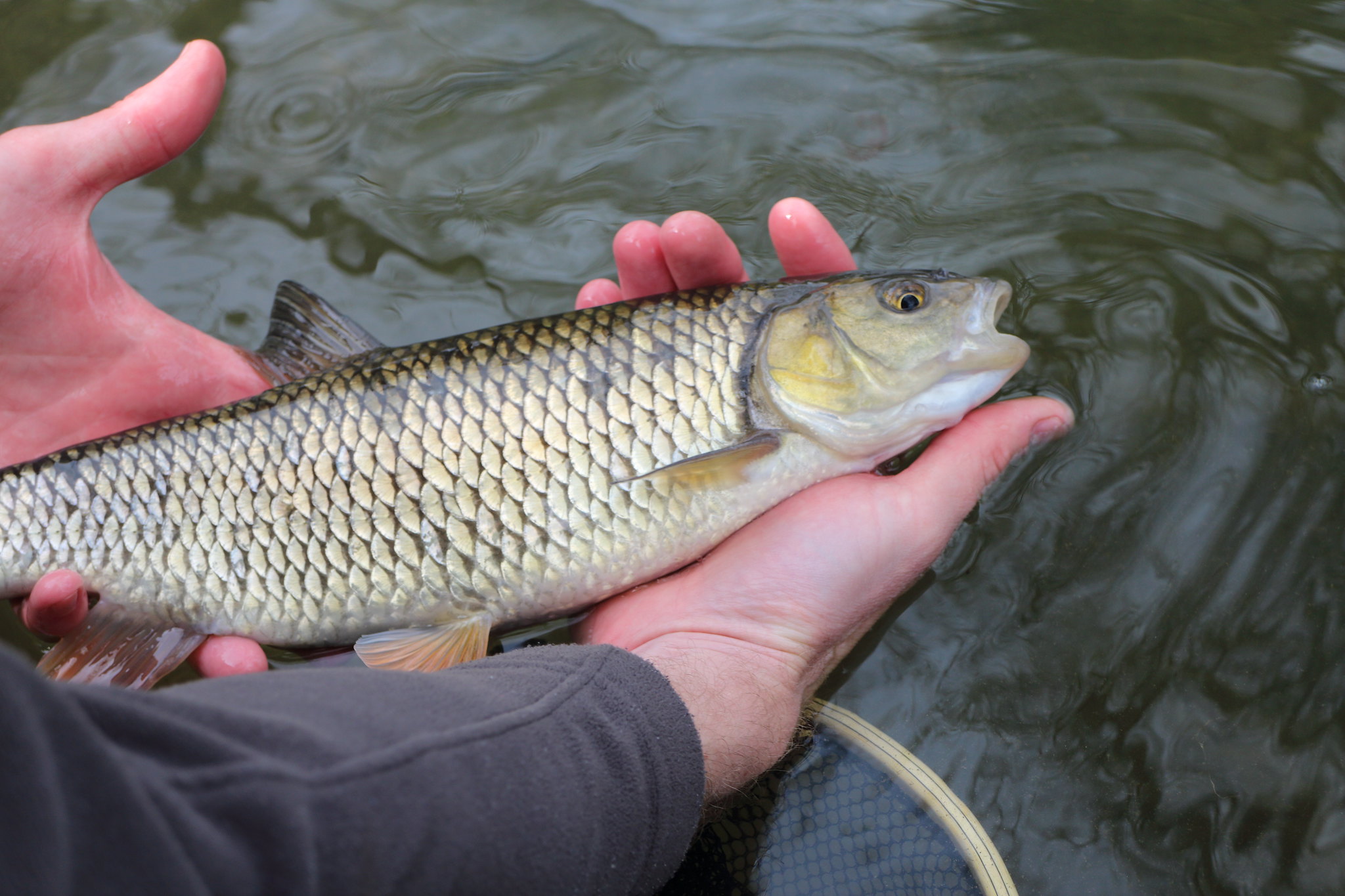 A small group of good sized trout sat in the pool below the outflow under the white bridge. Steve tried for them and learnt the golden rule of these urban trout - once chance only. Without success we continued on our way vowing to have another go when we walk back as our cars were parked nearby.

I really wanted to show Steve as much of the urban stretch as possible. Walking upstream we mostly came across shoals of coarse fish, very few trout were showing. We found a wheely-bin in the spot where I had the two large trout last summer, complete with black bin bags full of rubbish - amazing! As I pulled the bin out, a large trout lay just under the bridge against the very far side. Steve tried with his killer bug despite my protestation that the fish was spooked and that we were lucky it was still there to be seen. One cast saw it move out of the way as the fly drifted down - 'I told you' was my statement to Steve. He tried again and I stood gobsmacked as I swear it ate the fly, Steve missed it as he hadn't seen the take and then missed the fish when I told him to lift.

We didn't walk any further and headed back down.

Trying again in the out-flow pool Steve landed a nice little fish caught on a klink as I spotted from on top of the bridge. 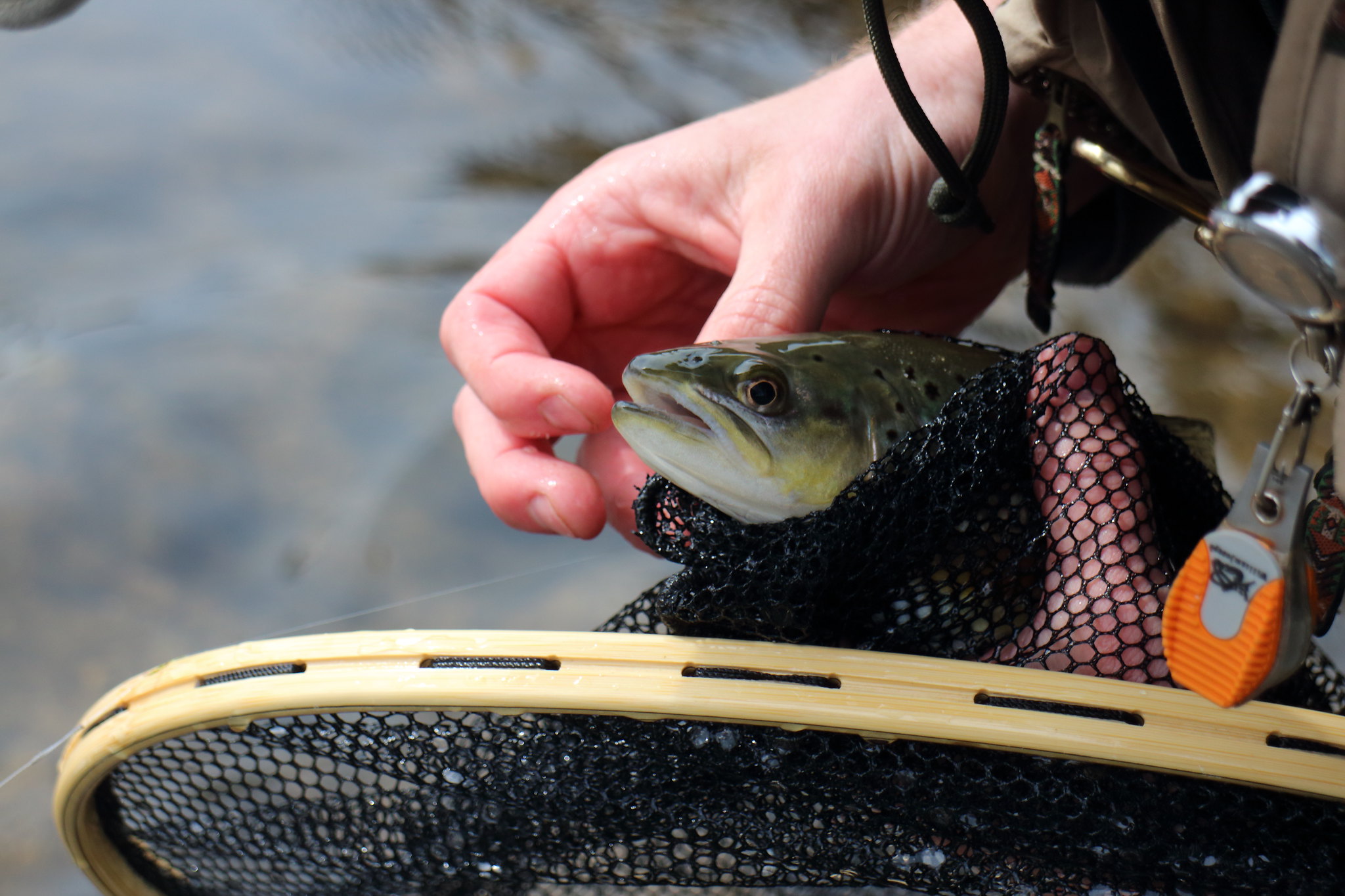 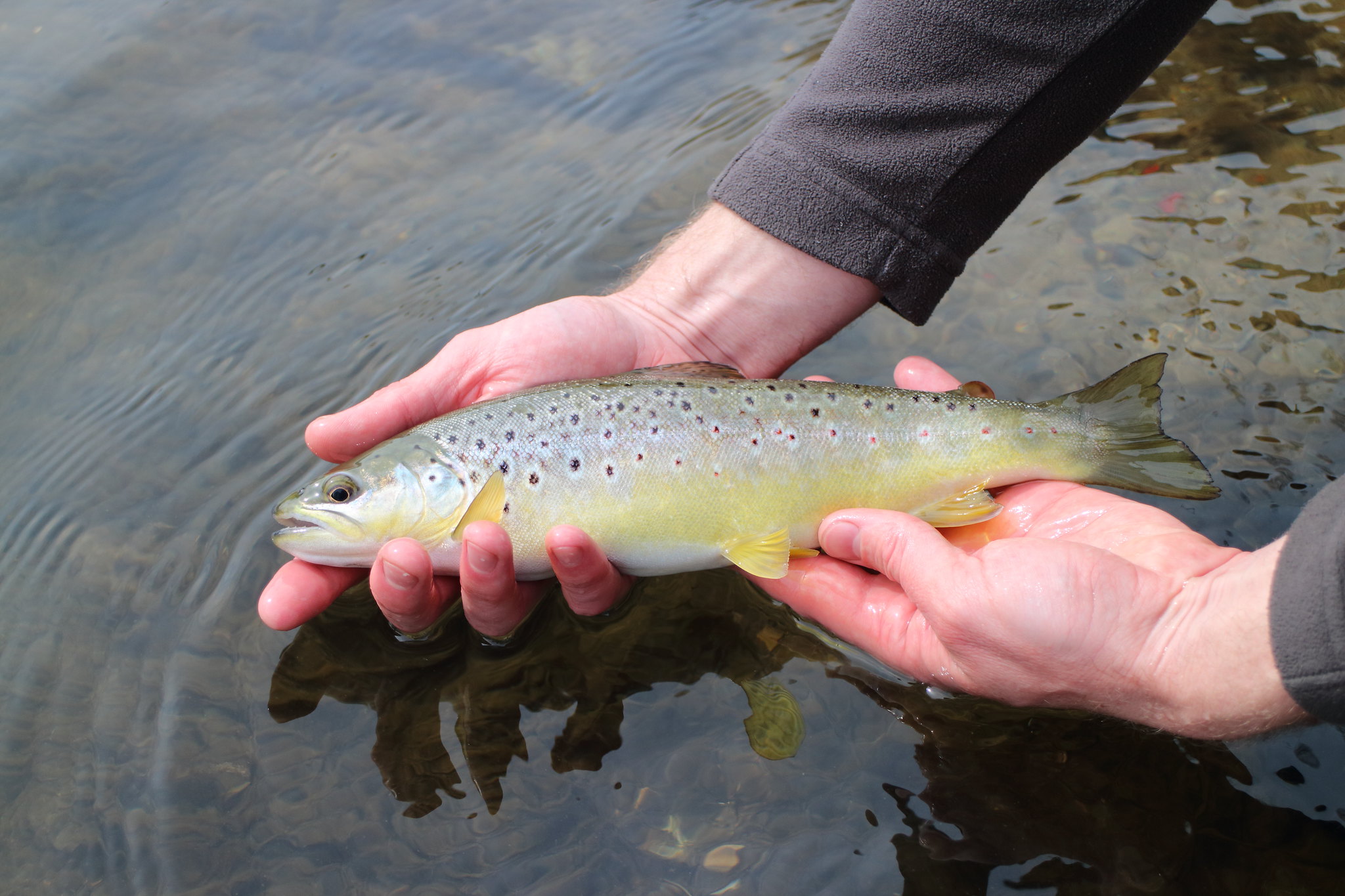 Unable to resist the urge to have a go I made several attempts to lure different fish without success. As I was pulling the fly up to re-cast, an unseen trout shot out from nowhere and lunged at the rapidly departing fly, it was too late, the fly was ripped away as I already committed to another cast.

I desperately scanned the pool looking, but I simply couldn't see where this trout went. Just as I was about to have another cast I saw exactly where the fish was - laying parallel to the outflow ledge and only inches away from its edge. This was a fish neither of us had seen earlier. A well placed cast just to the side of it, proved deadly, the trout moved purposefully off its position and without hesitation it sucked in the JP pupa. I lifted almost with shock as I didn't fluff it up and miss the fish. My dilemma now was that I was on a bridge and needed to get down to the water, making my way round the bridge and some railings I was conscious of not losing control of the fish and ultimately losing it altogether. 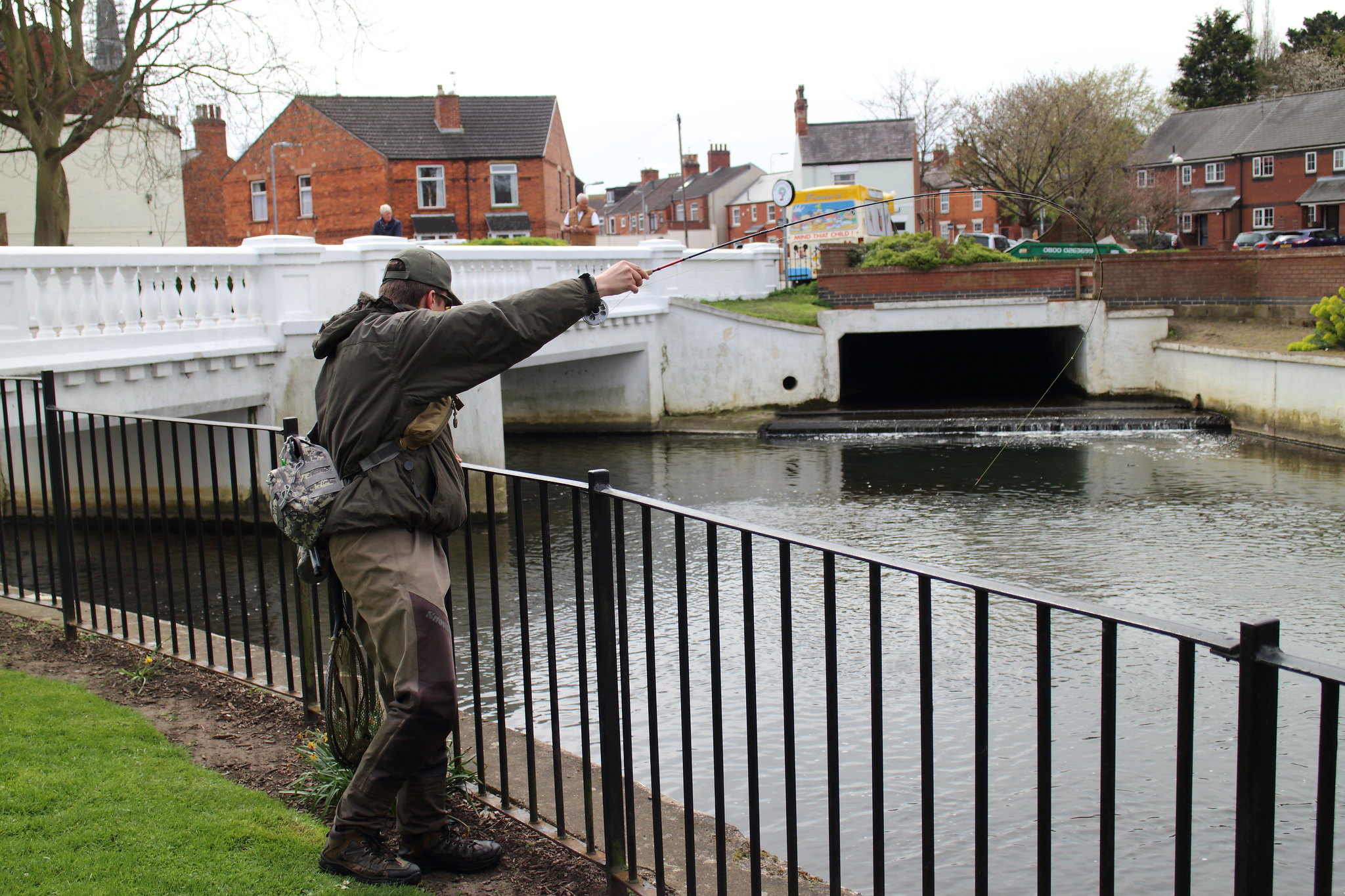 It has been a long time since a fish made my arm ache through a long and powerful fight. The fish was immensely strong, it jumped once failing to gain any height and fought doggedly as I tried to get its head up. 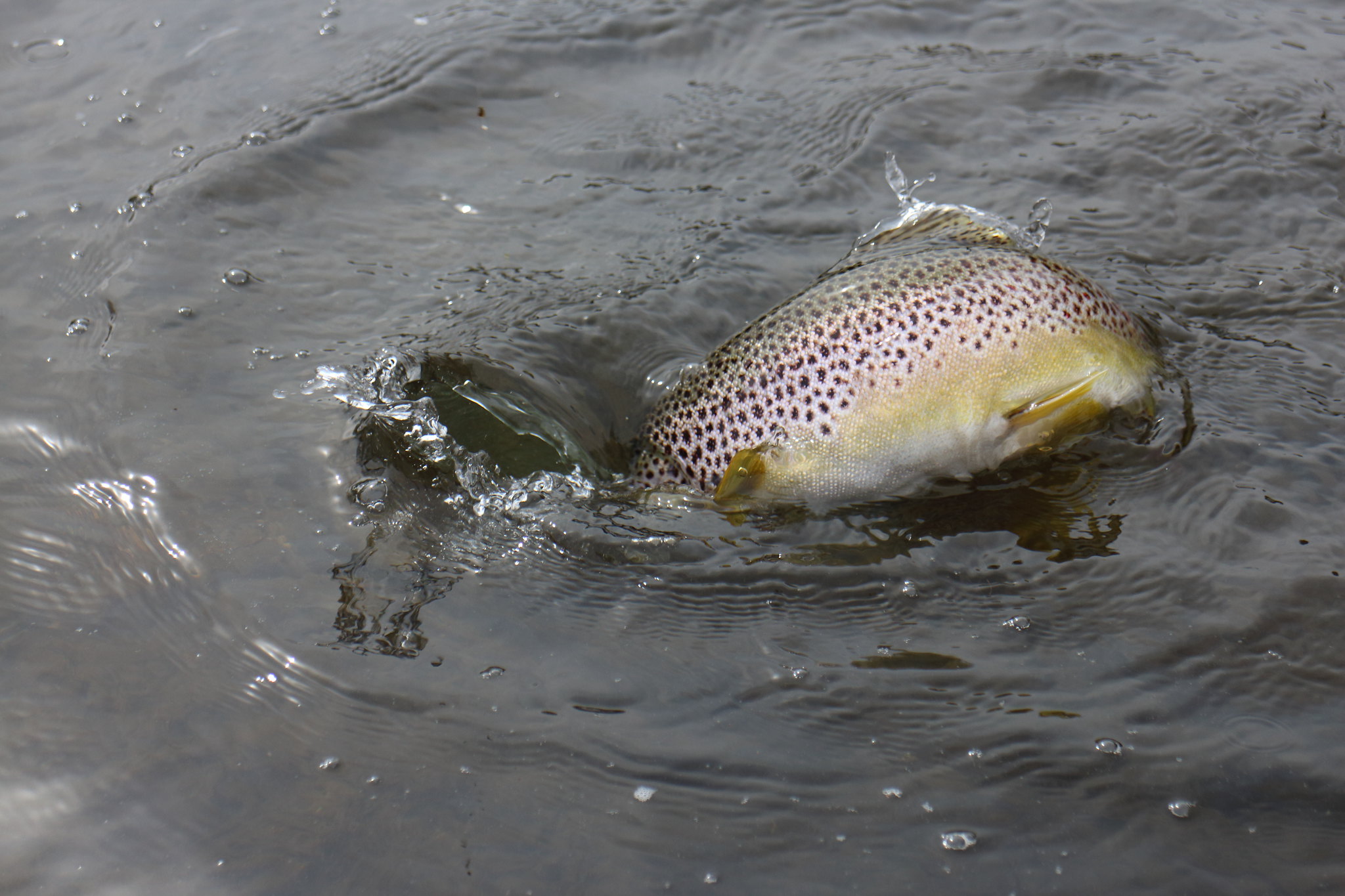 Eventually the fish slid head first into the net still full of fight and energy. Steve and I stood there staring in the net at the sheer bulk of the fish, it was in truly great condition, very plump. Weighed and measured the stats are 17" long and 2 1/2lb in weight, we agreed the scales weren't the most accurate so it could have weighed more but a brilliant fish regardless and a horse as Glen Pointon would say. 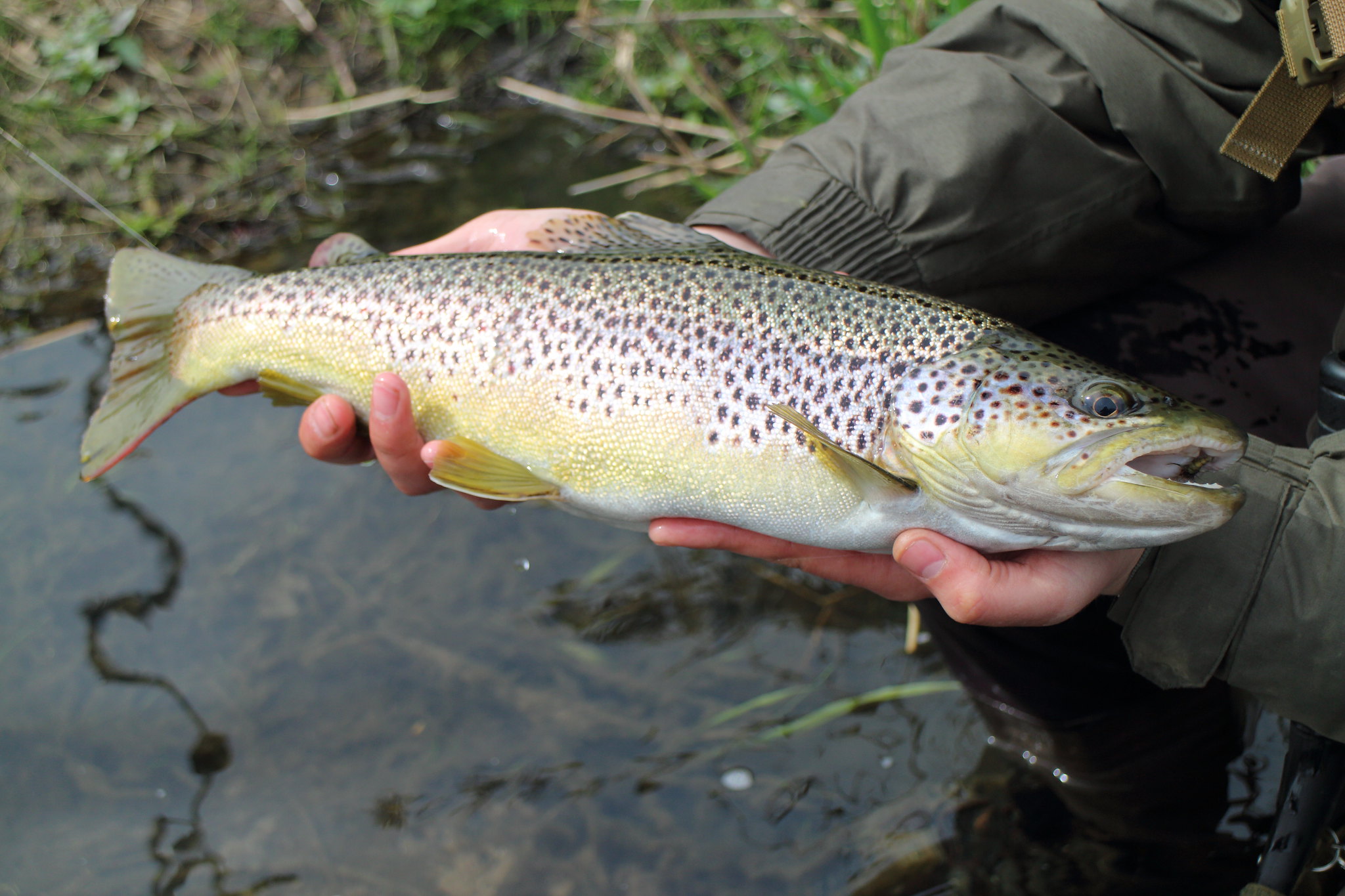 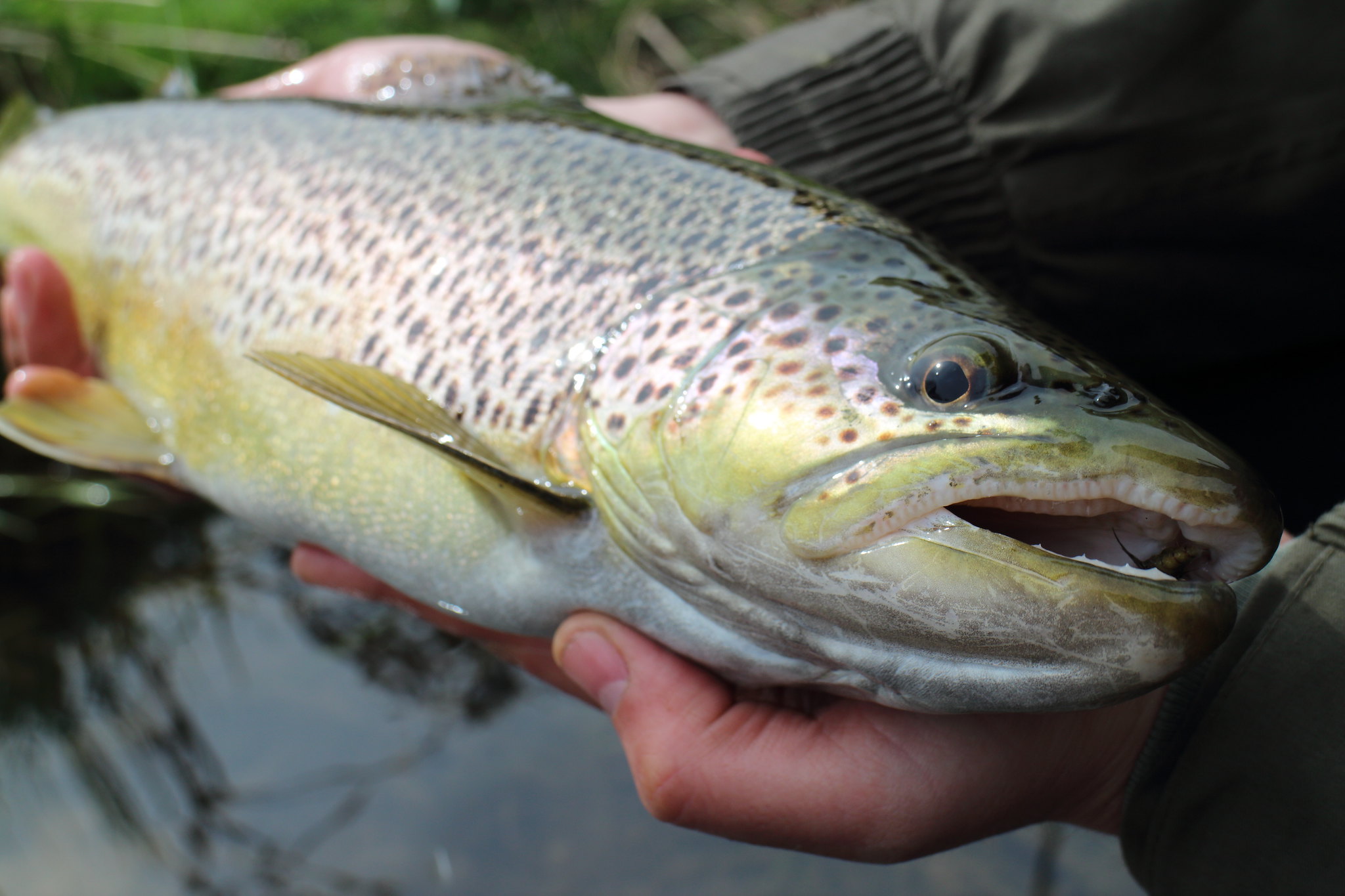 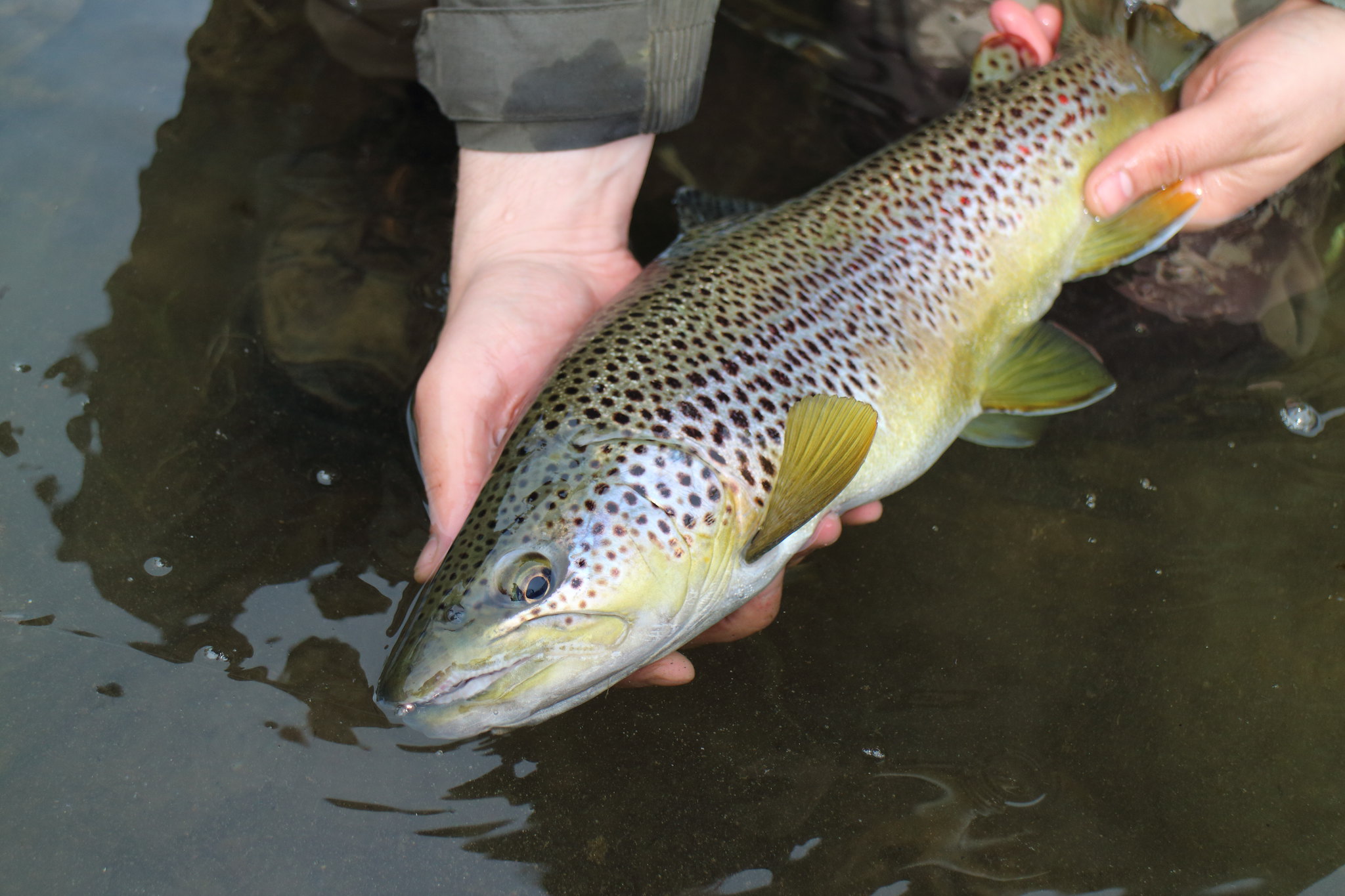