This week I have mostly been tying...(part 2)

After stumbling across the Utah Killer bug, I knew the sample of yarn used to tie it wouldn't last me long. I bought some balls of the same colour, Oyster, along with two other colours I fancied trying.
One of them was similar to the Oyster. Called Fog this yarn looked a lot greyer and in the hand contains a lot of green streaks. This I wanted to use for general shrimpy bugs, tied as the UKB is but providing a different shade. The other yarn called Leprechaun is a multi tonal green yarn with yellow flecks running through to break up the colour. When I saw this colour I immediately thought Rhyacophila larvae. Although the wool turns darker when wet it still makes a nice fly. The fly tied with Fog caught me a number of roach from a small pool in a river I fish. This may mean nothing but those same fish refused a JP Caddis Pupa when it had been hammering all other fish in the river from dace, chub to trout. I feel it has already earned it's place in my fly box.

There are some other colours that I am looking at; there's an apple green which looks spot on for the proper shade for a Rhyacophila, so watch this space.

I had a camera this time.

A rare occurrence today; a whole days fishing. I made sure I had a working camera as my last session was up there in the top five this season. I managed many good fish culminating in a dry-fly caught trout of nearly three pounds and not a single picture could be taken. (Dead mobile)

With many hours at my disposal I had no need to rush. I'm really enjoying a more relaxed style of fishing this year; you could almost say it was a more mature style of fishing. First port of call was the top weir on the beat of my urban river. As a rule I generally fish above the weir, the river is flat smooth and perfect for watching sighted takes to nymphs. During my last session I fished another weir using two JP Caddis Pupa and caught a number of dace, roach and size-able trout. I decided I would fish that method again. There are only trout in this pool, the main basin being about the size of two bath tubs placed side by side. Creeping into place I disturbed a couple of trout one being a decent size but luckily they went across the river avoiding the main pool.
Within a couple of casts I caught a small trout. I knew this wouldn't be the only one so I persevered, and before long I hooked what I was after. When the reel sang and line peeled off the spool I knew it was the daddy of the pool. Quickly subdued and in the net this was a fantastic start to the day.

After I released the trout, I crawled to the concrete weir keeping low, there are often fish very close to the sill. As I sat by the side of the river, I took off the JP Caddis and replaced it with a single Sawyer's PTN. I scanned the river immediately in front of me and couldn't see any fish. This forced me to make my way over the sill. A stealthy approach still couldn't stop ripples waving up the pool but I minimised them as best I could. I spotted a fish laying upstream of me; it was around ten yards away and I couldn't see any other fish between myself and the target fish. I took a couple of casts to tempt the fish, which drifted to its left to intercept its meal. I nice fish but it spooked all the remaining residents which is typical for this section.

I wondered downstream past a foot bridge which is a favourite area for people who feed the ducks. Downstream of the bridge the river is wide, shallow and sluggish. There is a good head of fish in this area, the extra nutrients provided by a regular carbohydrate intake mean they are bigger than average. But there is no cover over most of it, no bank side vegetation or in-stream weeds. In the past I skirted this part of river, the fish I deemed too spooky to bother trying for. Well not today. It was a fish cruising the margins at the very bottom of the stretch that first tempted me to try. At this end there are a couple of large trees that overhang a little. Suffice to say that fish didn't prove me wrong, I hooked the tree after the first cast and the fish drifted off as I removed the stuck fly.

Across the other side against the far bank I spied a trout. A lengthy cast sent the JP Caddis about a yard in front of it. As the fly drifted down the current started to pull the fly off-line dragging it across the river, this didn't seem to bother the trout, it followed and promptly took it. Of course I pricked it and pulled it out of its mouth. I moved on. Upstream of me a small shoal a silverfish hovered mid-current. I picked off two dace and a chub before they dispersed. As I made my way upstream I managed to catch one of the larger trout which tore off upstream and then back down, it fought well but it made the others edgy. I felt I had cracked that stretch and moved on satisfied.

Again heading downstream I stopped at the next weir. The river between this and the length where I just fished is relatively devoid of fish apart from a couple of trees that span the width of the river. These are prime trotting swims but useless to fly fish. Sat half a yard above the weir sill were a group  of four chub, reasonable sized fish averaging a couple of pounds each. An accurate catapult cast saw my duo of nymphs land slightly upstream of the fish. The point fly quickly caught up in some ribbon weed and was left suspended in the current. One of the chub sidled up to it and sucked it in. I struck too hard and again bumped another fish off. The remaining chub swam up underneath the overhanging willow. I fished the weir-pool catching two trout.

A longer walk to the next stretch I wanted to fish but a discharge of some sort had coloured the water. I continued downstream hoping the colour hadn't reached another area I wanted to fish. Unsurprisingly it was another weir; there are seven in total. During my last session I managed a number of dace, roach and chub finishing off on a super trout around two pounds. This time the silverfish were absent. I wasn't too bothered, I knew there were still fish in the pool. I caught a trout quite quickly, it fought well and I did think it was same trout from last time. Once netted I could see it was smaller and not the same colour; the other was a very dark orange. I continued and hooked a good-sized chub of just over two pounds.

I was fast running out of time, I had so far fished for around five hours. I decided to head back. I had marked a couple of fish and areas worth looking at on the way back. One spot that I couldn't fish because of that coloured water had cleared up. I managed three roach out of a small hole on a big tied with some Jamiesons Shetland yarn. I recommenced my journey back to the car and didn't catch any other fish but I wasn't bothered, I'd had a great day and got the pictures to prove it this time.

A SBS can now be found here.

I stumbled across an interested pattern while I doing a bit of research on the Sawyer's Killer bug. This pattern is called the Utah Killer bug. It seems this pattern has only been revealed and talked about on the US Tenkara forums, many even called it their one fly pattern. As with Sawyer's bug this is also tied with particular materials; the yarn is Jamiesons Shetland spindrift, the colour is Oyster. Pink thread and wire is used to construct this bug. For simplicity I have omitted the thread, tying this as I would Sawyer's Killer bug using just the wire. Curved grub hooks are used instead of standard long shank nymph hooks though I supposed either would work. When wet this fly glows, it's translucent with a fantastic pink hue; I guess this would make a great subtle replacement for the usual pink grayling bugs. I look forward to using this during the winter and will report back any successes or failures.

The wool can be found here: Jamieson's Shetland spindrift Oyster 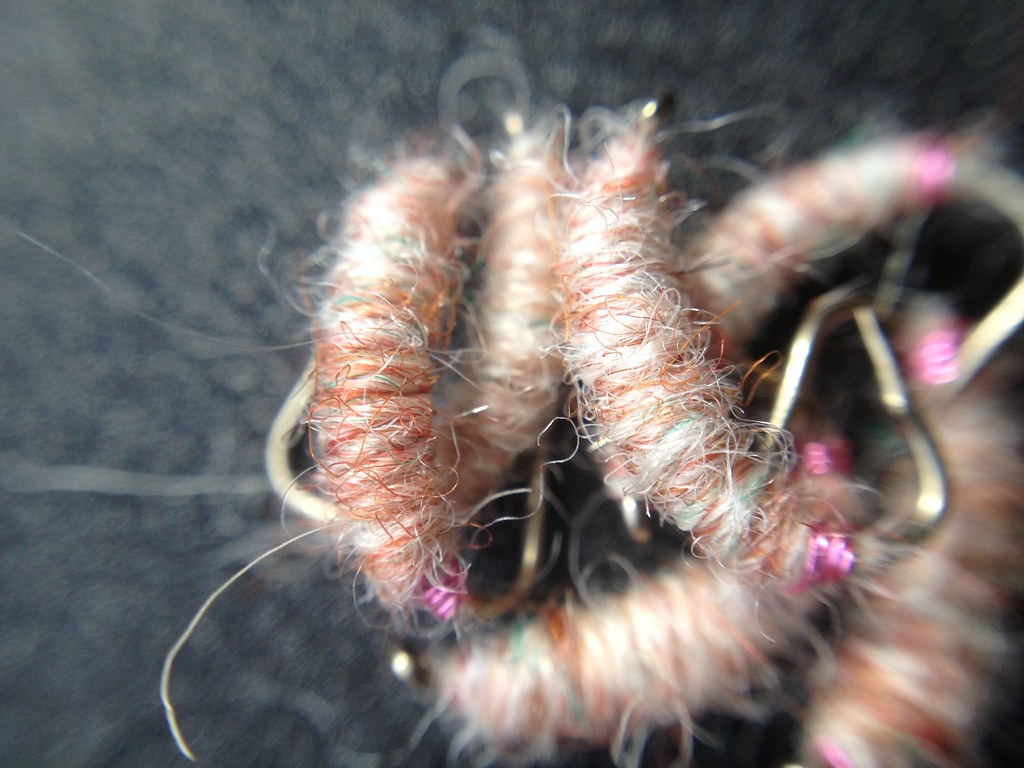 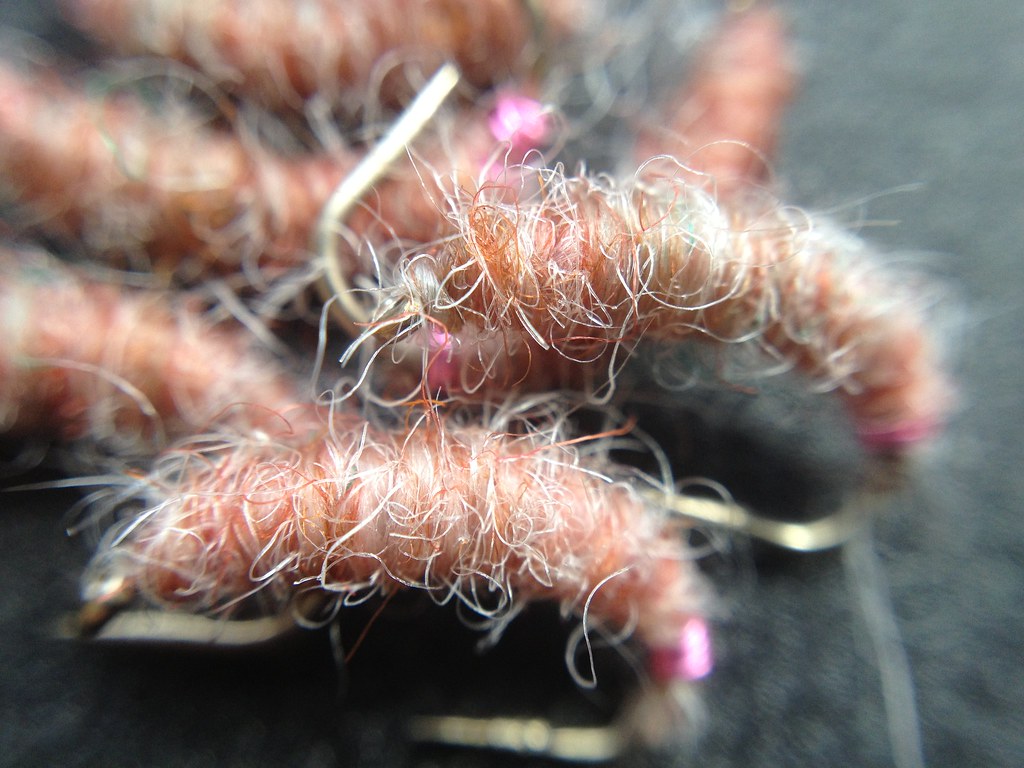 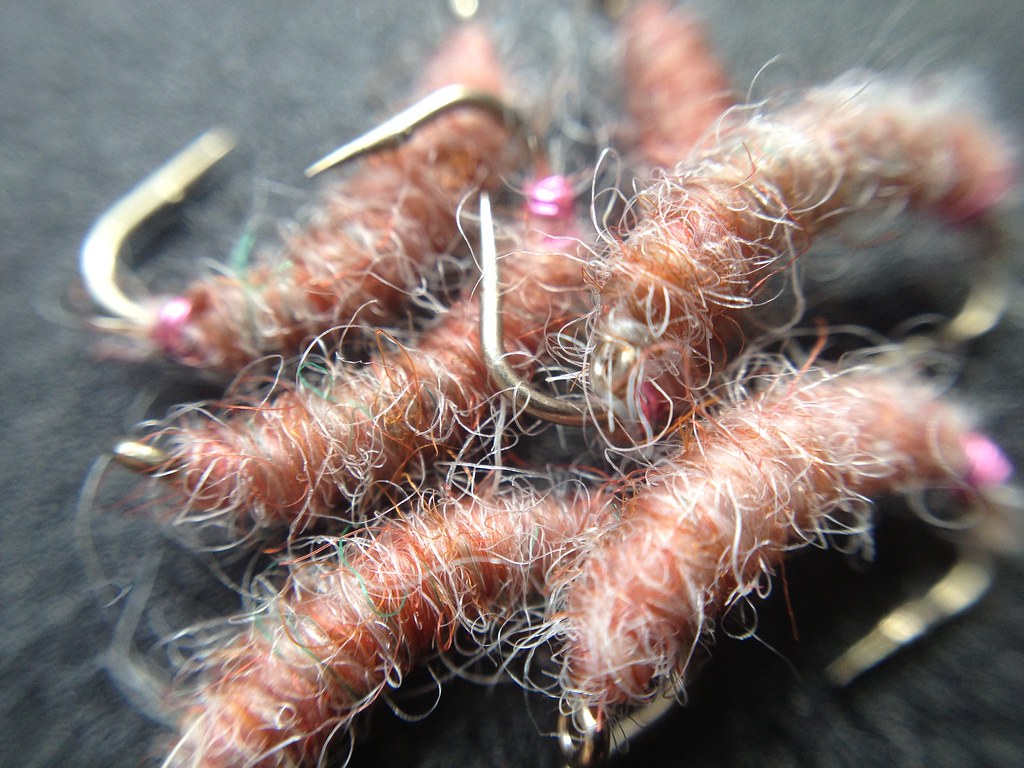 My blog post on Sawyer's killer bug has so far been my most popular.

Another upside of this post is that I received a PM from a chap called Andy on flyforums. He very kindly offered me a metre of 477 yarn along with some other yarns he thought might be useful to me; he only asked for some flies that had featured on this blog in return. How could I refuse. Andy sent me a couple of good lengths of Jamiesons Shetland spindrift yarns in oyster and sand colours, a smidgen of the same yarn in a purple colour and a couple of pieces of different materials to use for making wings. But the biggest surprise was the Chadwicks 477. I was genuinely gob-smacked when I saw how much Andy had sent me, not only was it on a card but there was at least four metres still on it. I just couldn't believe it, I immediately thanked Andy via a PM and told him how grateful I was, it had me grinning like a child. When asked what he would like in return Andy said he particularly liked the klinkhämmers and Adams paraloop emergers, which were sent to him in return.

So now I have some 477 in my possession I can do some comparisons with the yarn I use to substitute it. As you can see from the pictures they visually look very similar; the 454 is in my mind a good alternative.
But it is when the flies are wet that the difference is noticeable; the 477 yarn turns darker when wet, the colour change is amazing. I'm not so sure that a bug tied with Chadwicks 477 would out-fish one tied with a similar coloured yarn though. It is great to have been able to tie some Killer Bugs with the genuine coloured yarn, but I'm more than happy with my cheap sub.