For those who are on Facebook but weren't yet aware I set up a Facebook page just before the season started, it allowed me to post quick snippets and pictures where a full blog wasn't necessary.

Please take the time to follow the link inpursuitofspotties and like my page to see the latest news of my fishing escapades. 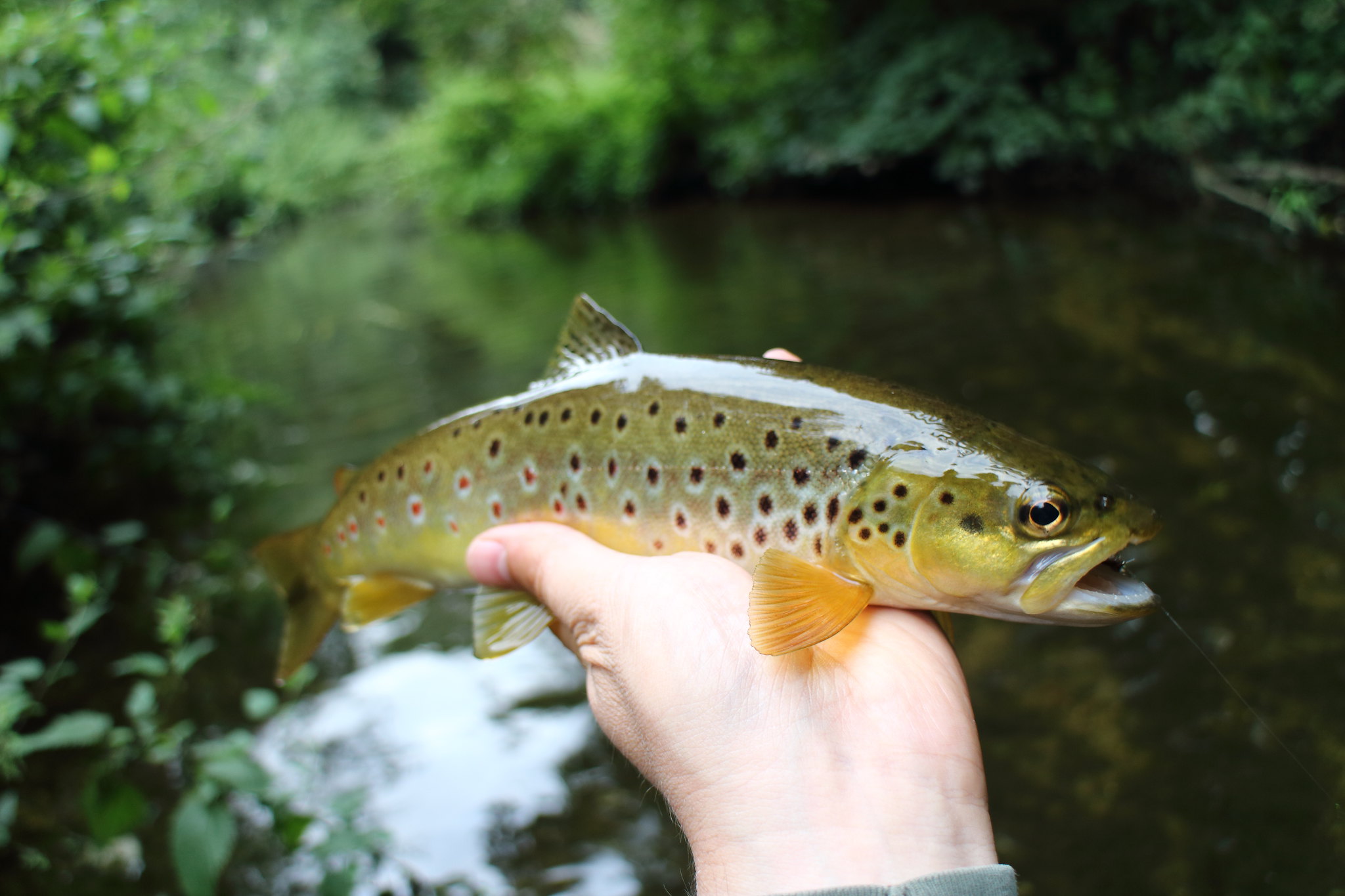 Urban Bonanza And A Strange Evening


Another lunchtime finish on Friday - I think I've only fished once in the morning before work so far this season. Tom was working at home and would be joining me later on, I had already planned my afternoon and knew where I wanted to fish.

There is a section on the urban river I fish that remains relatively untouched, this is because it is penetrable; concrete banks encased by a canopy of tree branches and a barricade of brambles at the top of the banks, means it cannot be fished from the bank. During the early part of the season you can see a good number of fish before the leaves obscure the view so there ought to be fish around. Fishing here also gave me an excuse to use my much favoured six foot rod, that said side casting would still be the order of the day.

Walking downstream to just beyond the trees I spotted a rather nice grayling, at least for this part of the river. Easing into the river above the fish; obstructions meant a traditional upstream approach was impossible. Standing in the edge of the river I quietly set up while allowing my surroundings to settle.

Ahead of me and across the far side a fish rose directly above a small bush that hung over the river's surface. Unable to refuse a rising fish I tied on a quill bodied cdc shuttlecock, a small trout threw itself on to the hook. The rises stopped after that, but I guess a fish is a fish. 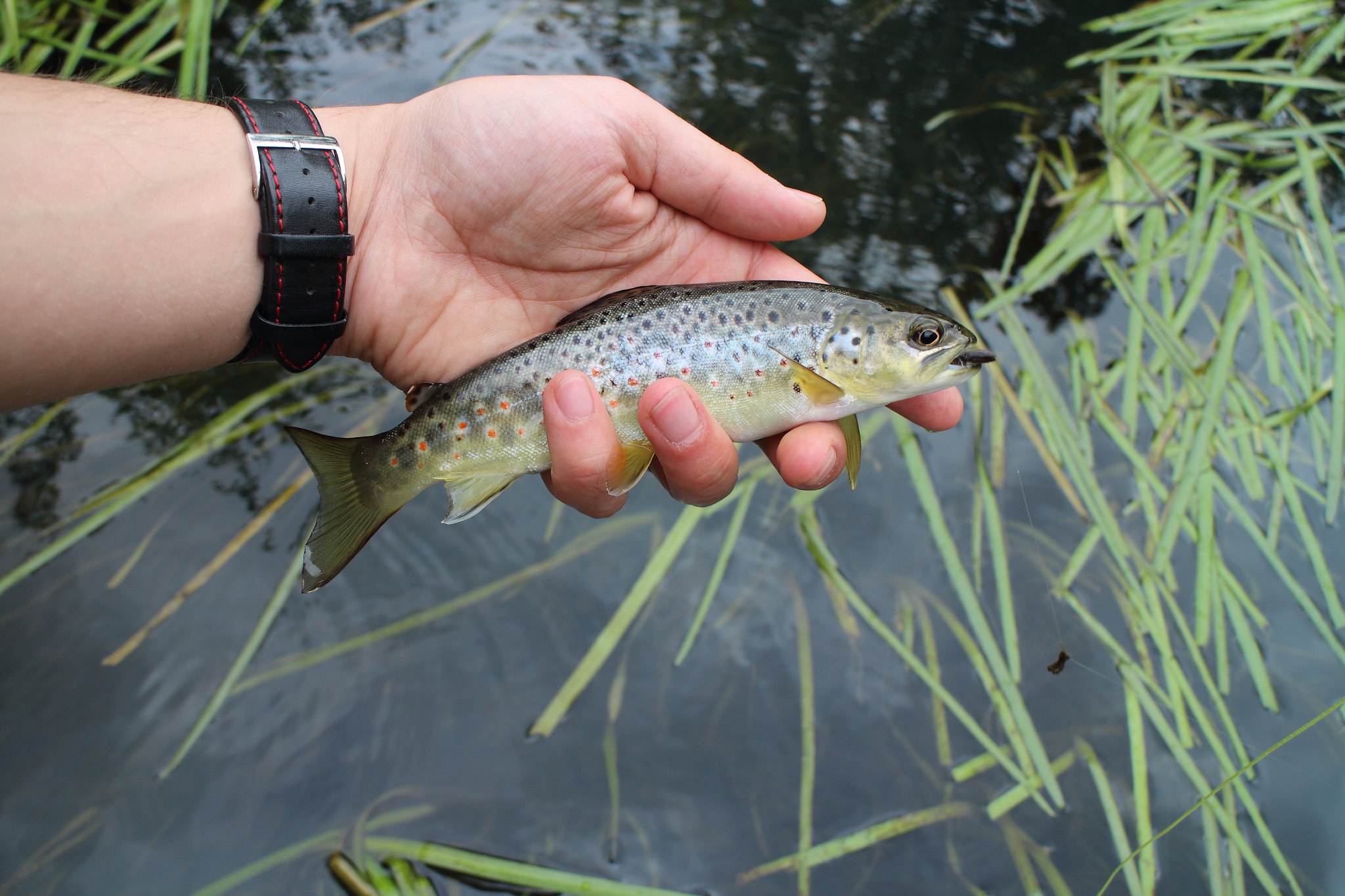 Turning around and moving downstream a little I took the shuttlecock off and replaced it with a Utah Killer Bug, I find this a devastating pattern for grayling all year round. First cast landed the fly upstream and to the side, I watched as the grayling drifted side-wards and engulfed the fly. A firm lift gave way to the sinuous gyrating fight so typical of grayling; held in my hand it was a pristine male fish of about thirteen inches, defiantly holding its dorsal up, a great start. 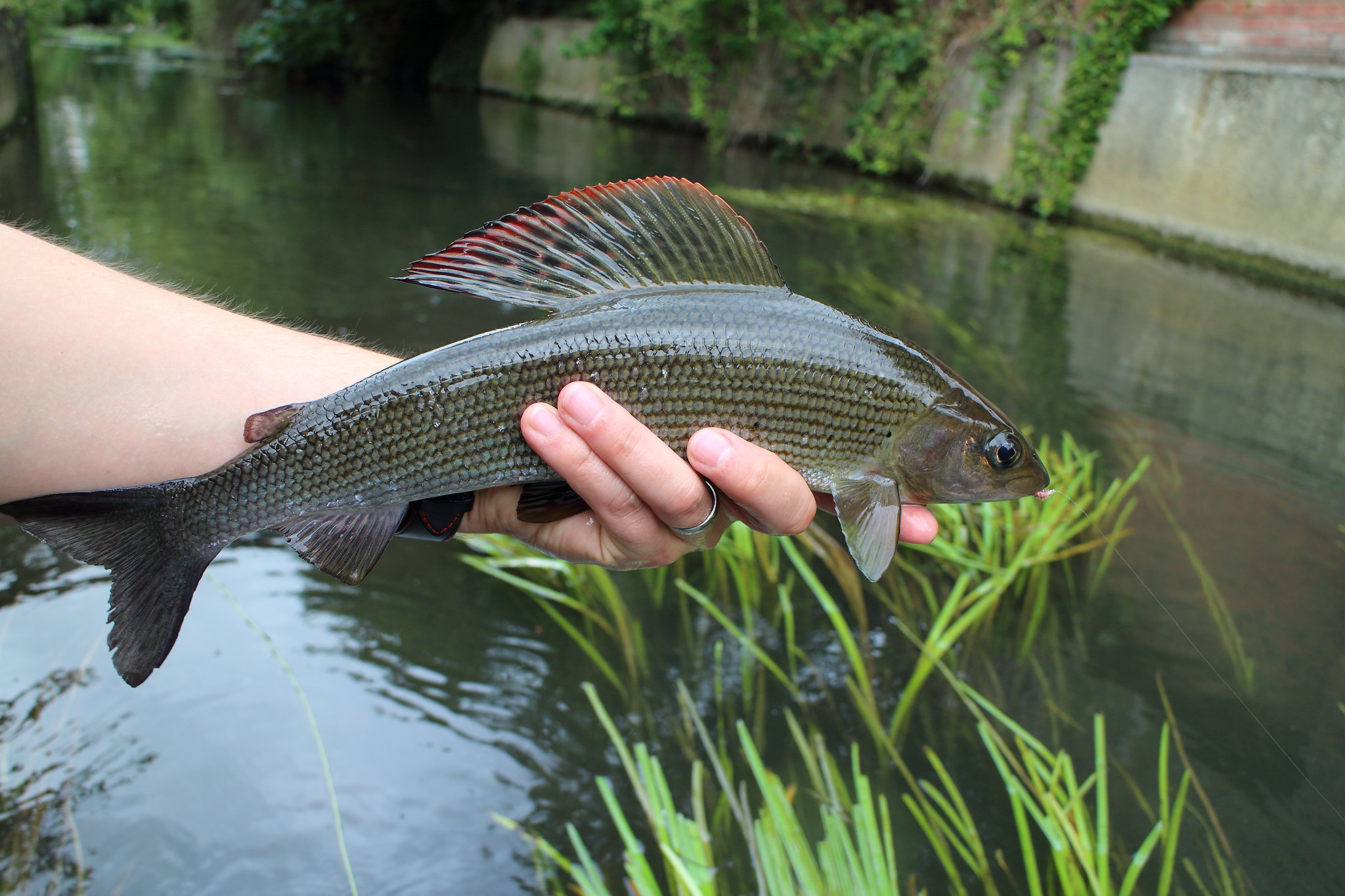 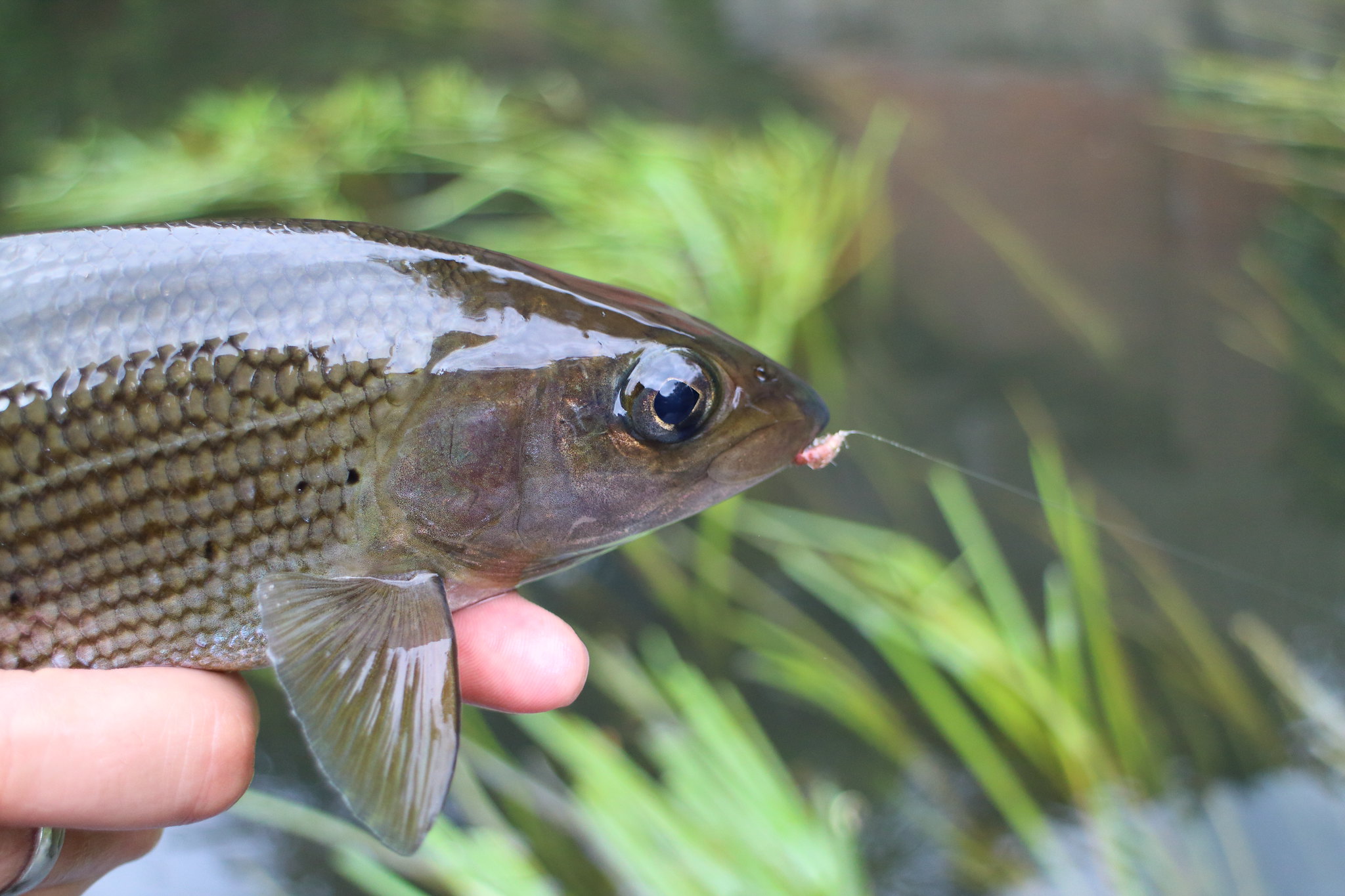 Climbing back out of the river a very short walk took me to the beginning of my intended spot, a cautious clamber down a four foot concrete bank started things off. I spooked a couple of very small trout that kindly shot downstream as I waded slowly over to the left bank. Ahead of me a branch thick with leaves blocked my view, using it to my advantage I stalked forward using it as a screen. As I stood behind the branch I could see two fish a couple of yards in front. With the UKB still tied on I executed possibly one of the shortest bow and arrow casts ever, a small grayling intercepted the fly as it drifted towards me. Pulling the fish downstream quickly and releasing it allowed me to repeat the proceedure, landing another small trout. 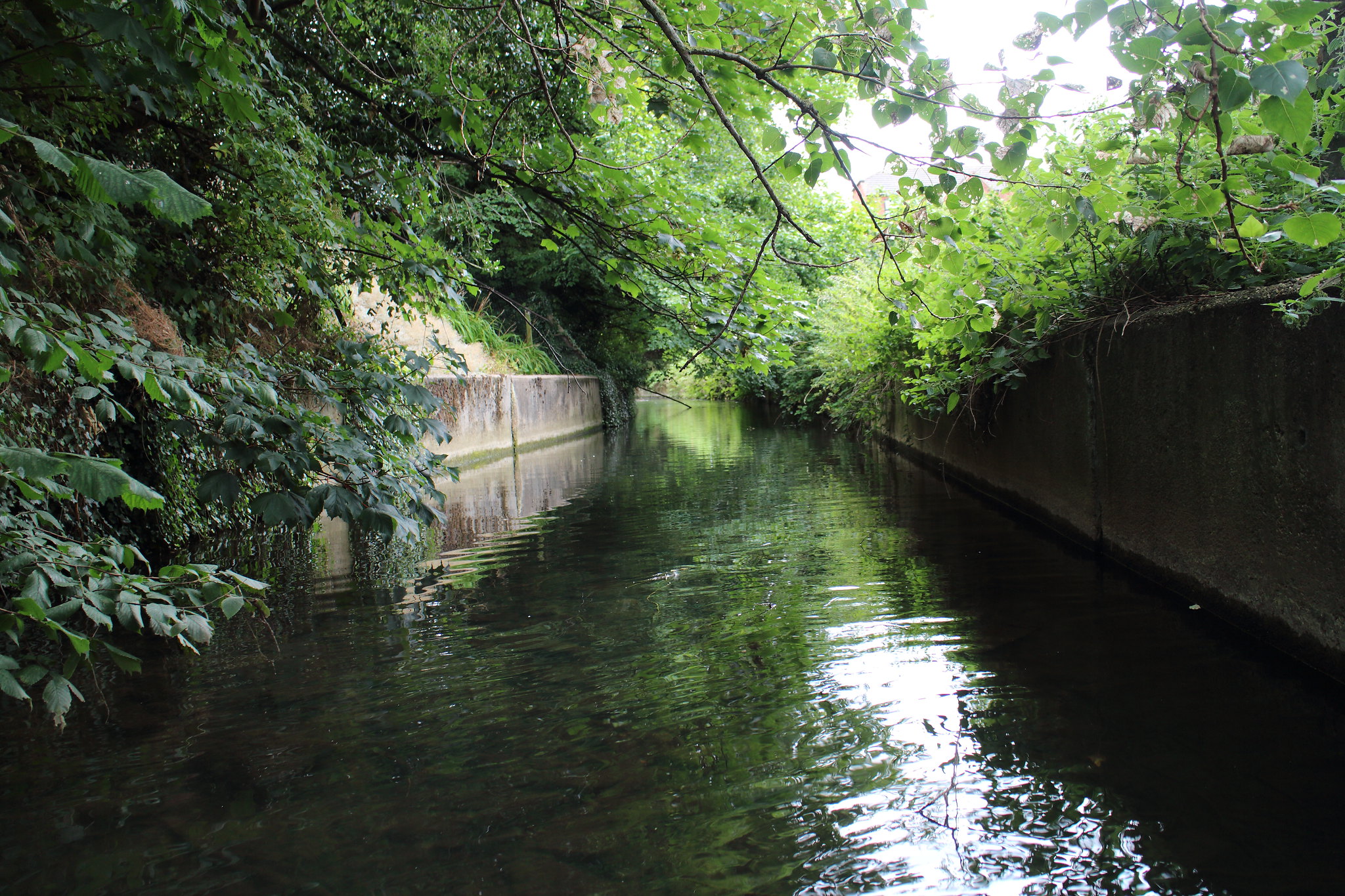 Unable to see clearly in to the water ahead of me to took off the UKB and tied in a size 16 All Purpose Terrestrial, with all the cover any fish ahead of me should be used to small things dropping in the surface. Wading slowly up produced a few more trout with many more spooked, the low slow flows not helping things, perhaps I'd be better visiting earlier in the season, normally the river here moves along briskly.

At the very top a small weir forms a convenient boundary, it is often quite productive but again the low flows and excessive weed made the pool virtually inhabited except for a plump ten inch fish which was the biggest trout from the urban river. 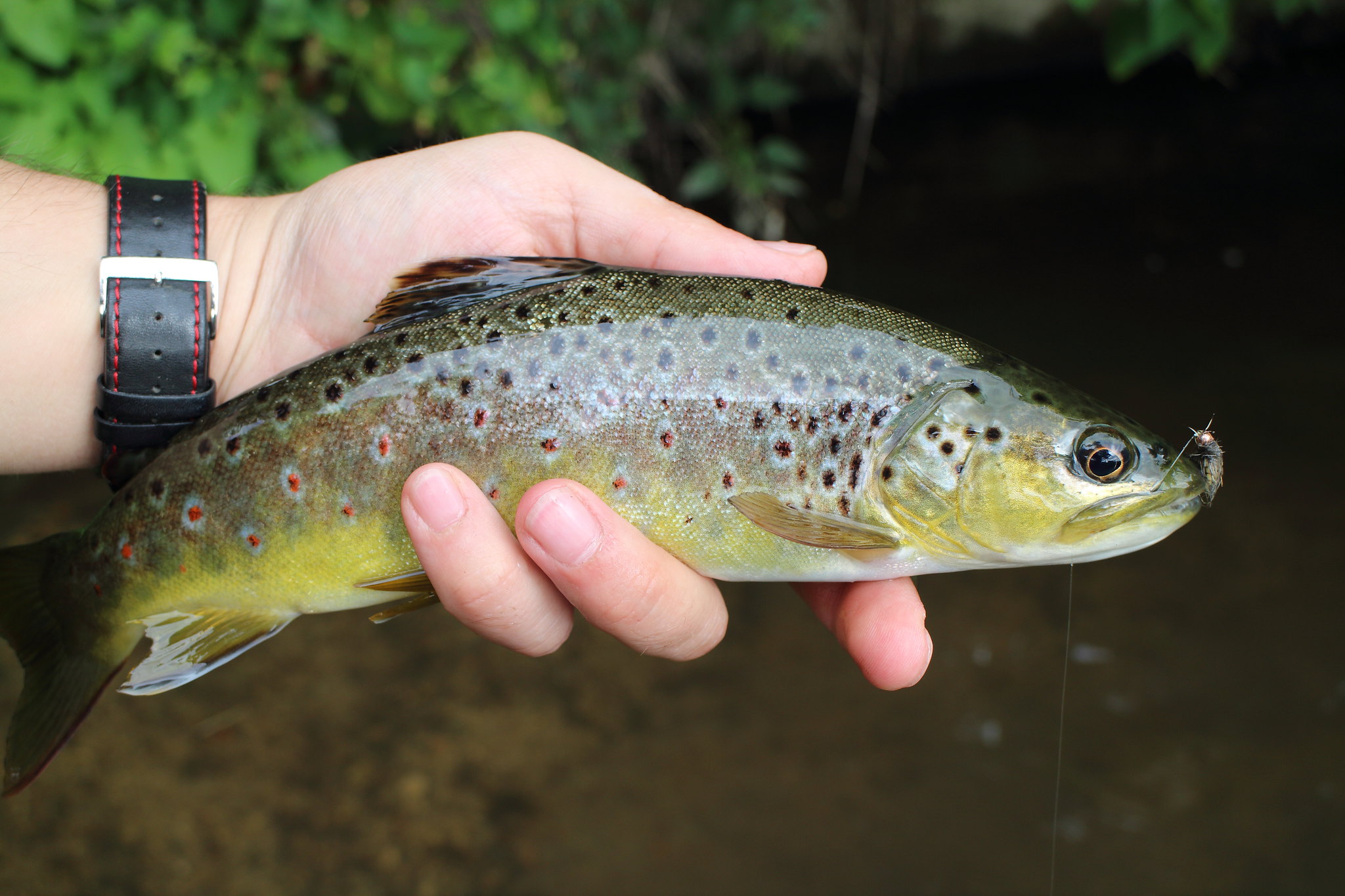 I moved upstream to another weir, this one generally being very productive. As I reached the pool I could see a small group of roach holding station in quite a flow over gravel in shallow water. It was one of these that I caught first, not big but absolutely perfect. Then followed a succession of small trout and another good-sized grayling that disappeared before I could take a picture. As I left the pool my tally was thirteen trout, three grayling and a roach, superb sport. 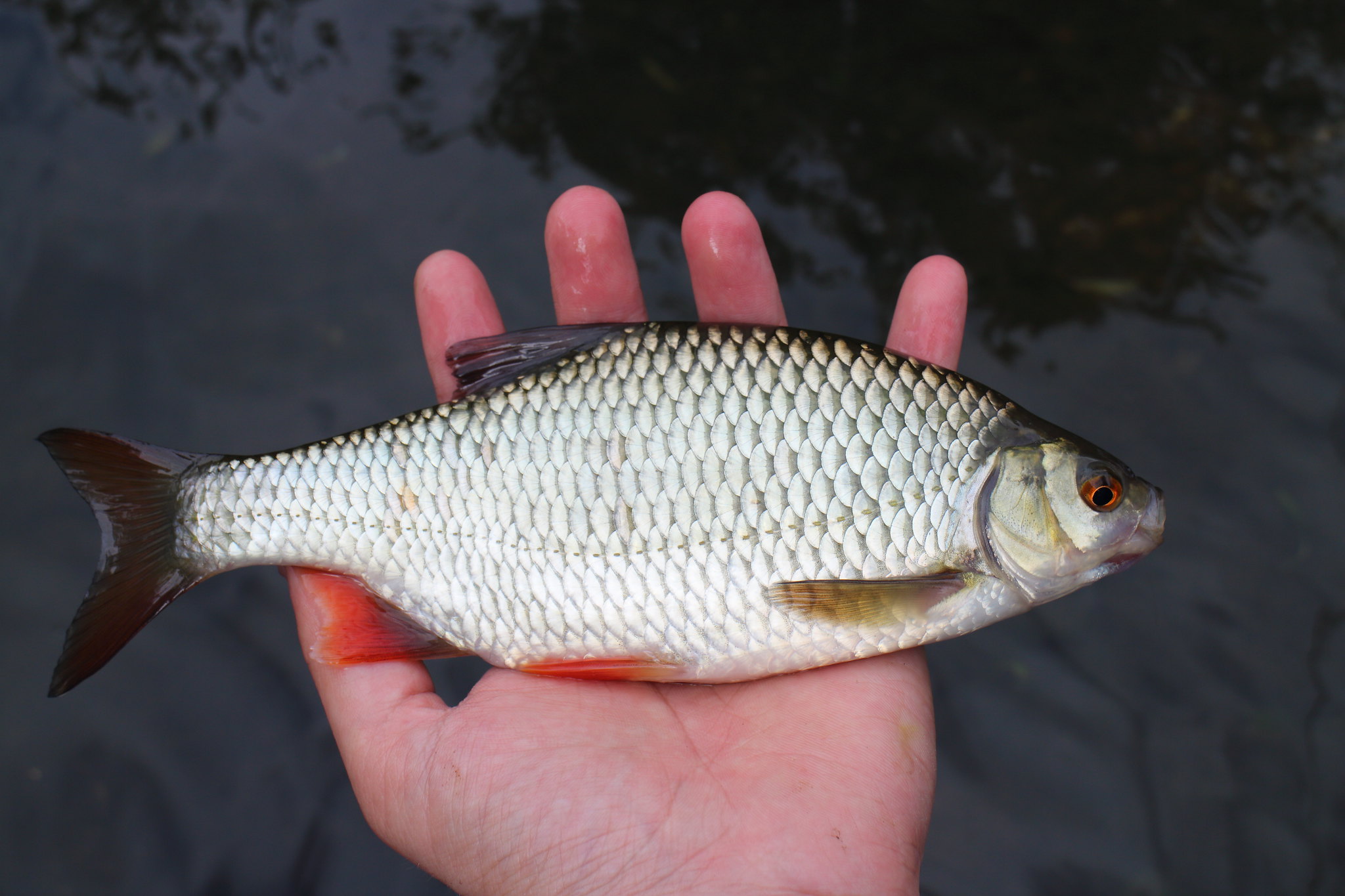 Walking back towards the car a spotted a couple of large trout milling about in an over-wide, slow section of river. Keeping low on he high bank I was crafty enough to get the klink and dink out near one of them, as the JP Pupa slowly sank I watched as the fish swam and sucked in the fly. Despite my fly line hanging over a thin branch it didn't impede in the strike, though maybe it did as the fly fell out after a few seconds, I was pretty gutted really that fish was easy over two pounds, oh well I don't win them all.

By this point it was time for me to meet Tom, after a fifteen minute drive I arrived at our bottom-most fly beat; I waited a while before Tom showed up. We walked the end of the beat, I had changed rods, taking my Lexa with me and intending to set up a french leader, Tom had his 8' four weight and opted to fish dries, we agreed to use which ever rod suited the particular bit of water we were fishing.

After faffing around looking at the very bottom end of the beat we settled on a short glide below a pool on a sharp bend. We saw many small dark caddis fluttering in little swarms, Tom tied on a dark deer hair winged caddis with a hares ear body. After many casts and a couple of missed rises, Tom caught a grayling, a great start for him. I fished a lot of water before I too finally caught a grayling using the French leader, another followed; although we had seen trout, so far there was not a sniff from one. 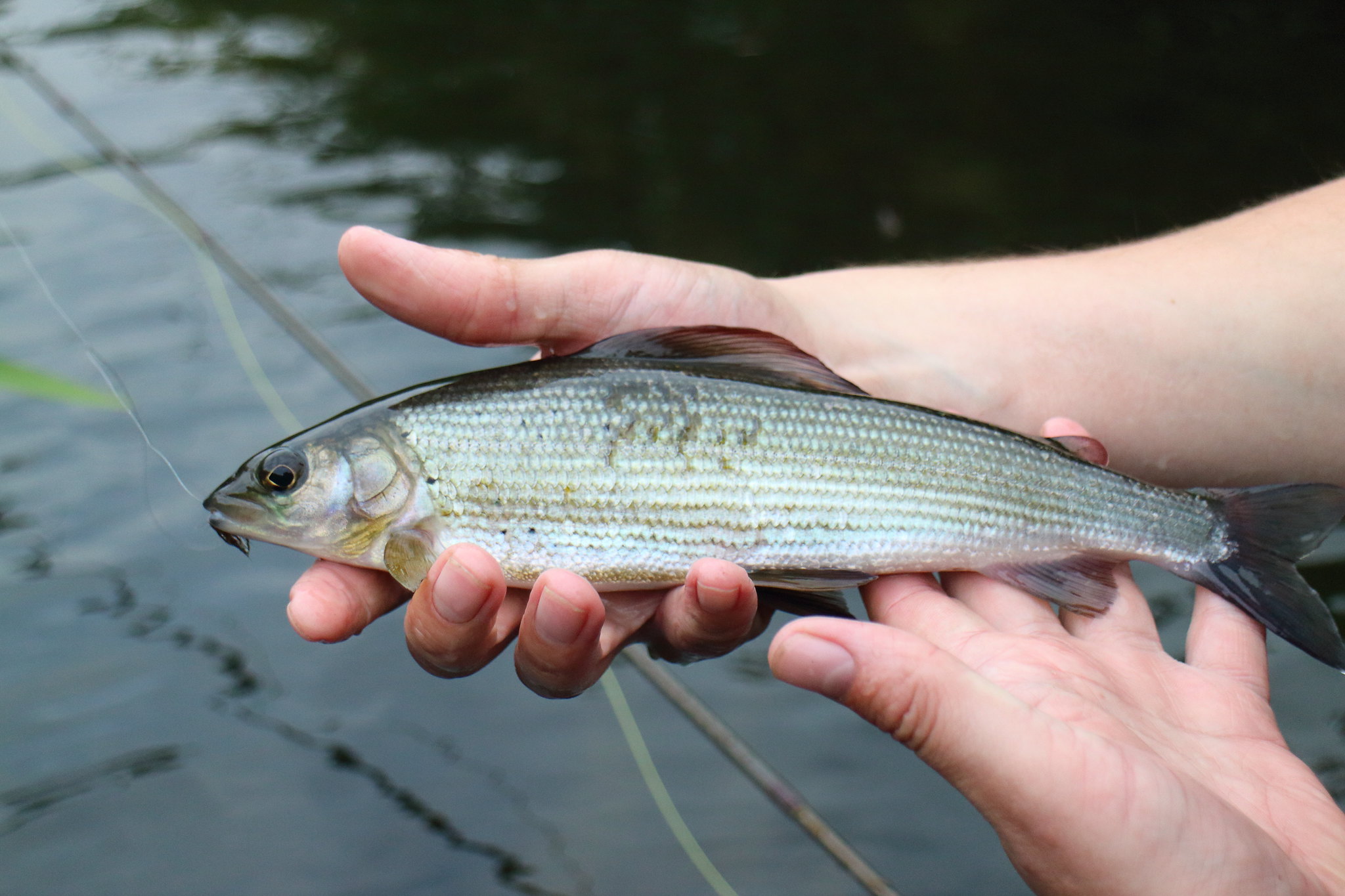 It wasn't until we fished a deep pool did we see the only trout of the evening. Tom had fished first without success and I persevered eventually being rewarded. Using the French leader again I changed the point fly to a 3mm tungsten bead JP Pupa, the pool being particularly deep. Although the fish wasn't huge at sixteen inches it was very welcome and provided a great scrap on the three weight Lexa. 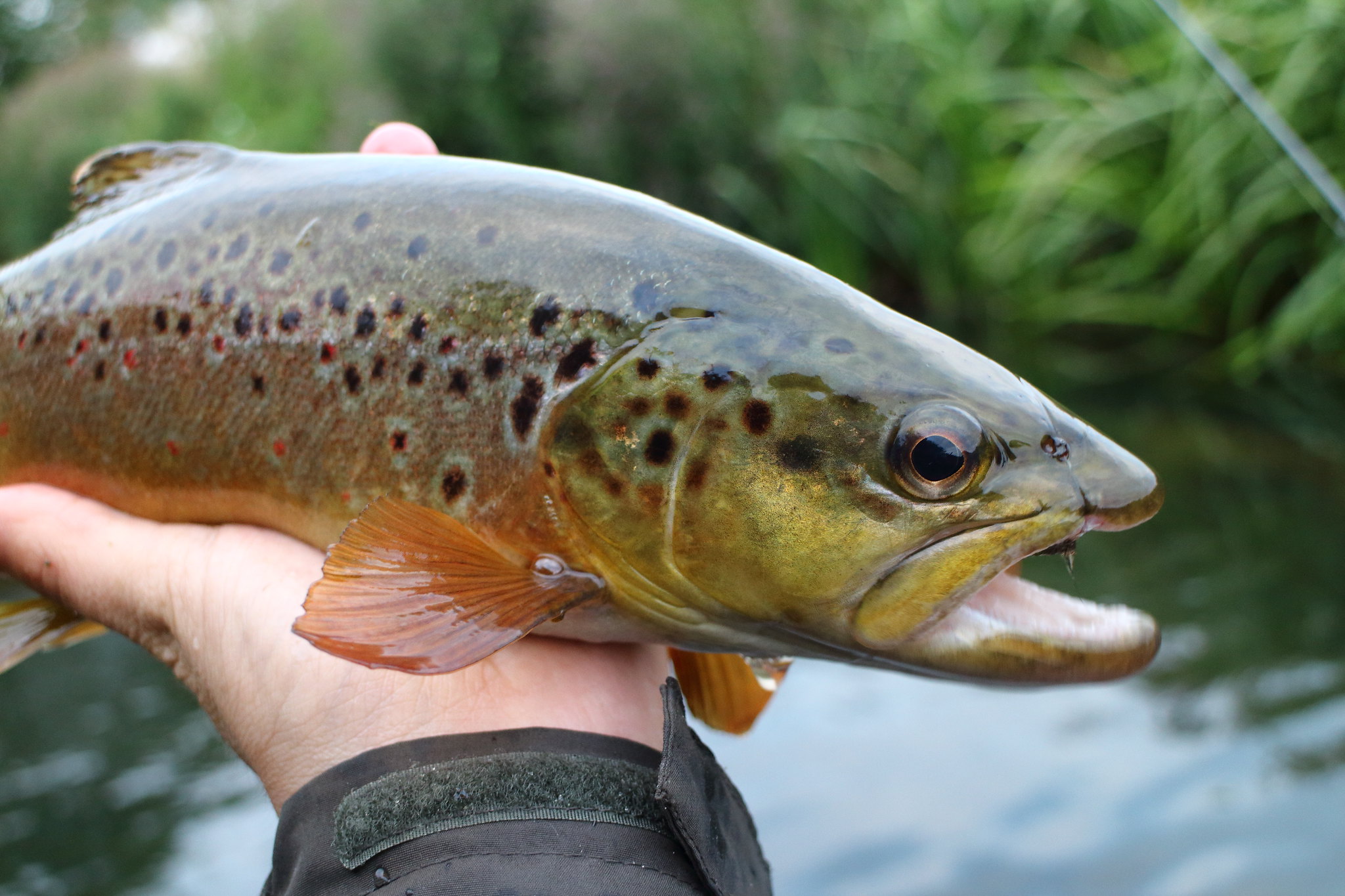 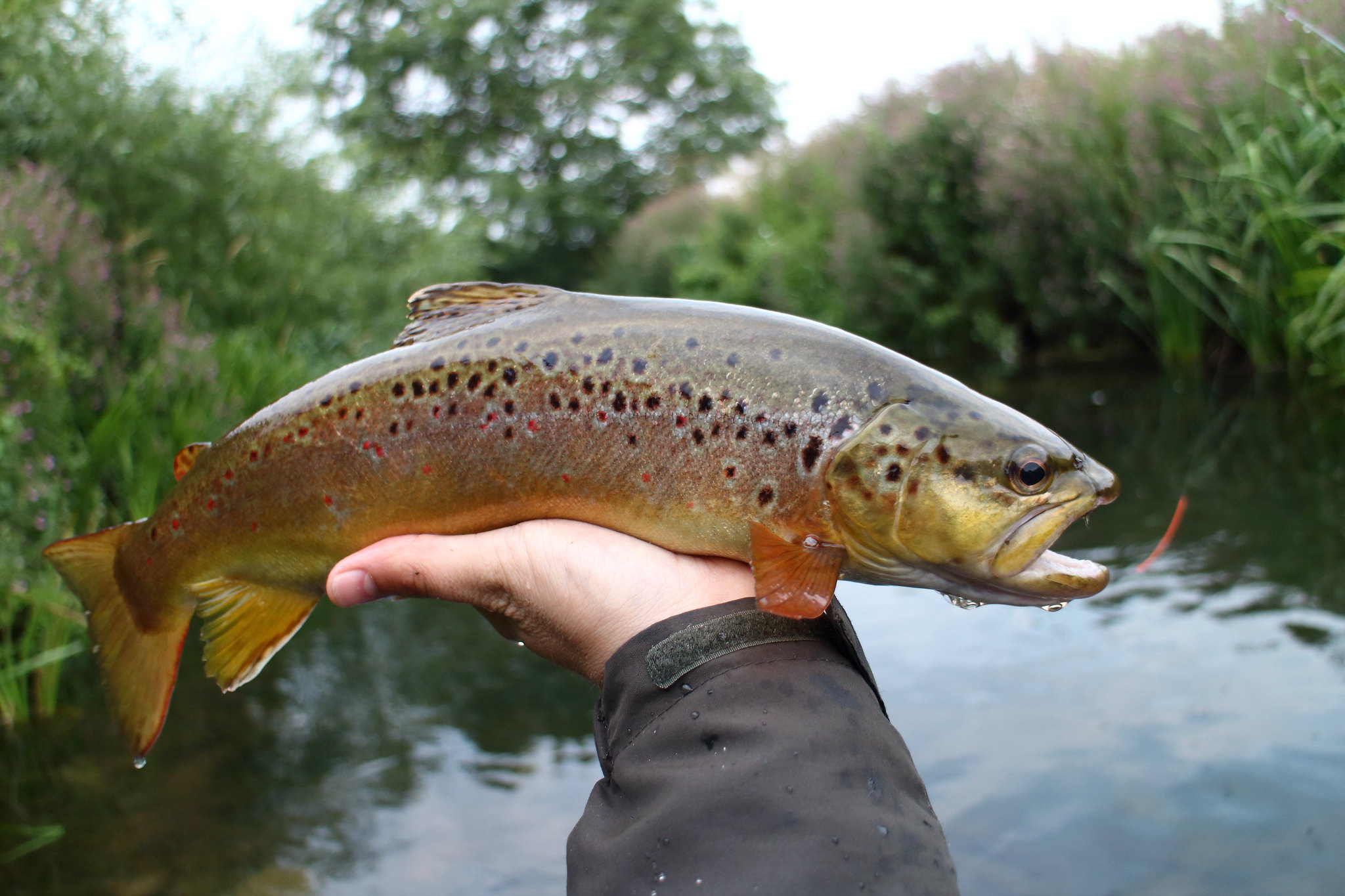 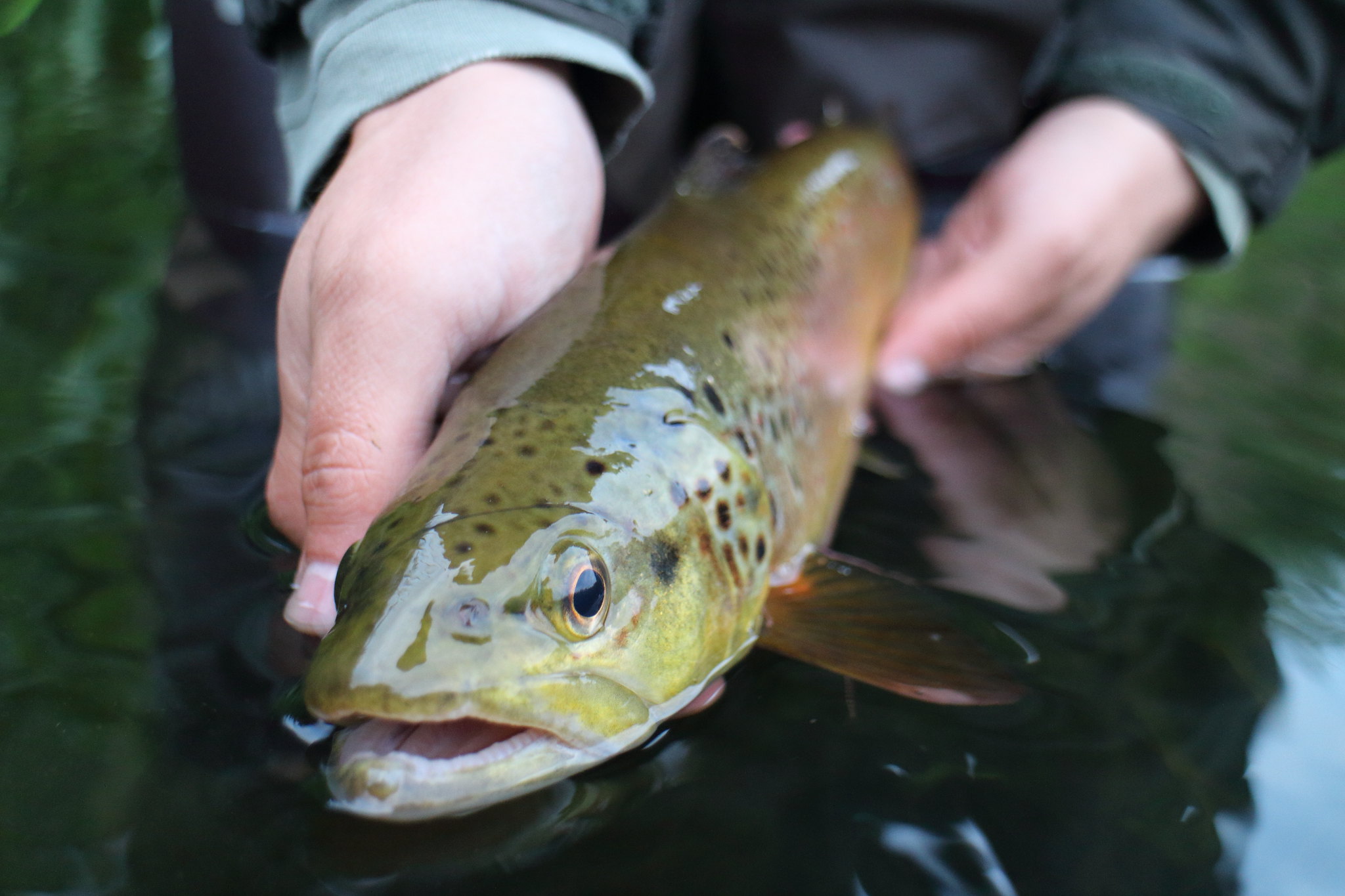 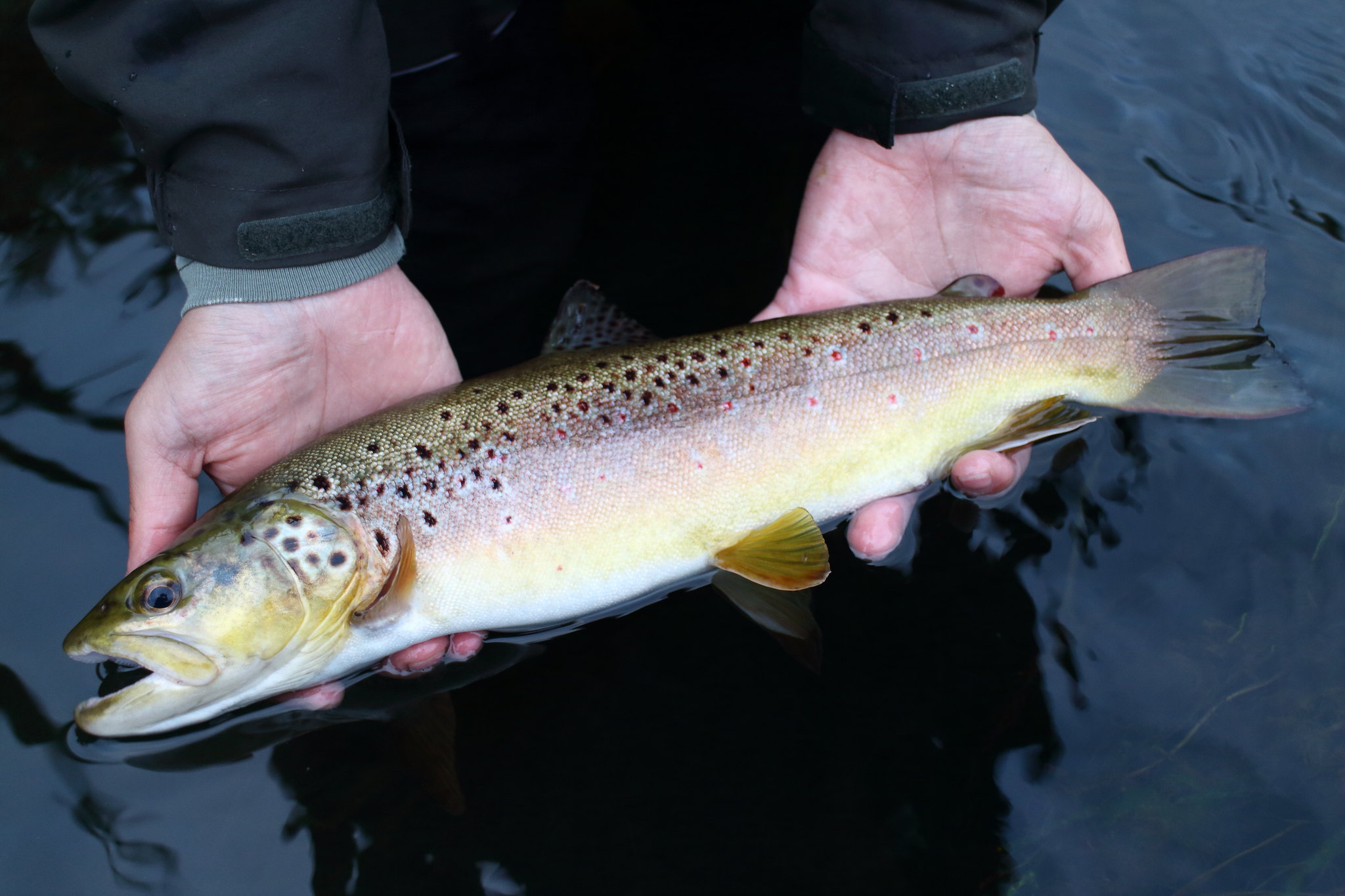 More than satisfied we skirted a lot of river, most sections are bank to bank weed and low flows meant a lot of water was devoid of fish. Arriving at another deep pool, we could see many fish ahead of us against the light sandy bottom. This pool is quite long in comparison to most on the river, what I'd consider a proper pool in the traditional sense, though it doesn't have a shallow tail. The grayling frustrated Tom, the trout were still conspicuous in their absence but he did manage a couple more grayling. After unsuccessfully trying the head of the pool a large trout shot past as we waded through, really should have put more effort it.

By now it was getting dark, we tried a pool that has fished well previously, last time I fished there, there was a cracking medium olive hatch. With the river so low and lacking flow the dynamics of the pool had changed, either way nothing moved and we walked up on to the riffle above. Ahead of this was a long stretch of generally uniform channel and flow. The light had almost gone, Tom and I have been talking about glow in the dark flies, a la Glen Pointon. Tom was the first to experiment, a glow in the dark post klinkhamer the first offering. More just to see what the fly looked like on the water Tom had half a dozen casts in the smooth water ahead of us. One drift was quietly interrupted by a tiny rise in the middle of the river, Tom lifted in to the fish and we were both left in shock as the rod jagged ferociously, the line parted quickly, the only evidence that remained was a boil in the surface that faded as it drifted down in the current. That concluded the end of our evening, on the walk back to the car we couldn't help but talk of that fish and the comparative absence of trout, a rather strange evening.
Posted by Ben Lupton at 22:22 No comments: