Yesterday I told of a large fish that snapped my line, I caught a glimpse of the fish and it left an imprint on my memory and I vowed I would return. Today was about unfinished business. It took me a while to actually decide where I was going to fish, almost spoiled for choice really. As I had such a good day yesterday I felt I had to start where I finished and intended to start further upstream, but couldn't resist having another go at the monster.

I quietly eased into the river below the main pool and sat on the bank taking my time to set up. Although my main target was the large trout I hoped to open the days account in the pool above me. As the duo had proved successful yesterday I rigged up the same again, size 10 Adams klinkhamer and size 12 JP Pupa with a 2.8mm copper bead; I also used the same outfit as yesterday as I enjoyed using the six footer that much.

After a couple of casts I hooked a good fish in the main pool, despite putting quite a bit of pressure on, it acted as though it wasn't aware it was hooked and was quickly brought to the net; at 15" it was a great start to the day. As the fish stayed at the bottom end of pool I was hopeful of another trout but nothing else materialised. 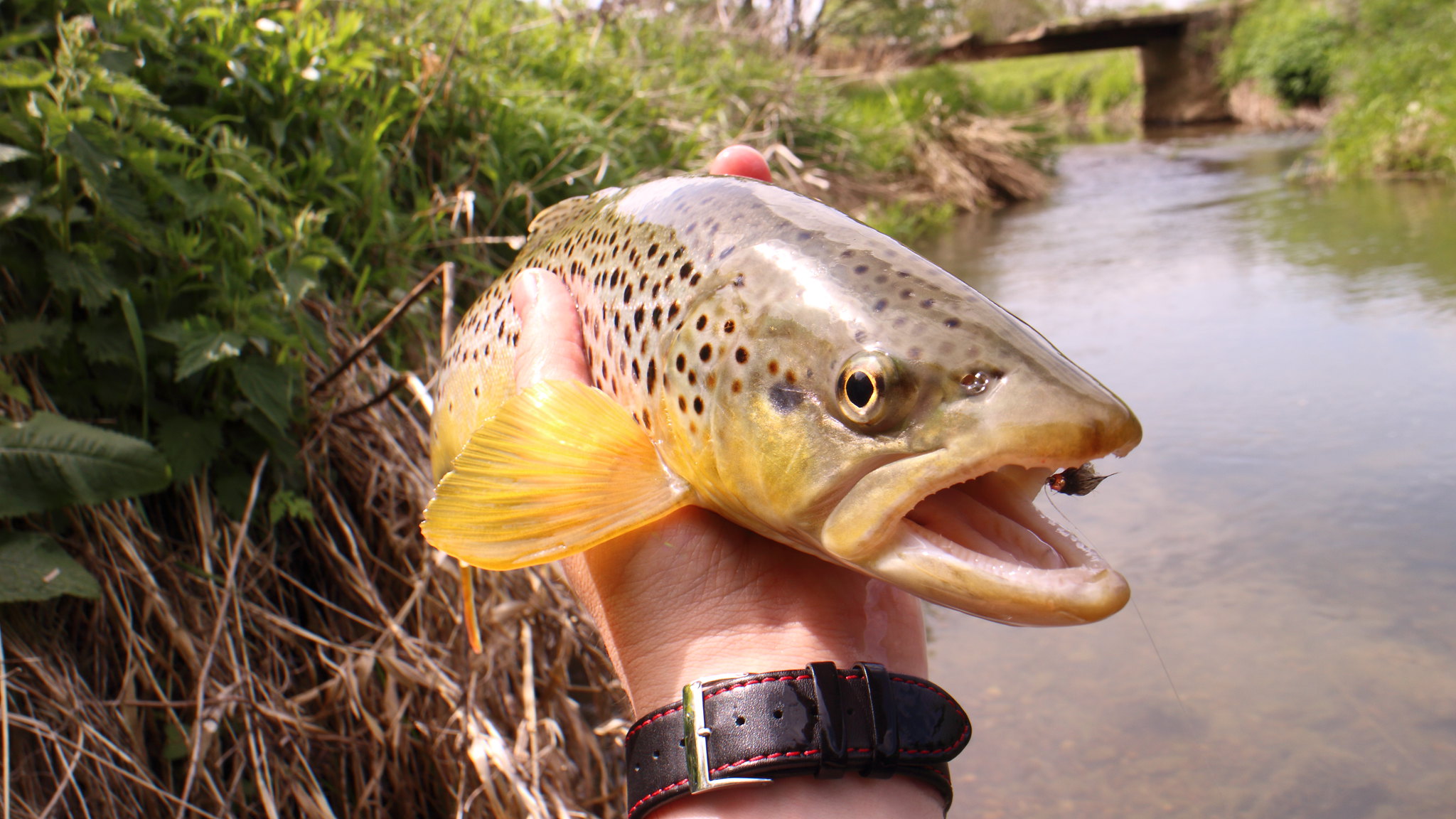 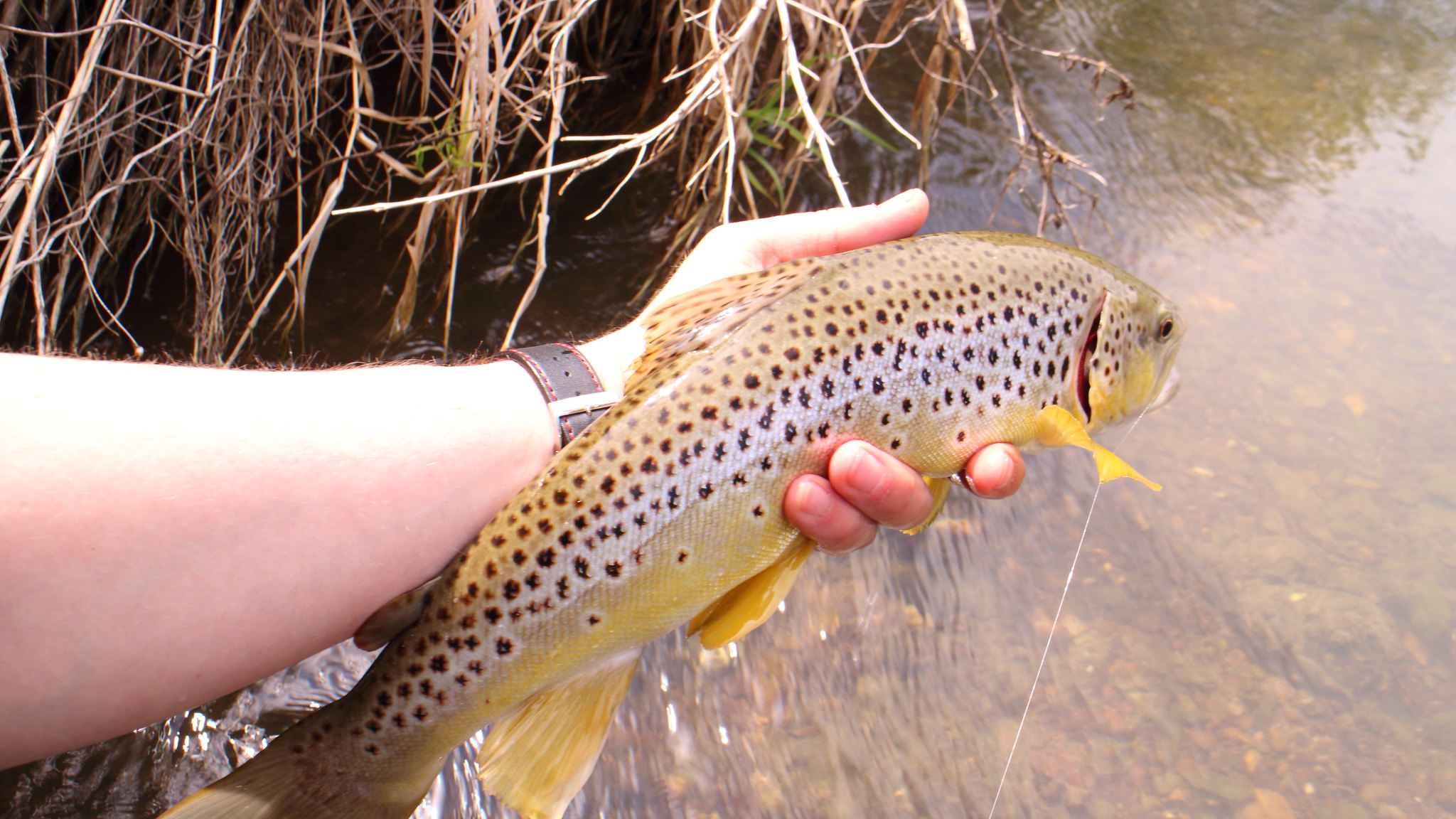 With the pool out of the way I could concentrate on the horse's lair. Same as yesterday, I cast above the undercut in the fast water and allowed the current to sweep the flies into the hole. The fish showed itself as it darted out to intercept the fly. I went through several fly changes as well as giving the fish time to rest; I tried a hydropsyche, a gammarus and a woolly bugger with out success. The main issue I was having was that the flies weren't being drawn under the over-hanging vegetation, I then tried a caddis green JP Pupa.

After a few casts a sixth sense told me to lift, the line gave no indication but I found myself attached to a fish. Within a few seconds the fish realised it had been hooked and started to charge around trying to get in the undercut, as its plan failed it shot past me into the pool below. After jumping many times I started to gain control - I really wish I had a picture of the little rod hooped over. The fish was powerful and stayed deep throughout the fight, it was a relief to get the fish in the net. Bright sunshine bathed its butter yellow body, much brighter coloured than other fish I've caught from this river. I had my scales in my bag since I caught the 6lb'er, this fish measured 17" and weighed 2lb 6oz, my day was made. 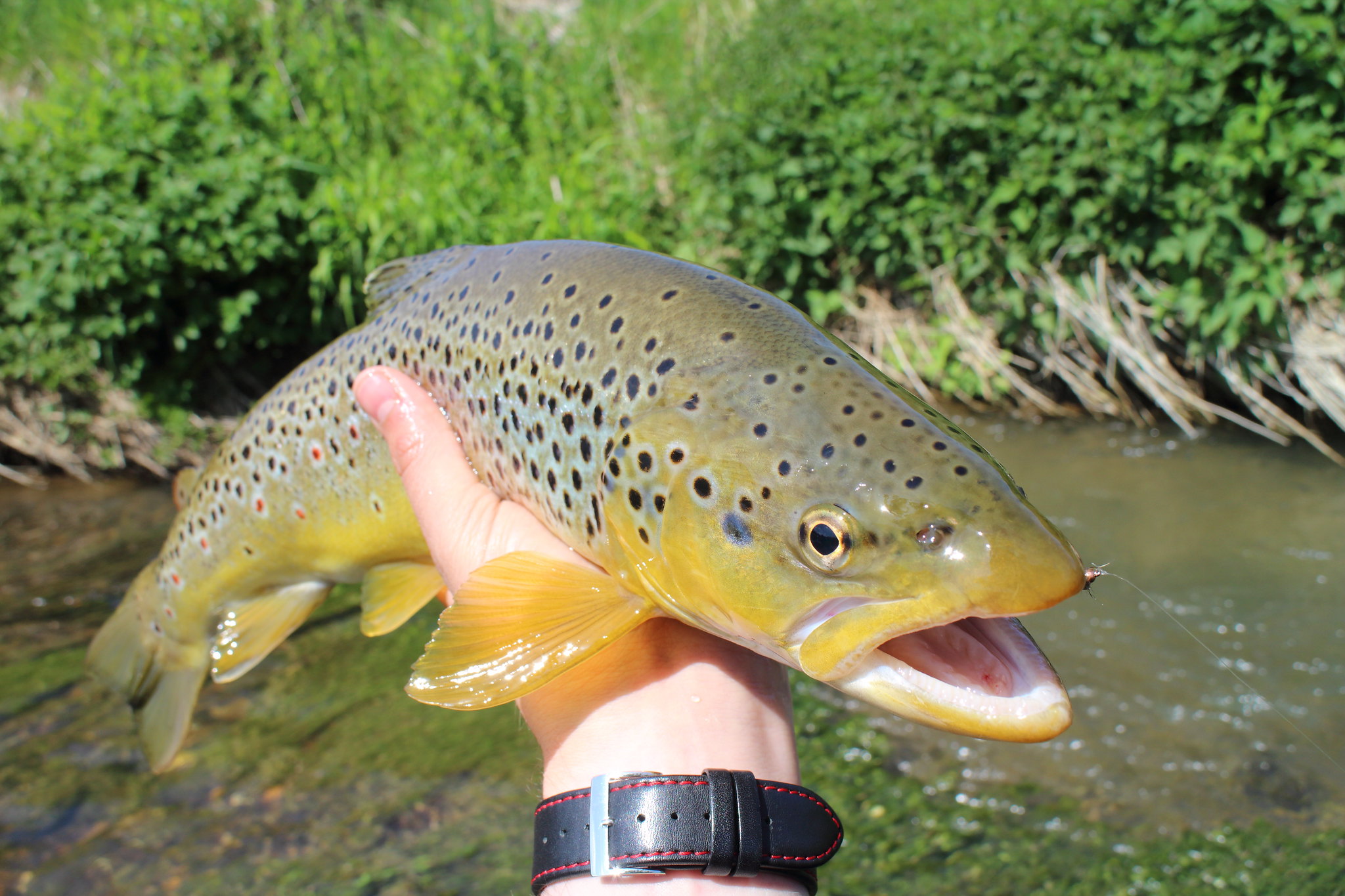 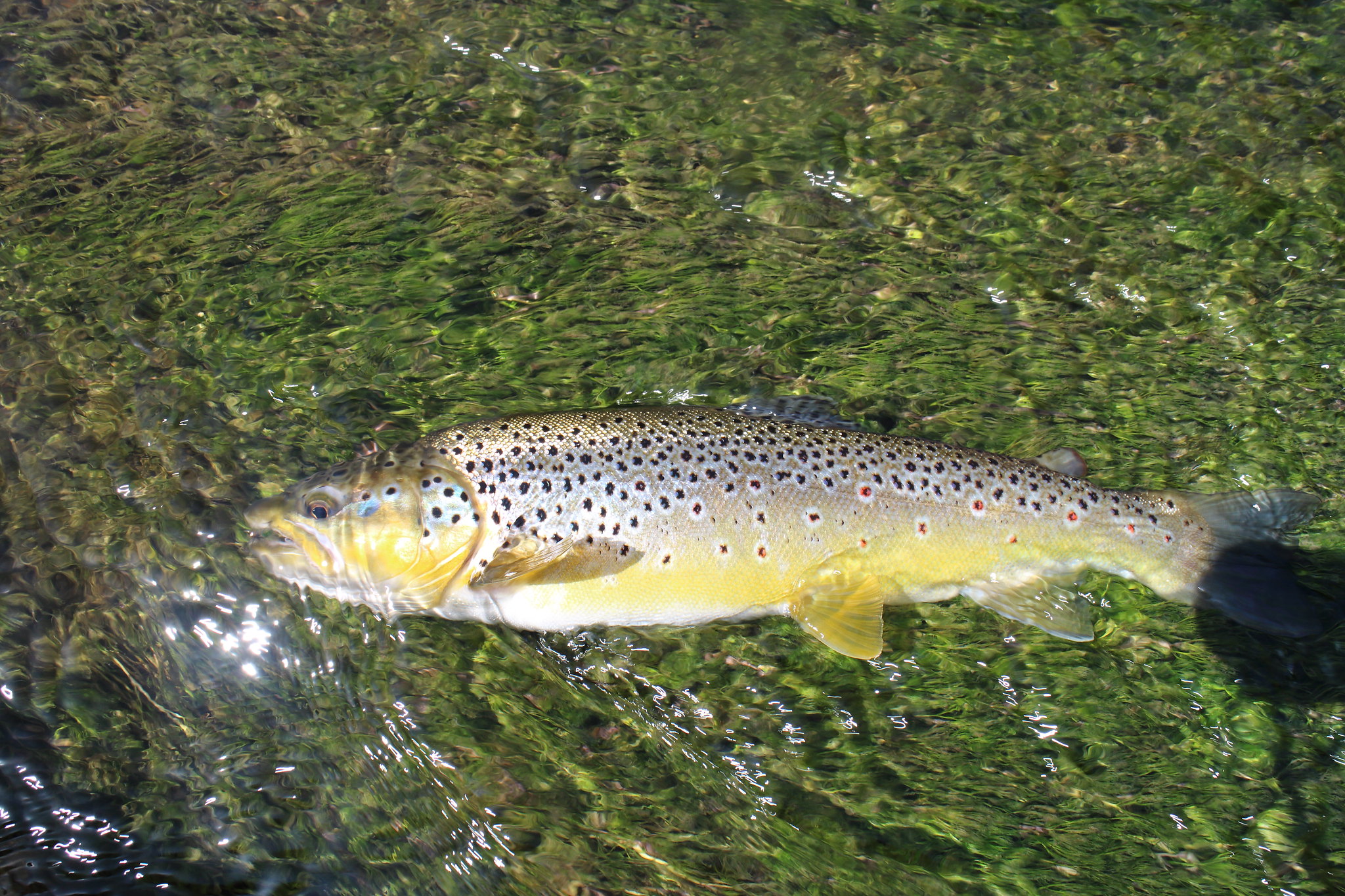 I walked upstream feeling very pleased, there's nothing to beat the feeling of catching a targeted big trout. Walking up to the point where I came across the hatch of olives, I dropped in the river and was greeted by a rise ahead. With nothing particular hatching but the occasional fish rising I tied on a size 14 DHE, I really rave the fly since I started using it last year, it pulls fish up from nowhere; hats off to Bob Wyatt.

I progressed up the river catching several fish including one of 16", all on dries. The weather was complete contrast to yesterday with bright sunshine eventually turning the fish off as I spent the last half an hour not stirring a fin despite changing flies and methods. I'm starting to fall in love with this little river and there's still more to explore. 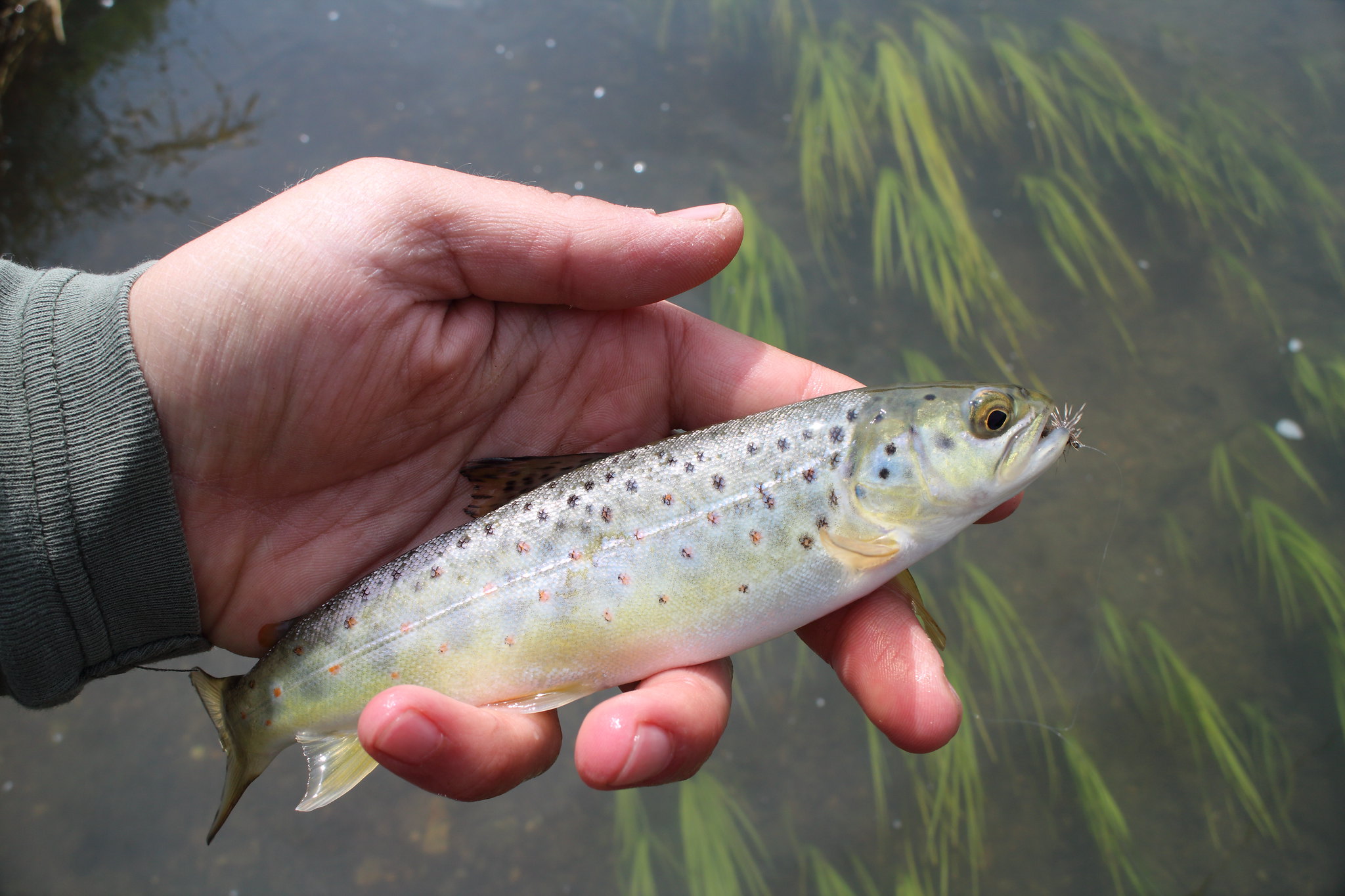 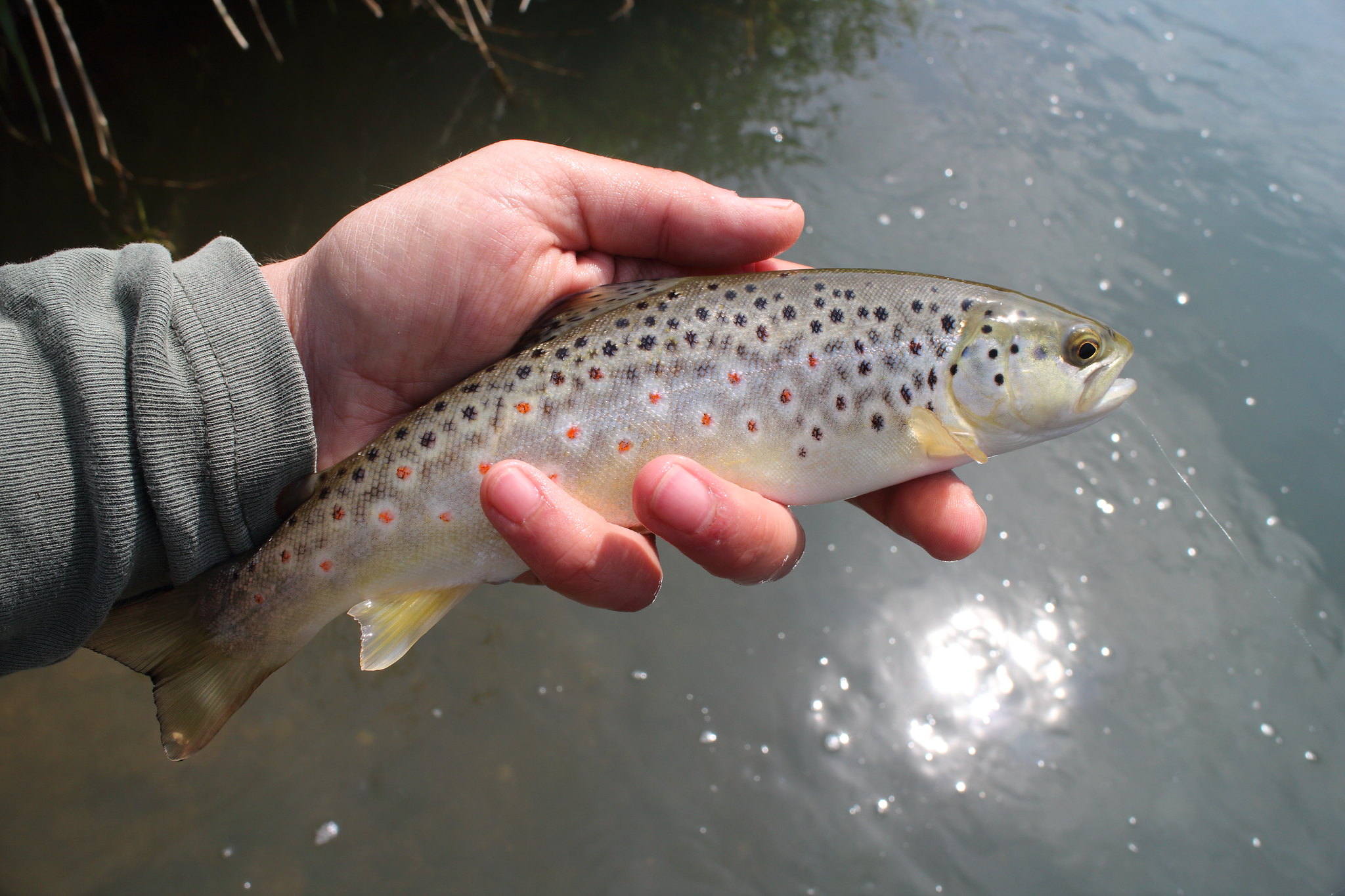 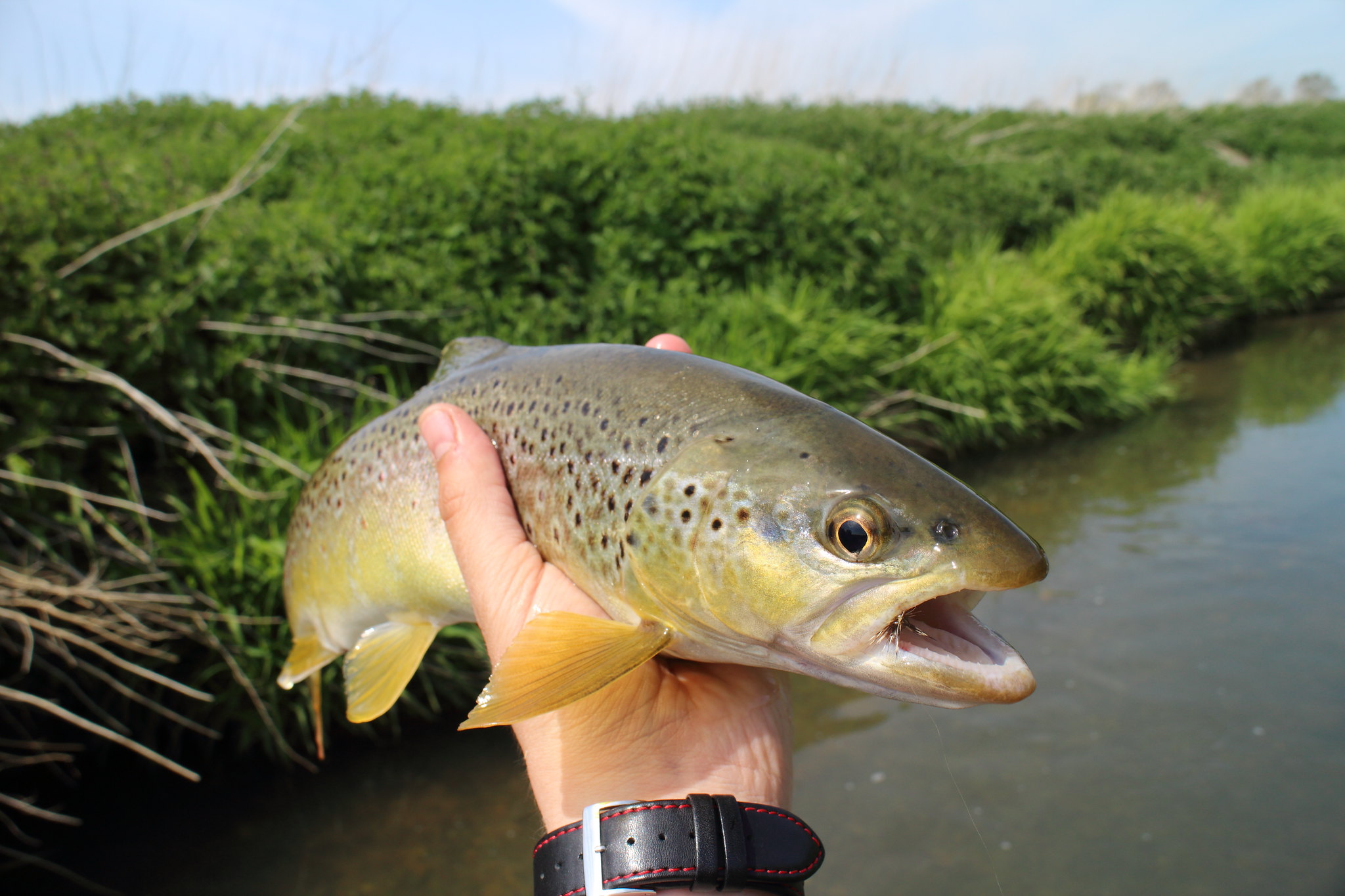