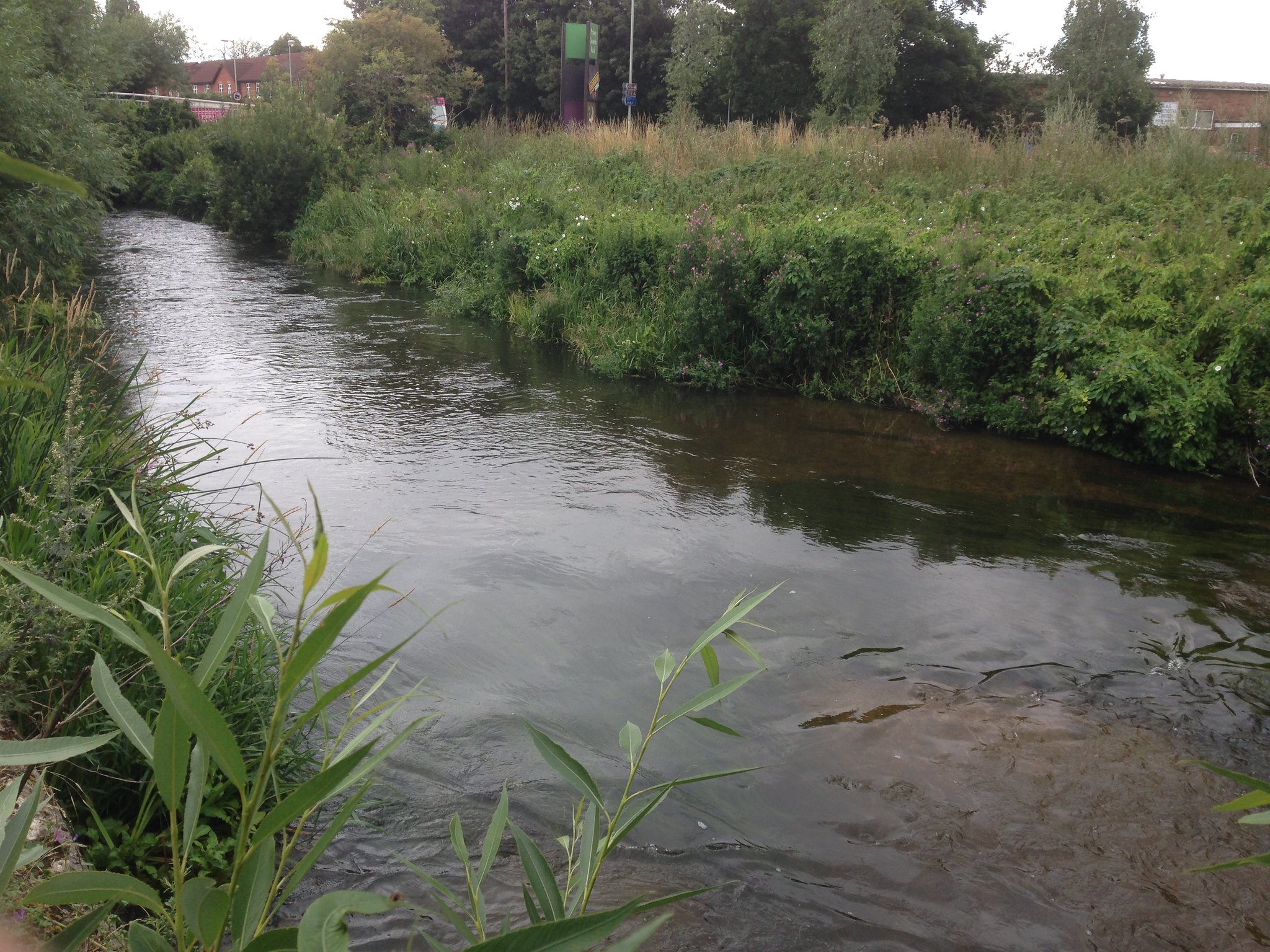 A planned trip to Bedford to fish a section of the River Great Ouse called the New Cut didn't quite go to plan. Having fished here in the past and caught a wide range of coarse species I have always used bait, I really wanted to use a fly and from what I remembered of the river French leader techniques would work well. Arriving with fevered expectation I crossed a bridge and was greeted by a strong clear flow; the river looked in fantastic condition, the gravel sparkling, the ranunculas bright green and swaying. 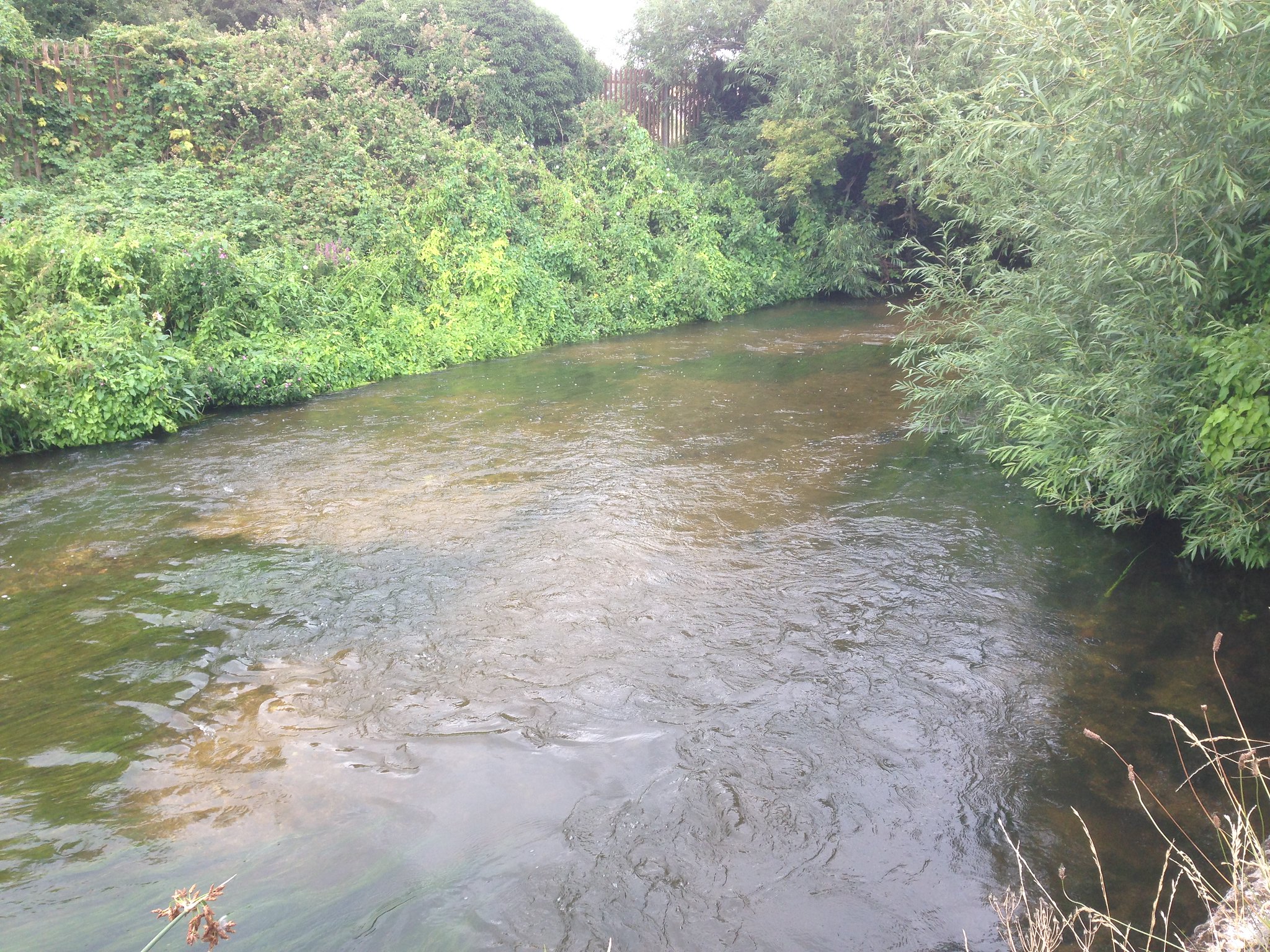 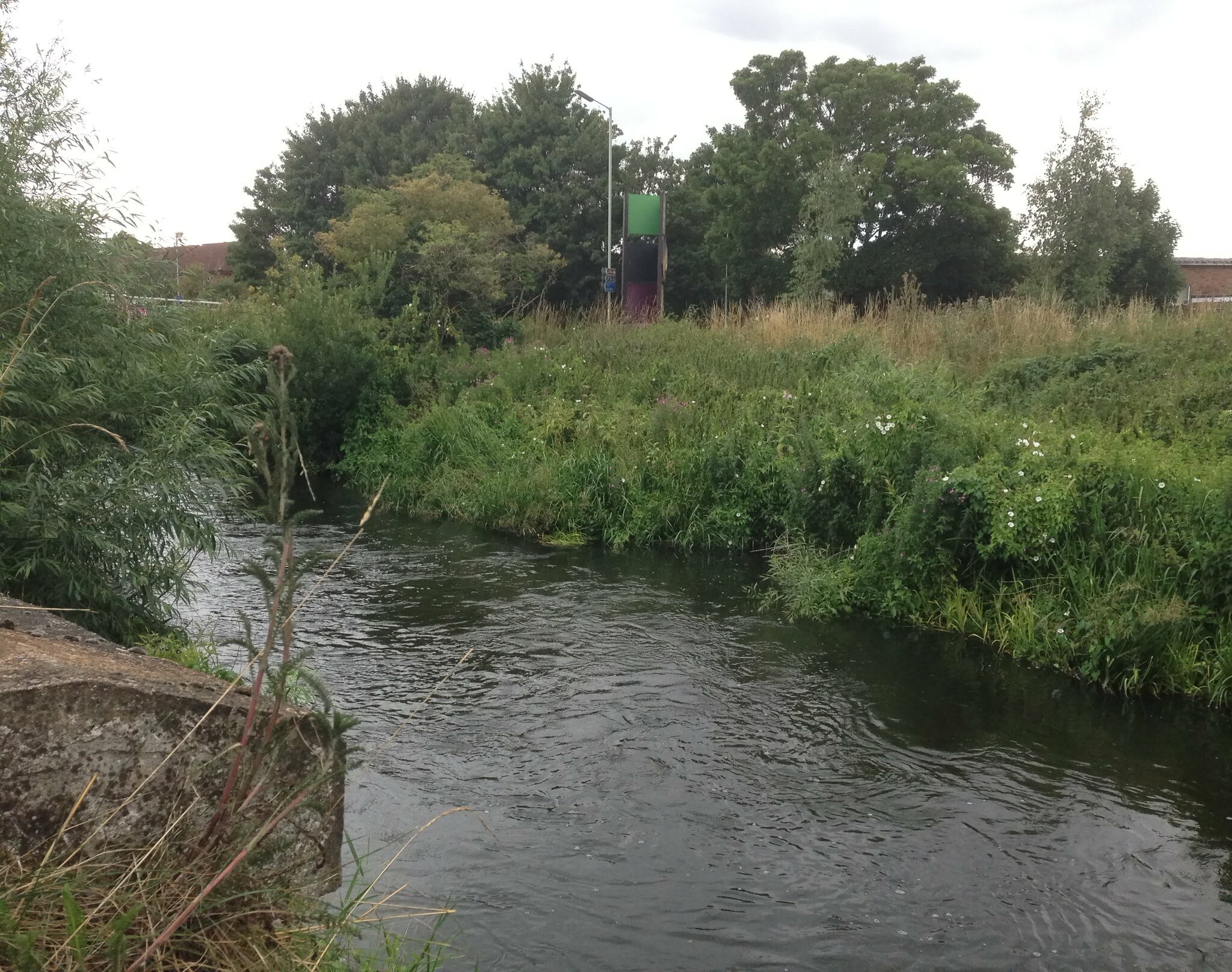 Scouting several spots I found a dark pool, its depth dark and inviting, feeding my imagination at what might be cruising in the shadow. Unfortunately while looking at a notice to check the day ticket prices I found to my horror the stretch was now season ticket, feeling a little devastated I had to quickly change plans; I didn't have £43 for the ticket, nor the inclination to pay that either as I doubted I would fish here enough to warrant the cost. 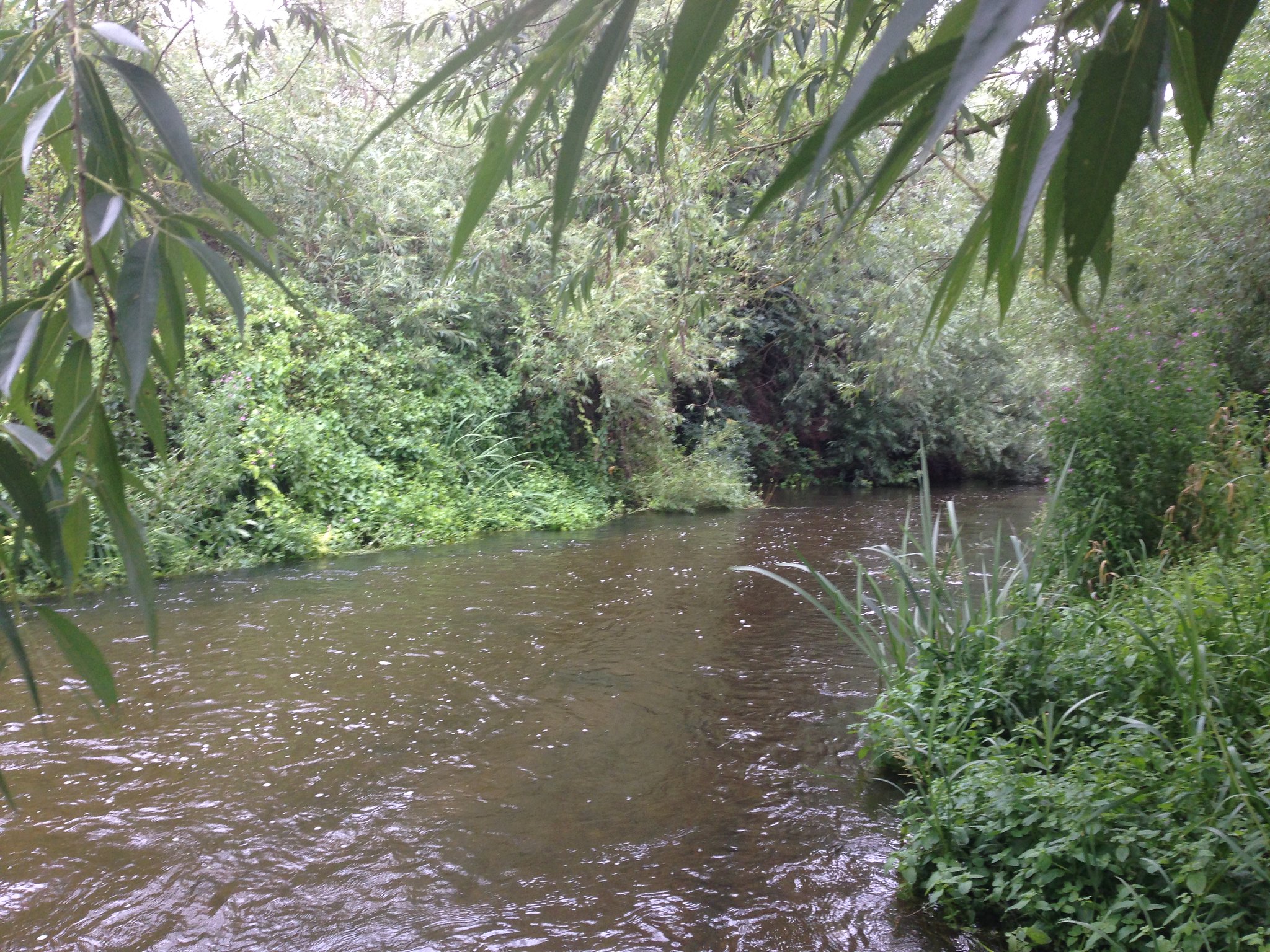 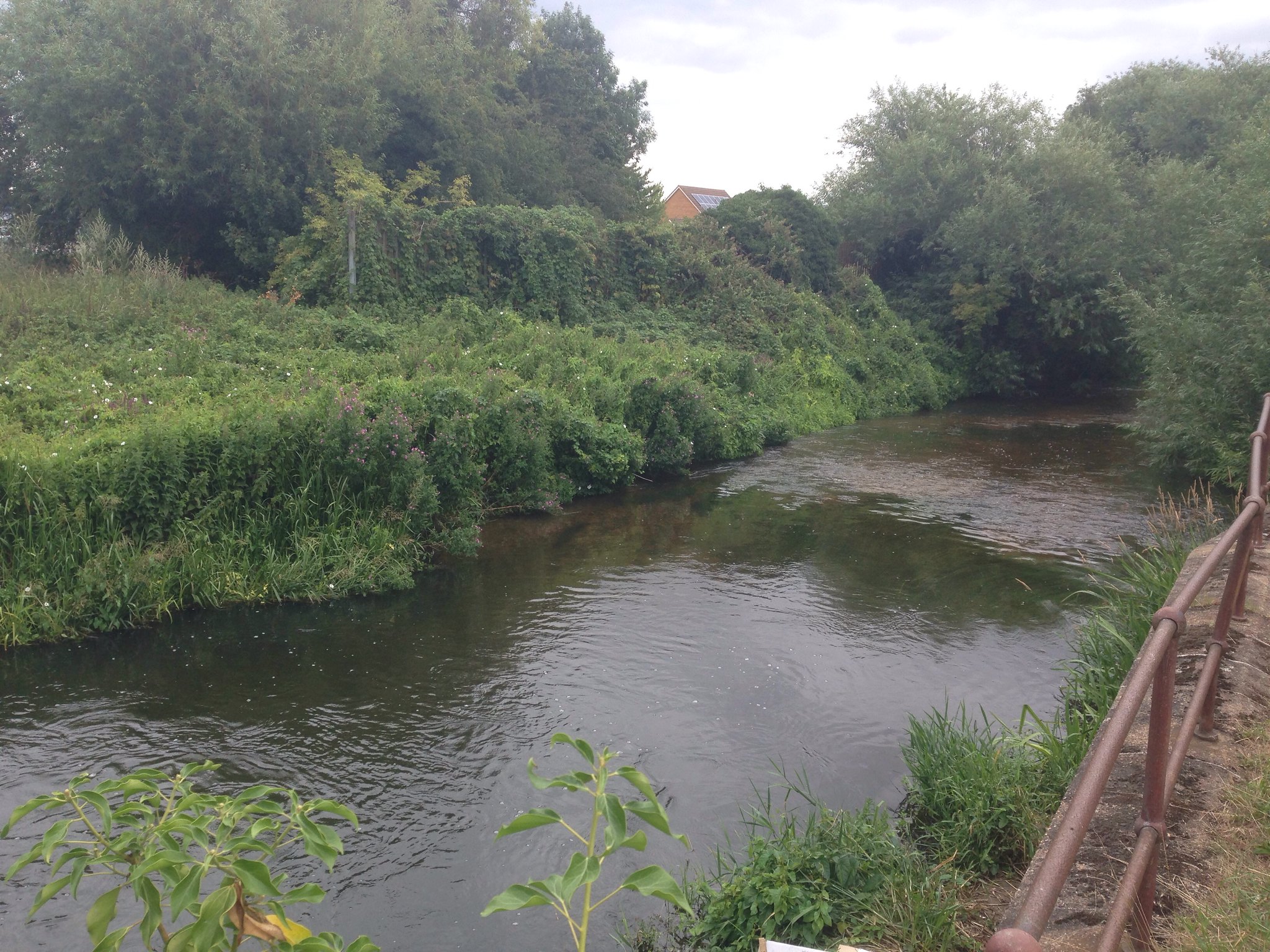 Tom was due to meet me in Bedford as he works nearby - a major reason for choosing the venue - I told him about the change of plans and I headed in the direction of our club waters. Knowing Tom would be a couple of hours behind me I headed towards the urban stretch. We fished there on Sunday evening during persistent rain and didn't fair particularly well although we didn't blank and I caught a rather nice brownie. Due to all the rain during the afternoon, on top of what had fallen over the last few days the river was coloured and became murkier during the evening.

Arriving at the river I was pleased to see clarity had returned with an increase in flow the river has been desperate for. Setting up with a Hends camou leader on my Lexa I headed towards the pool below a surface water outflow. I could see a number of dace, trout and the occasional perch and chub, nothing particularly big, the largest trout perhaps going over a pound.

As I set up, the surface became alive with rises, with the fish cruising around the pool taking invisible items from the surface. With this change in conditions I chose a size 20 CDC shuttlecock - simply tied with an olive dyed peacock quill abdomen, a tiny ball of dubbing at the thorax and finished off with a healthy tuft of CDC to keep it afloat. After missing a couple of speedy rises the first fish landed was a feisty dace followed by pricking two other fish, the pool went quiet after that so I moved on. 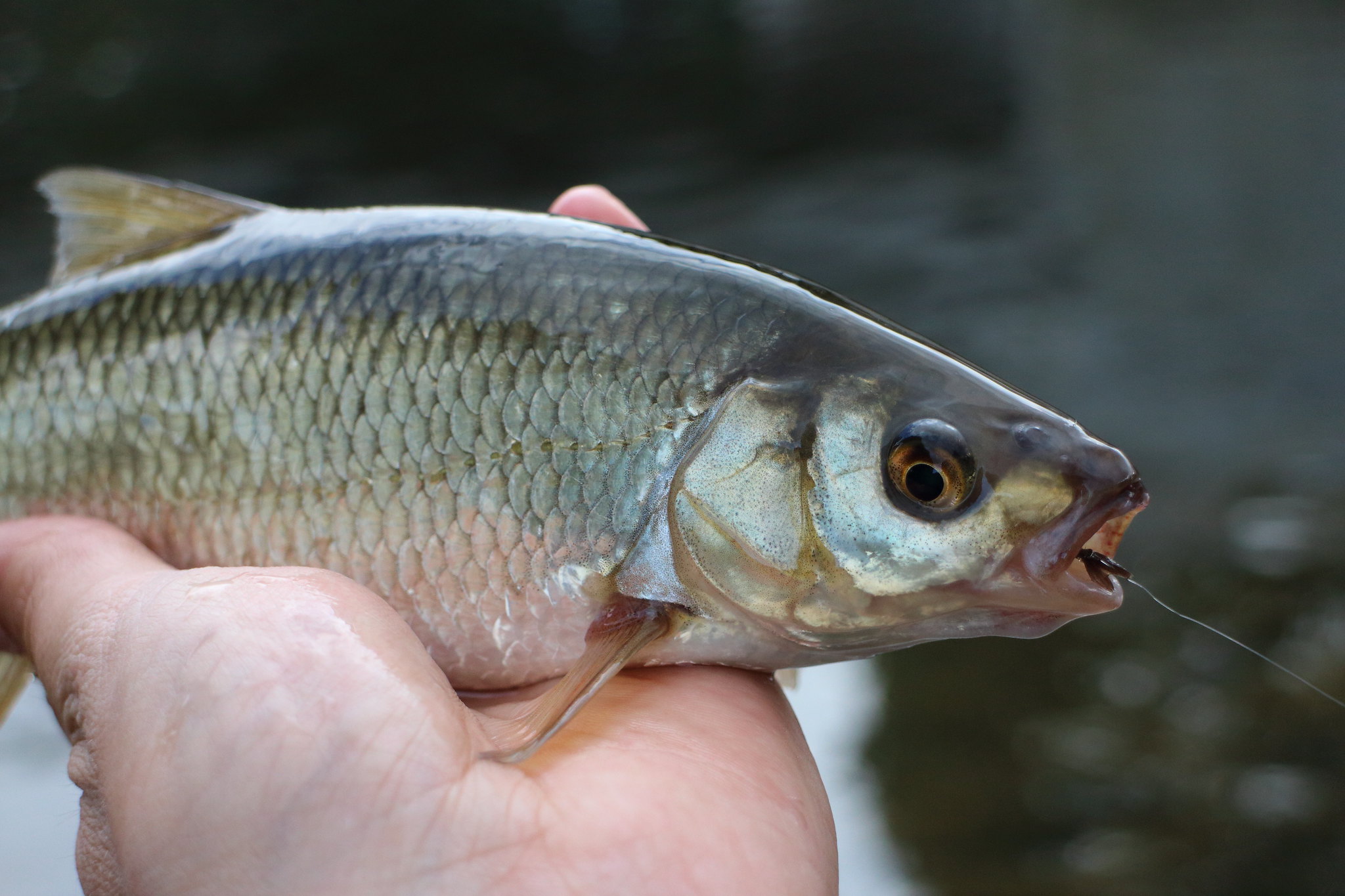 Next to the outflow a bridge spans the river, the water running below flows over a smooth concrete bottom - not known for its fish holding properties. A tall sloping weir ends directly above the bridge, many holes within the weir slope create upwellings at the base. I spotted a trout earlier in one of the upwellings while looking down from the bridge, it was big enough to have noticed. A few casts into the boiling water with a JP Pupa saw the indicator stop as it traveled downstream, a firm lift attached the fish to the line. Despite the shallow water the fish stayed close, using its power it tried the reach the safety of the hole at the bottom of the concrete weir, the Lexa subduing every lunge and surge. Once in the net I was left surprised at the size of the trout, great condition and a chunky handful. 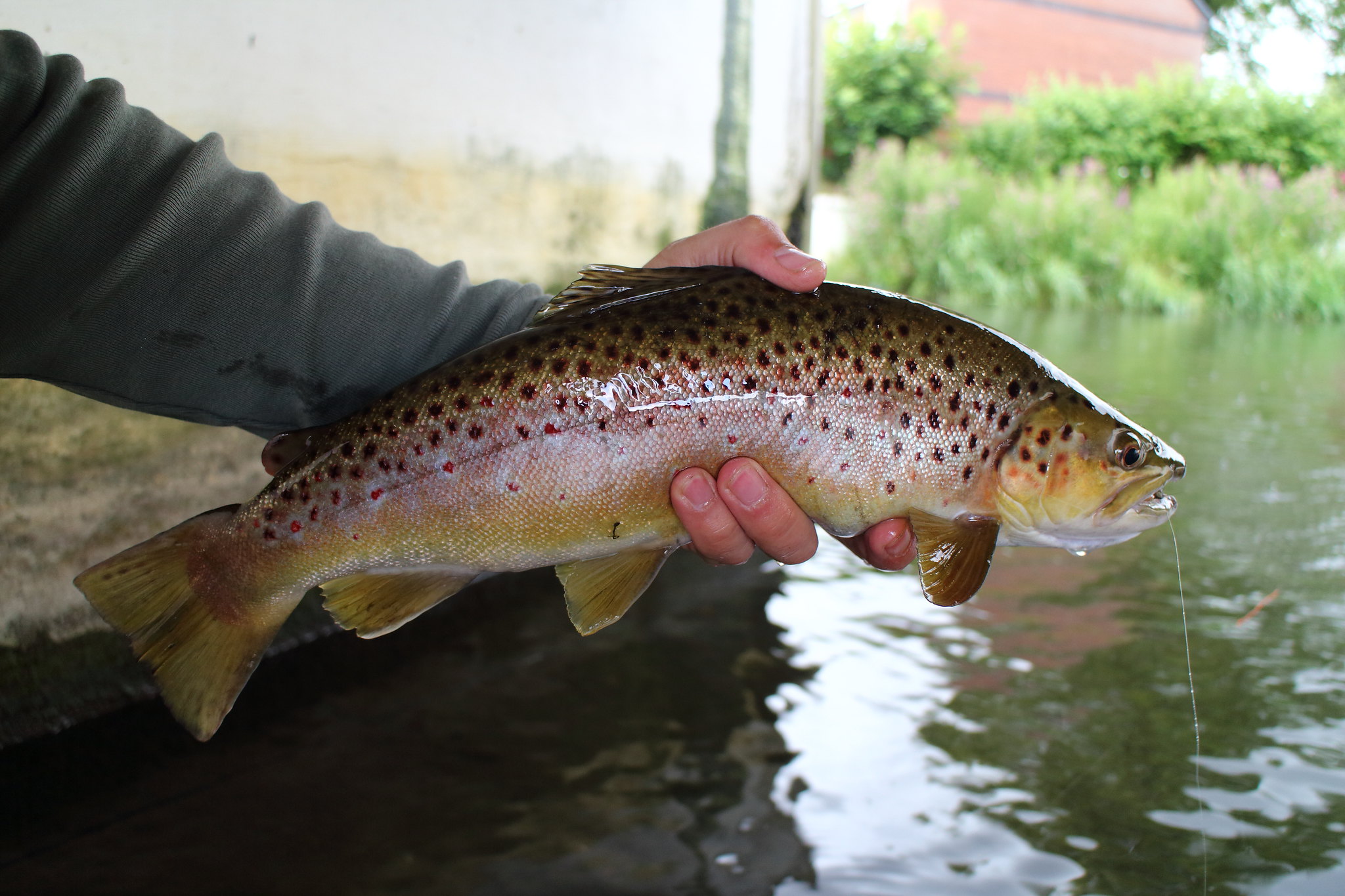 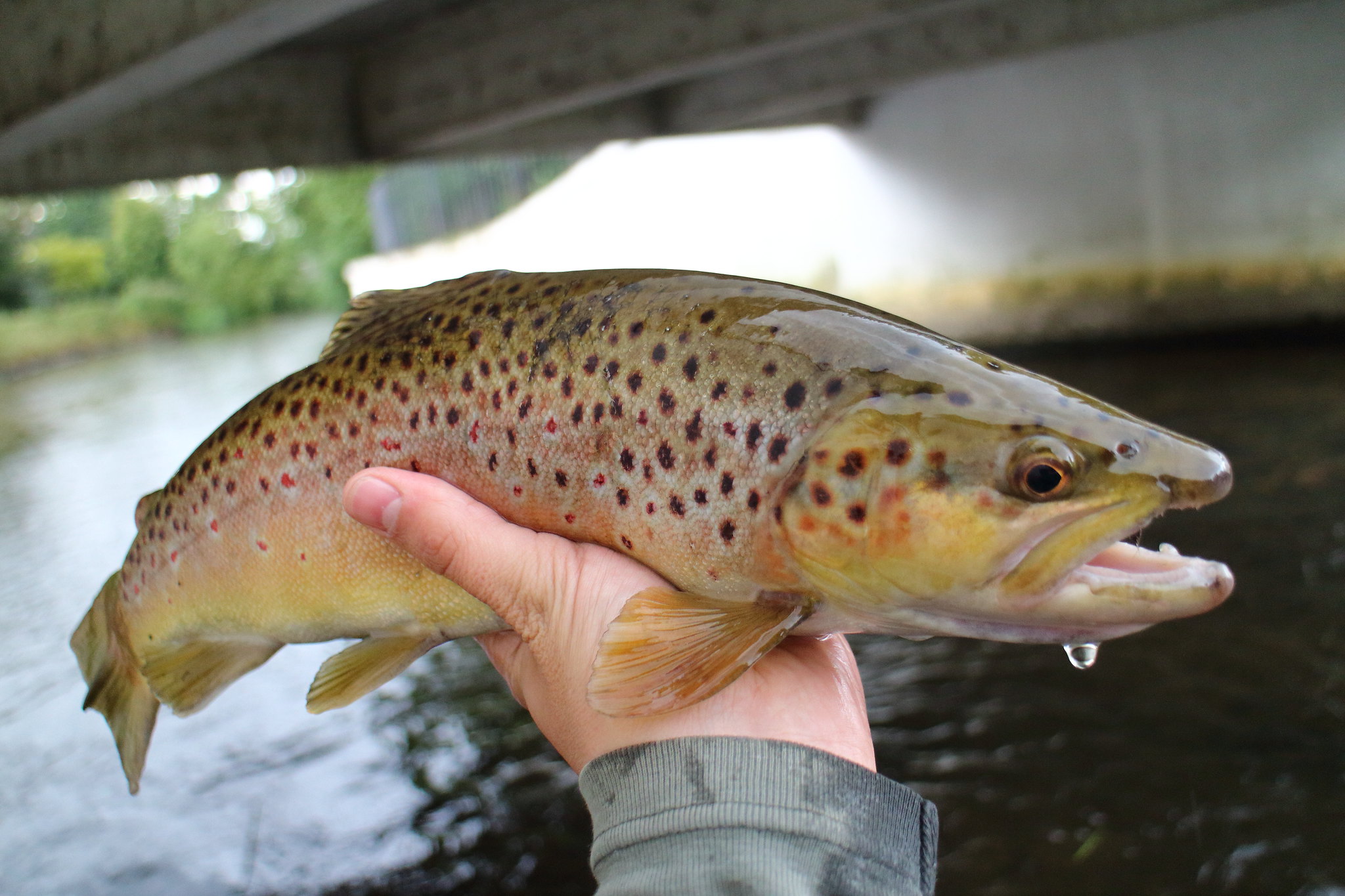 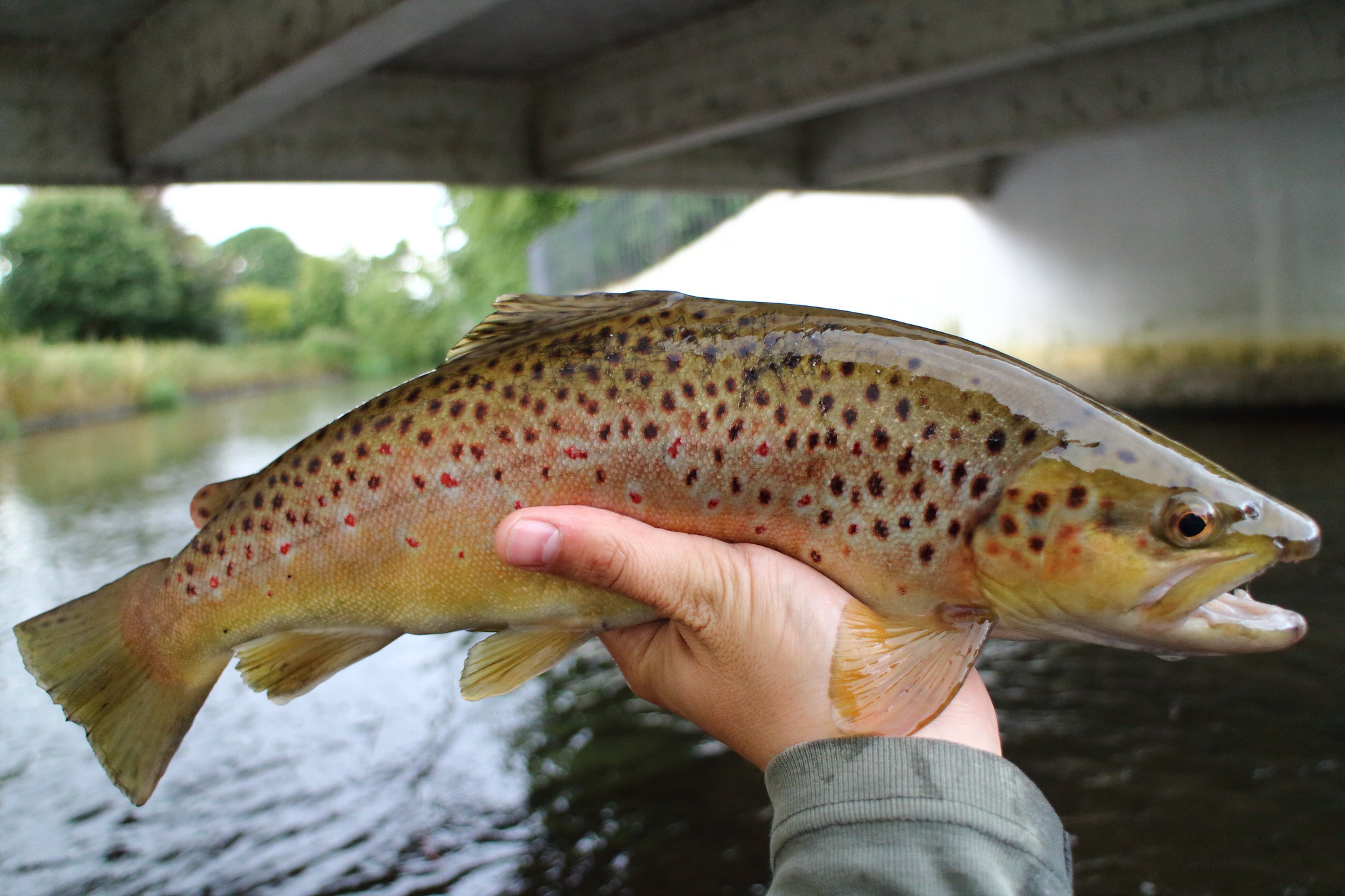 Above the weir the river is canal like, constricted within concrete banks, ribbon weed grows from the silted bottom - this is coarse fish territory. There used to be a great number of trout in this part of the river, many over four, five pounds, in the past I saw even bigger, those days long gone now. I could see quite a number of roach as well as a couple of chub and trout. I managed two roach before everything refused to look at the flies.

A Short Afternoon In The Rain 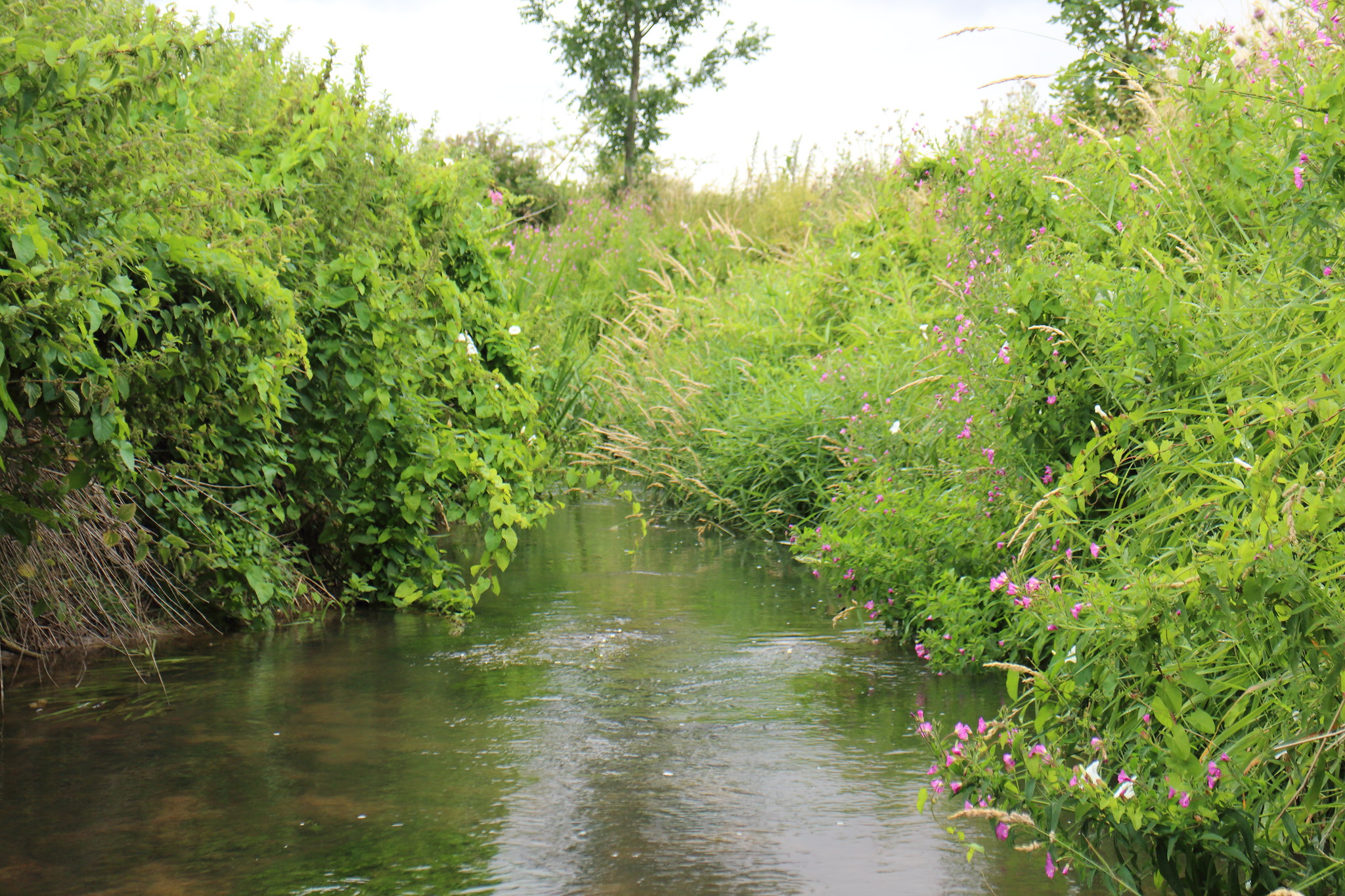 I finished work at lunchtime on Wednesday; after an almost shocking evening on Monday when Tom and I nearly blanked I really wanted to give a new section of river a real go.

The river is quite narrow here and the bank side vegetation encroaches on the water taking up more room. As I arrived it started to rain - the occasional shower drifted over during the afternoon - but thankfully it wasn't particularly windy allowing my to use my six foot two weight.

Due to the intimate nature of the river this far into the season I opted to keep things simple and nothing is as simple as a single dry-fly. I have found the trout to be free-rising, even if nothing is hatching. I've been so impressed this season by the effectiveness of Bob Wyatt's Deer Hair Emerger I find myself automatically reaching for a size twelve to tie on my tippet; it is fast becoming my one fly - for fishing in the surface at least.

I started above an almost impenetrable tangle of trees, ahead of me lay a tantalising run, clearer and more open than the rest of the river I fished. Tom hooked a lovely looking fish after we spotted it rise on Monday. A well placed cast in the same area saw my DHE confidently taken, much to my surprise it didn't turn out as big as I thought it was but nevertheless I was off to a start. I spooked a small fish as I walked upstream passing through a veritable jungle, certainly no chance of catching that, not with a fly anyway. 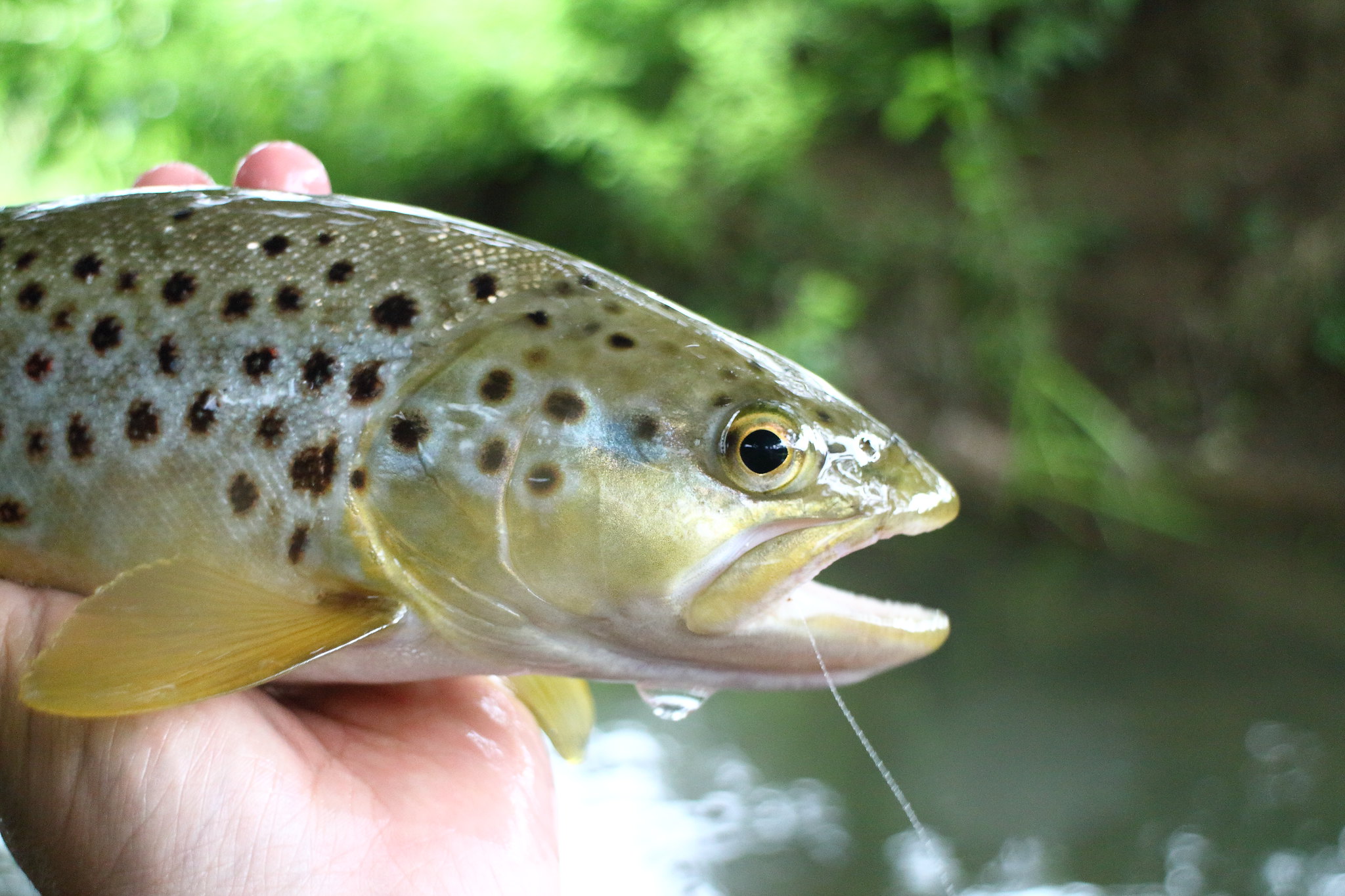 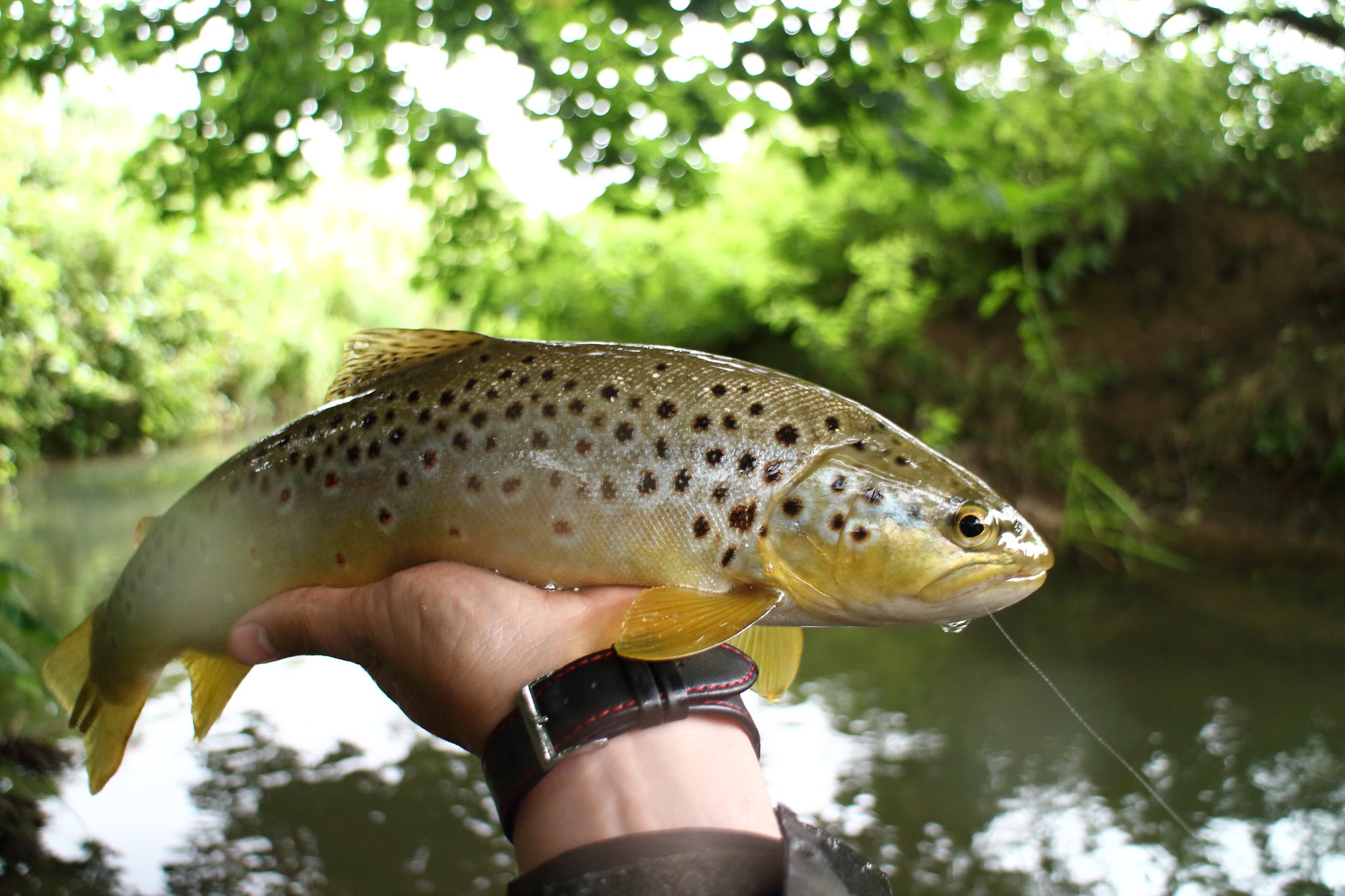 Passing under a rail bridge, a pool the other side underneath a sycamore had a couple of rising fish Monday evening. No risers this time but that didn't stop a feisty fifteen inch brownie from taking the fly. A quick couple of pics and I moved on round the corner. 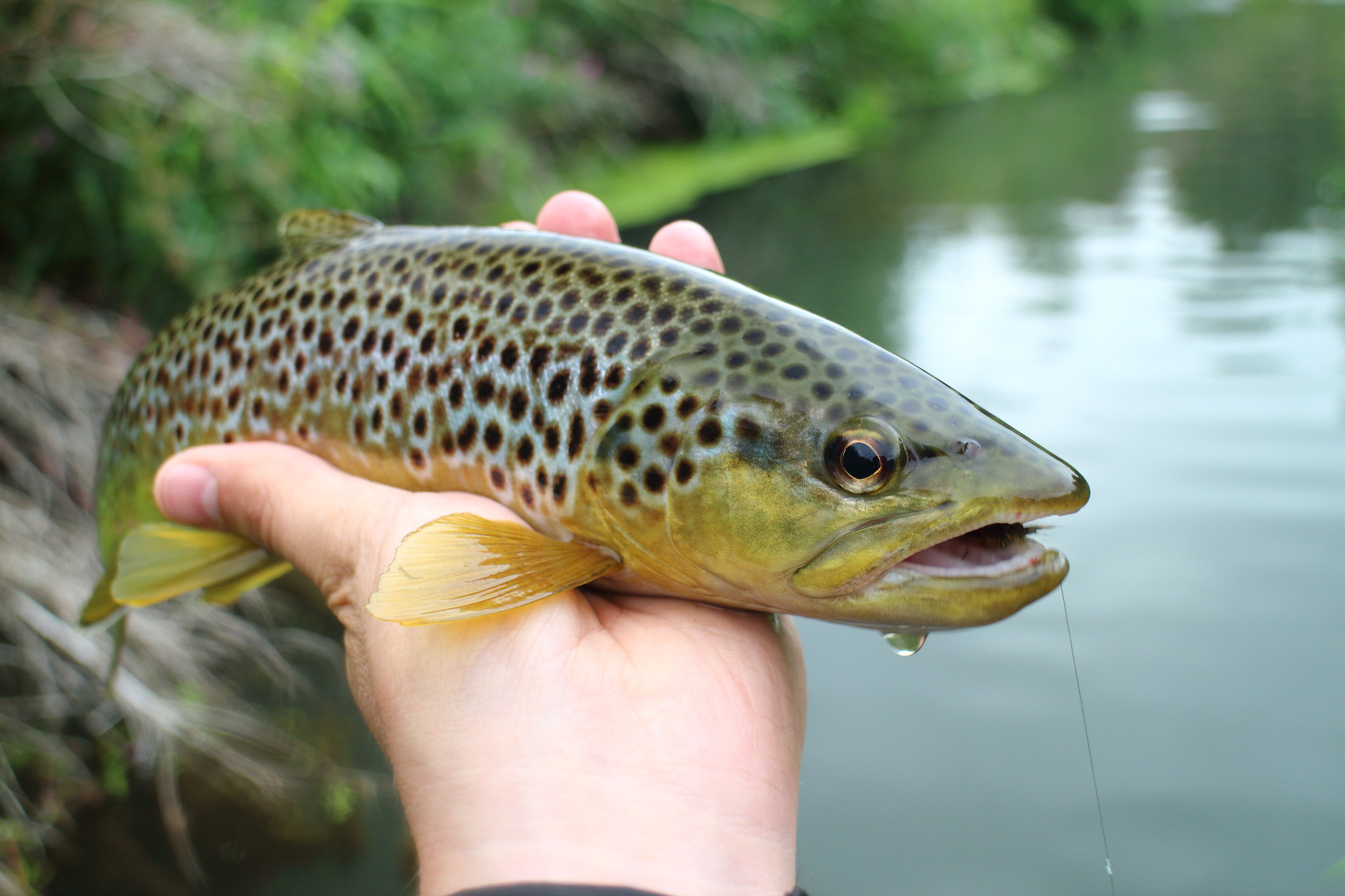 The river now set into a series of small pools and deep holes sectioned by short shallow riffles. Each little hole or pool generally relinquished a trout or two, but some failed to provide to the expectation given, maybe next time those empty spots will yield.

I fished for just over two hours and caught twelve trout, a rather pleasing result especially considering Monday's near disaster.
Posted by Ben Lupton at 22:06 2 comments:

A good fish leaves me puzzled

Here's and interesting one for you. A fish I caught on the 1st July is a repeat capture of a fish originally caught 15th May. I had measured the fish at 17" using measuring markers on my rod and working out the length at home with a tape measure; incidentally the trout weighed 2lb 6oz and was in great condition. I caught it from a small hole in and undercut bank with overhanging vegetation.


The place where I caught the trout yesterday is 250 meters upstream, which I guess isn't far in real terms, but still a long way from what could be considered a prime lie. It's new lie is a slow deep run with undercut banks either side as well as the expected overhanging vegetation. I hooked and lost a superb trout on the 3rd of June in the same lie, but I'm not so sure this is that same fish; the one I lost looked a lot bigger and I got several good looks at it before it broke off. My regular fishing partner Steve also hooked and lost a fish - the same one I think - and we caught that on camera.

I have tried to tempt this fish every time I have fished this venue - without success. Yesterday I found it feeding steadily on small items in the surface film. Not seeing anything in particular drifting past me.


Some footage of the trout feeding

I tied on a size 16 All Purpose Terrestrial. It only took a few casts to tempt it, having learned from my previous loss I kept the rod tip low, so low it was often underwater; it fought hard, though not as hard as the one I lost. It wasn't until I sent pictures to Steve that I found out it was a repeat capture - he spotted it of course, I didn't even think this would be a fish from downstream.

Using the measuring markers on my rod, I worked out at home it was 18 1/2", now I'm no biologist but it's safe to assume a trout is not going to grow an inch and a half in six weeks; strangely though the trout appeared to have lost weight and wasn't as plump as before - I need to refine my measuring techniques. 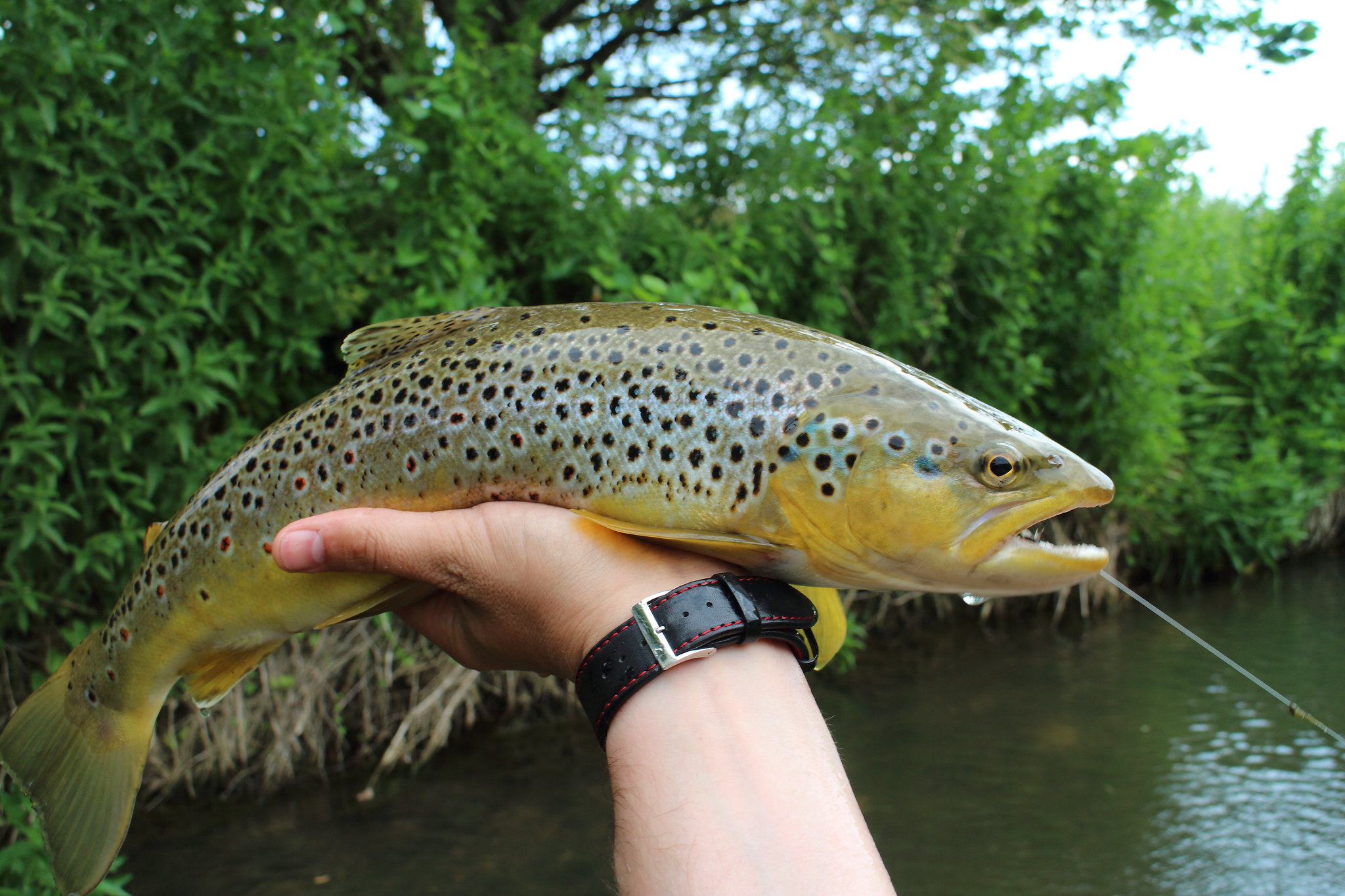 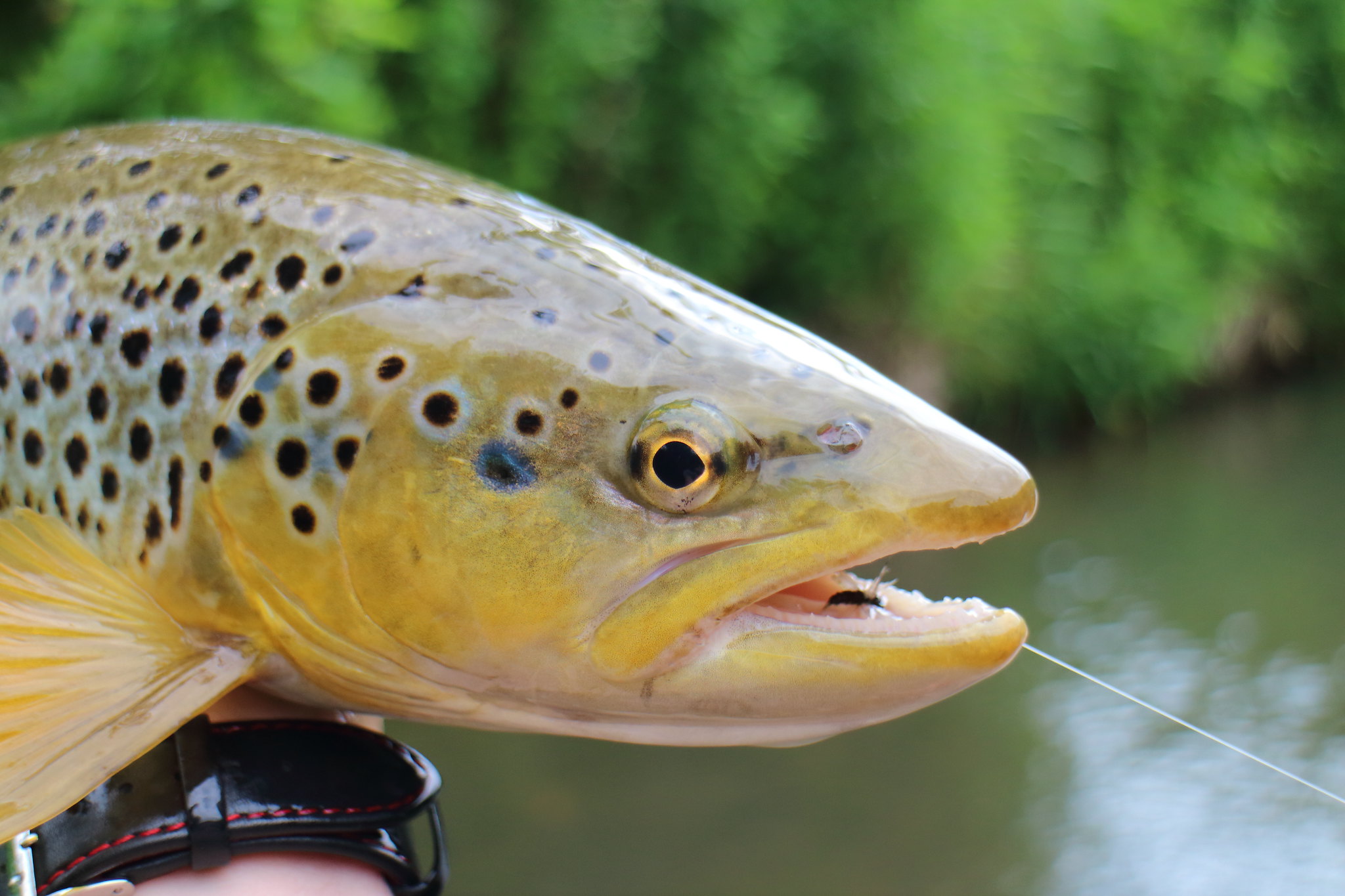 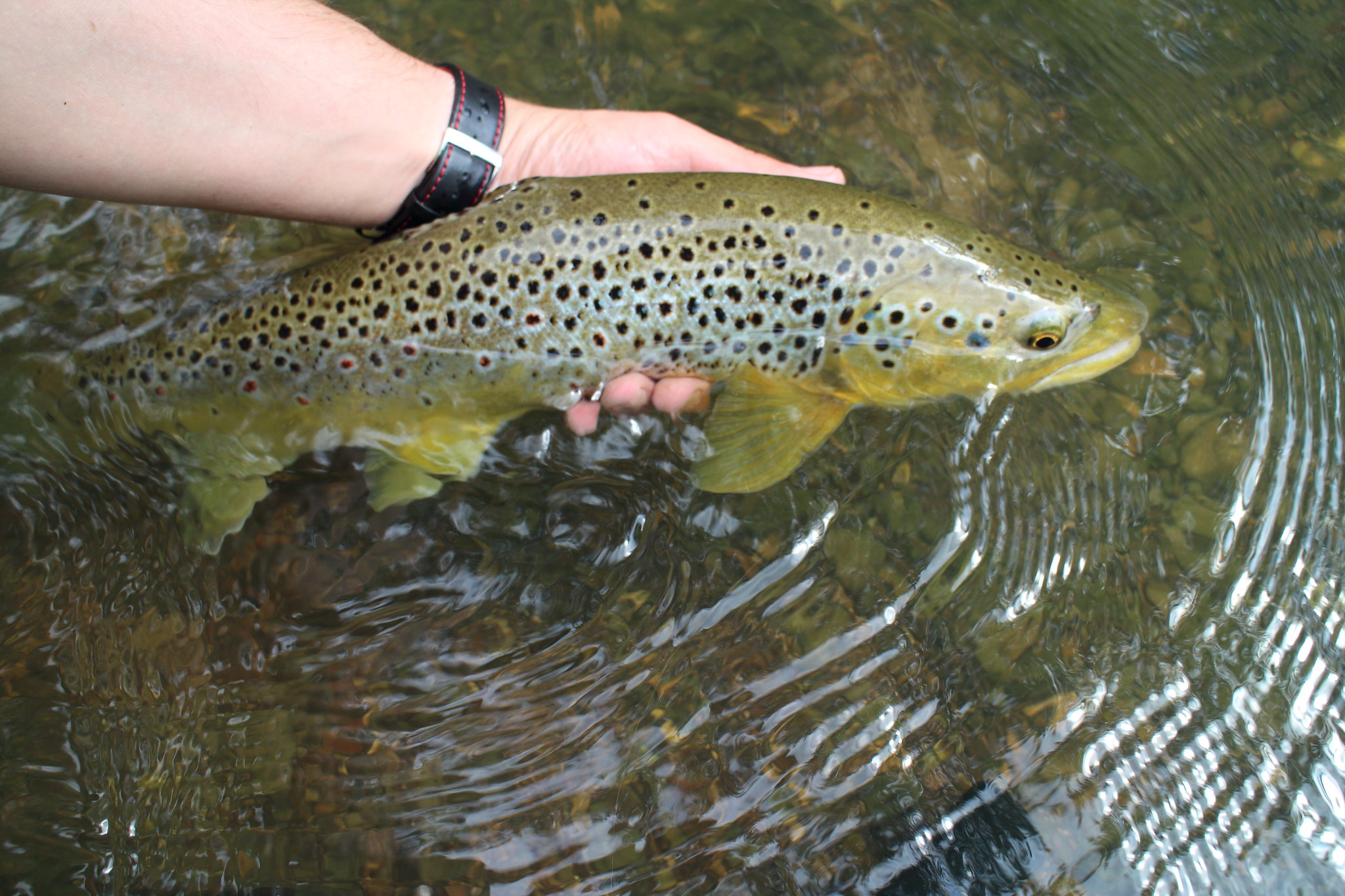 All that remains is to see whether this is the fish that haunted me or there is another, bigger one laying in the undercut.
Posted by Ben Lupton at 22:03 No comments: