My first trip of the season was closely followed by the second the day after. Forsaking my club waters I headed elsewhere, somewhere that should be clear even if it was running high and I was pleased to find my predictions correct. It was a much more pleasant day compared to Thursday, although it was overcast with a hint of mist, the wind had lessened and it felt altogether warmer; more April than March.

Walking through woodland I headed downstream to start on a section that usually proves fruitful, the river here has frequent small pools interspersed by riffles, the faster pace provides many opportunities to find fish with the ruffled surface helping keep the angler concealed. Arriving by the waterside I sat on a half-submerged log, recent rains helping to elevate the height and flow to levels I haven’t seen for a long time and at times the push of the current took me by surprise when I found an increase in added depth. There’s something quite enjoyable about sitting and taking your time to set up while observing the surroundings, I never rush, the extra time allows the inhabitants to settle and this normally means you can catch very quickly, if you’re really lucky first cast.

As the river can often be enclosed I rarely use anything other than an eight foot rod, either my Lochmor four weight or the Lexa nymph special three weight in its eight foot configuration, the choice always dictated by conditions and chosen method. In April a four weight is standard, unpredictable weather along with heavier nymphs means you need a line weight capable of delivering, there were times on Thursday when I felt a five weight was needed due to the gusting cross wind.

Opting for the double nymph again I elected to use a tuft of indicator yarn at the tip of the furled leader instead of using a furled leader with an indicator butt and tied on the same flies as the previous day, the increase in depth and flow in this river also necessitated the use of even heavier tungsten beads with a three millimeter bead on the point fly and a two and a half millimeter bead on the dropper. I have absolute faith in copper beaded pheasant tail nymphs, it has become such a staple it rivals and in the early season surpasses the use of my favoured JP pupa which comes to the fore when caddis become more prominent as the season progresses. It’s funny how attitudes and opinions can change over time as I’d written in a previous blog post about preferring to use and tie more complicated semi-realistic patterns whereas now with time being more precious I opt to use simpler patterns that are no less effective and which allow me to tie a couple of dozen in an evening instead of half a dozen; a much better use of time.

The beaded Wiltshire's baetis nymph is a new addition to my fly box and it came about because I had a selection of silver tungsten beads without an obvious pattern to use them on and thought the baetis nymph would suit either the silver or a black bead - I already have plans of which hook to use when tying some black bead versions. The plain baetis nymph has already served me well, I caught a two pound plus grayling on my trip to the Dorset Frome and a number of trout when I have used it. I saw no reason why the addition of a tungsten bead should change its effectiveness, but it does mean it can be fished much deeper.

As I was setting up, I caught a glimpse of a goshawk I had seen recently when walking around the woods before the season start, I have a fond interest in falconry so to see wild birds of prey does excite me, I've been fortunate to have watched the majority of easily seen birds of prey in my part of the country, but the goshawk is right up there, hopefully I will manage to get a worthwhile picture at some point.

Unbelievably I caught second cast,  a well conditioned trout of around ten inches gave a good account of itself in the strong current, a good omen I thought and the baetis nymph did its job,. I have fished this section before and almost caught a fish a cast when working up the run, it wasn't quite that good this time, in fact it was much worse, I fished up the run without another take, this was odd. Happy with my fly choice I simply changed flies to change bead size, I was worried the flies were not getting down in the deep fast flow. It was a little while until the next fish came along, this time to the PTN and the third fish took just as long to follow. 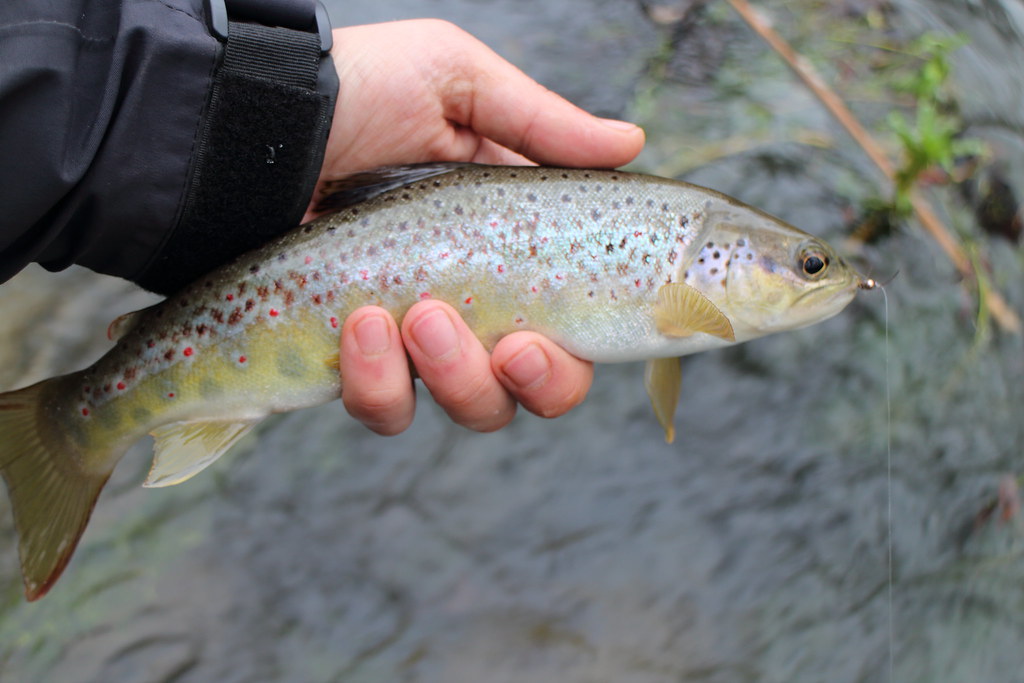 Snagging a tree forced me to retie my tippet and I took the opportunity to change tactics. I had seen the occasional olive hatch off and although I hadn't yet seen a rise I was hoping as the day progressed they may start to look up. Although I hate that I use the klink and dink set up far too frequently, it is just such a devastating method on the small rivers I fish, if it was the only method I could use I wouldn't feel too restricted by it. As it happened my catch rate improved drastically, I can't really explain why, it could have been a combination of the nymph being presented at the right depth or that I had found an area that held more fish or that as the day advanced on they began feeding with more food items becoming active, but whatever the reason I caught over half a dozen fish from a pool located on a bend with an overhanging yew tree.

Carrying on upstream most of the productive areas where the deeper slower areas, the trout hadn't moved into the shallower riffles and faster runs and productivity was intermittent as I found areas and sections that held feeding fish; I missed a couple of takes to the klinkhammer as I was taken by surprise. I caught several sighted fish and some skillful angling led to a fish that took me under a fully submerged branch; I allowed the fish to run taken the fly line through the branches and thankfully it wedged itself in a thick clump of ranunculus, this gave me time to weave the rod tip under water releasing the line and I reconnected with the trout and safely landed it, not a big fish by any means but I do enjoy catching sighted fish no matter what the size.
I had decided to call it a day and headed back to the car when walking past a productive but difficult pool I spotted several good sized fish holding near the bottom. The rod was already broken down and I umm'd and ahh'd while still watching the fish trying to size them up as the occasional smooth patch of water flowed down the pool giving me chances to see the bottom better. It was earlier than I had anticipated on leaving so the decision was made to cross the river and set up in the cover on the opposite bank, hoping this would give the pool sufficient time to settle before I tried extracting its occupants. 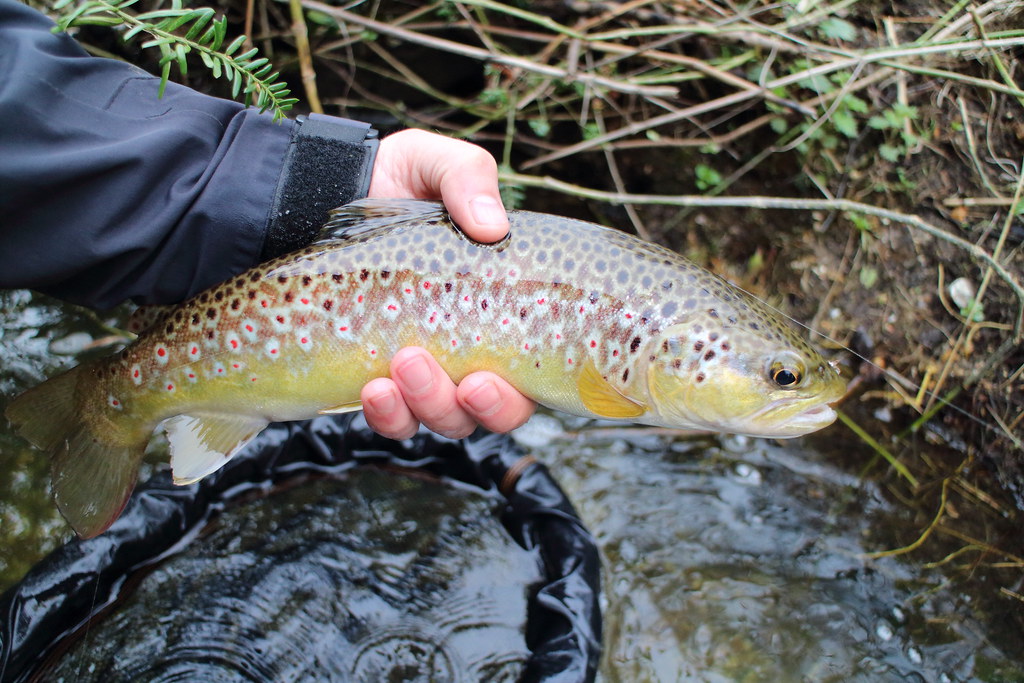 I returned to the double nymph and indicator yarn and the tow flies from the beginning of the day. slipping into the river there was ample bank-side cover to hide my approach. Within half a dozen casts I was latched on to one of the larger trout I had seen, I love the sight of the rod hooped over as a quality fish tries its best to lose its link to you. For the first time that day I uncoupled the net as I readied to land the fish, this was a good fish, not huge but a fair size for this river which is more about numbers than size. After a short rest a took a few pictures and released it facing downstream, it skulked as the current took it downstream and I returned my efforts to the pool. 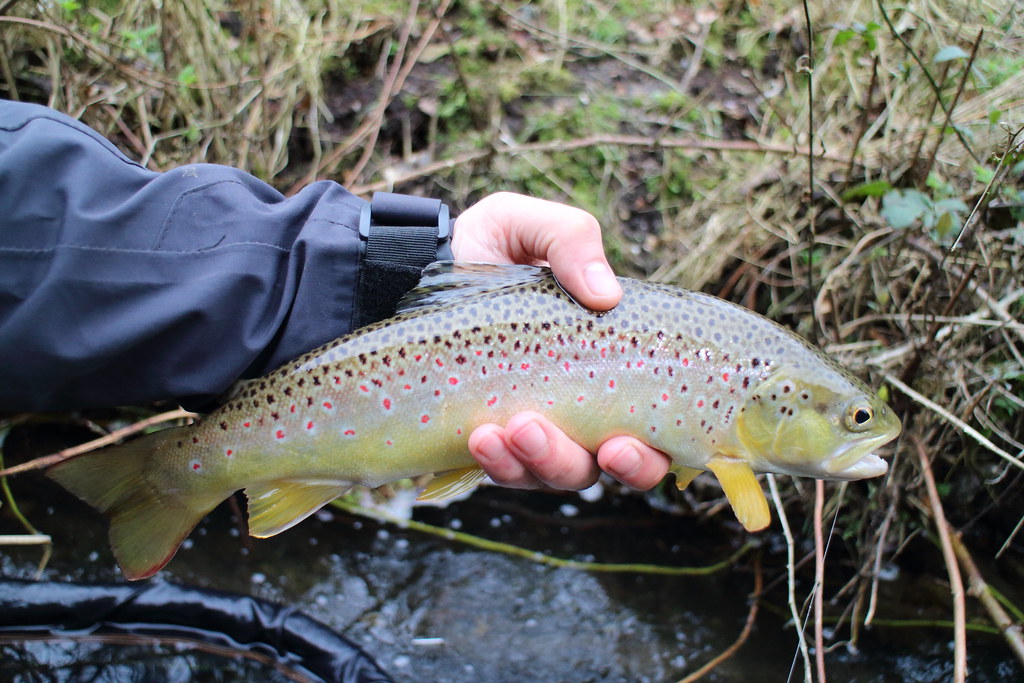 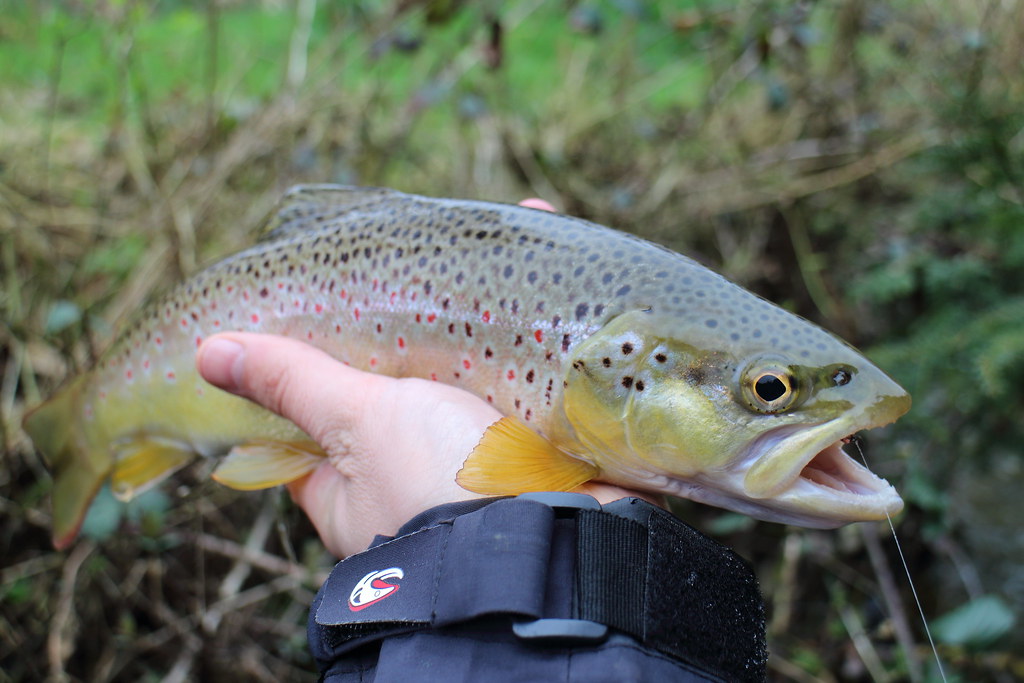 I fished this pool for half an hour as fish after fish came to my net or hand, both flies were taken and it appeared that I had timed it well, a small number of olives were hatching and it seemed as though the pool was switched on, this was the most productive I have ever found this pool, normally two or three fish is it but I had around eight fish before calling it quits as time had run out for me. This was how your season should start. 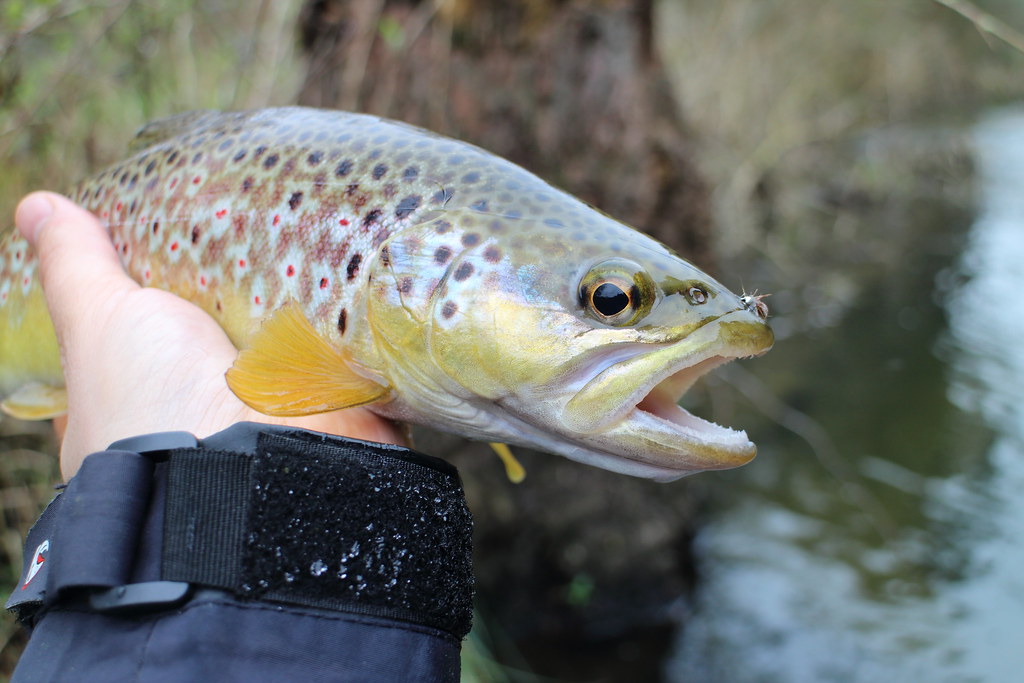