So where have I been fishing during the last two years? Well there have been two trips to the Don in Sheffield, more specifically one of the tributaries, the first time was with Tom and Steve joined me a few weeks after. When Tom and I fished we went as a party of five; Myself and Tom drove up from East Anglia and Mike and Jon travelled a much shorter distance from Cheshire and picked Danny up in Sheffield. The initial meeting at Owlerton greyhound stadium was the only point in the day when all five of us were together; Tom and I did meet up with Mike later on in the day on the main river. This was the first time I had fished this trib, Tom fished with Danny the year before as part of the five-rivers challenge when he won an auction lot provided by Danny on behalf of the Monnow Rivers Trust. Tales of that day captured my imagination as although they didn’t quite achieve the goal Tom told me of the excellent sport provided by the little river that day.

A short walk from where we parked took us over a bridge on the main river – it’s always uplifting to see rising trout early in the day and I pointed a good-sized fish stationed behind a boulder close to the bank. We started our day directly at the confluence, looking upstream the trib looked so inviting if a little clear and low, the gradient was immediately obvious as the river tumbled down small chutes and riffles into the occasional pool, little rivers like this are just my thing – I’m not afraid to admit larger rivers are intimidating to me, but only through a lack of experience on them, small rivers and streams are my undoubtedly comfort. 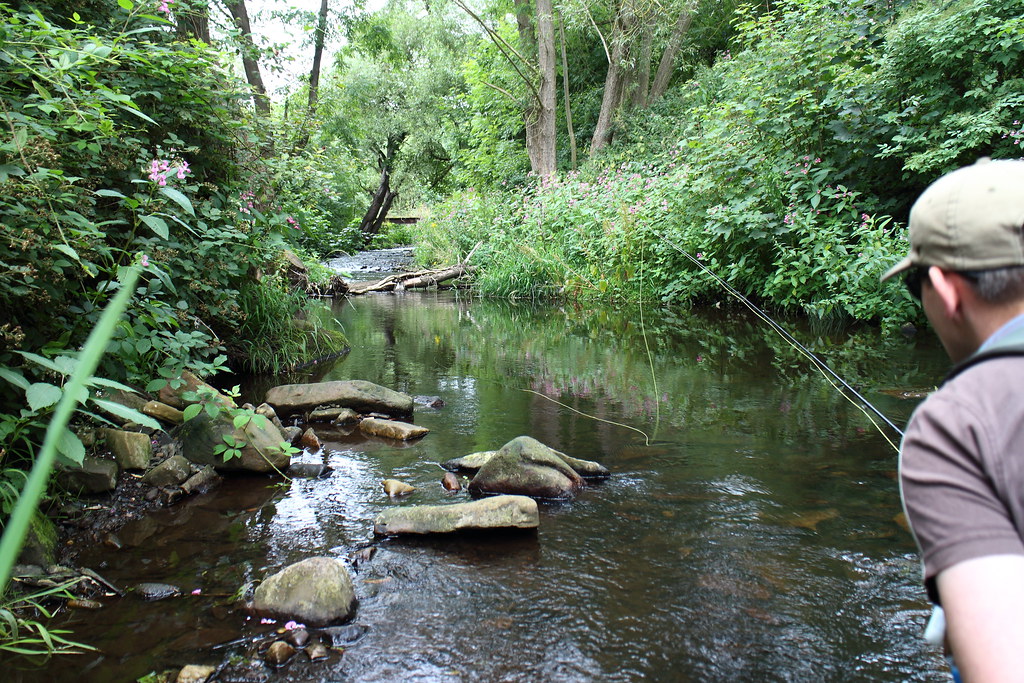 The first pool was deceptively deep for such a small river, the current syphoned through a small channel and under a large tree trunk spanning the river. There were a number of rising just off the main flow on the seam with a large section of still water. Tom succeeded in capturing one of the rising but the remaining fish from that pool took the nymph; we were using the ubiquitous klink and dink of course. Actually what is normal when I fish with either Tom or Steve is that we both set up our rods differently, one will be set up with a klink and dink and the other, which is usually a Lexa is set up with a French leader and a couple of nymphs. This suits our style of fishing which is to take turns in catching fish, or fishing a pool or run each depending on the day, this is what I call fishing with someone rather than two people turning up and separating to fish different areas. 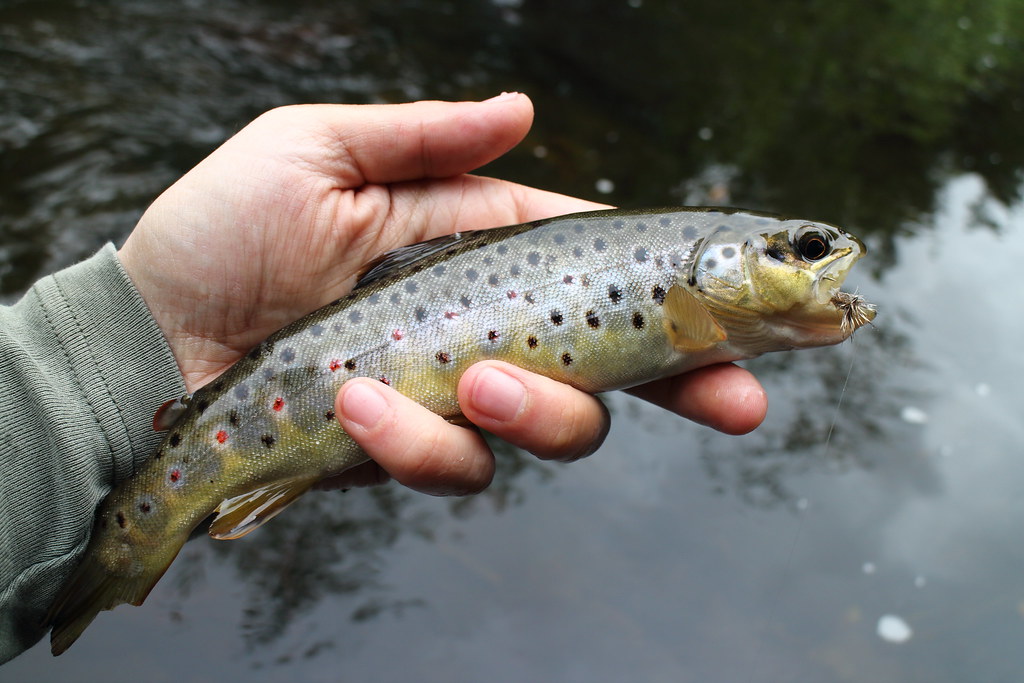 The day carried on with both of us catching steadily as we continued up the river changing flies and tactics where needed. One slower paced run was lined with rising trout and chub taking midges off the surface. Paul Procter’s All Purpose Terrestrial and a diminutive black klinkhamer caught us several trout, but neither of us could deceive the chub, some which were comfortably two or three pounds – spooky fish. Walking through a shallow riffle I disturbed a very large fish that was holding in some very smooth deep water below a road bridge, there is nothing more disheartening than seeing a substantial bow-wave speeding upstream. A slow heron-like stealthy wade through this section took us almost through the bridge’s tunnel, a lively run flowing down a concrete embankment on the nearside meant we waited a few minutes to allow any disturbance to subside. Within a few casts Tom hooked a big trout, we both saw it as it swam past Tom close to the surface before somehow shedding the hook; Tom let out a devastated shout, that trout looked easily over two pounds. Carrying on we caught several more trout before reaching the next pool. 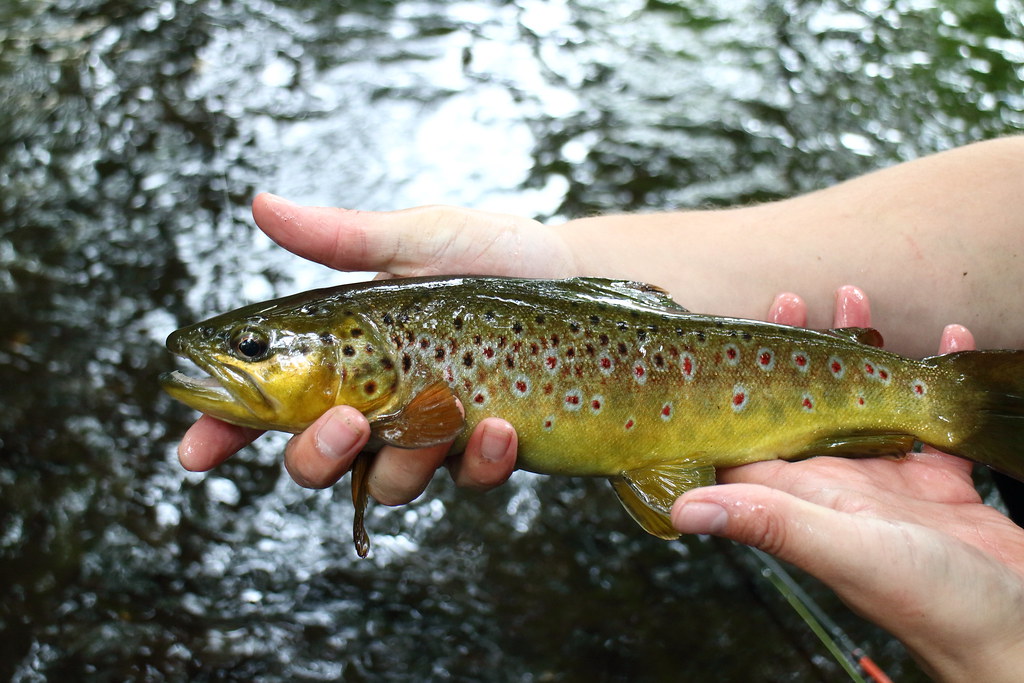 We were a little envious of the owners of a house who’s balcony overhangs the river at the next pool, although not large it was a typical pool in dynamics and absolutely stuffed with fish, it was in this pool we saw grayling for the first time that day - they are present throughout the lower section of the river, only a large sloping weir prevents their range from expanding, but they are not as populous as the trout - unsurprisingly we caught a good number of fish but the large grayling in that pool eluded us. 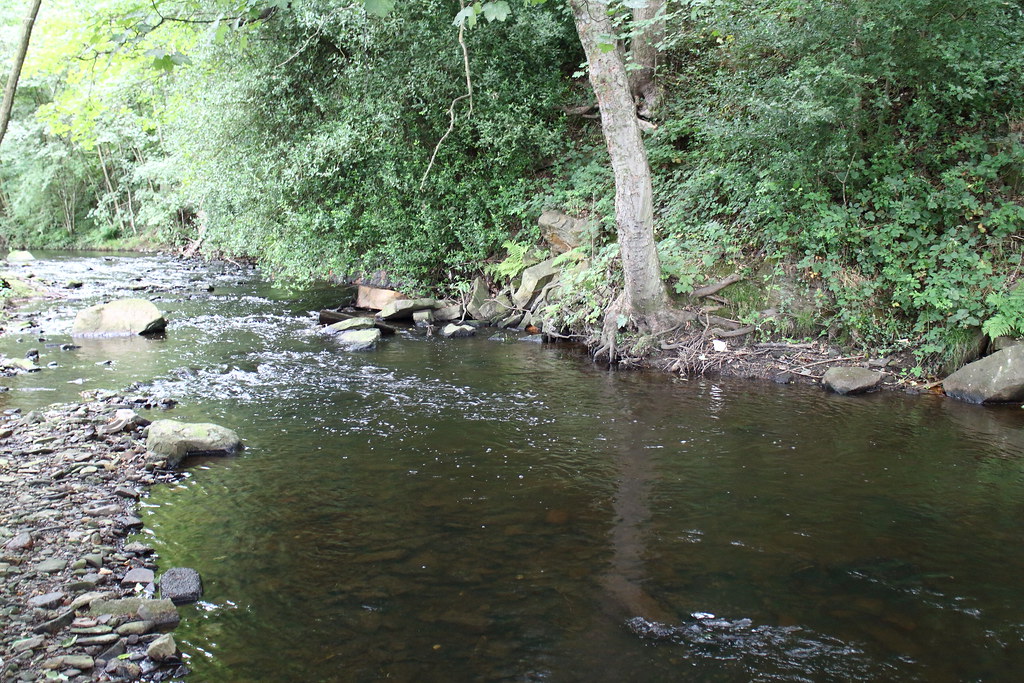 Further upstream I hooked a good trout of around a pound and a half as I guided my nymphs underneath the tightest overhanging tree I have ever fished, I also think because of a lack of room I failed to set the hook properly and despite playing the fish for a length of time it came off after one somersault too many, I was gutted now we had both lost a good fish, that said it showed the calibre of fishing available in this little river.

The river tumbled over and between some large boulders immediately upstream of the pool I had just been fishing and Tom took the honours of catching the days smallest fish here. The largest pool so far on the river sat above the pocket water, the drop between that pool and the one I had fished was some four foot, it was very noticeable when looking ahead. This pool provided a lot of action for Tom, he landed a nice grayling, the biggest of the day – not that we caught many, in fact I don’t think I caught one – most of the fish were found directly at the point where the river bed dropped almost cliff-like at the head, we didn’t attempt to wade the main body. 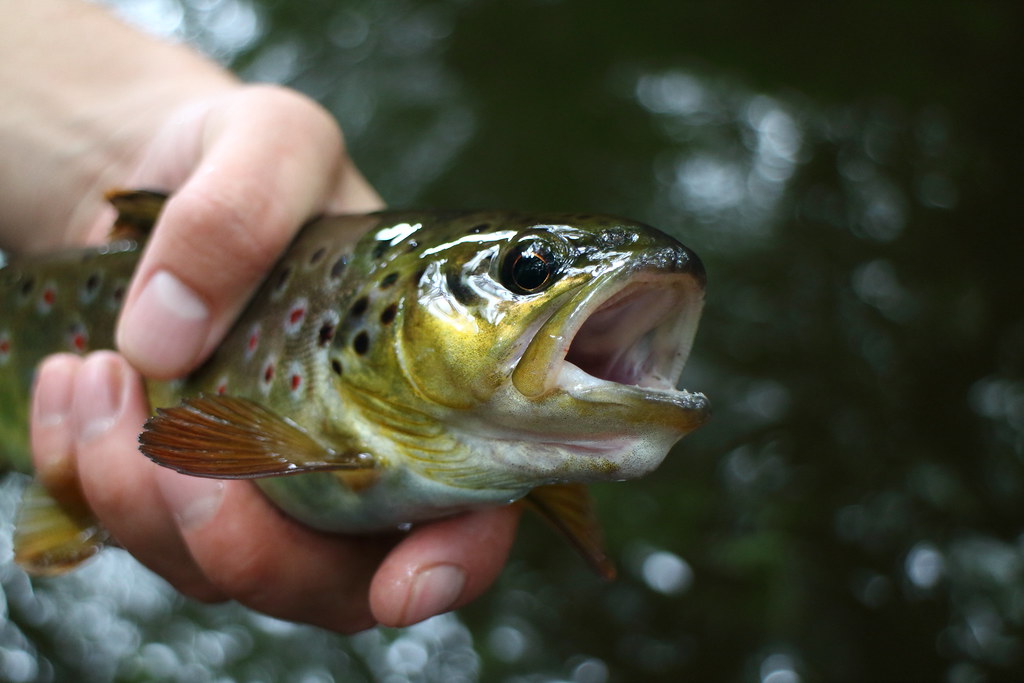 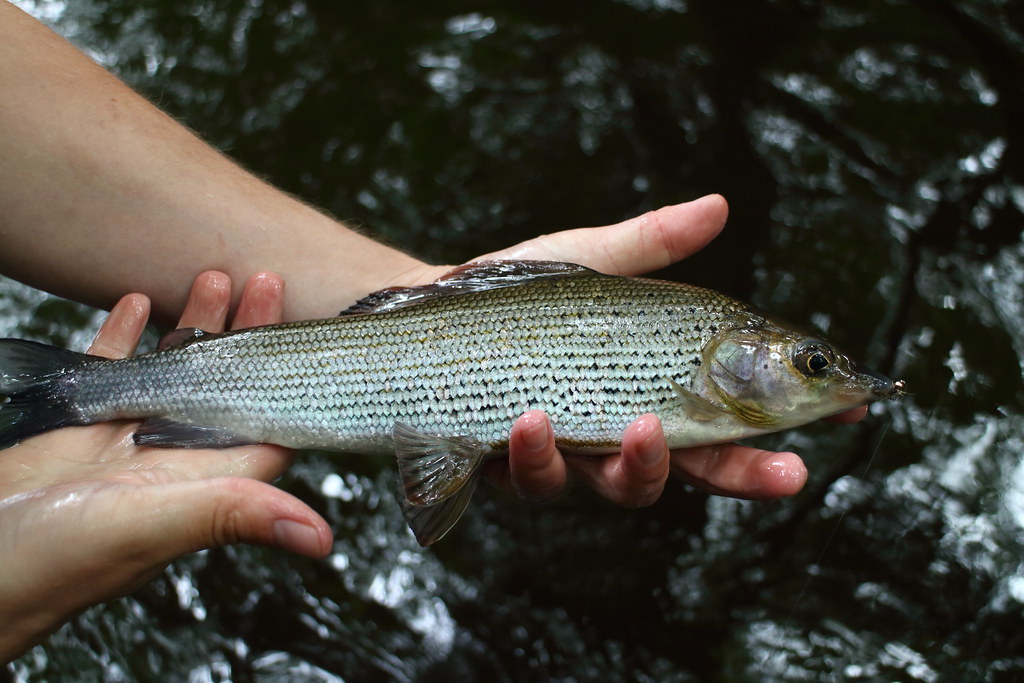 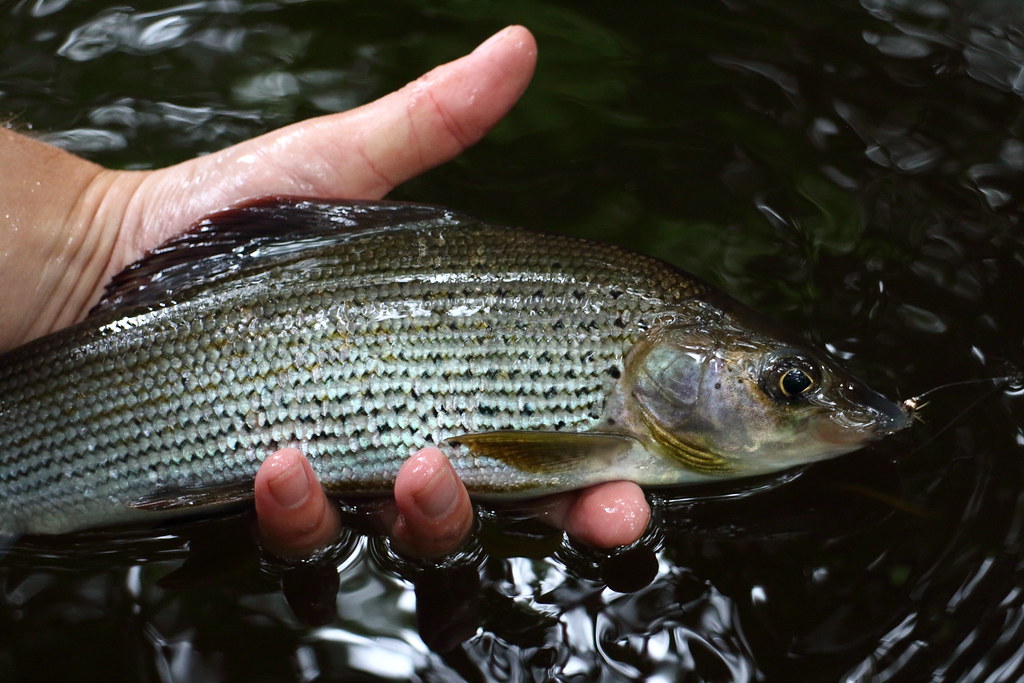 We carried on a little further catching fish on the way, I forget our total but when we reached the long weir we had caught a considerable number of fish especially in tough conditions, I’d expect when conditions are optimal with an increased volume of water and a slight tinge  the numbers you could catch would be staggering, in fact I know this from the numbers Tom and Danny had caught last year in a much shorter time frame. We left the tributary at around three to meet up with the others on the main river, it was only Mike that we met up with, Jon and Danny were further upstream. I won’t lie, we struggled on the River Don, the river looked in good condition but we struggled to catch many fish and reports from Mike confirmed it had been a hard day for him, this made Tom and I more thankful for our choice on venue for the majority of the day.

Two weeks later I fished the same little tributary with Steve. There had been quite a bit of rain in the days leading up and the levels looked good, the sight of the main river saw our hearts sink, looking over the bridge we were greeted by a fuller river that ran the colour of watery hot chocolate – had we driven for two hours for nothing. Luckily the little trib was largely unaffected, an increase in flow and water volume as well as a small amount of colour lifted our hearts back up and really raised our expectations for the day. 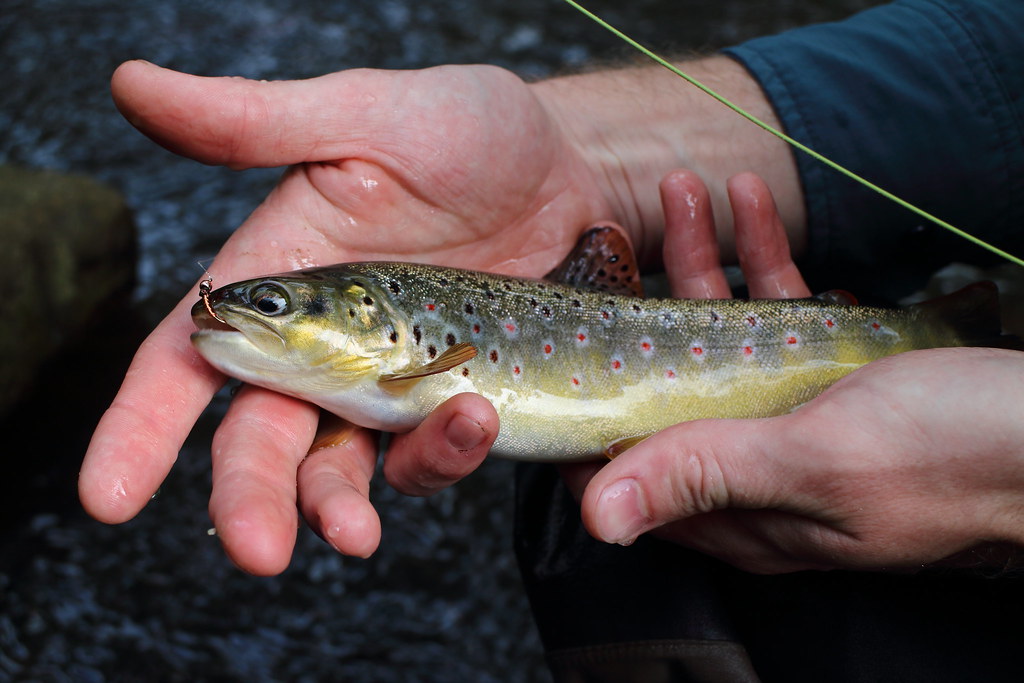 Fishing in much the same way as I did with Tom we caught steadily throughout the day but surprisingly some areas where I expected to catch more because of the better conditions failed to produce any fish at all. There were no big fish hooked or caught although we did see the group of fish below the bridge, some thought needs to be given as to how I’ll go about catching one, which is difficult as I’m not a local. The only thing different that Steve and I did was go much further up the river, more to explore as we didn’t really fish that efficiently by the time we got that further up. 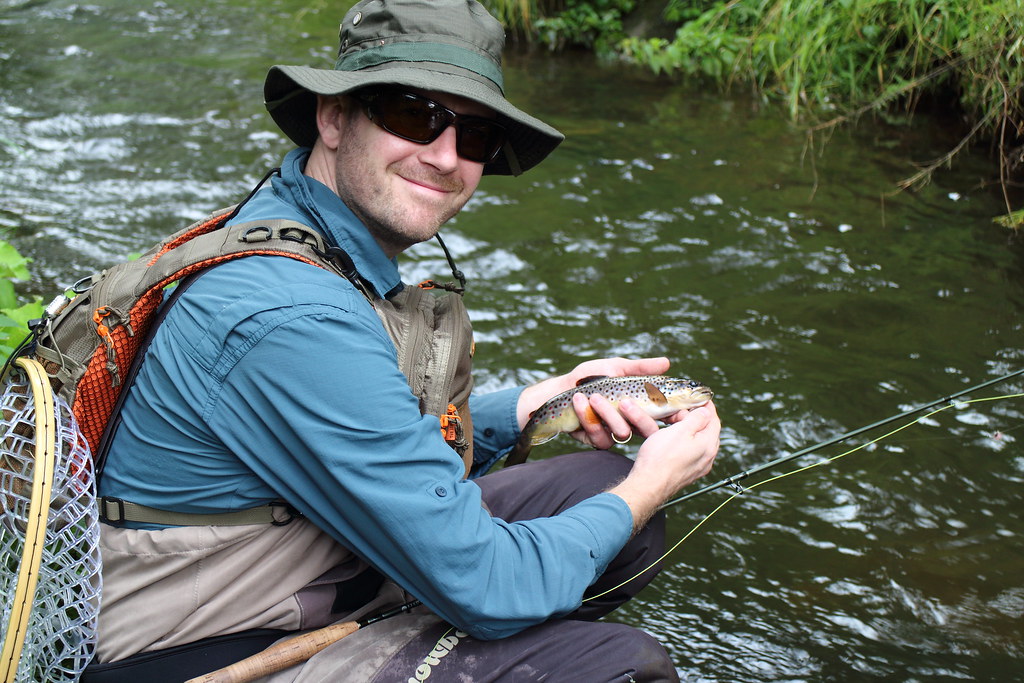 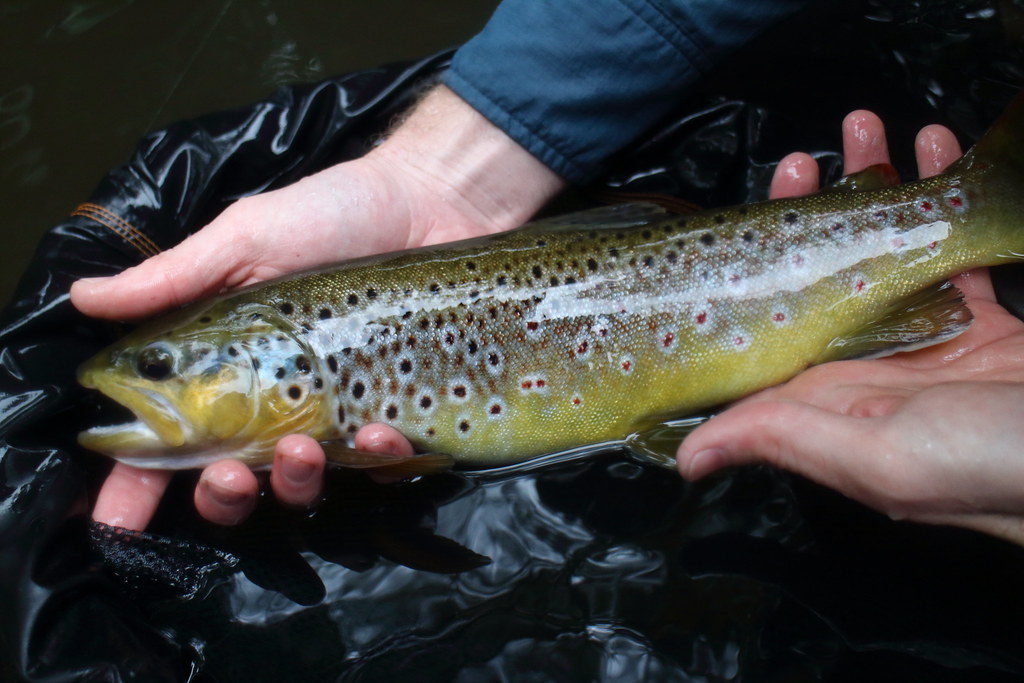 I also had a couple of trips to the coarse sections of my club river, the large trout that we found last year haven’t been visible, at least when I have been, that’s not to say they haven’t been around. As usual the grayling and coarse fish provided most of the sport, trout of all sizes were conspicuous by their absence and the few I did manage to hook did an impressive job of tangling the fly tine and leader in over hanging vegetation as they cartwheeled around the river, only a couple of smaller individuals were landed.

This leads me to some very exotic fishing, for me at least, but that is another post........